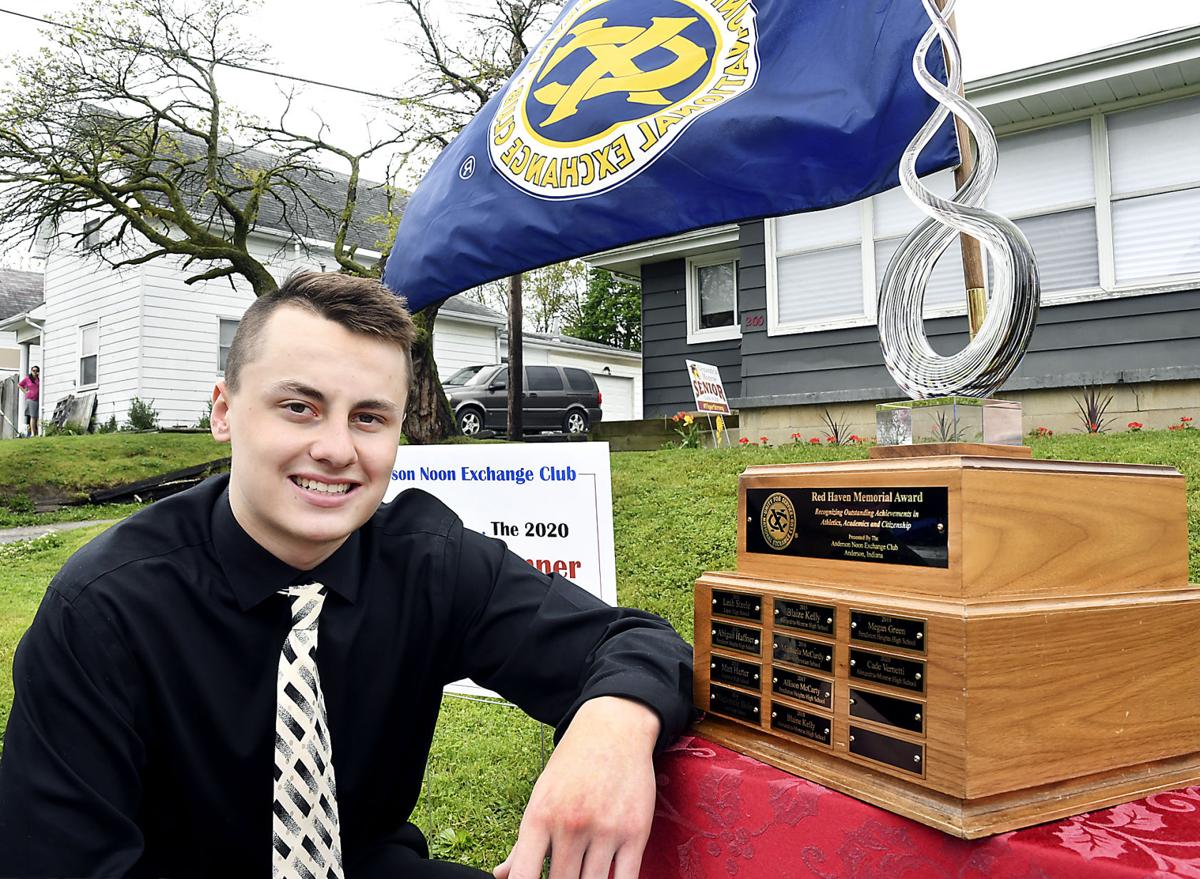 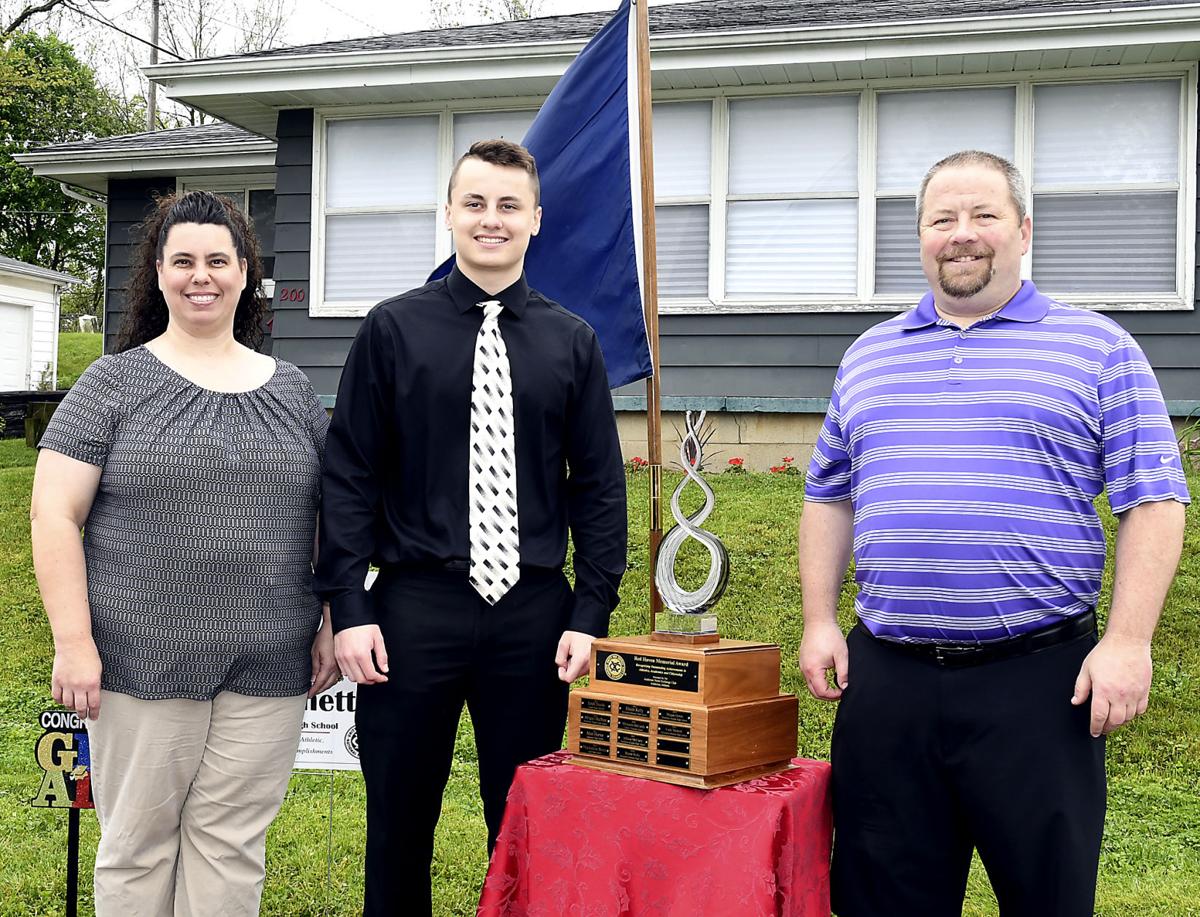 Cade Vernetti of Alexandria-Monroe High School was named the 2020 Red Haven Memorial Award winner. Cade is shown here with his parents, Dannae and Greg Vernetti outside their home during the award presentation by the Anderson Noon Exchange Club on Tuesday. 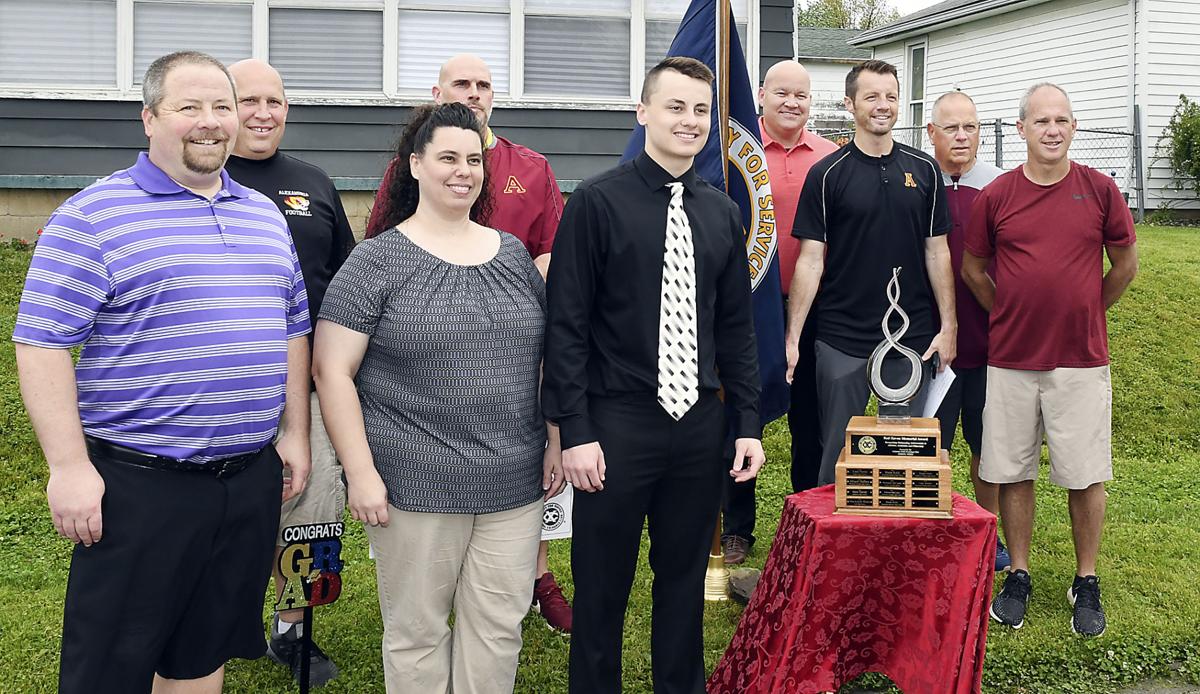 Cade Vernetti, center, of Alexandria-Monroe High School was named the 2020 Red Haven Memorial Award winner. Cade is surrounded by his parents, Greg and Dannae Vernetti, front left, and his Alexandria coaches and staff members during the award presentation Tuesday.

Cade Vernetti of Alexandria-Monroe High School was named the 2020 Red Haven Memorial Award winner. Cade is shown here with his parents, Dannae and Greg Vernetti outside their home during the award presentation by the Anderson Noon Exchange Club on Tuesday.

Cade Vernetti, center, of Alexandria-Monroe High School was named the 2020 Red Haven Memorial Award winner. Cade is surrounded by his parents, Greg and Dannae Vernetti, front left, and his Alexandria coaches and staff members during the award presentation Tuesday.

ALEXANDRIA — As one onlooker noted, “This is the Heisman Trophy for area athletes.”

Combining a highly accomplished athletic career with an exemplary scholastic track record, Alexandria’s Cade Vernetti was named the winner of the 52nd Red Haven Award on Tuesday as presented by the Anderson Noon Exchange Club.

The ceremony was conducted at Vernetti’s home, rather than the annual banquet, due to the ongoing COVID-19 pandemic.

“I knew who all was nominated, and I really didn’t think it was going to be me,” Cade said. “Everybody had a really good chance, and when I was told it was me I said ‘What?’ I was just shocked, but I’m blessed and honored to have won it.”

Vernetti is the 11th recipient from Alexandria and the third in the last six years, joining Blaize Kelly (2015) and Blaine Kelly (2018) as the most recent Tigers winners.

In terms of athletics, few have accomplished what Vernetti has.

He has earned 11 varsity letters in three sports — four each in baseball and football and three in basketball.

On the court, he was part of a sectional championship in 2019 and the school’s first Madison County title in 2020.

In 2019, he was the starting center fielder for the baseball state champions and finished his high school football career holding multiple school records, including for receptions, receiving yards, touchdowns and interceptions.

He has been selected all-state twice and all-conference three times and was awarded the THB Sports 2019 Football Defensive Athlete of the Year, WHBU’s Football Player of the Year and Alexandria’s Bus Sizelove awards and plans to continue his football career at Indiana Wesleyan, where he will study exercise science.

“In general, I think God blessed me with the talent to drive for success,” Vernetti said. “I just worked as hard as I could and finally put it all together. Freshman year I was kind of slow because I was small, but I worked hard, got bigger and it all worked out in the end.”

During quarantine, that commitment has not slowed down. Vernetti said he has gained 25 pounds of muscle as he prepares for next year.

In the classroom, he was nothing short of excellent. A 21st Century Scholar, he will graduate with a 4.277 grade point average and academic honors. He is second in his graduating class of 108 students.

“The biggest thing for me was that I didn’t do any of the things I shouldn’t have been doing or could have done,” he said. “I didn’t go to any parties or do stupid things. I would hang out with my friends occasionally because you have to have a social life, but it’s all about balance.

“Balancing your working out, your classes and, no matter how late it is, you have to get your stuff done. Even if it’s midnight, it always paid off because I’d be ahead on my work or I’d be ready for a big test.

He is a 2019-20 Madison County Athlete of Character and is a member of the National Honor Society, SADD, Spanish Club, Prom Committee and Balance, which helps prepare students for life after high school.

“It’s really important to prepare us for college,” he said of Balance. “It’s a great program. It’s really going to help me for college. I really just learned, when I was making my college decisions, I was really influenced by some of the things we talked about.”

Orville “Red” Haven was a valued member of the Anderson Noon Exchange Club and a past club president in 1958. He was the sports editor of The Anderson Herald until his death in 1969. He thought very highly of high school athletes in Madison County, and his sports columns carried their achievements and recognized the individuals who not only excelled in athletics but took time to be excellent students and be highly involved in their community as well.

It is in his memory that the Anderson Noon Exchange Club chooses to honor a high school senior who embodies these attributes.

Originally slated to be the guest speaker at this year’s banquet, Carl Erskine sent prepared remarks to congratulate all of the finalists.

“Red acknowledged talent comes in all shapes and sizes,” Erskine wrote. “We all have different abilities. The Red Haven Award salutes you for being who you are and charges you with getting the most out of what you have been given.”

The Herald Bulletin will partner with the Anderson Noon Exchange Club in providing Vernetti’s winning scholarship.