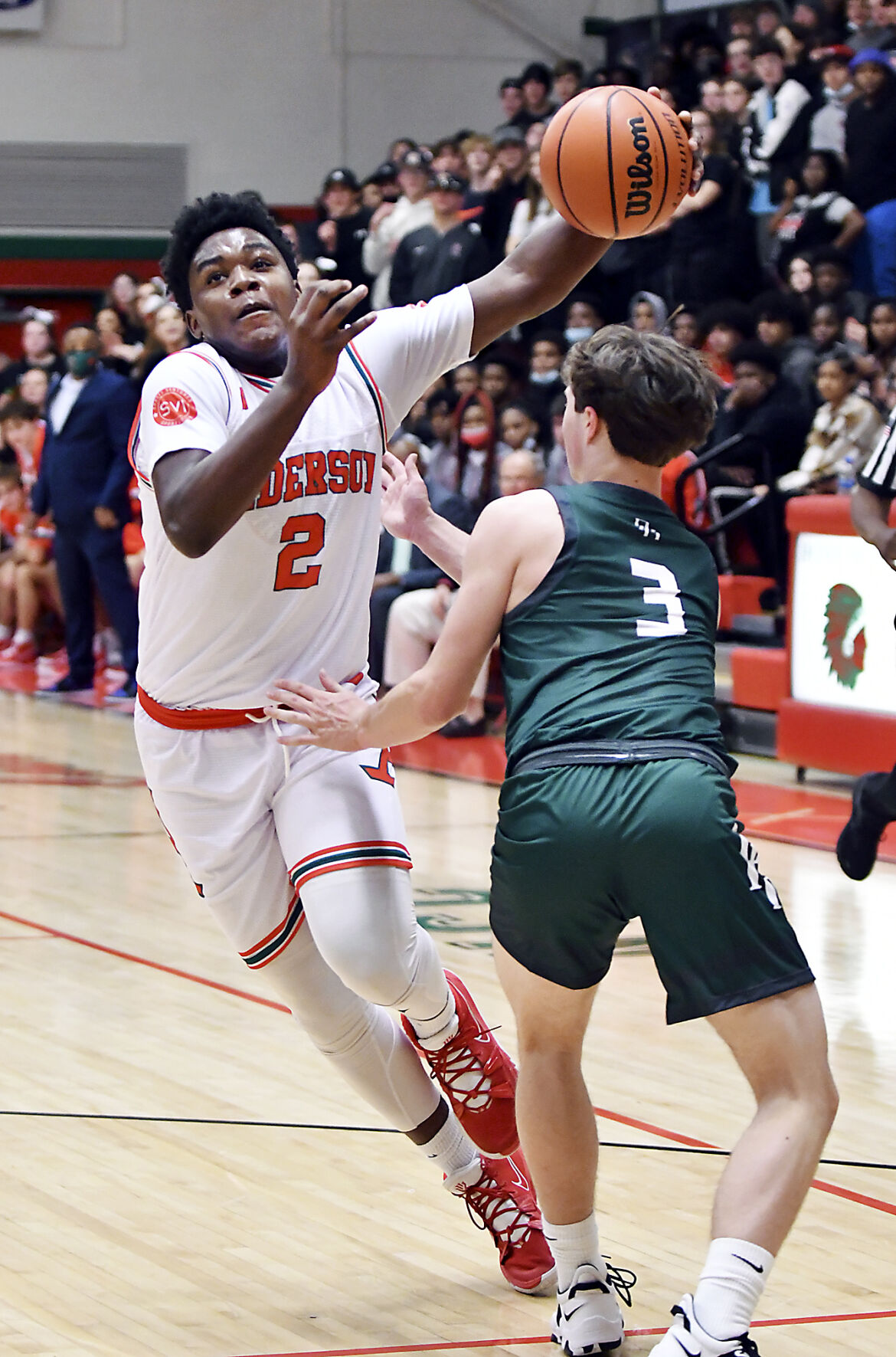 As Anderson’s Ahmere Carson drives toward the basket, he takes the ball over the head of defender Jamison Dunham as he goes up for a shot. 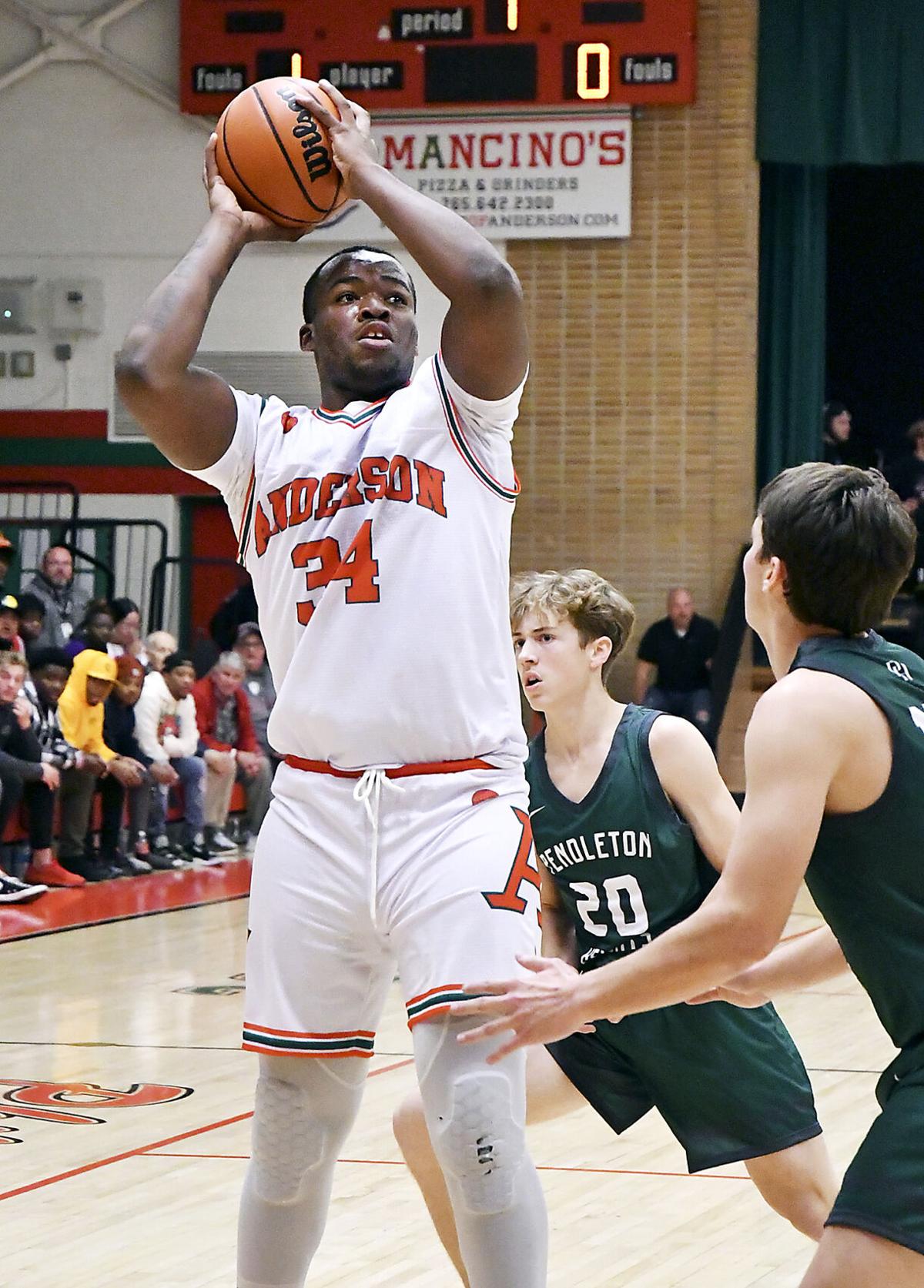 Anderson's Sean Paige goes up for a shot. 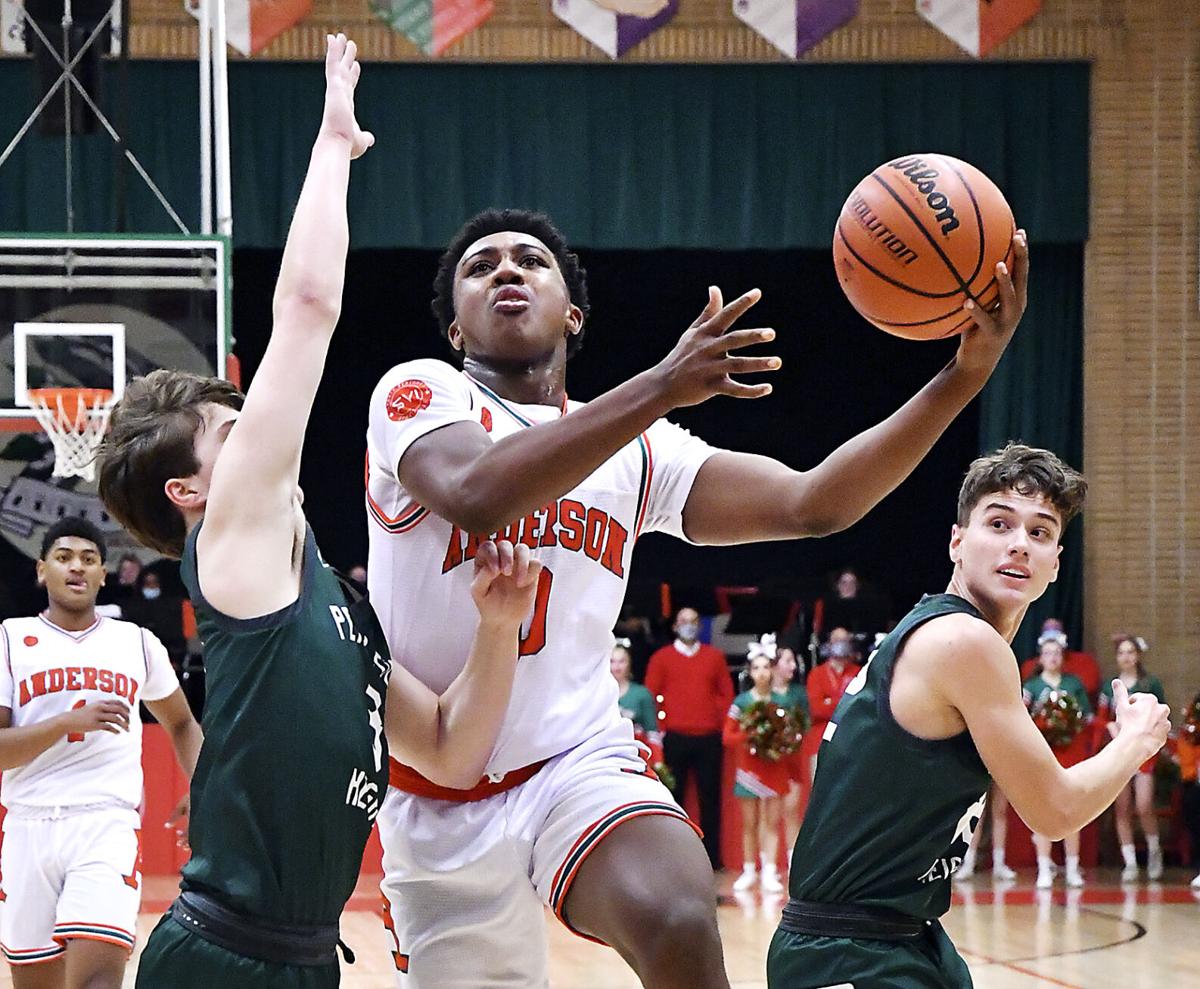 Anderson’s Tyrell Wills goes up for a shot after driving the lane against Pendleton’s Jamison Dunham and Gabe Simons. 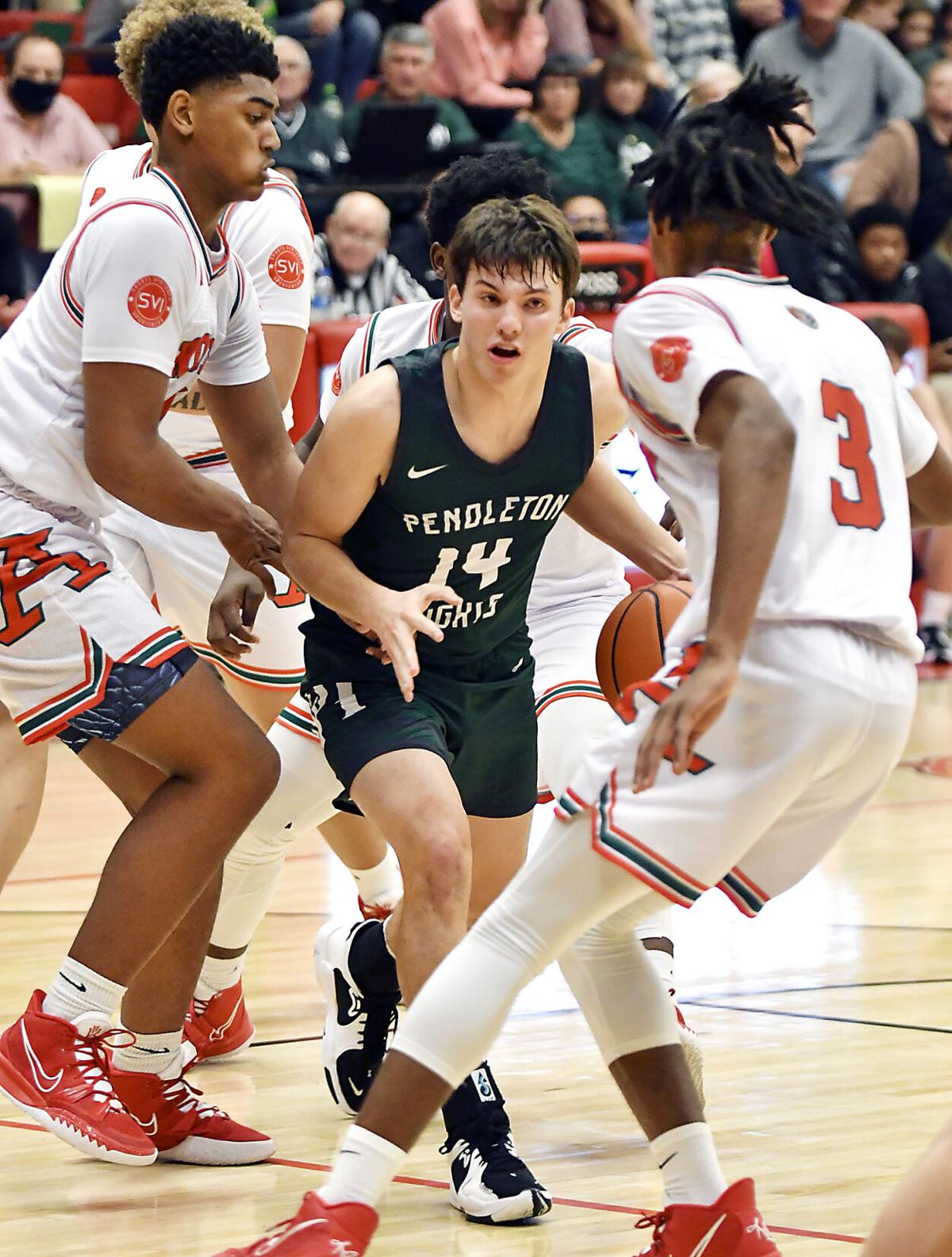 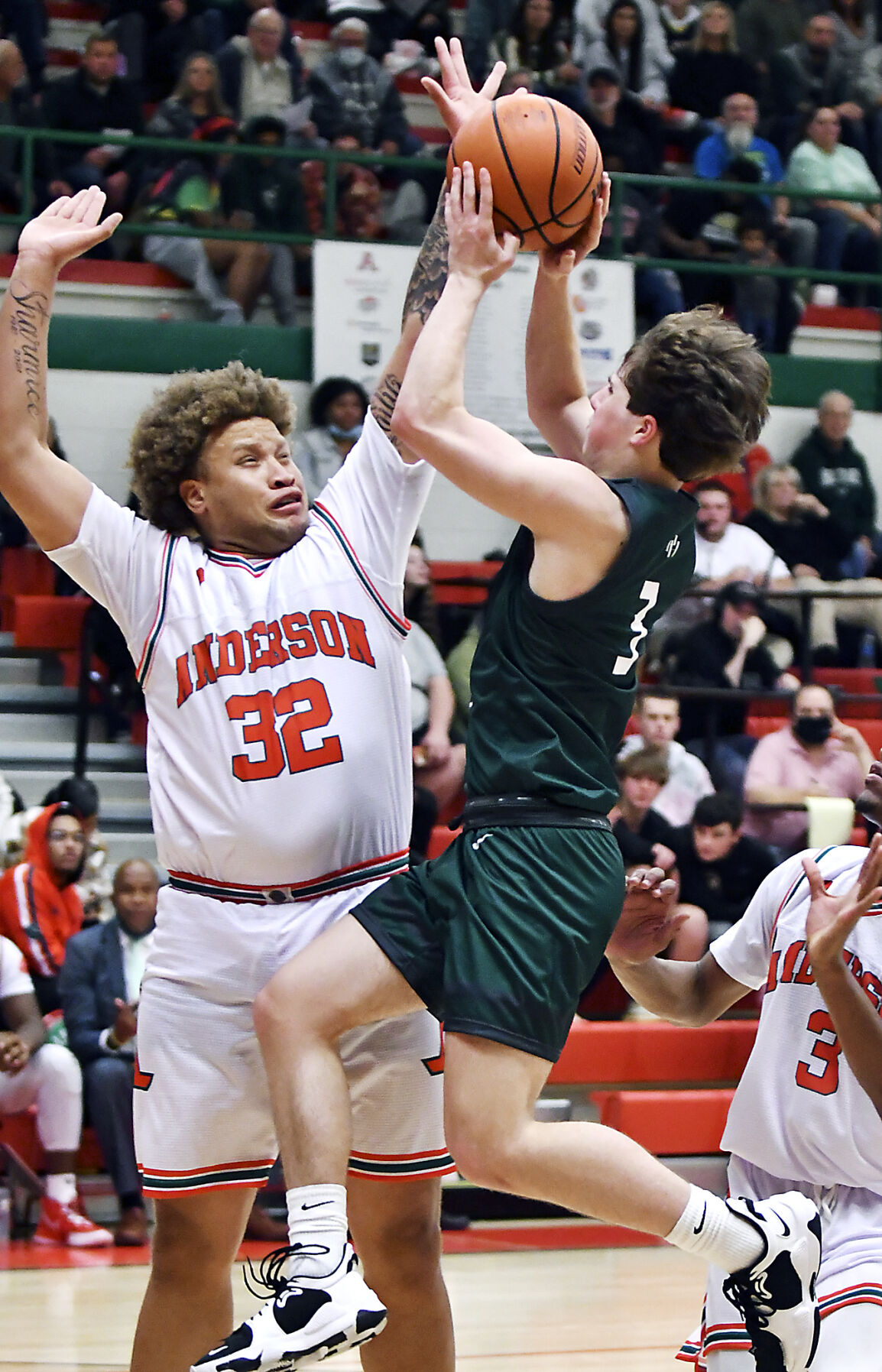 Pendleton's Jamison Dunham goes up for a shot after driving the lane as Latrell White defends.

As Anderson’s Ahmere Carson drives toward the basket, he takes the ball over the head of defender Jamison Dunham as he goes up for a shot.

Anderson's Sean Paige goes up for a shot.

Anderson’s Tyrell Wills goes up for a shot after driving the lane against Pendleton’s Jamison Dunham and Gabe Simons.

Pendleton's Jamison Dunham goes up for a shot after driving the lane as Latrell White defends.

ANDERSON — A fast start gave the Anderson Indians a sizable cushion by halftime, and their lead over Pendleton Heights swelled to nearly 30 points in the third quarter. It was a cushion they needed down the stretch.

Junior Ahmere Carson poured in 24 points and senior Sean Paige made his Indians debut with 13 points as the Tribe held off a determined Arabians squad 68-50 on Phil Buck Court on Tuesday evening in the season opener for both teams.

“I was nervous a little bit, but I had to get over that,” Carson said. “Once I hit the first two, I knew I was in the groove then. I might as well keep hooping. There’s not point in stopping now.”

Carson and the Indians did not stop, nor did they slow down.

A Ja’Quan Ingram three-point play closed out the first quarter with Anderson on top 17-8, and Jaylen Murphy scored off one of Carson’s three assists to push the lead to 31-13, the biggest of the first half.

“The biggest thing for us is, we don’t care if they get up 8-0 or we get up, we have to stay poised,” Anderson coach Donnie Bowling said. “We really wanted to work the ball inside. We felt we had an advantage there.”

Murphy and Paige are both 6-foot-8 and helped Anderson to a sizable rebounding edge of 18-11 at the break. Ingram finished leading all players with 12 boards.

The lead kept growing in the third quarter, and a Ty Wills basket gave Anderson its biggest lead at 53-27.

But Jamison Dunham scored the last four points of the quarter — including a 3-point shot from 27 feet — and the Arabians began fouling to put Anderson at the free-throw line throughout the fourth quarter in an effort to close the gap further.

The Indians were just 7-of-19 from the free-throw line in the final period, but the Arabians did not take advantage enough. Another Dunham 3-ball cut the deficit to 16 points at 61-45, but the Arabians could get no closer.

“We kept getting that opportunity, and they kept leaving the door open, but we couldn’t capitalize on it,” PH coach Adam Ballard said. “When you get a team that misses 14 free throws (for the game), you’ve got to make them pay for that.”

Luke Candiano led the Arabians with 17 points while Dunham added 14, and Josiah Gustin had 12 points and seven rebounds.

Kedric Anderson added 11 points for the Indians as well as nine rebounds. Wills finished with nine points and was largely responsible for guarding Dunham throughout the night.

The Indians will travel to Lapel on Friday evening in the home opener for the Bulldogs while the Arabians return to action Tuesday at Westfield.

Join Rob Hunt, George Bremer and WHBU's Zack Johnson for the return of "Not 4 Print." This week's podcast previews the boys basketball season and is available at heraldbulletin.com.