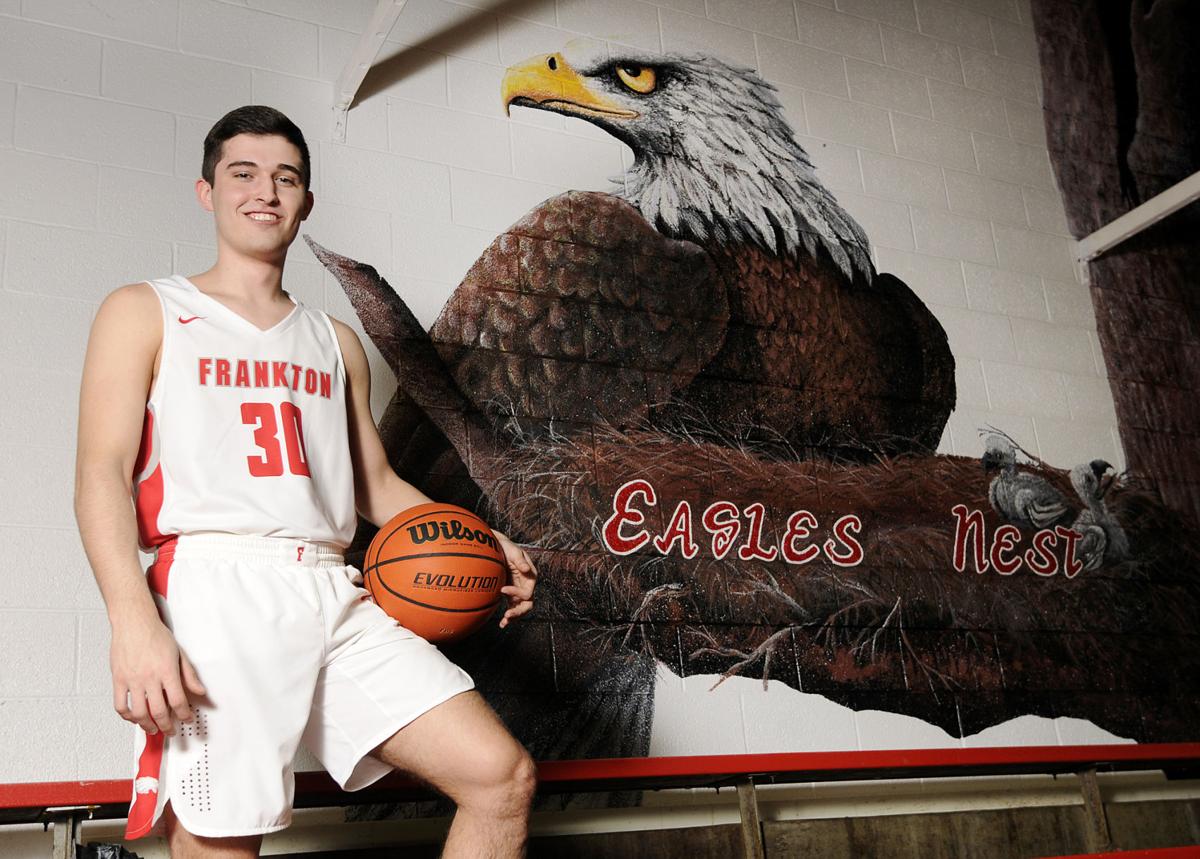 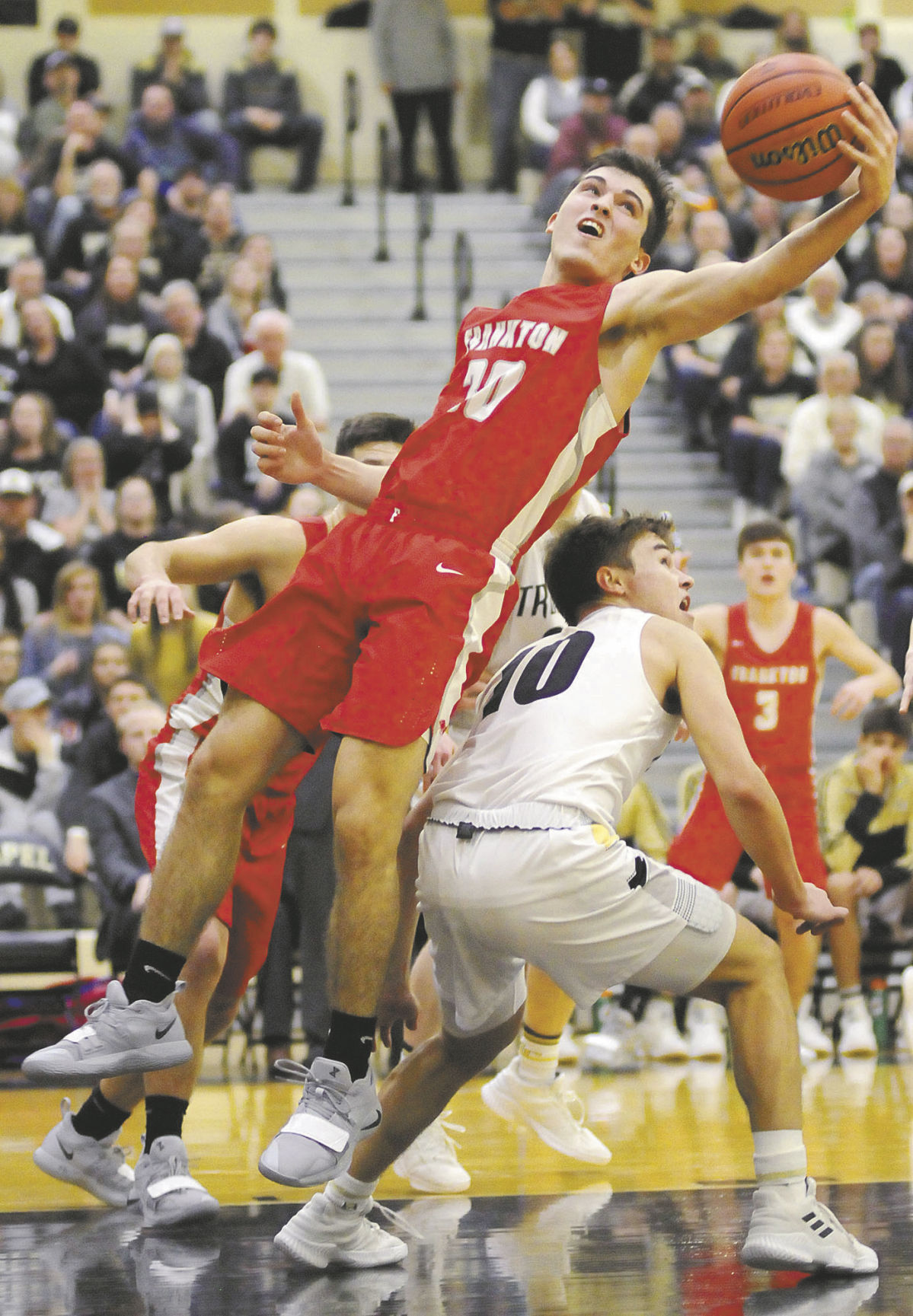 Frankton’s Kayden Key grabs an offensive rebound in the regional final at Lapel on March 9, 2019. Key scored 41 points in the game while struggling with anxiety issues.

Frankton’s Kayden Key grabs an offensive rebound in the regional final at Lapel on March 9, 2019. Key scored 41 points in the game while struggling with anxiety issues.

ANDERSON — On the field of play, athletes come face to face with opponents who are easily identified by a different color of jersey.

For 2019 Frankton graduate Kayden Key, he had beaten them all. He left the Eagles with over 1,000 career points, a Madison County championship, two sectional and regional titles and, of course, the 2017 Class 2A state championship.

Those accomplishments led him to Olivet Nazarene University in Bourbonnais, Illinois, and a chance to play basketball for a successful college program.

He was on top of the world. Everything seemed perfect.

But, inwardly, Key was struggling with an invisible opponent, one that wore no jersey and was always attacking from within, never on defense.

Key headed to ONU with high hopes after such a prolific high-school career. The Tigers boast a winning program, having won 82 games over the last four years, including a 30-3 record in 2019-20.

But Key, who had struggled with anxiety most of his life, never took the court.

It became apparent to him something was not right as the anxiety took hold and began to make campus life, nearly three hours away from his family and support system, nearly impossible.

Like many who struggle with mental disorders, Key became adept at masking it to casual observers. To watch him interact with his teammates or play the game, those outside his close circle had no idea what he was going through. His feelings of anxiety grew worse as he neared the end of high school and small-town life.

“I’m the type of person who wants to know what’s going on,” Key said. “So, just the unknown, that really got to me, too. The anxiety has always been there.”

The 2019 THB Sports Boys Basketball Athlete of the Year award was a close contest between Key and Lapel’s Luke Richardson for the second straight year. Richardson edged Key in 2018, but Key clinched it with a performance for the ages at regional the following year in wins over Wabash and Covington.

After scoring 15 points in the 57-54 win over Wabash in the morning game, Key electrified the Frankton fans at Lapel High School with a 41-point performance in the championship game win that evening over Covington. In that game, Key was 15-of-23 on field goal attempts — including 4-of-6 on 3-point baskets — made seven of 10 free throws and added four rebounds and three assists as the Eagles advanced to semistate for the second time in his career.

Little did the fans know that night Key was racked with anxiety and barely able to stand.

“I remember the regional game. I couldn’t sleep the night before because I was so anxious,” he said. “I didn’t even sleep before the night game, either. I remember being in the locker room, and I was shaking so bad because I had so much caffeine in me to try to stay up. I was drinking coffee all morning.”

According to an October report by the World Health Organization, one in four individuals worldwide suffer from some sort of mental health disorder at some point in their life and around 450 million are currently dealing with the issue.

Unlike a sprained ankle or broken thumb, this injury for Key was invisible, one he kept inside throughout high school and rarely let anyone know about. His smile and production on the court frequently masked a growing struggle within.

“Through that time, it was so much adrenaline,” he said. “Playing the game really helped me to avoid it.”

His arrival at Olivet did nothing to lessen his struggles. If anything, being so far away from that support system made things even worse.

“When I got there, I was on my own, and I didn’t have any relationships yet,” Key said. “I think I struggled with that. It was something that built up my senior year (at Frankton) and through some other stuff. I was losing weight and I was just not healthy at all.”

Key said this struggle was especially frustrating because being focused and in control mentally are such big parts of playing basketball and something he has always strived for.

“I always struggled with that, with postseason stuff, because trying to be mentally strong is something I’ve always trained at,” he said. “Getting stronger mentally off the court, I can see where that is helping my game too.”

That first semester in Illinois the anxiety began to lead to feelings of depression, and he was losing weight. Key left school and came home to finish his therapy, determined to get better mentally, spiritually and physically.

Being young, male and athletic, there was an understandable trepidation about going public. There can be an ugly and unfair stigma that goes with any sort of mental health struggle, especially for someone in his specific demographic.

But, in late January, he posted on social media what he was struggling with and that he was reopening his recruitment.

“It was hard because I was struggling with it all winter, and I was trying to hide it because I didn’t want people to know why I wasn’t playing,” Key said. “I really care what people think of me, but it doesn’t matter because that’s a part of me. I felt like I needed to let people know. There’s no shame in it. It’s what happens.”

He said many reached out to him following the announcement, including other athletes who had fought the same fight. It made Key realize he was not alone.

“I tried to hide it as much as possible,” he said. “But you don’t need to. I had really talked to my sisters and my parents the most about it, and that was big, but it’s nice to talk to other people about it. I feel like that’s something I didn’t do real well with. I tried to bundle it up inside. You don’t have to do that.

“Now I feel like I’m in the best shape of my life, mentally, physically and spiritually,” he added. “I just felt like I wanted to start fresh, so I reopened my recruitment.”

Enter Anderson University and head coach Owen Handy, who said this is a more common problem among college athletes than most realize. Good mental health is an aspect of overall wellness he stresses for his athletes.

“As a basketball team and a basketball program, we want our players to know that mental health is a real thing,” Handy said. “There shouldn’t be shame in seeking help with mental health topics. I think a lot of times, especially in the athletics world, guys are less willing to speak up and say ‘Hey, I’m struggling with something, and I need help.’ It says a lot about (Key’s) character and courage to be able to speak up and seek some help with some things.”

“It was really nice to be able to talk to him and be vulnerable about what was going on,” Key said of Handy. “I’m really relational, so having that relationship and being able to talk about it was huge for me.”

And Key has a message for younger kids who may be dealing with the same struggle.

“A part of me wanted to share my story to help someone else who might be struggling with it because there is such a stigma,” he added. “People think you can’t talk about it, but no, you absolutely can.”

“I love the example he sets by being willing to speak about it and maybe normalize for people that this is a common thing, and it’s OK to not be OK all the time,” Handy said. “It’s OK to be vulnerable about that. What I hope is that, since he’s so comfortable talking about it, that others will be inspired or gain courage from his courage.”

EXCITEMENT FOR THE FUTURE

Handy feels the 6-foot-1 Key will fit right in for the Ravens as a combo guard, one who can play on or off the ball.

“So often, guys who are really good scorers, part of the reason they are good scorers is that they don’t take bad shots,” Handy said. “And Kayden doesn’t take a lot of bad shots. If you look at him, you would think ‘How does this guy score around the basket the way he does?’ He just has a knack for putting the ball in the basket.”

For Key, there is additional reason to be excited. This fall, he will reunite with his 2017 Frankton state championship teammate Maurice Knight, who will be a senior after a banner junior campaign when he scored 19 points per game for the Ravens.

And Knight will not be the only familiar face on the Ravens’ roster. Former county and sectional rivals like Austin Lyons (Lapel), Ronny Williams (Liberty Christian) and Drew Luce (Wapahani) will compete alongside Key, which he prefers to having to guard them.

“That’s really a big thing too, just all of us together on one team and being local,” Key said. “That’s being able to team up with them after playing against them for so long. It’s just got me really excited.”

Considering the struggles he has dealt with, being close to home and near his family will be important.

“It’s going to be awesome, just knowing that I can develop the relationships on campus while having those off campus. That’s going to be huge for me with my continued growth,” Key said. “Just having my family at all my home games, and the majority of the away games, that’s big.”