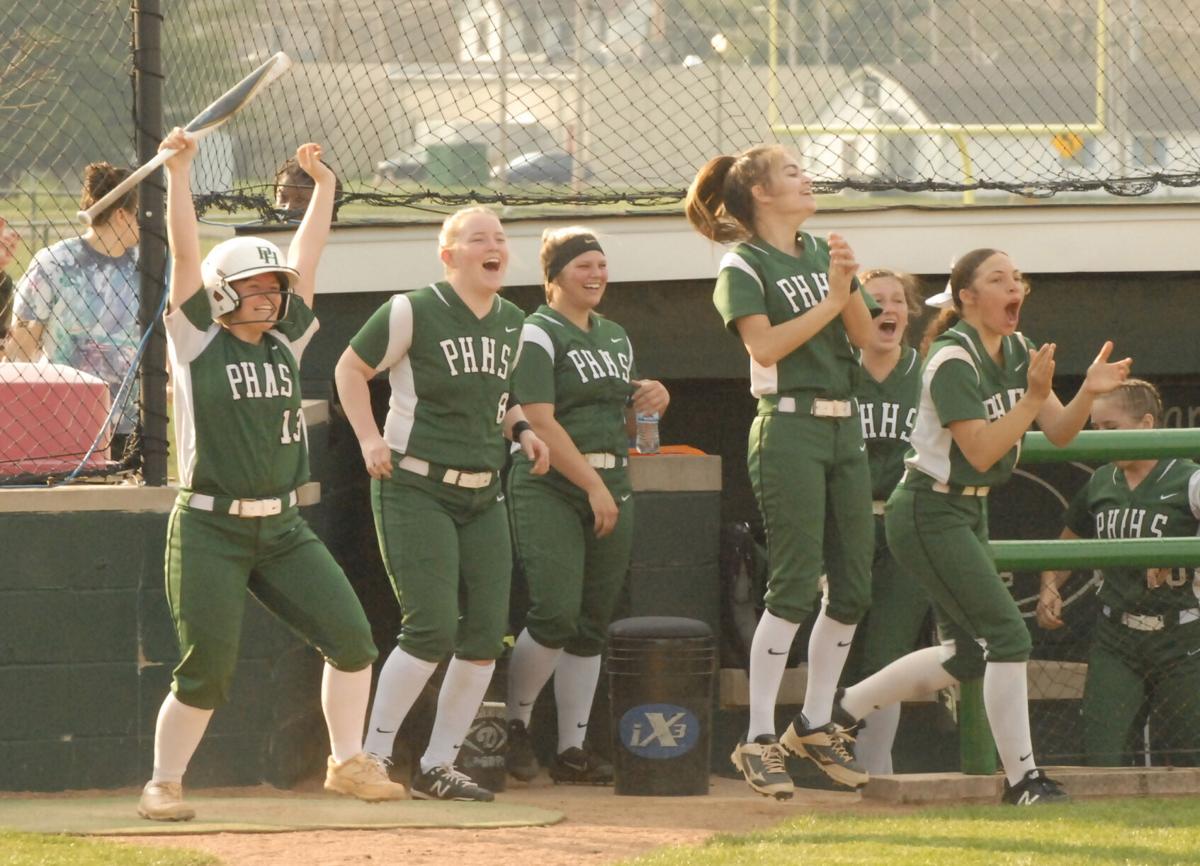 Pendleton Heights players celebrate after Kylie Davis hit a lead-off home run in the bottom of the first inning Tuesday against Shenandoah. 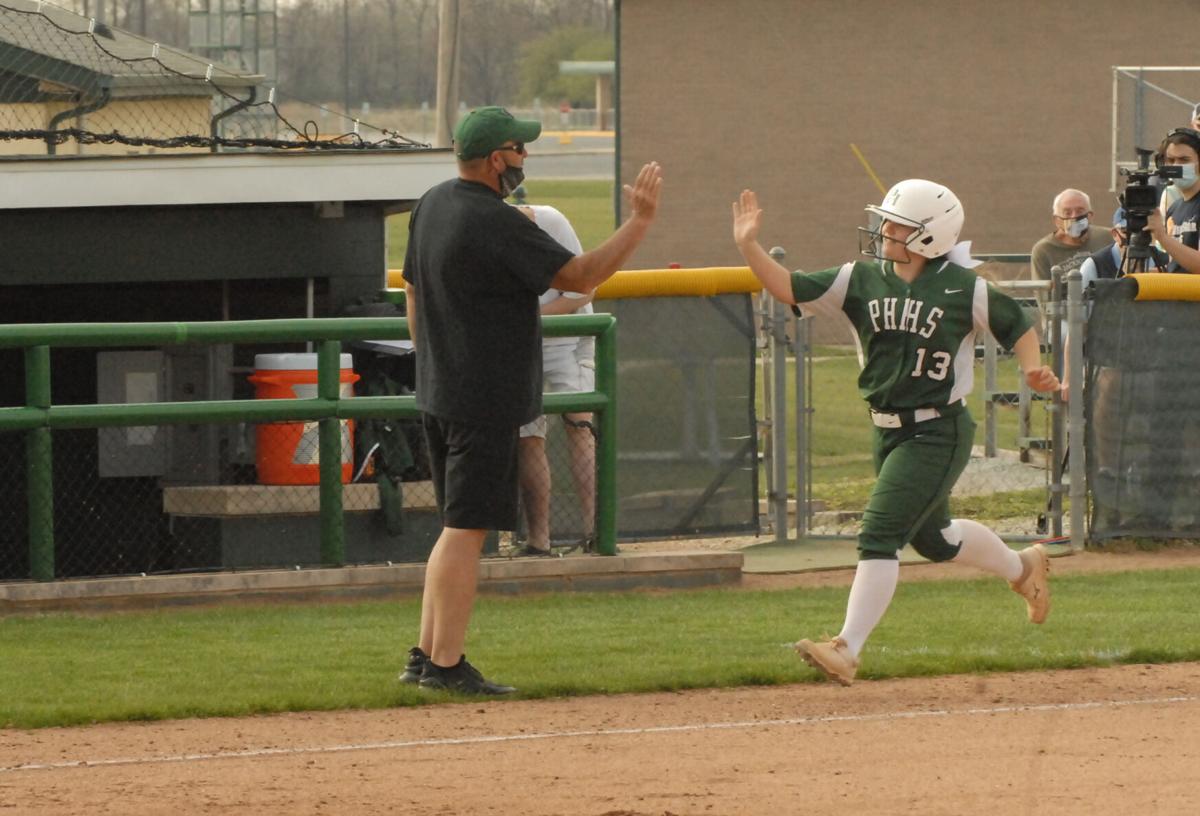 Pendleton Heights' Kieli Ryan gets a high-five from coach Rob Davis after hitting a solo home run against Shenandoah. 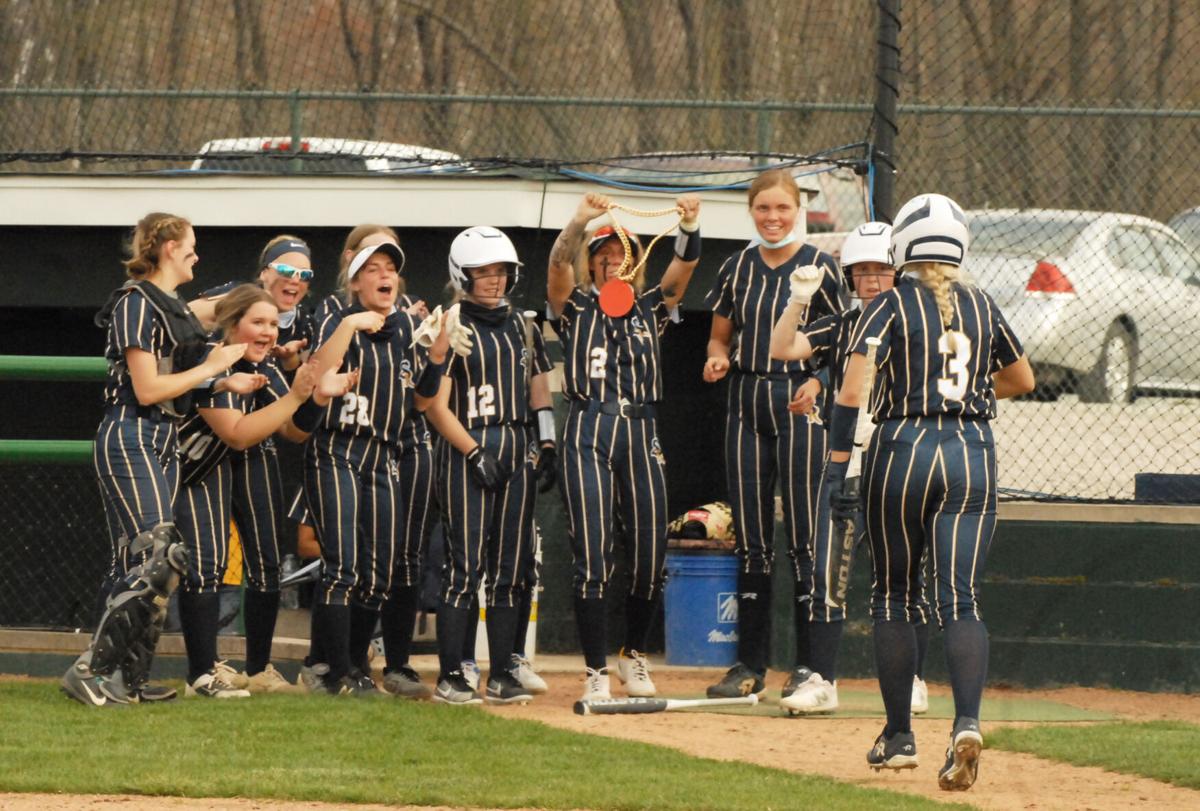 Shenandoah's Kenedi Helms is greeted by her teammates after belting a two-run homer over the left field fence Tuesday. 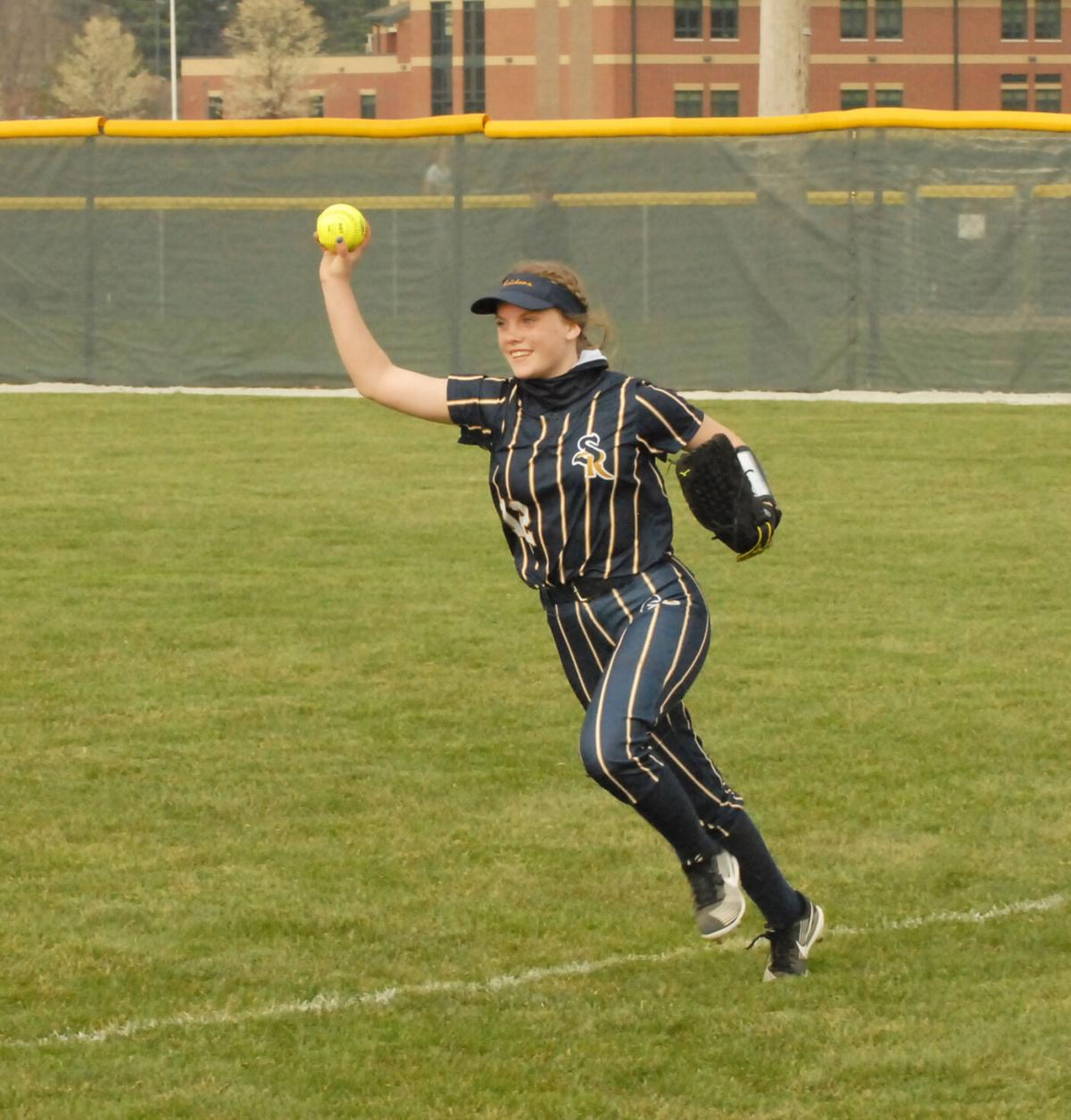 Shenandoah's Starlight Forshey holds the ball in the air after making a running catch in right field Tuesday against Pendleton Heights. 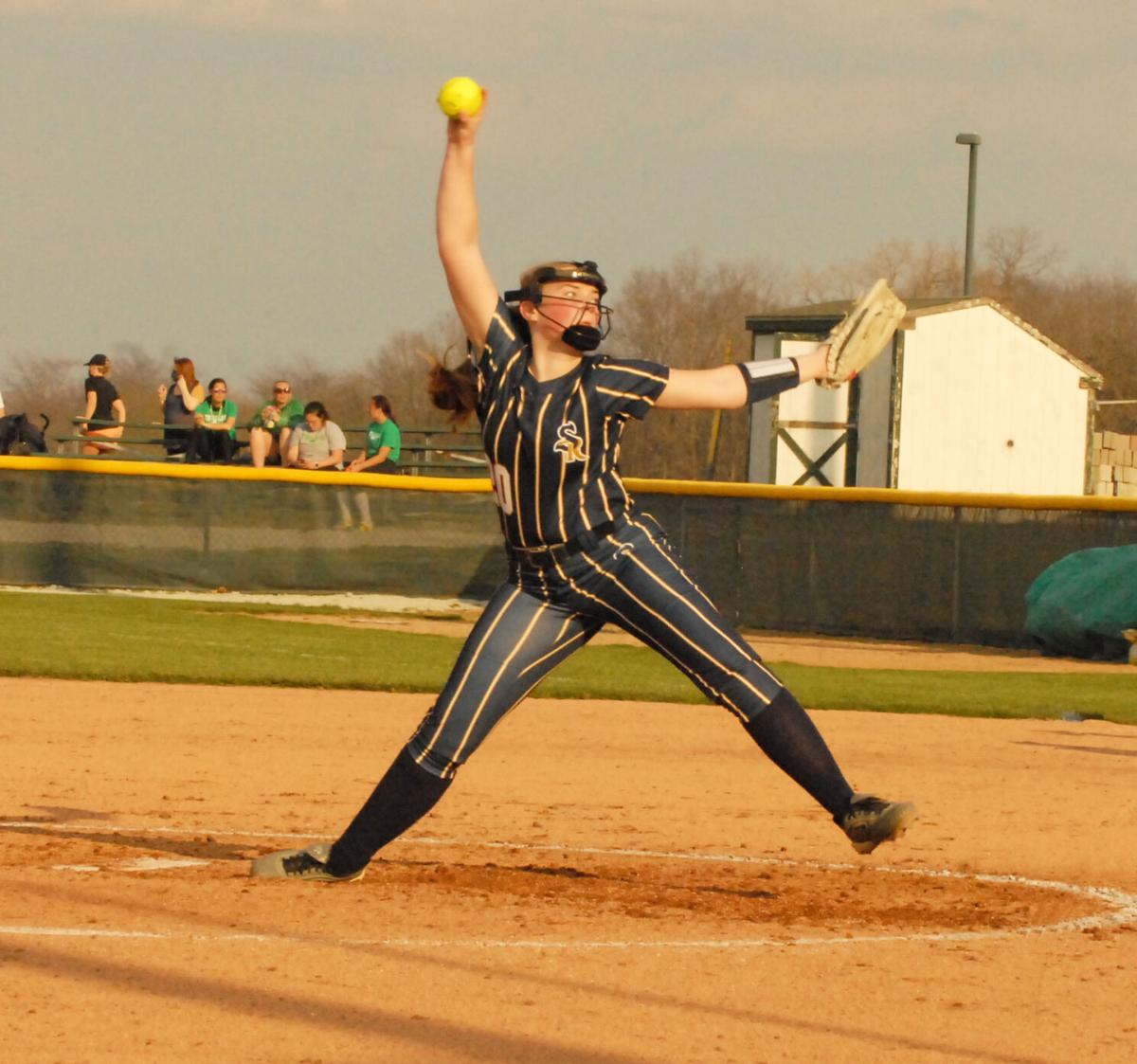 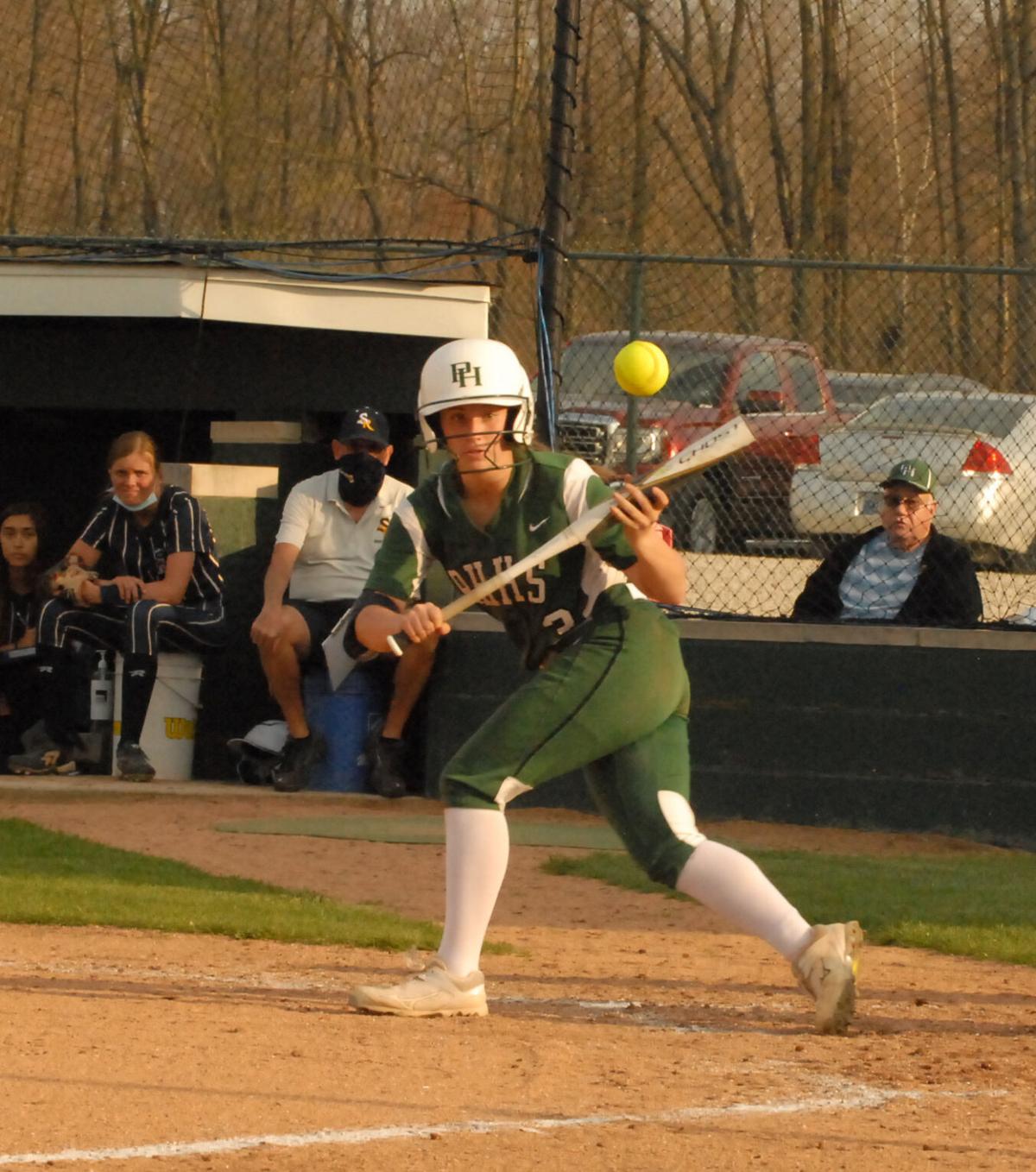 Pendleton Heights players celebrate after Kylie Davis hit a lead-off home run in the bottom of the first inning Tuesday against Shenandoah.

Pendleton Heights' Kieli Ryan gets a high-five from coach Rob Davis after hitting a solo home run against Shenandoah.

Shenandoah's Kenedi Helms is greeted by her teammates after belting a two-run homer over the left field fence Tuesday.

Shenandoah's Starlight Forshey holds the ball in the air after making a running catch in right field Tuesday against Pendleton Heights.

PENDLETON — Kylie Davis has scored plenty of runs as the catalyst and leadoff hitter during her four-year softball career at Pendleton Heights. But of all those times crossing the plate, she had never driven herself in.

She wasted little time Tuesday evening marking that off her to-do list.

Davis hit the first of five Arabians long balls — the first of her high school career — and started the game’s biggest rally with her more commonly used small-ball approach as Pendleton Heights knocked off Shenandoah 13-2 in five innings at Legends Field.

Davis, who said it was the first round-tripper she had hit in any game since the fifth grade, was all smiles as she rounded the bases.

“I had a feeling all day that I was going to hit one, and I was kind of nervous because I hit two yesterday at practice,” she said. “I just had this feeling going.”

“It was off the scoreboard, bang,” he said. “We knew it was coming. It was just a matter of time before she got one up in the air and out of here. … It’s always good to see your kid do something great, do something for the first time.”

“It’s nice to see him smile sometimes,” she said.

The Arabians were just getting started in the first inning.

Brynn Libler followed with a bloop double to left, and Kieli Ryan blasted a 3-1 pitch over the fence in left for an early 3-0 lead. After Grace Scott singled with one out and advanced on a wild pitch, Ryann Norris delivered her home with an opposite field base hit, and it was 4-0 after one inning.

But Shenandoah (0-2) had an immediate answer.

Elise Boyd led off and was hit on the hand by Pendleton Heights starter Brinkley Epperson and scored when Kenedi Helms hit the next pitch out to left to halve the Arabians lead to 4-2.

Responding to the early big inning by Shenandoah was something to build on for coach Alison Merritt and her young team.

“The biggest thing for me is, as I look at my field, I have five freshmen and sophomores (starting) that have never played high school ball before,” she said. “And for us to come out here and put a score on the board against Pendleton, a ranked team, (that’s good).”

But the Arabians offensive onslaught continued. Following a scoreless second, Bo Shelton became the second PH player to hit her first career home run, a solo shot to right that extended the lead to 5-2 in the third.

PH exploded for eight runs in the fourth inning, the rally coming after the leadoff batter was retired and seven of the runs crossing the plate with two outs.

With one out, Davis bunted her way aboard. Libler followed with a sacrifice bunt but reached base on an error that also allowed Davis to come all the way around to score. After Ryan flew out, Gracie Conkling and Scott followed with RBI singles before Shelton cracked her second home run in as many innings.

Lillian Coffel then doubled, and Avery Mollenkopf singled her home. Pinch-hitter Khloee Gregory capped the inning with a two-run bomb to center, her first as an Arabian, and the lead was 13-2.

The 13 runs were plenty of support for Epperson, who blanked the Raiders outside of the Helms homer. She pitched four innings and struck out eight batters while allowing four hits, two walks and hit a batter.

Shenandoah will travel to New Castle on Wednesday before opening Mid-Eastern Conference play Thursday at home against Wes-Del.

Pendleton Heights (2-1) will open its Hoosier Heritage Conference campaign Wednesday at Delta before hosting some of the best teams in the state at Saturday’s Horseshoe Classic.