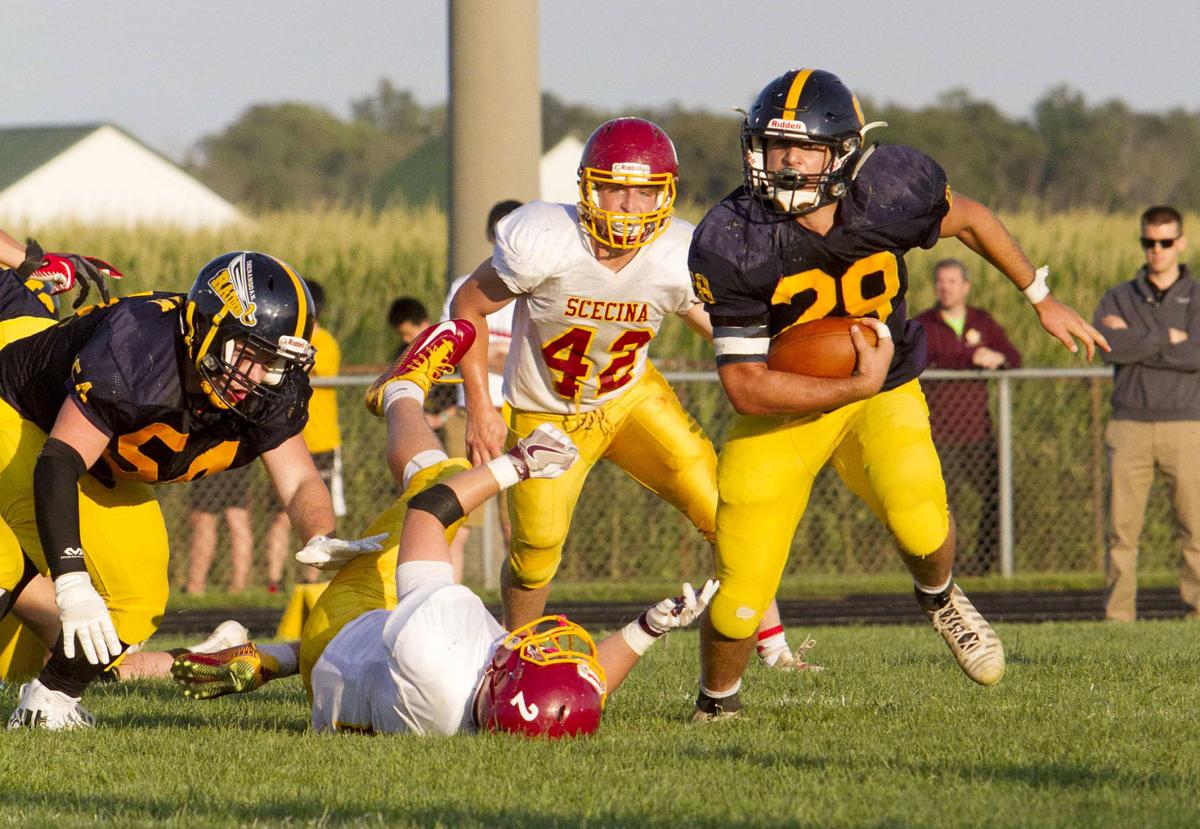 Shenandoah’s Josh Farmer runs the ball during last year’s season opener against Scecina. The Raiders’ first two football games this season — against Scecina and Heritage Christian — are in limbo as Marion County weighs the viability of playing fall sports. 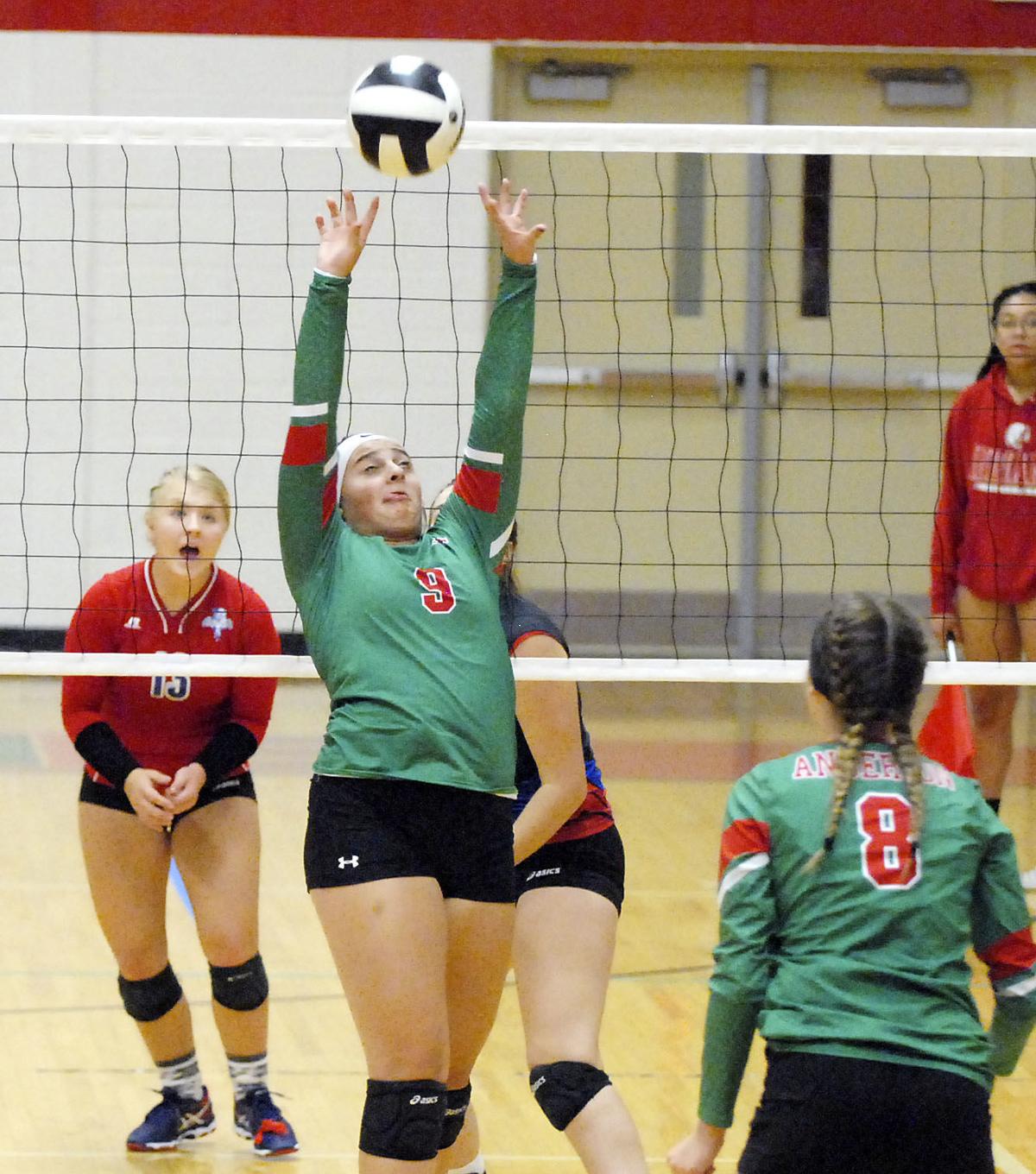 Anderson's Lauryn Williams sets the ball for teammate Hannah Haywood during a match last August against Elwood. The Lady Tribe volleyball team is among several area schools facing a schedule crunch as the status of Marion County fall sports hangs in the balance.

Shenandoah’s Josh Farmer runs the ball during last year’s season opener against Scecina. The Raiders’ first two football games this season — against Scecina and Heritage Christian — are in limbo as Marion County weighs the viability of playing fall sports.

Anderson's Lauryn Williams sets the ball for teammate Hannah Haywood during a match last August against Elwood. The Lady Tribe volleyball team is among several area schools facing a schedule crunch as the status of Marion County fall sports hangs in the balance.

ANDERSON — The status of Marion County high school athletics teetered Wednesday before being temporarily pulled back from the brink, and the aftermath of the waffling left several area schools in limbo, unsure of what the future might hold.

Early Wednesday afternoon, it was announced the Marion County Public Health Department had decided it was unsafe for the contact sports of football, volleyball and boys and girls soccer to be played by county schools until Oct. 1 at the earliest.

Before the sun had set, pushback from county school officials resulted in a walking back of that decision as the MCPHD clarified, saying the data would be monitored closely over the next two to three weeks.

The flip-flop occurred so quickly, at least two area athletic directors were unaware of what had transpired until the decision had been changed.

For Shenandoah, that left the first two football games on the schedule in serious doubt. With a trip to Scecina and a home game against Heritage Christian set for Aug. 21 and 28, respectively, athletic director Todd Salkoski was left in a bind.

With the possibility of his first two football opponents unavailable to play, Salkoski felt he needed to act quickly. Utilizing an email service through the IHSAA, he put out feelers for possible replacement opponents and heard back quickly from several of the state’s best teams.

“Yesterday, I put out an email to, I think it was, 125 ADs,” Salkoski said. “It included a lot of the Indy area schools and went out to, I think it was, a 75-mile radius. I had three quick responses from New Palestine, Fishers and Marion. That doesn’t sound like a (Class) 2A schedule.”

Fishers and New Palestine are scheduled to play Marion County schools in their first two games while Marion is slated to play Lawrence North on Aug. 28.

The headaches are not limited to Shenandoah or to football.

While both Anderson Prep and Lapel have two Marion County football opponents each as well, Anderson, APA and Liberty Christian will be dealing with issues related to their Indianapolis-area conference opponents in volleyball and soccer. Also, the Pendleton Heights girls soccer team has three opponents — Pike, Lawrence North and North Central — on its schedule before mid-September.

“I think soccer is going to be a pretty easy fix for us,” Chappell said. “We play Shortridge in soccer one time, and if they close down Marion County, we would lose two other soccer games (Indiana Math & Science and Irvington Prep). I think that we can find replacements for those, and if not, I think we will still have plenty of games.”

For Anderson, the trouble spot during this stretch is Arsenal Tech, a North Central Conference foe. Currently, the Indians volleyball team would play Tech on Sept. 19 while the boys and girls soccer teams are scheduled to meet the Titans on Sept. 12, just a week prior to the NCC tournament getting underway.

“We actually have a conference Zoom meeting next week, and I’m sure that will be a topic of discussion,” Anderson AD Steve Schindler said. “The approach most of us in the state have taken is just going week by week. Most of us haven’t even started looking at how we’re going to treat fans coming in. We can’t get to that point if we don’t take care of things right now.”

A question for further down the road might be about what the postseasons for these sports might look like. If the coronavirus numbers do not stabilize to the point where it is deemed safe for sports to resume in Marion County, it is not inconceivable the IHSAA could start sectionals without any Indianapolis area schools involved.

“I think the IHSAA is going to want to play anything we can play. That’s the feeling I’m getting from them,” Chad Smith of PH said Wednesday.