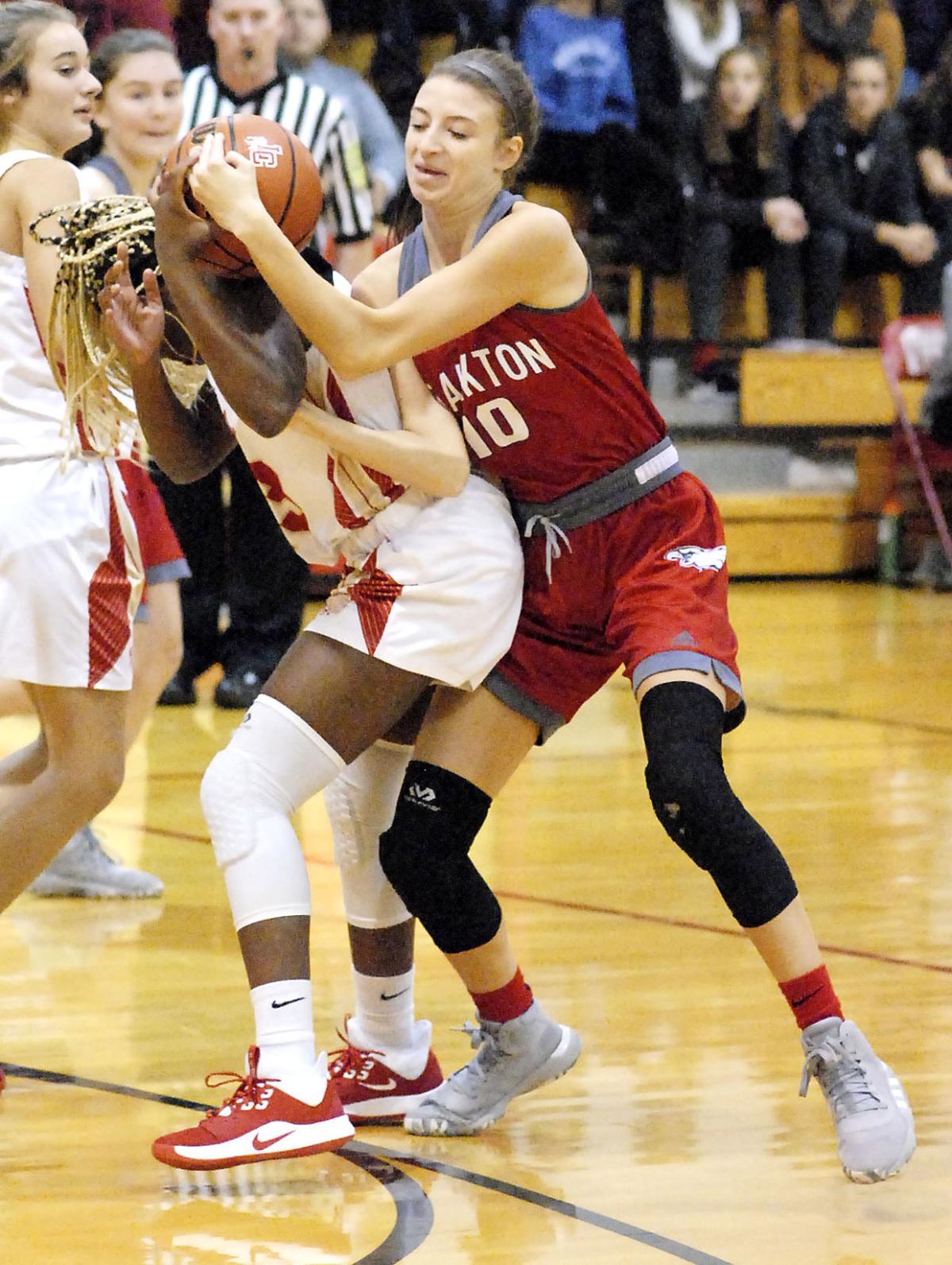 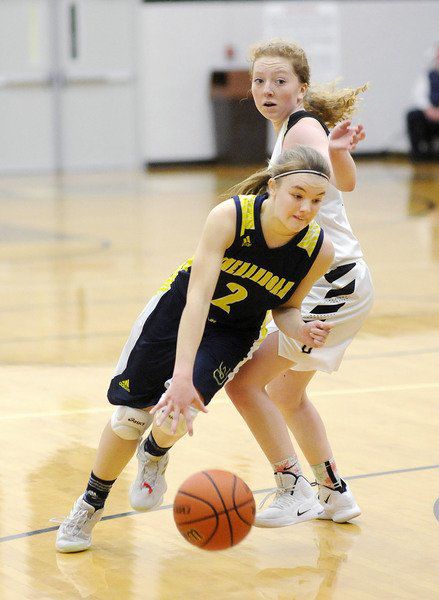 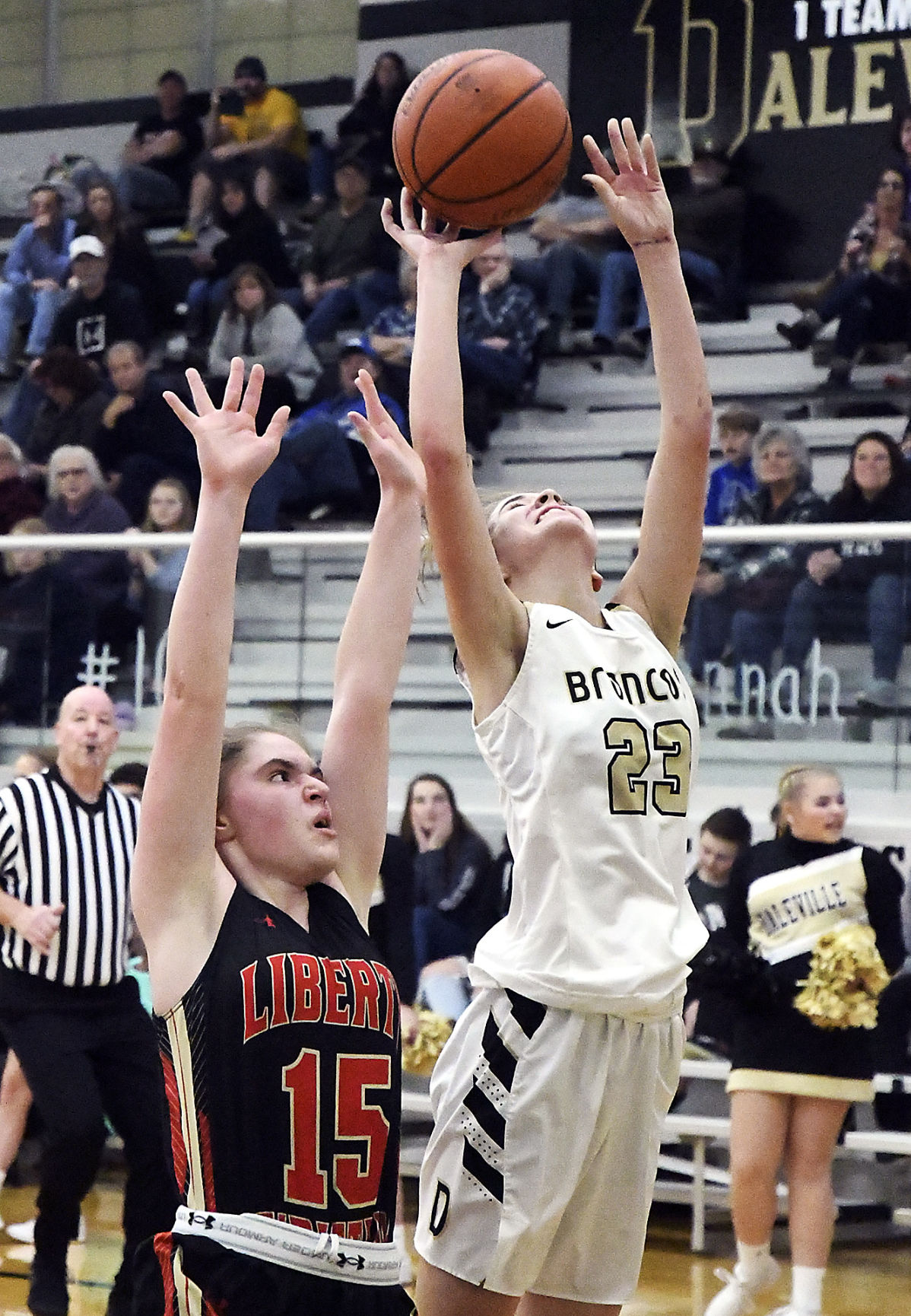 Daleville leading scorer Heather Pautler gets fouled by Mady Rees of Liberty Christian as she goes up for a shot in action from late in the regular season.

Daleville leading scorer Heather Pautler gets fouled by Mady Rees of Liberty Christian as she goes up for a shot in action from late in the regular season.

Three groups of area ladies had to show up for another week of basketball practice this week. And they were undoubtedly glad to do it as Class 1A Daleville and 2A Frankton and Shenandoah each won their sectional championships last Saturday night. Here is a glance at the matchups from their regional sites for Saturday morning:

This will be a rematch of Central Indiana Conference rivals as the surprising Panthers look to avenge their 56-24 home loss to the Eagles in December.

Sophomore guard Johwen McKim (11.9 points per game) is the most potent Eastbrook player, having hoisted more that 300 field goal attempts this season, including 103 from beyond the arc where she is a 32-percent shooter. No other Panthers player averages over five points per contest.

The Eagles counter with a balanced offensive arsenal featuring six players who have led the team in scoring this year. Six-foot-1 junior Chloee Thomas carries the team’s top scoring average at 9.2, but senior Addie Gardner (9.1), sophomore Lauryn Bates (8.0) and junior Ava Gardner (7.8) are equally capable of carrying the load.

The Panthers average 35 points as a team, while Frankton scores 52 per game and shoots 70 percent on free throws.

Rochester, like Frankton, does not have any players averaging double digits in scoring. What the Zebras do have is tremendous size with five players at 5-10 or taller, and they average over 35 rebounds. Senior Maci Brown is the top scorer at 9.9 per game.

There are no statistics available for the Knights, but they had a similar result as Frankton against one common foe. They each won a close game against Tipton, the Eagles by four and LCC by two.

The fifth-ranked Raiders’ potent 1-2 punch of Kathryn Perry (22 points, 3.8 assists) and Erikka Hill (18.3 points, 12.9 rebounds) look to continue carrying the offensive load against a smaller but athletic South Putnam team. One key matchup is the Eagles’ offense, which averages 57 points against a tough Shenandoah defense that allows just 32 points per game.

South Putnam also does not have a regular rotation player taller than 5-9, which could lead to a big day for the 5-11 Hill and 6-0 Jenna Stewart (7 rebounds per game).

“They like to pick up the pressure. They’re a man-to-man team,” Shenandoah coach Dameon Wyatt said of South Putnam. “They’re kind of a smaller, feisty team as I like to call them.”

Ranked No. 1 in 2A and in the top 10 overall, Triton Central is regarded by many as the favorite to win the state championship. The Tigers are led by seniors Maya Chandler (19 ppg) and Rylie Stephens (16.7 ppg, 7.4 rpg) and junior Tenleigh Phelps (13.7 ppg). The Tigers defeated Covenant Christian 64-51 in late January, one of just five games for TC decided by less than 20 points.

The Warriors boast an outstanding senior duo themselves with Ilani Williams-Harris (16.5 ppg) and Sania Borom (10.9).

North Vermillion has a high-scoring guard combo in junior McKenzie Crowder (15.3) and senior Rylee Dowers (13.7). The Falcons will face a young Blue River Vikings team with just one senior that is led by sophomore center Ally Maddon, who averages a double-double at 15.8 points and 10.8 rebounds per game. BRV edged Daleville by one point back in December.

“Northfield is really quick. Their transition is incredible,” Daleville coach Ashley Fouch said. “They’re going to be super disciplined. For us, we’re going to have to be just as disciplined. If you compare our stats, we’re lined up right with them. Honestly, whoever shoots the ball better is going to win this game.”

The championship games will be played at 8 p.m. Saturday at all three sites.