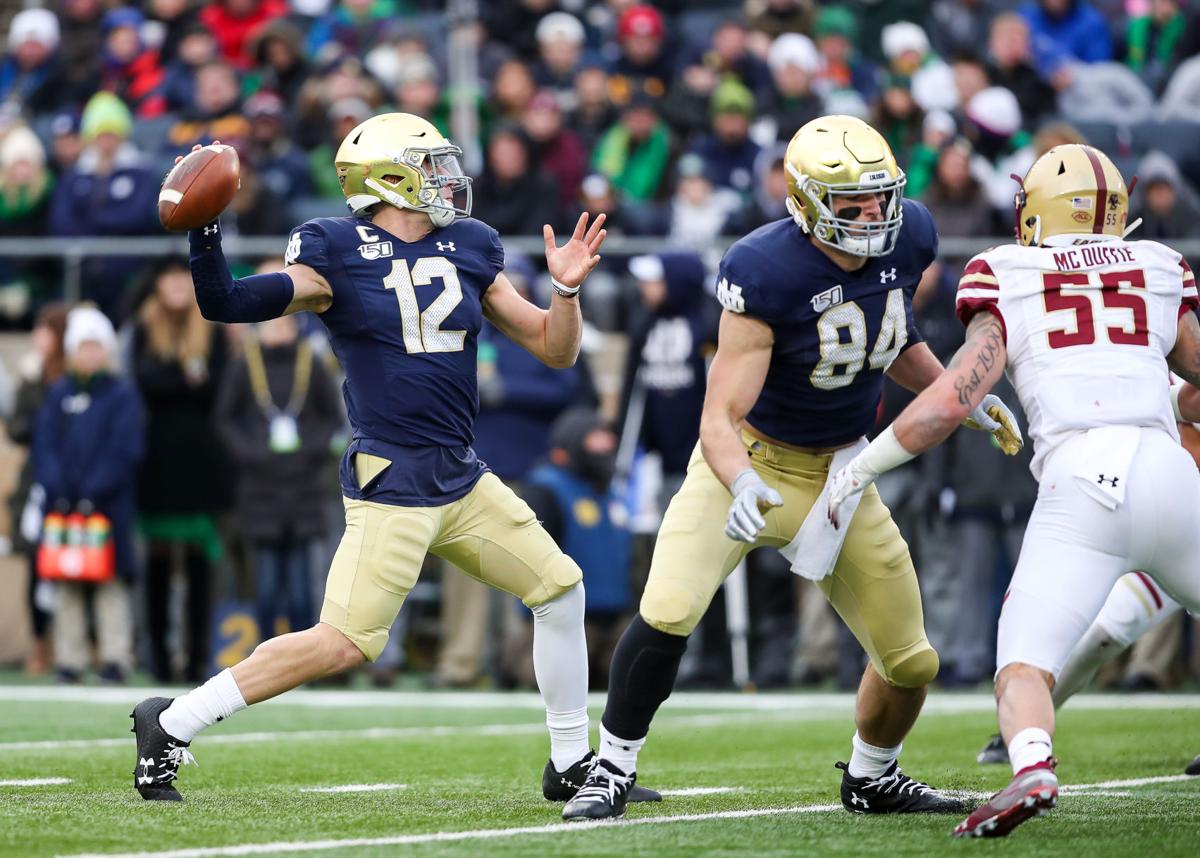 Notre Dame senior Ian Book (12) throws a pass while junior Cole Kmet, 84, tries to block Boston College junior Isaiah McDuffie (55) during Notre Dame’s 40-7 victory over Boston College on Nov. 23 at Notre Dame Stadium in South Bend. Book announced last week he will be returning to Notre Dame for a fifth season, while Kmet said Thursday he will be declaring for the NFL Draft. 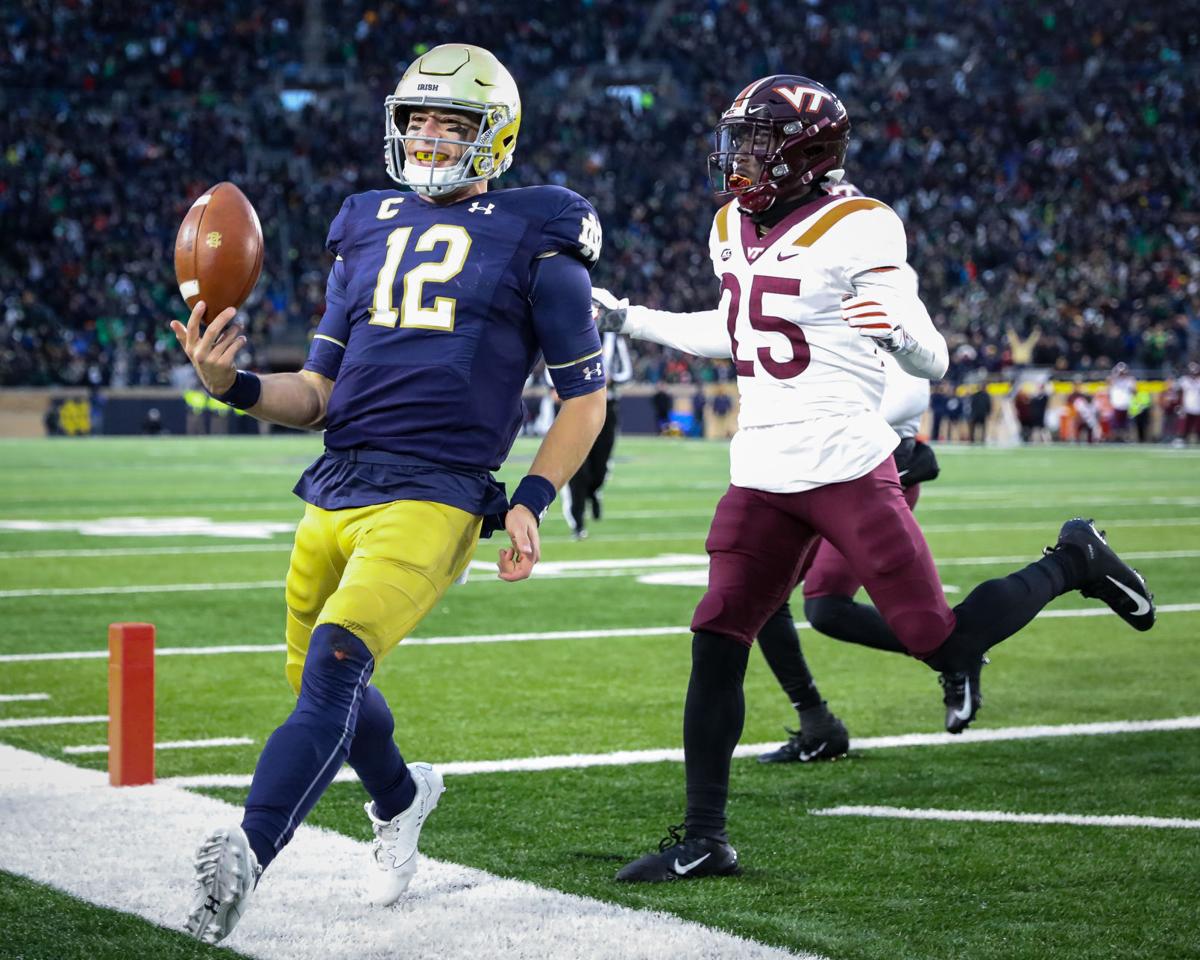 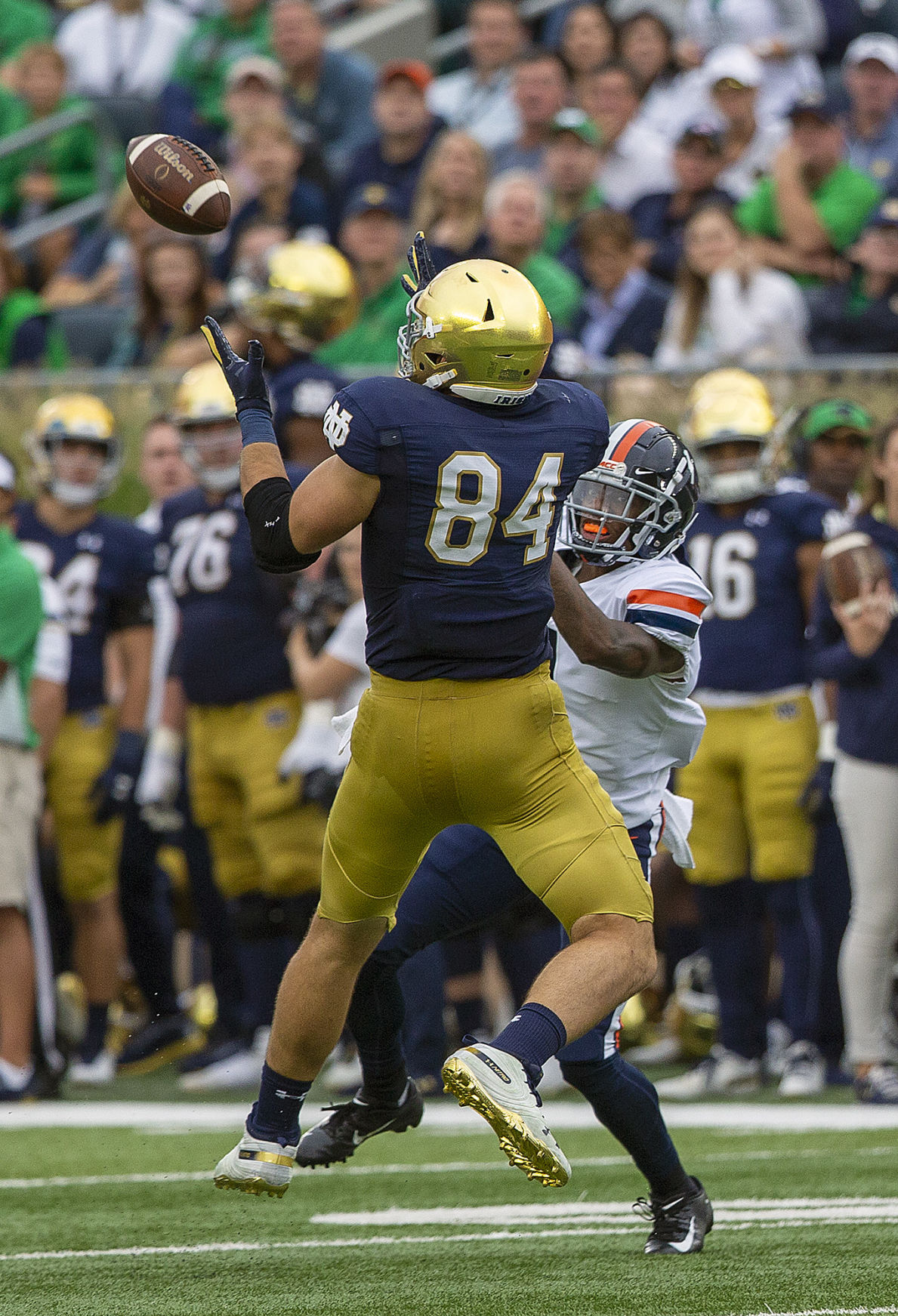 Notre Dame senior Ian Book (12) throws a pass while junior Cole Kmet, 84, tries to block Boston College junior Isaiah McDuffie (55) during Notre Dame’s 40-7 victory over Boston College on Nov. 23 at Notre Dame Stadium in South Bend. Book announced last week he will be returning to Notre Dame for a fifth season, while Kmet said Thursday he will be declaring for the NFL Draft.

SOUTH BEND — The dust has finally settled on where players from the 2019 Notre Dame football team will be in 2020.

Quarterback Ian Book and defensive end Ade Ogundeji are back. Tight end Cole Kmet, running back Tony Jones and safety Alohi Gilman are all heading to the NFL Draft. Defensive backs coach Todd Lyght is also leaving the program, and the 2020 roster picked up a graduate transfer in Northwestern wide receiver Bennett Skowronek.

Here’s what this all means for Notre Dame two months away from 2020 spring practices beginning.

Ian Book — “#BeatNavy,” “See you in 2020” and “Go Irish” is all Book had to say when he tweeted he will be coming back to South Bend for a fifth year.

After redshirting the 2016 season and seeing sporadic action in 2017 and early 2018, Book became the full-time starter for the Fighting Irish in Week 4 of the 2018 campaign. He led Notre Dame to the College Football Playoff that year and followed that up with an 11-2 season as a starter in 2019.

Book coming back is huge for Notre Dame, as it gives them an established quarterback for a team that has playoff hopes in 2020. Although he was shaky at times in 2019, he finished the season strong, giving him a lot of momentum heading into the offseason. Book has a chance to go down as one of the best quarterbacks in Notre Dame history if he has another big season.

Ade Ogundeji — This one wasn’t a surprise, as Ogundeji really didn’t come on for the Irish until the injury to senior Daelin Hayes on Sept. 28 (Hayes announced shortly after the injury he’d be coming back to Notre Dame for a fifth year as well).

Ogundeji’s best performance came Nov. 23 against Boston College, where he had six tackles and two sacks. In two seasons of playing, the soon-to-be graduate has recorded 51 tackles and 4.5 sacks. The graduations of Khalid Kareem and Julian Okwara clear a path for Ogundeji to start, opposite Hayes, for the Irish in 2020.

Cole Kmet — This will be the toughest player to replace for Notre Dame, as Kmet had a breakout 2019 campaign. The junior tight end had 43 receptions for 515 yards and six touchdowns, second most on the team in each category behind Chase Claypool.

Kmet said during the season he intended to come back to Notre Dame for a senior year, but the prospect of an NFL career was too much to overcome. Kmet was also a member of the Irish baseball team, meaning Notre Dame will be short one pitcher for the 2020 season.

With Claypool, Kmet and Chris Finke all departing, the leading receiver coming back will be tight end Tommy Tremble, who had 16 catches for 183 yards and four touchdowns in 2019. Notre Dame will be tasked with replacing more than 65 percent of its receptions and yards in 2020.

Tony Jones — Jones led Notre Dame with 857 yards rushing and six touchdowns in 2019. He had five 100-yard rushing games, including 134 yards in the bowl game victory over Iowa State.

Questions about Jones’ speed have been raised. He’ll get a chance to prove those doubters wrong during NFL Draft preparations.

Alohi Gilman — An expected move, Gilman meant as much off the field as he did on it for Notre Dame.

Gilman was a captain in 2019 after playing just one season prior for the Irish. After starting his career at the Naval Academy, Gilman transferred to Notre Dame and had to sit out the 2017 season. In 2018, Gilman played a key role on a defense that allowed just 18.2 points per game.

In his two seasons in South Bend, Gilman recorded 168 tackles, three interceptions and one sack.

Todd Lyght — Lyght, who was a two-time All-American cornerback for Notre Dame in 1989 and 1990, will not be returning to the coaching staff. Lyght had been the defensive backs coach since 2015.

“I’d like to thank Todd for his years of service to his alma mater,” Notre Dame coach Brian Kelly said in a statement Thursday. “He has been a valuable part of our staff, and his impact as both a player and coach here at Notre Dame will be lasting. As he leaves the university to pursue future endeavors, I’m grateful for everything Todd contributed, and we wish him, Stefanie and their family nothing but the best.”

Bennett Skowronek — Notre Dame picked up a grad transfer in Skowronek on Wednesday night. Skowronek will have one year of eligibility for the Irish.

A graduate of Homestead High School in Fort Wayne, Skowronek returns to his home state after three-plus years at Northwestern. In 36 games for the Wildcats, Skowronek tallied 110 receptions, 1,417 yards and eight touchdowns.

He was expected to finish his career this year in Evanston, but he suffered an undisclosed season-ending injury after three games that required surgery. This allowed Skowronek to redshirt and maintain a year of eligibility.

At 6-foot-4 and 215 pounds, he’ll provide a big presence on the outside for Book. Whether or not he has the skill set to replace a player like Claypool is to be determined.