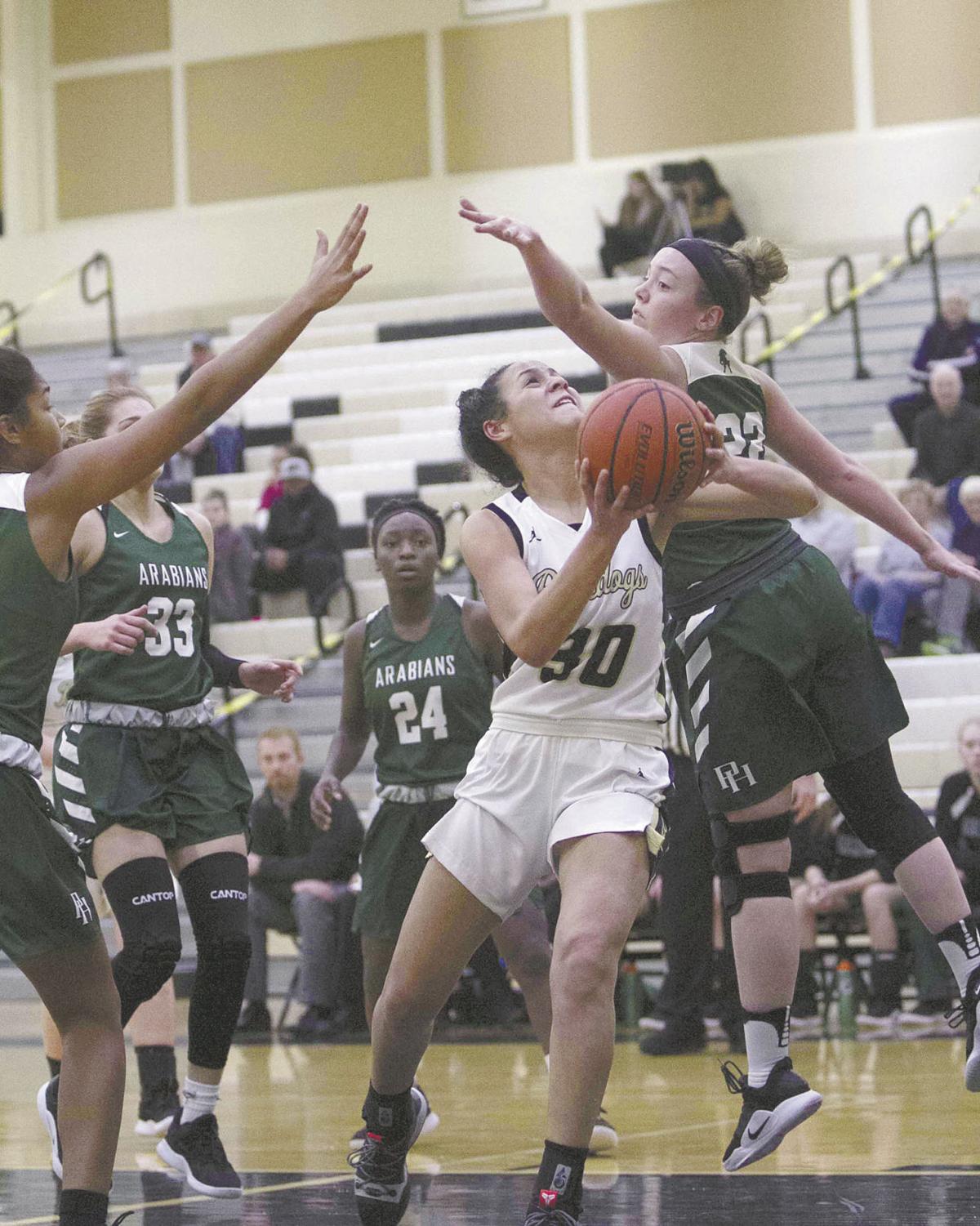 Lapel's Makynlee Taylor fights to get to the basket as she is surrounded by a group of Pendleton defenders. 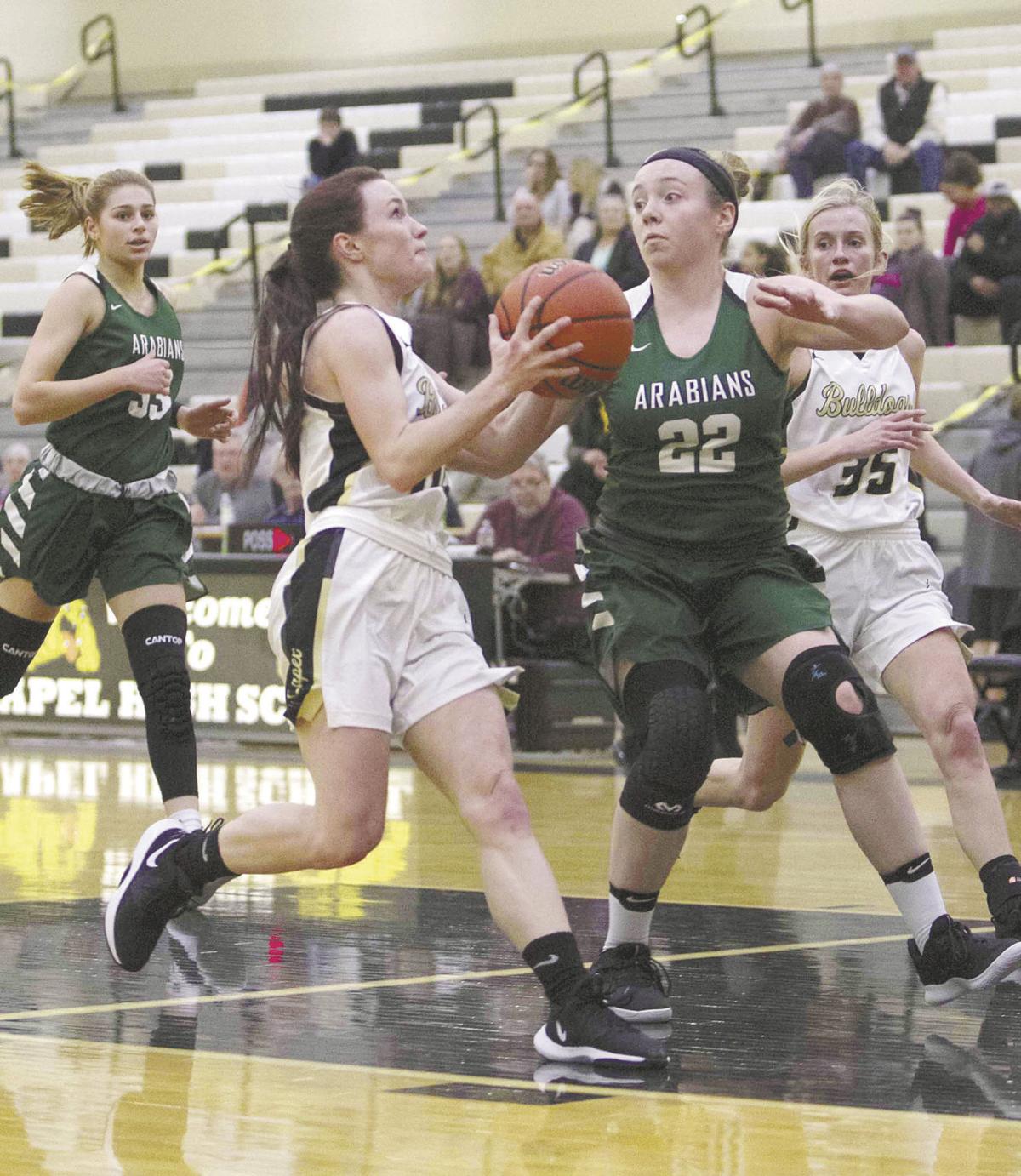 Lapel's Kylie Rich drives up the lane as Pendleton's Kailyn Graham steps in to stop her.

Lapel's Makynlee Taylor fights to get to the basket as she is surrounded by a group of Pendleton defenders.

Lapel's Kylie Rich drives up the lane as Pendleton's Kailyn Graham steps in to stop her.

LAPEL — With under 2 1/2 minutes left in the fourth quarter and Lapel's girls ahead of Pendleton Heights by 10, Bulldogs' coach Zach Newby reminded his squad the game was not over.

Newby was absolutely correct. Lapel, which led 48-37 a few seconds earlier, let a mild upset bid slip away and the Arabians forced overtime on a Kailyn Graham 3-pointer at the horn.

But the Bulldogs didn't quiver during the additional four minutes. They ran their offense, withstood a barrage of PH shots to tie or even go ahead and emerged 63-59 on senior night.

Lapel (13-7) scored the final six points, with a layup by Delany Peoples on a back-cut with 21.9 seconds to go breaking the 59-all deadlock.

Peoples and senior Kylie Rich both had 15 points, and Makynlee Taylor 14 as the Class 2A Bulldogs upended the 4A Arabians (11-9), who got 24 from Graham.

"When kids are put in that situation, you never know how they're going to react," Newby said. "That's a good team. I know they're down a couple (of key players), but that's a good team and they put pressure on us."

A 16-0 run over the final 5:09 of the first quarter, after PH went up 6-0, put the Bulldogs in the position they were in for the remainder of the contest.

Lapel led 23-22 at the half and built it up to nine on four occasions late in the third quarter and at the start of the fourth. The lead peaked at 48-37, when Anna Willis scored on a feed by Peoples with 3:18 left.

The Bulldogs still were up nine with 70 seconds to go, but the Arabians ran off nine straight points in quick order. Graham knotted it at 51 on a 3 after Megan Mills rebounded a missed free throw by Kylie Davis.

Rich was fouled and made her pair with 30 seconds remaining, and Paige Rich split a pair of free tosses with 8.6 seconds left, making it 54-51.

Graham rebounded a missed Arabian shot, and PH called time with 2.7 seconds showing. Leonie Wilson fed Graham on the inbound pass, and the senior fired away. It rattled around and in, and OT was impending.

Graham made another trey 10 seconds into extra time, but Lapel tied it, and then Graham converted on a Bulldog turnover and it was 59-57 PH with 1:20 left.

After Rich made a pair of foul shots to tie, Mills was fouled; however, she could get neither of her tosses to fall, and Lily Daniels rebounded for the Bulldogs.

Peoples, whom Newby said was a bit under the weather during the school day but was able to play, broke free from behind an Arabian and Paige Rich fed Peoples for the go-ahead bucket.

Graham had a 10-footer that would have tied it go out, and Mills rebounded twice and couldn't convert. Kylie Rich grabbed the second miss, was fouled and made both free throws to seal it for her Bulldogs.

"I'm glad that we won, but I wish we would have finished it off in regulation," Newby said. "But that's a good learning experience for us come tournament time. We're going to be in crunch-time situations where teams are going to be pressing, and we need to know what to do and where to go with the ball."

Paige Rich, another senior, had nine points and 10 rebounds for Lapel. Kara Lutz is the other senior Bulldog, and she started and played the first 2 1/2 minutes.

Wilson scored 13 and Mills had 12 along with 13 boards for PH, which fell to Lapel for the first time in 11 years.

Both teams play out the season on the road. PH is at Connersville on Friday for the second of four straight away before Sectional 9 at Mount Vernon. Lapel visits Muncie Central on Thursday and is at Wapahani next week, and plays in Sectional 40 at Sheridan.