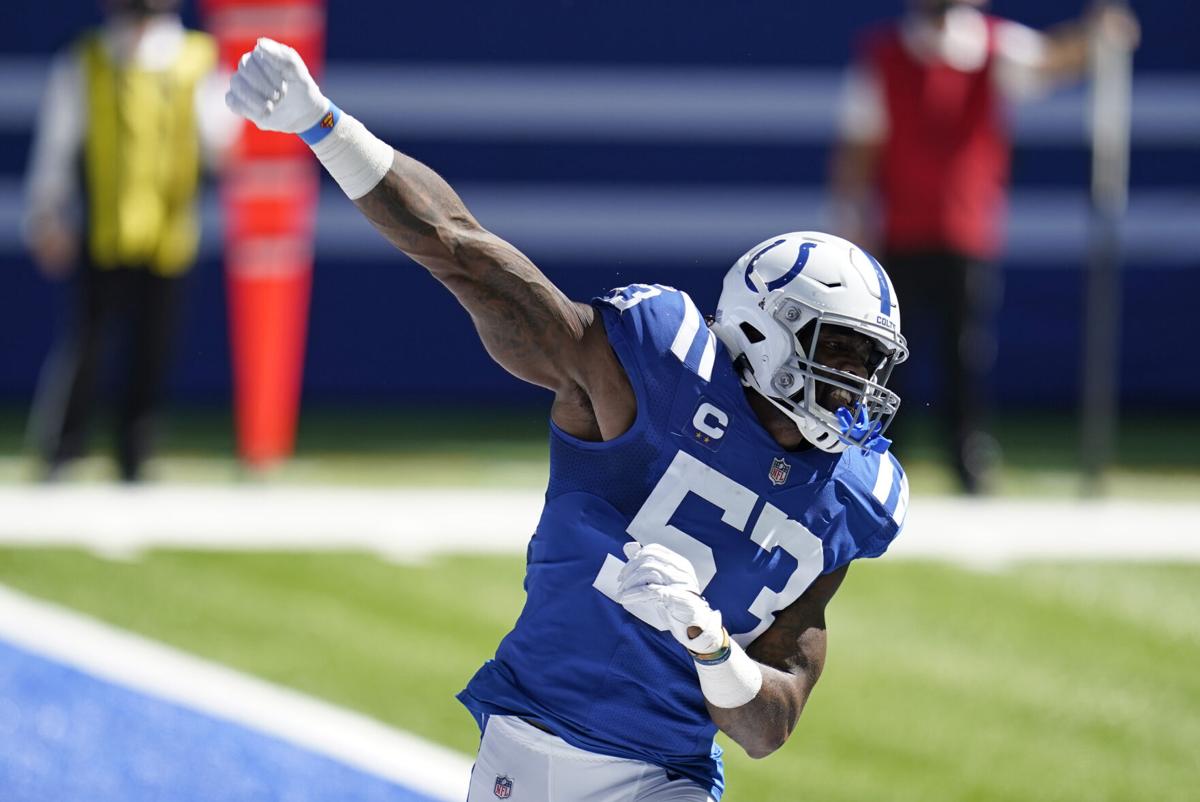 Indianapolis Colts outside linebacker Darius Leonard (53) celebrates a sack of Minnesota Vikings quarterback Kirk Cousins by DeForest Buckner during the first half Sunday in Indianapolis. 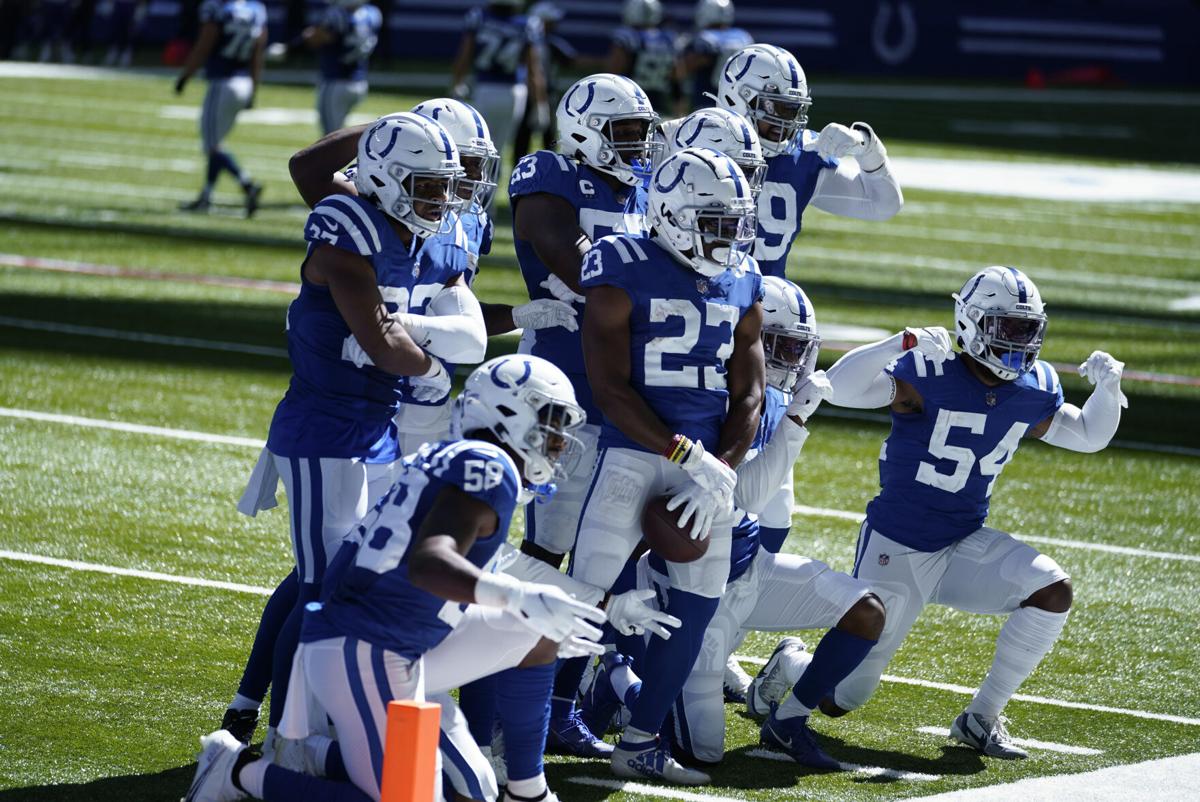 Indianapolis Colts’ Kenny Moore II (23) celebrates an interception with teammates during the second half Sunday against the Minnesota Vikings in Indianapolis. 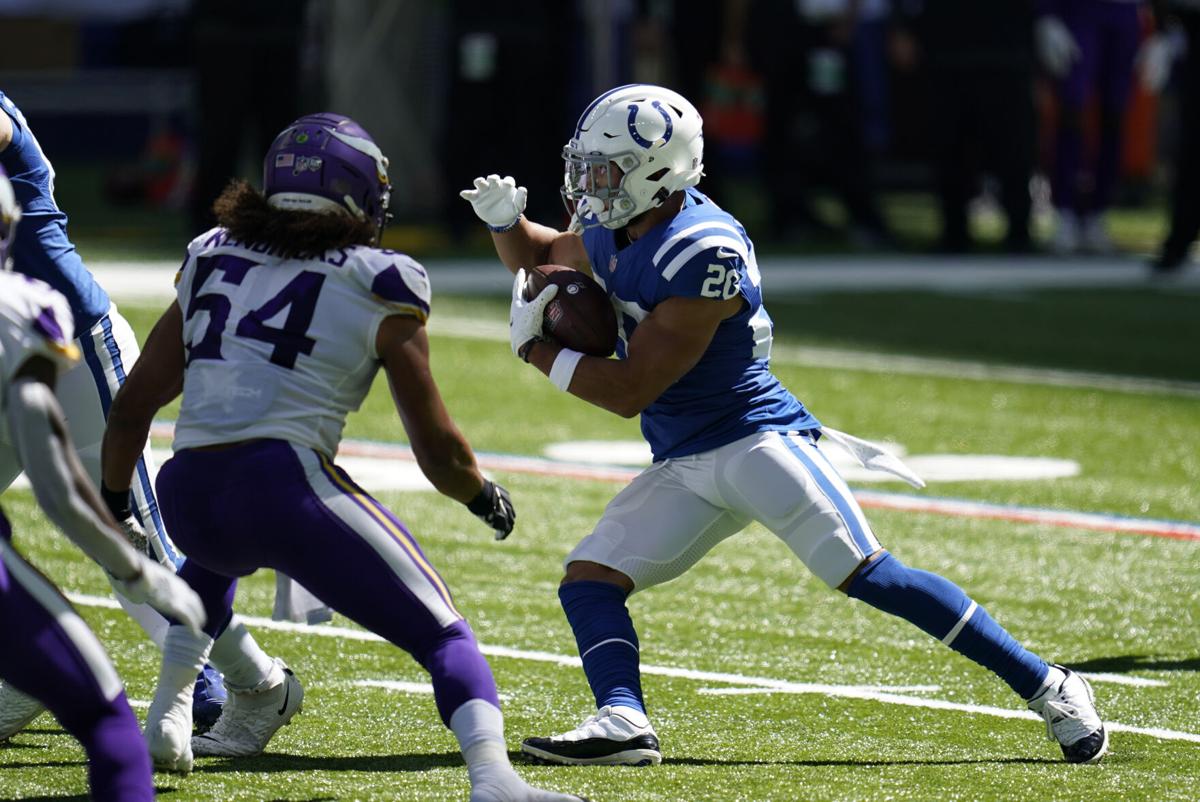 Indianapolis Colts outside linebacker Darius Leonard (53) celebrates a sack of Minnesota Vikings quarterback Kirk Cousins by DeForest Buckner during the first half Sunday in Indianapolis.

Indianapolis Colts’ Kenny Moore II (23) celebrates an interception with teammates during the second half Sunday against the Minnesota Vikings in Indianapolis.

The Indianapolis Colts got back to their identity Sunday – running the ball effectively, causing turnovers on defense and methodically pulling away for a 28-11 victory against the Minnesota Vikings at Lucas Oil Stadium.

“That’s what we wanted to see today,” Indianapolis head coach Frank Reich said. “That was the kind of game we expected.”

Reich had his highest praise for a defense that bounced back from a disastrous performance in last week’s opener at Jacksonville.

The Colts (1-1) sacked Minnesota quarterback Kirk Cousins three times – including once for a safety – and hounded him into 11-of-26 passing for 113 yards with three interceptions. Indianapolis also stuffed the Vikings’ rushing attack, limiting star running back Dalvin Cook to 63 yards on 14 carries and the team to 80 yards on 18 attempts.

“I don’t know if you can play much better than we played defensively,” Reich said. “That was an explosive offense. We were good for 60 minutes. You could feel it the whole game. Our defense kept the pressure on them. We stopped the run. We got turnovers. We made the statement we wanted to make defensively.”

And they did it with some unlikely faces in the lineup.

Cornerback Rock Ya-Sin was taken to a local hospital hours before kickoff with a stomach illness. Safety Malik Hooker left with an Achilles injury during the first half, and cornerback Xavier Rhodes missed much of the second half with cramps.

None of it seemed to slow the Colts’ D.

A week after limiting Jaguars quarterback Gardner Minshew to just a single incompletion in 20 attempts, Indianapolis got its hands on nine passes from Cousins in addition to the three interceptions. Kenny Moore II, Khari Willis and T.J. Carrie – who was filling in for Ya-Sin and Rhodes – each had a pick, and DeForest Buckner, Tyquan Lewis and Justin Houston each had a hand in the team’s three sacks.

Minnesota gained 60 yards on its opening drive — ending with a 21-yard field goal by Dan Bailey for its only lead – then got just 115 more on its final nine drives combined.

The Vikings’ only touchdown came on their final possession, with Cook scoring from 3 yards out and the game well in hand. Minnesota ran three plays or fewer on six of the nine possessions in between its scoring drives.

“We’ve been talking about it all year, our standards that we have on defense, and we gotta make sure that we uphold those standards as a unit,” Buckner said after recoding 1.5 sacks and four quarterback hits. “Today was just a little taste of what we can do moving forward.”

Things weren’t quite as dominant on offense, but Indianapolis did enough to get the job done.

Rookie running back Jonathan Taylor was the workhorse, carrying the ball 26 times for 101 yards and his first career touchdown. The second-round pick had 10 rushes in the first quarter alone in his first start after the season-ending injury to Marlon Mack.

It was a workload reminiscent of Taylor’s days at Wisconsin and something he’s very familiar with.

“After the first carry, you kind of get into that mindset,” Taylor said. “You break the ice, and you realize it’s still just football. So you kind of refocus, lock in and focus on your task at hand each and every single play. When you keep doing that play after play after play, next thing you know it’s the fourth quarter and if you’ve been doing that each play, the result should be in your favor.”

Taylor’s 5-yard run gave the Colts a 7-3 lead with 11:45 remaining in the first half and helped erase the taste of a disappointing opening drive.

Indianapolis reached Minnesota’s 8-yard line before a pass intended for tight end Mo Alie-Cox bounced off his hands and a defender’s before being intercepted by linebacker Eric Wilson.

The defense immediately forced a three-and-out, and most things went the Colts way from there on out.

Rookie Rodrigo Blankenship made field goals from 44, 38, 38 and 28 yards, Buckner’s sack produced a safety and Zach Pascal caught a 2-yard touchdown pass as Indianapolis built a 28-3 lead with 8:47 remaining in the game.

Philip Rivers was 19-of-25 for 214 yards with one touchdown and one interception. Alie-Cox was his favorite target, pulling in five catches for 111 yards, including a 27-yard grab to set up Pascal’s fourth-quarter score.

The Colts were just 3-of-11 on third down, and they’d like to finish more drives in the red zone. But the breakout tight end – starting in place of an injured Jack Doyle – summed things up as well as anyone.

“It was great to go out there and have a great day, but at the end of the day, it’s just one game,” Alie-Cox said. “And we know we have higher goals that we want to achieve.”