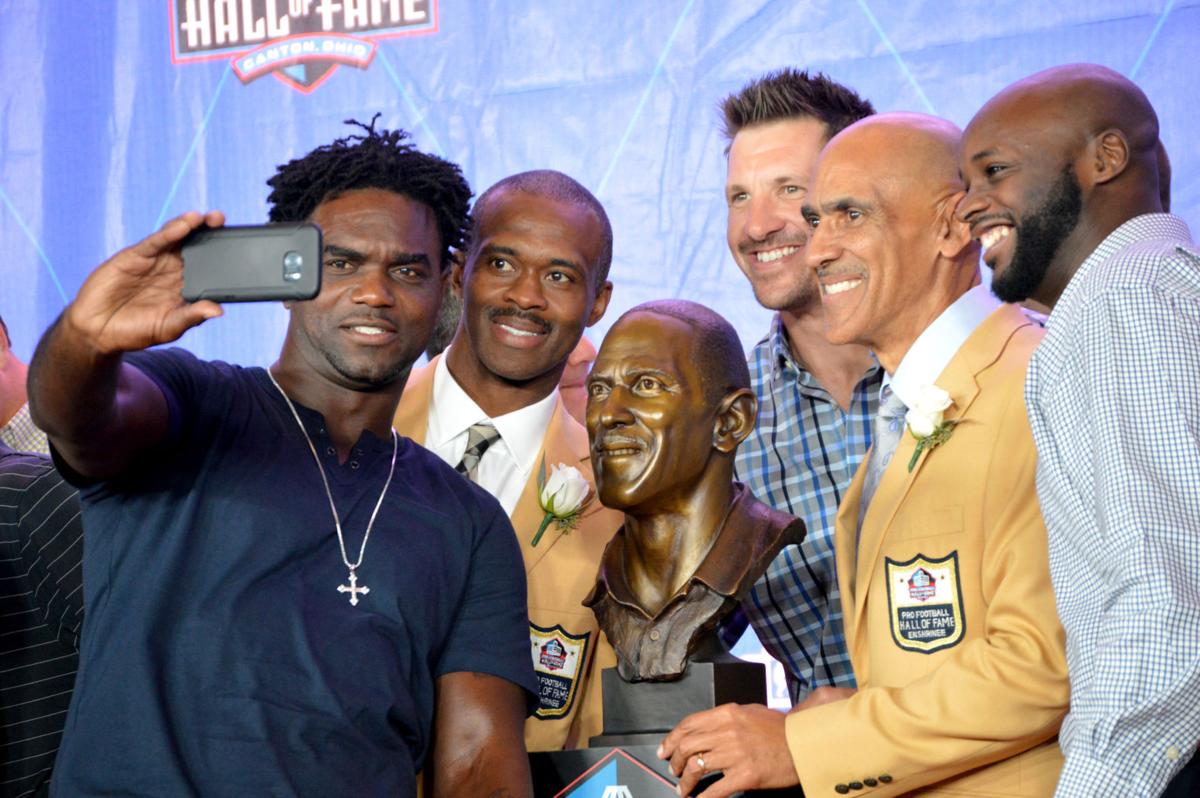 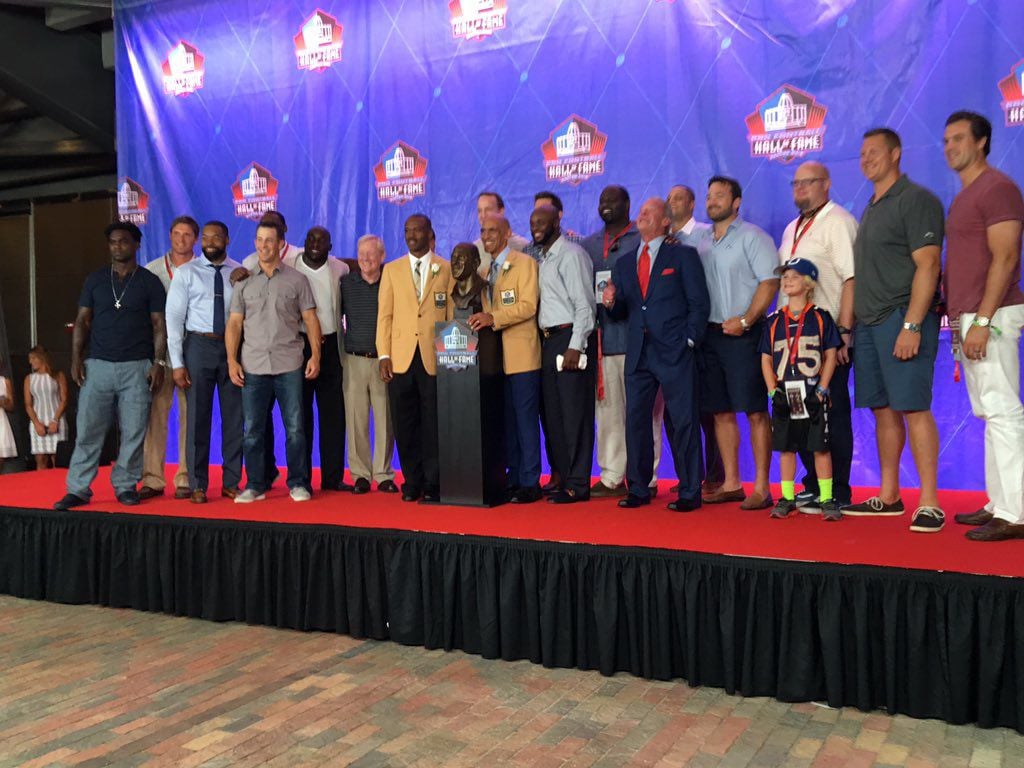 Former Indianapolis Colts head coach Tony Dungy (center, right) is surrounded by former players as he poses with his Pro Football Hall of Fame bust on Saturday in Canton, Ohio. 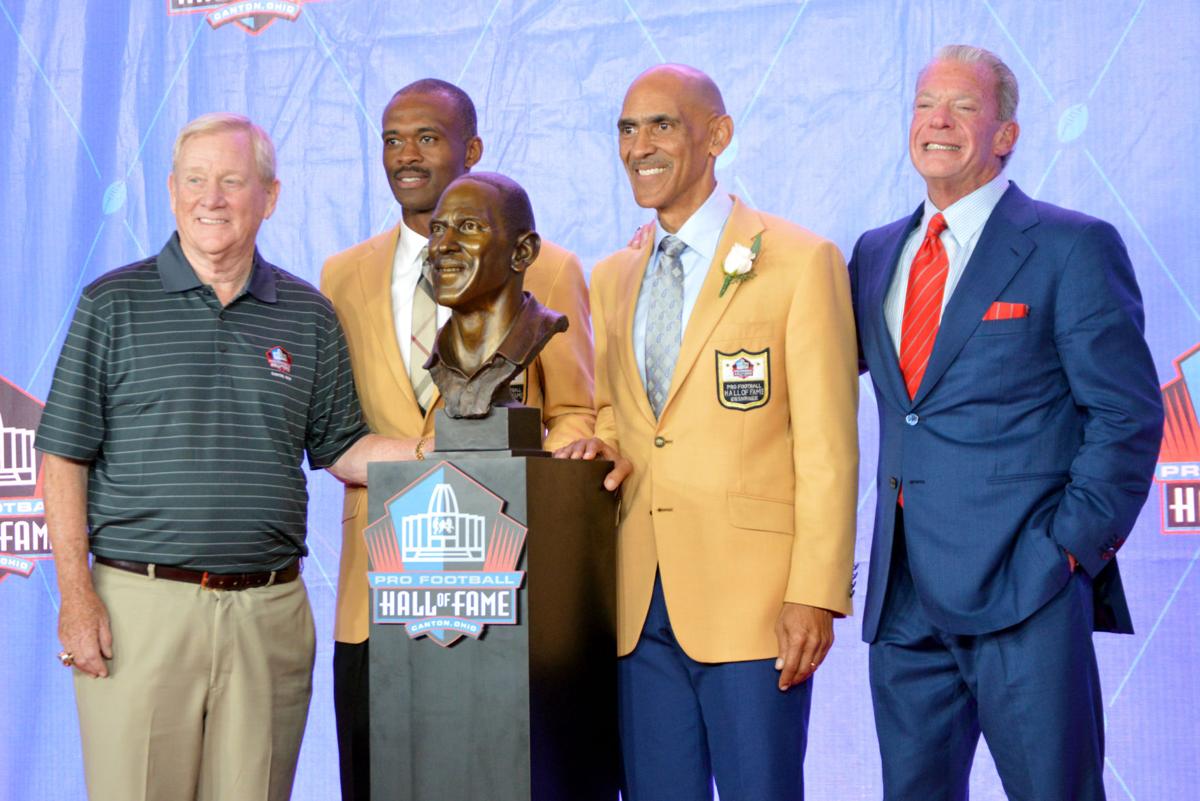 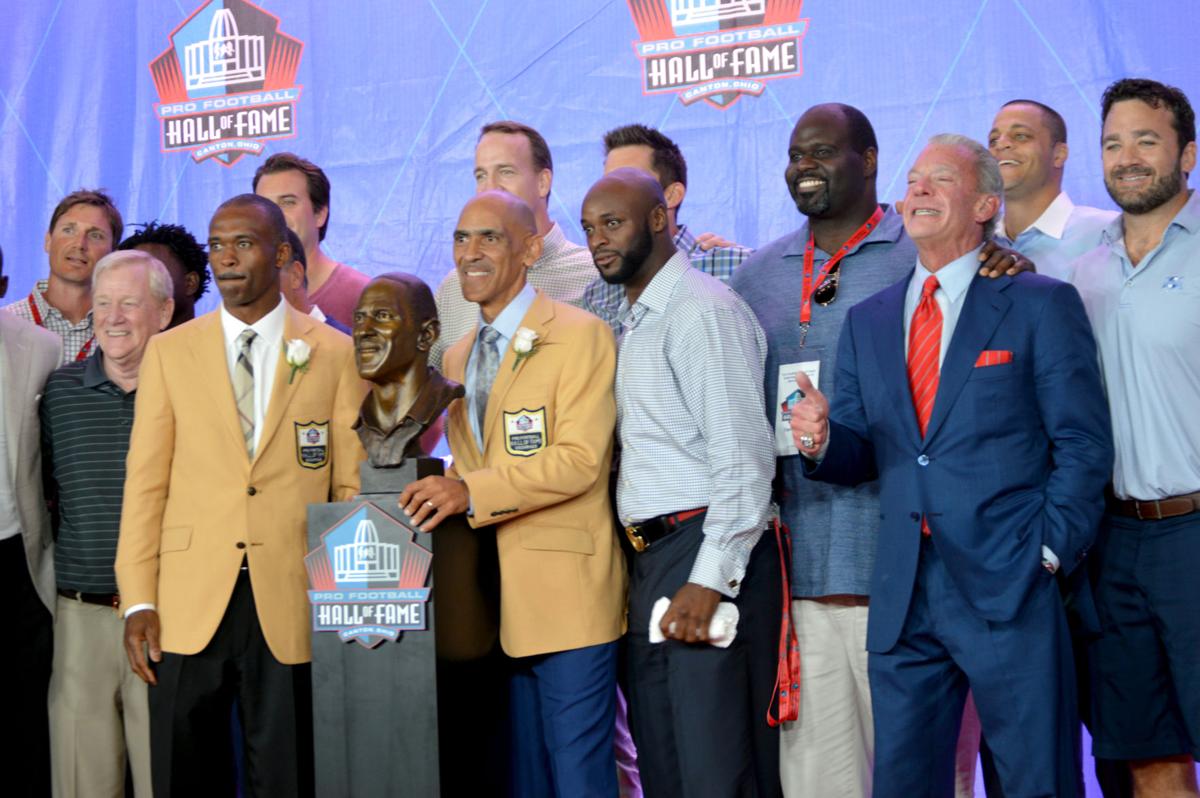 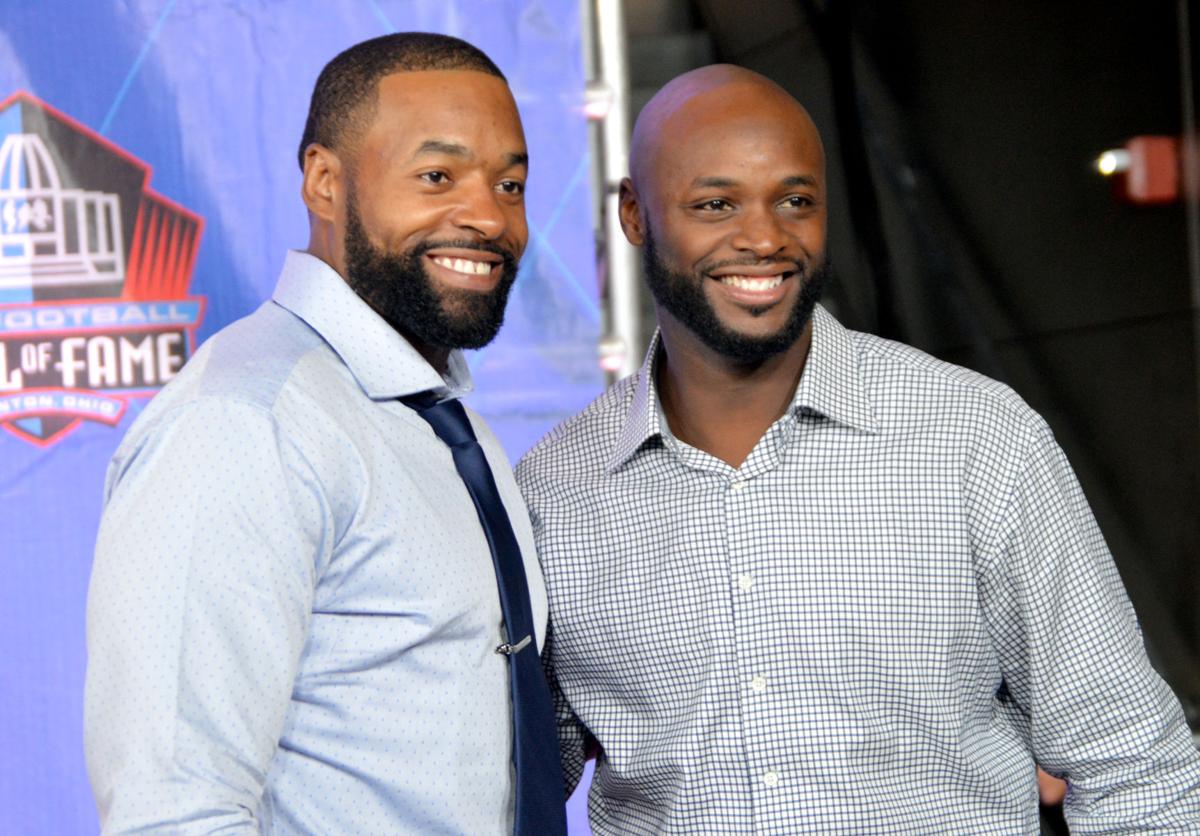 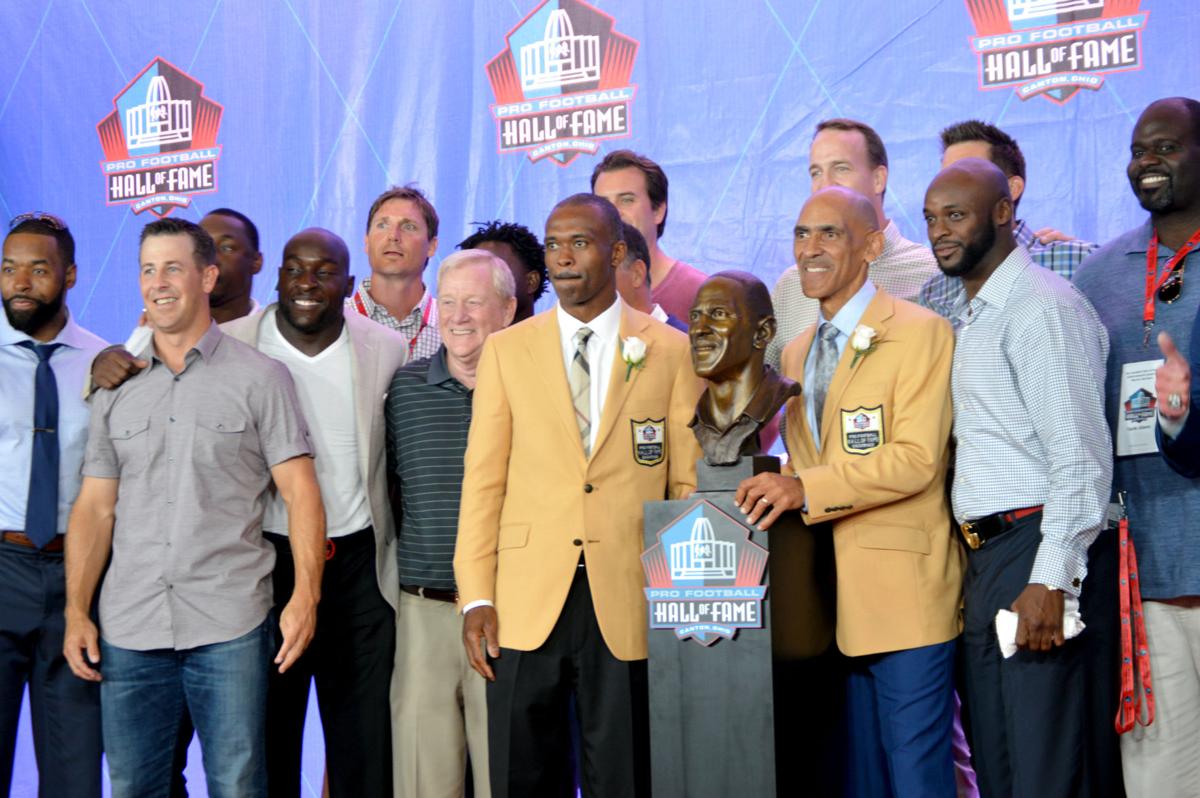 Former Indianapolis Colts head coach Tony Dungy (center, right) is surrounded by former players as he poses with his Pro Football Hall of Fame bust on Saturday in Canton, Ohio.

CANTON, Ohio — The stage for the post-speech photo opportunity Saturday was barely large enough to accommodate all the bodies.

Some 20 players huddled onto the makeshift riser around former Colts head coach Tony Dungy and his new Pro Football Hall of Fame bust.

It was a moment that brought together the three pillars around which Dungy has built his adult life: Faith, family and football.

Always in that order.

"I think we'd be of one accord," said former Steelers teammate Donnie Shell, who also played for Dungy in his first stint as an assistant coach, in a pre-speech video, "that he was more than just a coach."

That is likely the greatest compliment Dungy could receive.

He opened the biggest speech of his professional career by thanking his parents — Wilbur and Cleomae.

He said his father taught him to set high goals and never complain. And his mother instilled upon him the importance of serving God above any other job title.

Then Dungy recalled a Bible verse his mother often shared, and one she'd be proud to know he'd remembered all these years later.

Matthew 16:26: "What will it profit a man if he claims the whole world and forfeits his soul."

Dungy's soul was evident throughout the speech.

He used it not to recall his own accomplishments but to lift up others.

He closed by running down a list of the 10 black assistant coaches who were in the league when he entered as an undrafted rookie with the Steelers in 1977.

"I feel like I'm representing those 10 men and all the other African-American coaches who came before me and paved the way," Dungy said. "And I thank them very much."

The first black head coach to win the Super Bowl, leading Indianapolis to a 29-17 victory against the Bears following the 2006 season, Dungy joins Fritz Pollard as the only black head coaches enshrined in Canton.

He thanked another black man, former Vikings head coach Dennis Green, for helping him get there.

Green — who died earlier this year — made Dungy his defensive coordinator in 1992, and he taught the young coach that a man could be committed to the job and still make time for his family.

That stuck with Dungy more than any football lesson.

"I've thanked him many, many times over the years," Dungy said. "But I really wish I could thank him one more time tonight for everything he did to help me take that final step."

The final step came in 1996 when he became the coach of the Buccaneers.

He came to Indianapolis in 2002 and completed the ride, making the franchise into a champion and turning the city into a football town.

"You made us feel like native Hoosiers, and our family loves you," Dungy said to Colts fans from the stage.

Dungy had even more praise for the men who got him there.

He asked everyone in attendance who had ever played a game for him to stand. Many of them already were flanking him on the stage.

"Several of you are already in the Hall of Fame," Dungy said. "Others will surely follow them, and there's no doubt these guys are the reason for me being up here today."

If the post-speech scramble on the stage didn't prove it, allow Shell to confirm the feeling is mutual.

"If I had to use one word to describe Tony," Dungy's presenter said, "it would be 'awesome.'"