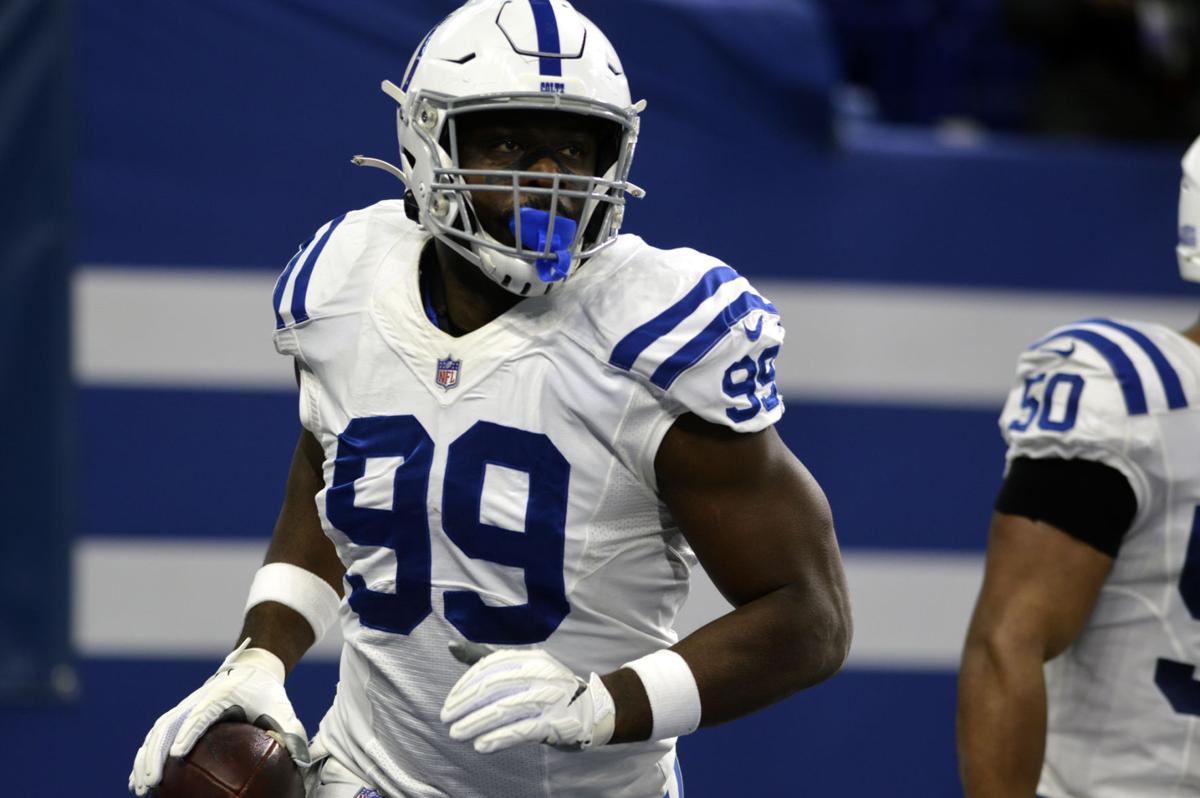 Indianapolis Colts defensive end Justin Houston jogs back to the sideline after recovering a fumble Dec. 1 against the Tennessee Titans at Lucas Oil Stadium. 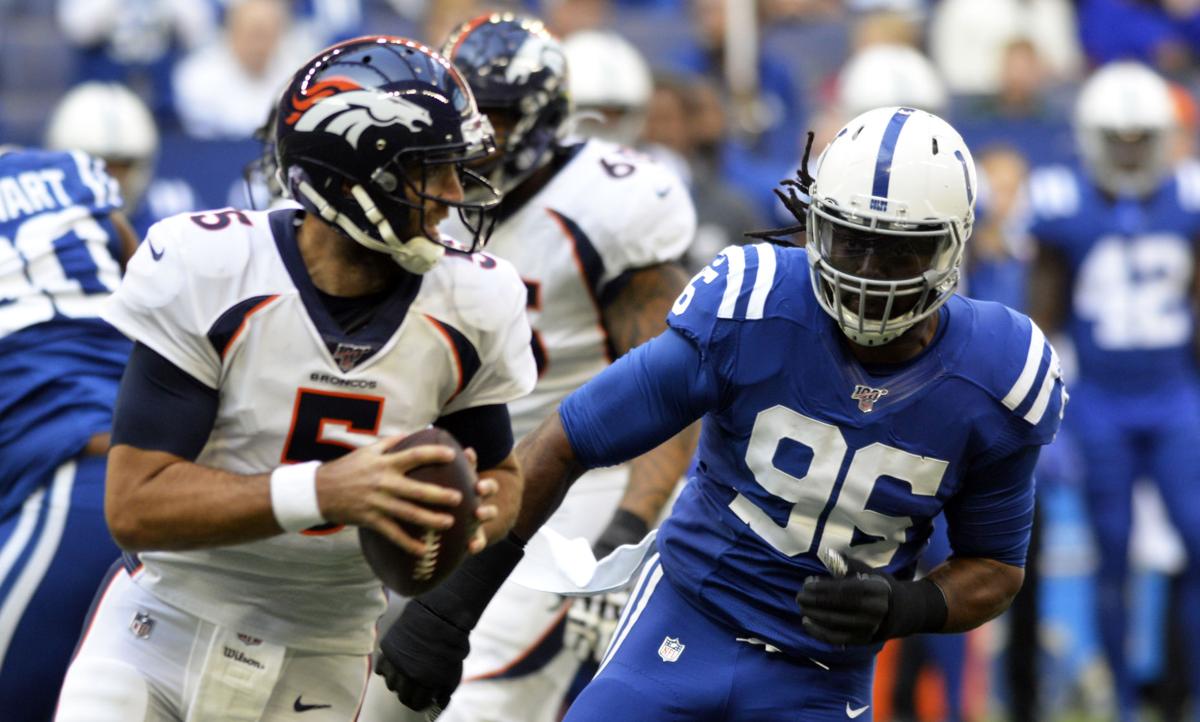 Indianapolis Colts defensive end Justin Houston jogs back to the sideline after recovering a fumble Dec. 1 against the Tennessee Titans at Lucas Oil Stadium.

INDIANAPOLIS — Justin Houston proved to be well worth the money in his first season with the Indianapolis Colts.

The veteran defensive end led the team with 11 sacks, his highest total since 2014, and finished with 13 tackles for loss and 18 quarterback hits. But the 31-year-old enters the final season of a two-year, $23 million contract in 2020 as the only firmly established player at his position.

The Colts believe the addition of defensive tackle DeForest Buckner will aid the pass rush and free up defenders all over the field to make more plays. But Indianapolis likely will need somebody to step forward on the edge to accomplish all of its defensive goals.

CNHI Sports Indiana’s Roster Review continues with a look at how the defensive ends stack up this spring:

Houston remains the Colts’ primary pass-rush threat and should benefit from the attention Buckner will draw from offensive lines. Another double-digit sack season certainly isn’t out of the question, especially with the aging star now fully adjusted to his new scheme and surroundings.

Things get interesting after Houston on the depth chart.

The battle to start opposite the veteran sack artist could be the summer’s most competitive and important roster clash. Three players likely will figure prominently – Denico Autry, Al-Quadin Muhammad and Kemoko Turay – in the race to replace departed free agent Jabaal Sheard.

Autry – who has the versatility to move inside to tackle and add speed to the pass rush in sub packages – has the most experience. The 29-year-old has 25 starts and 12.5 sacks in two seasons for Indianapolis, but his production took a steep decline in 2019. After a breakout season with nine sacks, 37 total tackles and 13 tackles for loss in 2018, Autry’s numbers dipped to 3.5 sacks, 32 tackles and just four stops for loss last year.

Muhammad is a rising 25-year-old with the size (6-foot-4, 250 pounds) to fill Sheard’s role as an edge setter. He continued to flash his potential with three sacks and eight tackles for loss last season and could be ready for a bigger role after making eight combined starts in his first two seasons with the Colts.

Indianapolis hopes Turay is the long-term answer, but he has to erase doubts on at least two fronts to be a starter in 2020. First, he must show he has fully healed from a gruesome ankle injury that ended his 2019 season in October. Second, he must show he can be trusted as more than a situational pass-rusher.

If he fails at the latter, Turay could again find a solid role in sub packages as a replacement for Autry or Muhammad while serving as Houston’s primary backup.

No matter how the personnel shakes out, an improved pass rush is a key to the Colts’ goal of finishing games more consistently in 2020.

“Closing out games really comes down to first and foremost, the most important thing is the pass rush,” Indianapolis defensive coordinator Matt Eberflus said. “I think with the addition of DeForest Buckner, Justin Houston getting healthy, Turay getting there — that will speed the quarterback up and we will have an opportunity to close out games with our pass rush and just the rush-and-cover and cover-and-rush aspect of it.”

There is also an intriguing group battling to join the starting conversation, led by 2019 second-round pick Ben Banogu. The 24-year-old appeared in all 16 games as a rookie but played on just 26% of the Colts’ defensive snaps.

Indianapolis flirted with a new role for the former TCU star in the spring, which would have seen Banogu play as an off-the-ball linebacker in the base defense and become a wide-set defensive end in base packages. That plan was scrapped early in the summer, and Banogu was able to focus solely on defensive end. He finished with 11 tackles and 2.5 sacks in limited action.

Another second-round pick, Tyquan Lewis, has struggled with injuries and failed to find a consistent fit through his first two seasons. Lewis made six starts and recorded two sacks as a rookie playing primarily at defensive end in 2018. Last year, the former Ohio State star kicked inside to tackle and made just five tackles without a sack in nine appearances.

A healthy training camp and a role that includes at least spot duty on the edge could help Lewis get back on track this summer.

The remainder of the depth chart consists of players looking to make an impact for the first time. Kendall Coleman is an undrafted rookie out of Syracuse who graduated from Indianapolis Cathedral and has been training with former Colts star Robert Mathis. Gerri Green was a sixth-round pick in 2019 who returned to the practice squad at mid-season after a brief stint with the New England Patriots. And Jegs Jegede spent last season on injured reserve as an undrafted rookie out of Valdosta State.

This is the ninth story in a 13-part series breaking down the Indianapolis Colts' 2020 roster. The series continues with a look at the linebackers.