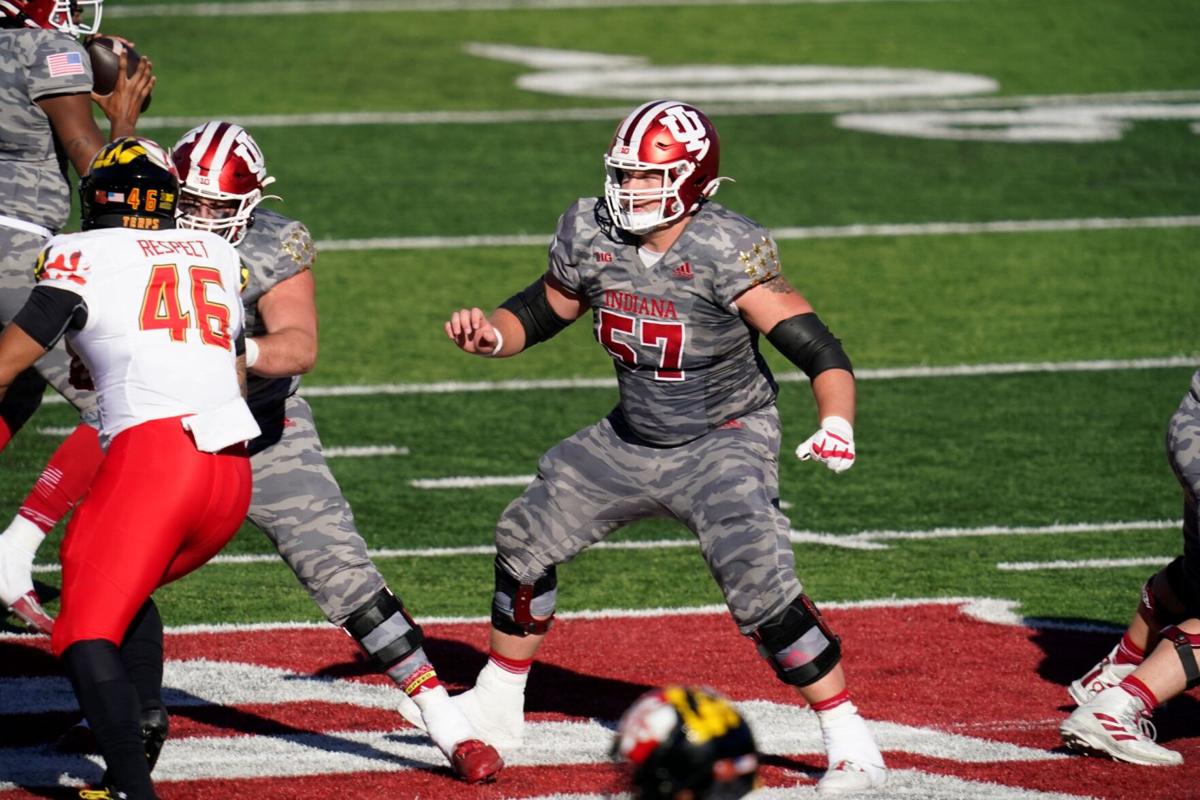 Indiana offensive lineman Harry Crider sets for a block against Maryland on Nov. 28, 2020, in Bloomington. 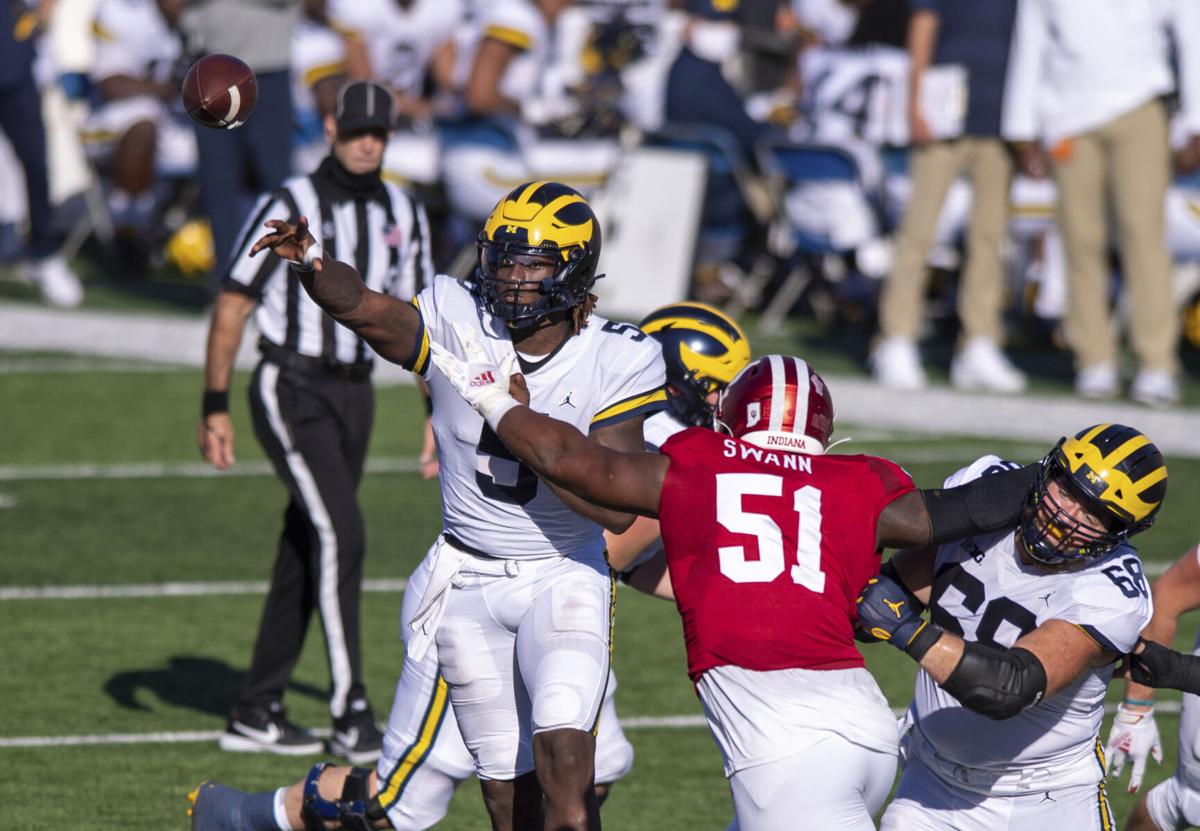 Michigan quarterback Joe Milton (5) gets a pass away as Indiana defensive lineman Jovan Swann (51) closes in on him Nov. 7, 2020, in Bloomington. 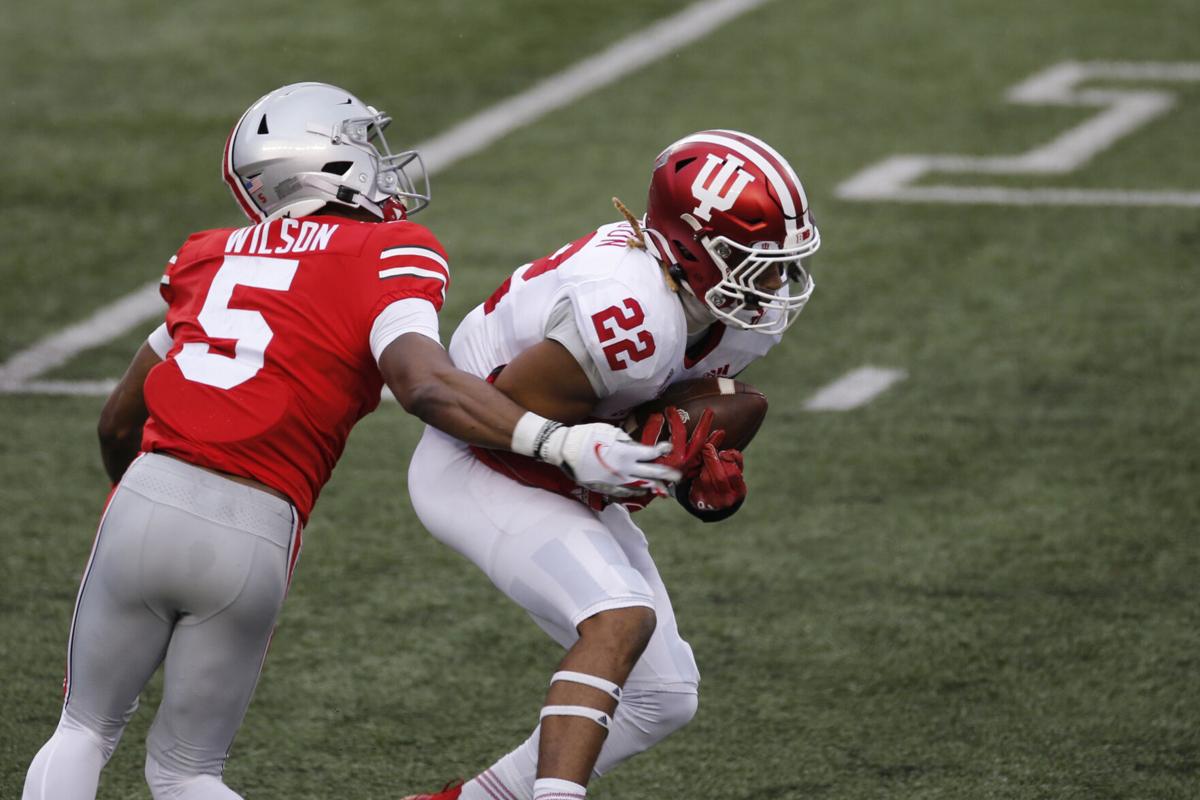 Indiana offensive lineman Harry Crider sets for a block against Maryland on Nov. 28, 2020, in Bloomington.

Michigan quarterback Joe Milton (5) gets a pass away as Indiana defensive lineman Jovan Swann (51) closes in on him Nov. 7, 2020, in Bloomington.

“Really great day for our guys,” Allen said. “I thought they came in well prepared. You just think about the way you perform at that moment. There is so much that goes into it, you know. People sometimes don’t quite sometimes know how much stress those guys feel on that day to perform in the jumps and the lifts.”

Swann and Crider both were strong on the bench press, with Swann doing 34 reps of 225 pounds and Crider doing 21 reps. Johnson, meanwhile, impressed scouts with his vertical leap of 35 inches.

Allen also mentioned Scott was in good physical shape and Philyor surprised some scouts with his strength to go with his speed.

“Great way for us to showcase a small group but a very talented group,” Allen said. “More than anything, I shared this with the scouts: These guys came here and they believed in the vision for what we could become at Indiana, and they helped create that vision on the field. So a really special group of guys.”

Allen confirmed rising junior running back Sampson James has been limited in practice due to a lingering lower leg issue from the end of the 2020 season.

“My big thing is I want to make sure he’s 100% healthy coming out of spring,” Allen said.

Allen said James hasn’t been getting hit during spring practice. But Allen said James has done everything that’s been asked in terms of conditioning and mental reps and has taken to the guidance of new running backs coach Deland McCullough.

“We saw a glimpse of what Sampson James could be, the way he played against Purdue in the 2019 Bucket Game,” said Allen, referring to James’ 118-yard rushing game against the Boilermakers. “To me, that's what I used to say, 'Hey, that’s the Sampson James that I know you can be in a Big Ten game.’ It’s just about getting healthy, continuing to get healthy and getting developed at a high level.”

Indiana honored linebacker Micah McFadden and quarterback Michael Penix as its Most Valuable Players at its 2020 awards ceremony last week.

Sophomore quarterback Jack Tuttle earned IU’s LEO award, while running back Davion Ervin-Poindexter and wide receiver Christian Harris earned the inaugural Chris Beaty Outstanding Walk-On Players of the Year Award. The award was named in honor of Beaty, an IU defensive lineman from 2000-03 and Indianapolis Cathedral graduate, who was tragically shot and killed May 30, 2020.

Indiana junior offensive lineman Caleb Jones discussed issues he had with his weight last season because of not having a full offseason of strength and conditioning in 2020 due to the COVID-19 pandemic.

“The COVID offseason was definitely one of the toughest offseasons I ever had as a player,” Jones said. “Not having the structure that you are used to that I’ve had my entire life during the offseasons that I’ve had in my offseasons here, it definitely threw everybody off. It threw me off a lot as well, trying to make sure that I got the work done.”

“This year is different,” Jones said. “We’ve got structure. We’ve got a great strength staff, and our coaching staff is here. Everyone is together, and we’re really trying to get better out here. I’m definitely happy about having a normal offseason this year because last year was definitely tough.”