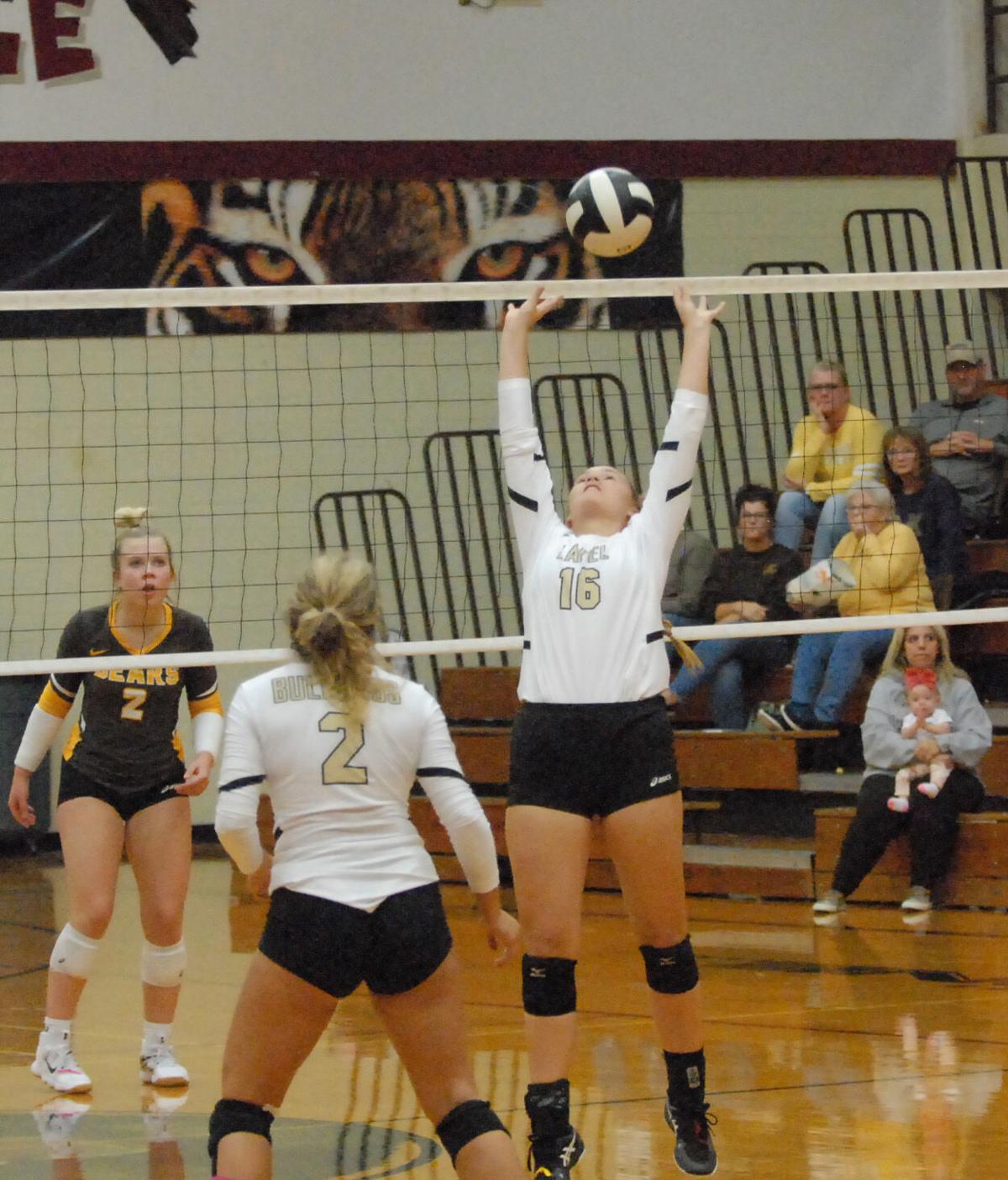 Lapel’s Madison Ake sets the ball over the net during Tuesday’s sectional match against Monroe Central at Alexandria. 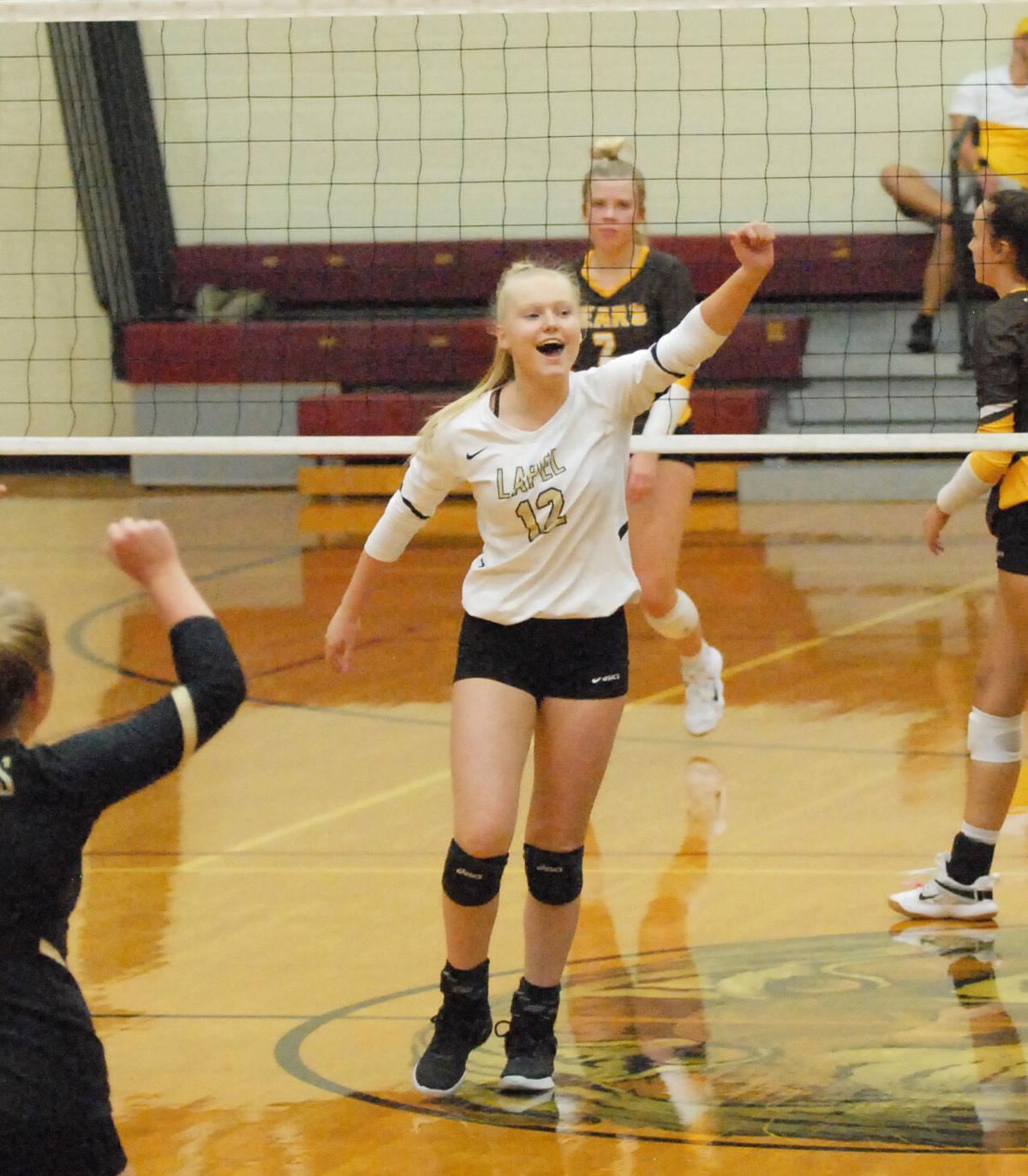 Lapel’s Elizabeth Stern raises her fist after a point. 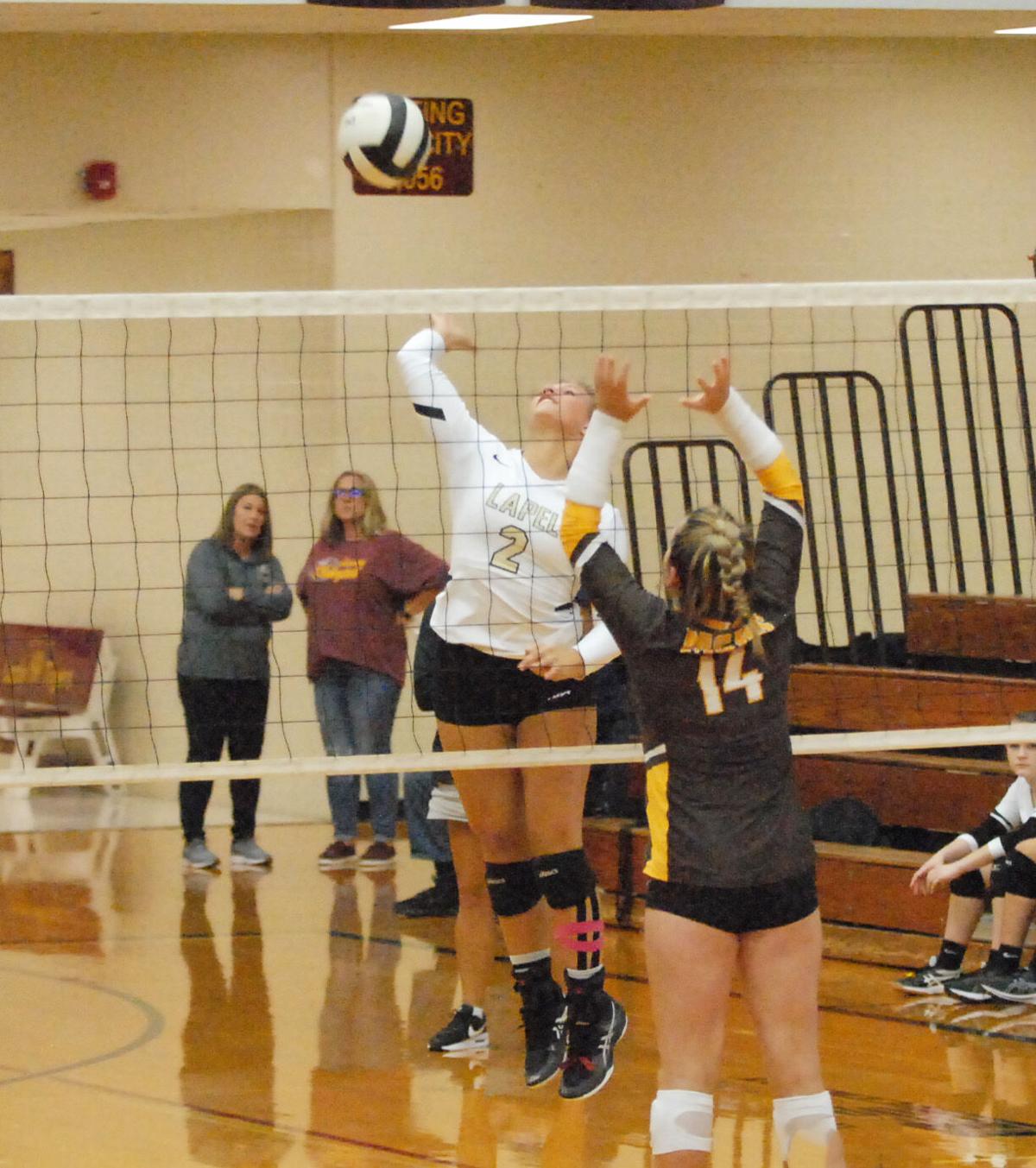 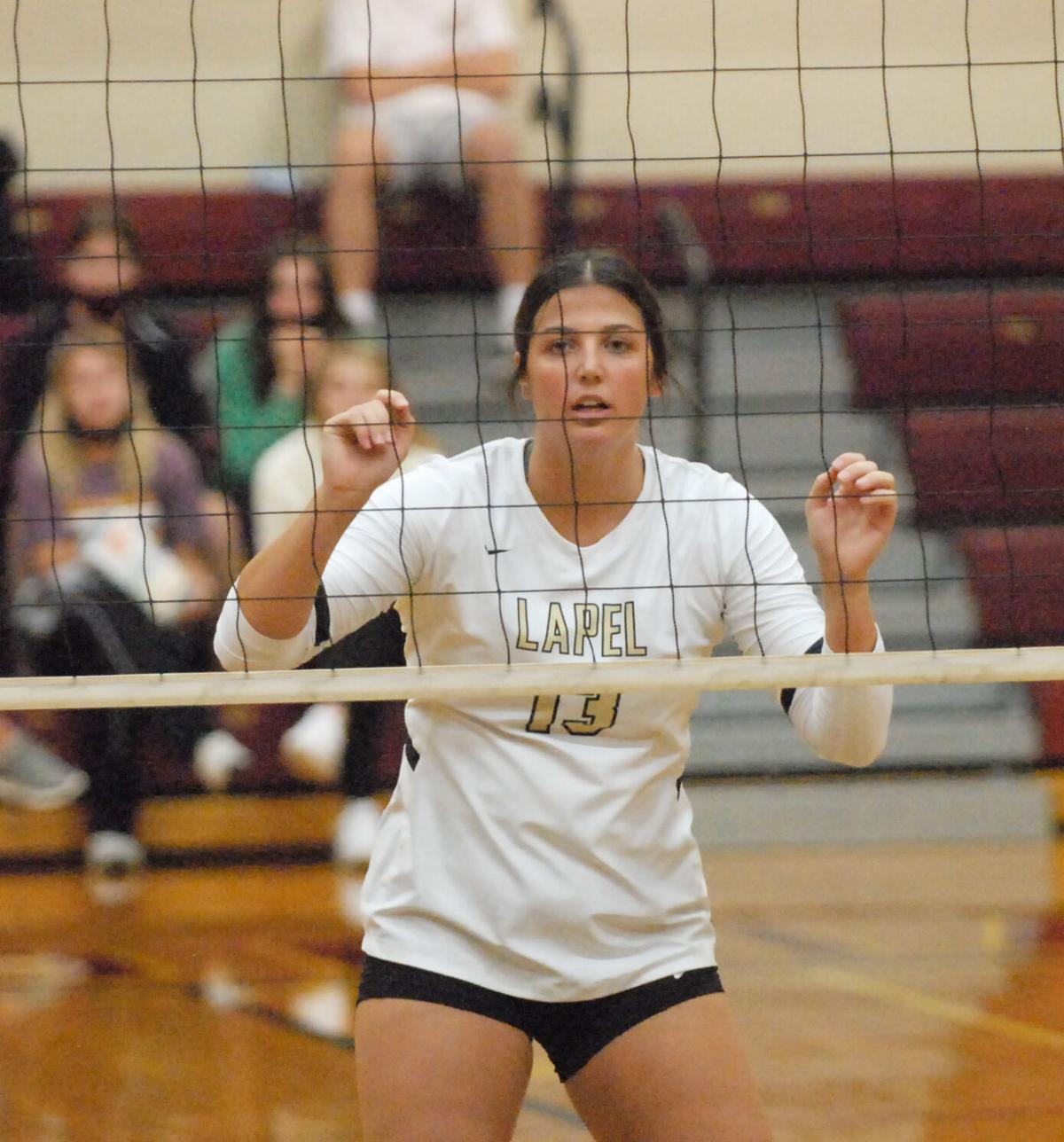 Lapel’s Ashlynn Allmann gets ready for a Monroe Central serve. 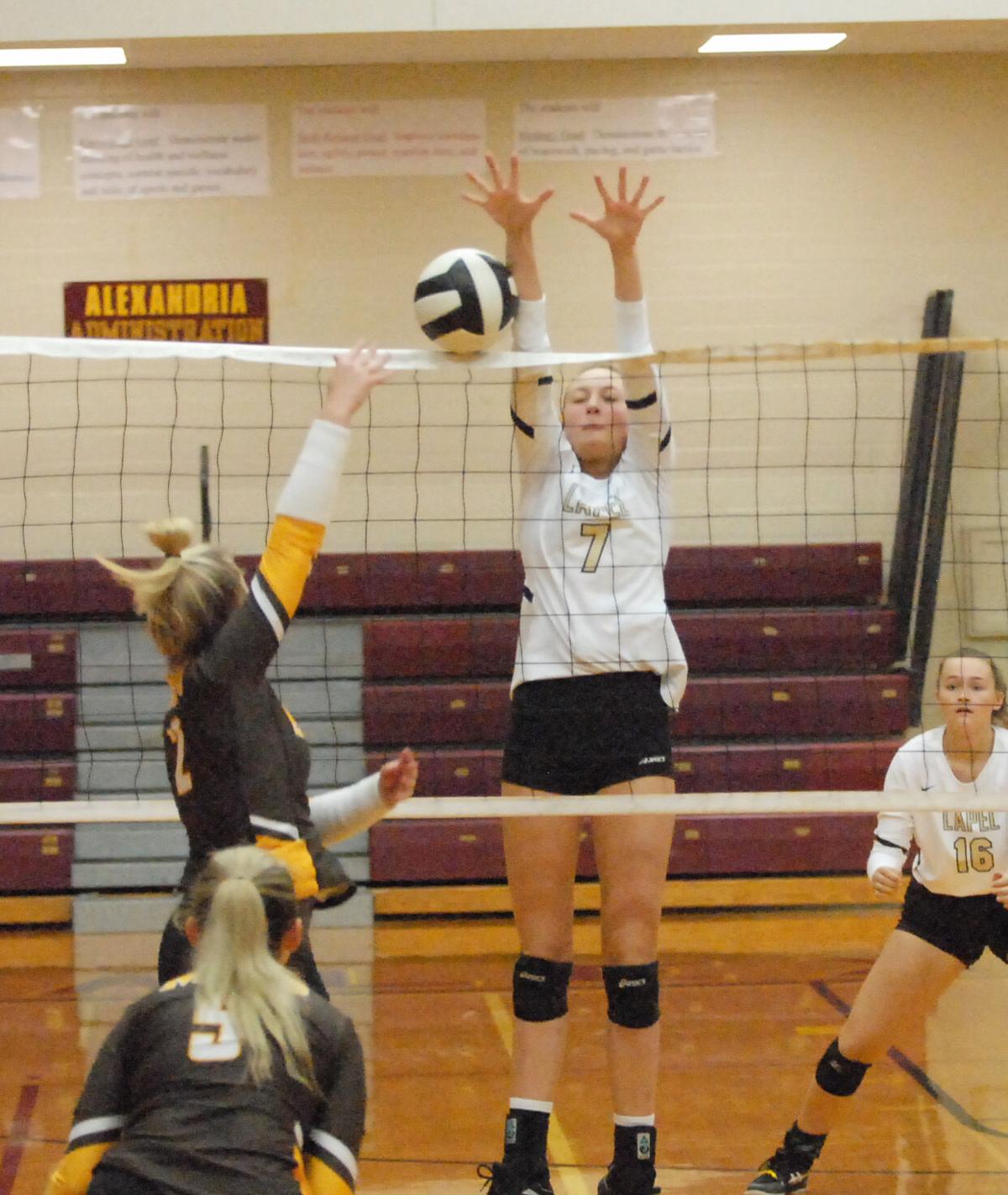 Lapel’s Madison Ake sets the ball over the net during Tuesday’s sectional match against Monroe Central at Alexandria.

Lapel’s Elizabeth Stern raises her fist after a point.

Lapel’s Ashlynn Allmann gets ready for a Monroe Central serve.

ALEXANDRIA — Two axioms common in sports are adversity reveals character and when a teammate goes down, the next in line has to be ready to take over.

The Lapel volleyball team proved both to be true Tuesday evening.

Lapel (16-12) advances to Saturday’s semifinal round when it will face the host Tigers at 11 a.m., followed by the winners from Thursday’s first-round matches between Elwood and Cowan and Frankton and Winchester. The Panthers and Blackhawks start the evening’s session at 6 p.m.

The Bulldogs were without the Jackley sisters — senior setter Emma and sophomore libero Sophie — after the two were ruled out Monday morning due to contact tracing.

Sophomore Madison Ake made her first varsity start as setter, while a number of players stepped up their game for the Bulldogs.

“We’ve been moving people around in practice just trying to figure out the pieces of the puzzle for the postseason,” Lapel coach Hilary Eppert said. “It looked pretty good out there. I don’t know what’s going to happen next, but I was super pleased with Madison and super pleased with Tatum (Harper) playing libero.”

Ake had one practice Monday and the pre-match warmups to work on timing with Lapel’s hitters, including senior Ashlynn Allman. But the chemistry worked well Tuesday as the Bulldogs turned around a 3-2 loss at Monroe Central in September.

“I was pretty nervous, but it wasn’t as bad as I thought it would be,” Ake said.

“Yeah, we just figured it out the day before and started working hard,” Allman said. “I love it. (The younger players) worked so hard.”

Lapel let a five-point lead slip away in the opening set and nearly overcame a five-point deficit in a match that was back and forth early.

The Bulldogs led 14-9 on a Harper ace, but the Golden Bears charged back with a 14-4 run to pull ahead 23-18. Lapel pulled within one at 24-23 on an Elizabeth Stern kill, two Maryn Landis aces and a kill from Emma Anderson before Monroe Central closed out the final point for a 1-0 lead.

Ake, who finished with a match-best 41 assists and added a pair of aces, said she felt more comfortable after getting a set under her belt.

“The first set and getting warmed up and seeing how Monroe Central played,” she said. “It’s different hitters in JV, too … and I figured that out and it was easier.”

“She learned a lot,” Allman added.

The second set appeared to be headed for a similar result. After Lapel jumped out to a 10-3 lead, Monroe Central chipped away and eventually took a 23-22 lead. But, after a serving error by MC and an Allman kill, the Bulldogs came back to tie the match at 1-1.

Lapel took a big lead again in the third set, but this time there was no let up.

But, in the fourth, MC scored four straight points after trailing 17-10 and set the stage for a pivotal moment.

Golden Bears senior Alex McGrath — who led MC with 11 kills and three blocks — hammered a ball toward the floor. But freshman Harper, filling in at libero, dug the ball off the court to Ake, who found Paska for the kill to end the run and any hopes for the Golden Bears.

“Those are momentum killers for the other team,” Eppert said.

Monroe Central did not score again until Lapel led 23-14.

Monroe Central finished its season at 11-16 after dropping its third straight match.

At Sectional 9 in Yorktown, Pendleton Heights swept Greenfield-Central 25-13, 25-12, 25-11 behind 11 kills from Avery Ross and a 10-dig, four-ace night for Ramsey Gary. The Arabians will face Mount Vernon on Saturday morning in the semifinals.