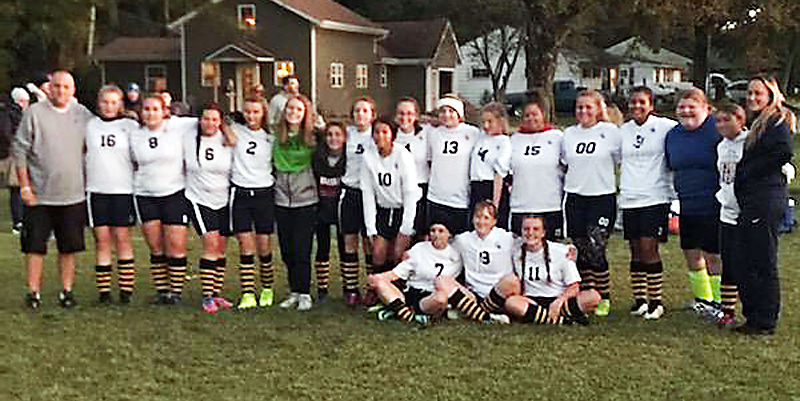 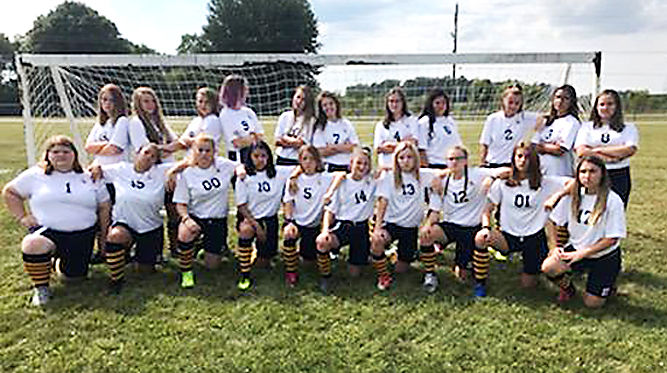 Shenandoah Girls Soccer Club players pose in front of the net last season. Coach Alison Merritt is hopeful that the program can eventually develop into a varsity program.

Shenandoah Girls Soccer Club players pose in front of the net last season. Coach Alison Merritt is hopeful that the program can eventually develop into a varsity program.

MIDDLETOWN — The cancellation of school and spring sports in March presented plenty of heartbreak for teams, athletes and coaches everywhere, especially at Shenandoah. The boys basketball team saw its state tournament run end after sectional, and defending state champion Erikka Hill would not have an opportunity to defend her shot put title.

For Alison Merritt, the disappointment was doubled. Not only would the Raiders softball team she coaches not have an opportunity to play, but the developing soccer program she has championed over the past year would have its progress halted.

Started in 2019 as a club option for athletes, Merritt was to submit soccer to the school board for approval to compete as a junior varsity team this fall and at the varsity level in 2021. But that ended in March with the cancellation of school and the ongoing coronavirus pandemic.

“I was supposed to submit the team to the school board on (March) 17th, and hope for a JV team,” she said. “But, of course, all that got shut down.”

Although softball is Merritt’s passion, she also played soccer growing up in Tennessee. She sees soccer as a viable second option to cross country for spring athletes — including her own softball team — to stay in shape during the offseason.

“The best way to stay in shape is to run, and I wanted to do something that was competitive, so (my parents) stuck me in soccer, and I loved it,” she said. “It’s physical, it’s aggressive and I believe you run over seven miles during a soccer game.”

The process began when Merritt was approached by several students interested in starting soccer. Despite fall being a crowded sports season and the logistics issues of obtaining equipment, the club’s first season saw tremendous turnout.

“It offered another fall sport for girls,” she said. “And it’s fun. Being a part of a team is the best part of sports. … We had 22 girls out there. That’s a solid team with plenty of subs. I’d like to have 30 plus, but for the first year, I was really happy about it.”

Although the club got a late start, the Raiders did manage to get several games in against middle school teams from Pendleton and New Castle. Merritt said the team improved from getting some shots on goal in the opener to players achieving hat tricks late in the season, including one by senior Rylee Johnson against New Castle.

“The improvement was there. I saw it, the kids saw it and the other teams saw it,” Merritt said. “Those teams are younger, but they are kids who have been playing soccer all their lives. Some of them had skills that most of our girls do not have.”

Although a girls only program for the time being, Merritt hopes to expand soccer at the school in the future.

“We were going to do coed, but we’re trying to establish a soccer program for both girls and boys at Shenandoah,” Merritt said.

But, like everything else in the sports world, the progress of the fledgling program is on hold as Indiana waits to see what happens this fall.

“We don’t feel it is appropriate at this time to go forward as it puts more kids at risk,” Shenandoah athletic director Todd Salkoski said via email. “We will revisit this at a later date, perhaps even this fall after we see what is happening with the virus.”

Should fall sports return in some form this fall, Merritt said soccer will remain at the club level for another year, but she knows schools are focusing on preparations for the problems and possibilities of playing volleyball and football this fall at the same time.

“I completely respect (that decision),” Merritt said. “There are so many things that have to happen, and there’s still going to be precautions that have to be in place. … And I get it. I don’t want to put any more stress on anybody. I just asked (Salkoski) that, if we were back in school, could I keep the club going? And he didn’t see a problem with that.”

Despite the setback, Merritt is still hopeful the program can eventually move forward and gain popularity at Shenandoah.

“I only had three seniors last year, and I heard some middle school girls were super pumped about soccer at Shenandoah,” Merritt said. “They had been playing through club and then weren’t going to have it in high school. I’ve had a lot of people reaching out to me asking when we’ll be able to practice or play, so I’m still expecting a good turnout.”