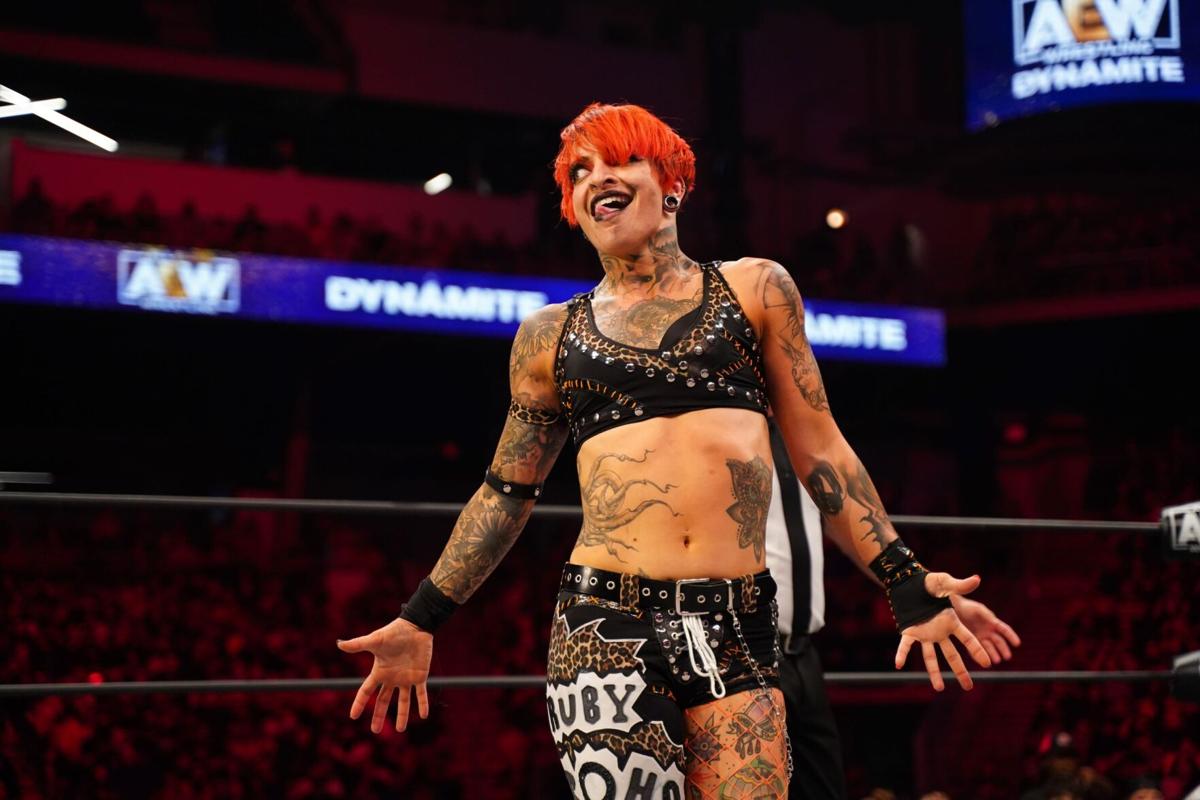 Ruby Soho awaits her opponent in the ring during AEW Dynamite on Sept. 8 in Cincinnati, Ohio. 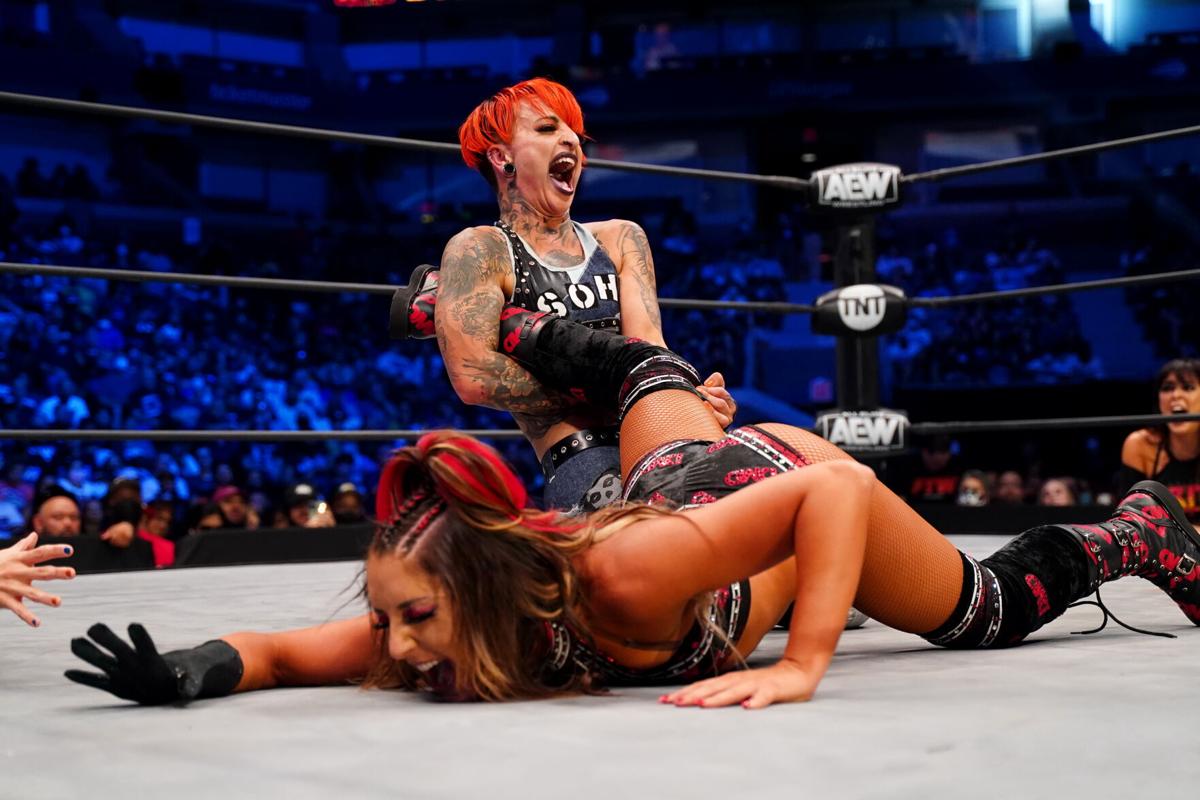 Ruby Soho makes her entrance during AEW Rampage on Oct. 15 in Miami, Florida.

All Elite Wrestling
1 of 2

Ruby Soho awaits her opponent in the ring during AEW Dynamite on Sept. 8 in Cincinnati, Ohio.

INDIANAPOLIS — The moment of truth was near, and Ruby Soho was experiencing a few opening night jitters.

The 30-year-old was about to make her surprise debut in All Elite Wrestling in front of 10,126 hardcore pro wrestling aficionados at Chicago’s Now Arena. The “All Out” pay-per-view on Sept. 5 was a paradigm-shifting event for the two-year-old company, and Soho’s appearance was rumored for weeks.

But it had never been confirmed.

The vehicle for the debut was the Casino Battle Royale, a match with 21 participants that awarded the winner a title shot against AEW women’s world champion Britt Baker. The first 20 wrestlers enter the ring in four groups of five spaced three minutes apart. The concept for the match is that each wrestler has drawn a playing card, and the suit – spades, diamonds, clubs or hearts – determines with which group she will enter.

The final participant is the “Joker,” the spotlight reserved for Soho. As the clock ticked down toward her entrance and her stomach tightened, something unexpected happened.

The crowd began chanting her name – “Ruby So-ho, Ruby So-ho” – even though they’d never met this particular iteration of her character.

“I love the question just because I get to relive that – I guess, really that moment – and I get to see it in my head, and I can hear them again – especially considering I had not gone by Ruby Soho at that moment in time, and to hear them chant a name that I hadn’t even been called yet, almost saying, ‘We’re welcoming this version of you already before we even see you,’ was magical to me,” Soho said during an exclusive interview with CNHI Sports Indiana.

“And as soon as I heard it, I turned to some of my friends that were standing outside of the stairwell with me, and I just put my hands up (covering her mouth and nose). Tears well up in my eyes, and I was like, ‘Oh, my goodness, this is home. I, these people are already — I haven’t even been out there yet.’ I knew I had to suck it up ’cause I had to go wrestle, but it was an amazing moment for me, honestly, and I am so grateful. … It’s something that I will legitimately never forget for the rest of my life. It was the pinnacle of my career.”

To truly understand the heavy emotion behind those words, it’s necessary to know about Soho’s journey.

She was born in South Bend as Dori Prange and spent part of her youth attending independent wrestling shows in and around Elkhart with one of her best friends, whose older brother was a wrestler. At the time, she was drawn to the colorful characters and over-the-top stories but had little interest in the in-ring work.

Soho didn’t give pro wrestling much more thought until her sophomore year of college when she returned to a live show and got caught up in the art. She wasn’t sure what she wanted to do for a living and thought wrestling looked like a fun way to earn money.

So she got herself booked in a local backyard promotion, and a whole new world opened before her eyes.

“And I fell in love at that moment I stepped foot into the ring. So, from then on, it seemed like I just followed the one thing that made me happy, and that was wrestling.”

The road led to Lafayette and the School of Roc, led by Indiana indie legend Billy Roc.

Soho spent 10 months training inside a wrestling ring tucked inside a storage unit with no heat or air conditioning. And she couldn’t be more grateful for it.

“If it wasn’t for Billy, there would be no Ruby Soho,” she said. “So I billed myself from Lafayette, Indiana, one ’cause I spent quite a bit of time there. But two because that’s where my roots came and also to pay homage to (Roc) for basically starting my journey that is professional wrestling.”

Soho made her pro debut for Juggalo Championship Wrestling as Heidi Lovelace in 2010. By 2016, she’d nearly reached the industry’s summit – debuting for World Wrestling Entertainment as Ruby Riott in the developmental NXT brand.

A year later, she was on the main roster as the leader of the Riott Squad on WWE Smackdown – wrestling before a national audience every week.

Her time with the world’s most famous wrestling promotion was bittersweet, however. The self-described “punk rock kid from Indiana” clearly connected with the audience. But her bosses never quite seemed to understand the best way to exploit her popularity.

Pushes – wrestling lingo for being spotlighted more on television and inserted into more important storylines – were inconsistent. On June 2 this summer, Soho was released and became a wrestling free agent.

Ironically, leaving the WWE marked the moment her career really took off.

She was gifted a theme song – “Ruby Soho” – by Rancid front man and new friend Lars Fredriksen, and she produced a series of online vignettes teasing her next move.

Many fans correctly guessed she was headed to upstart AEW – the hottest pro wrestling company in the world – and those predictions came true that fateful night in Chicago.

Soho won the Casino Battle Royale and challenged Baker for the world championship on a special episode of AEW Dynamite on Sept. 22 as the main event during the promotion’s debut at Arthur Ashe Stadium in front of 20,000 fans in New York City.

She lost that match, but she might not have stopped smiling ever since.

On Wednesday, she’ll return home when Dynamite comes back to Indianapolis for the first time since 2019. Soho is not in any of the matches that have been announced so far for the card that will air live on TNT at 8 p.m., but it’s always best to expect the unexpected in pro wrestling.

No matter her involvement on the show – or lack thereof – Soho is proud to come back to Indiana, just an hour or so from where her wrestling journey began, with a company that is unquestionably changing the business.

Watch the full interview with Ruby Soho, including her thoughts on being a role model for young girls, the importance of the new TBS title in the women's division and the unique environment at live AEW shows in our video at heraldbulletin.com.