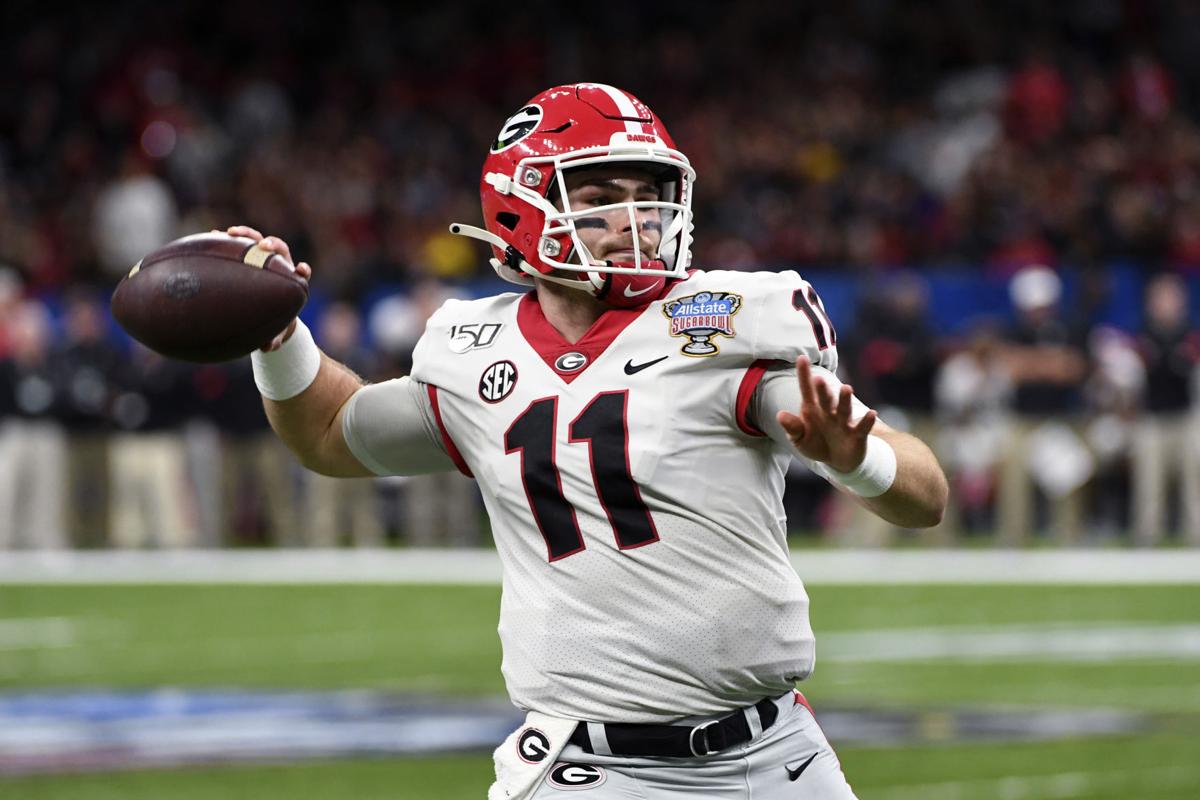 Georgia quarterback Jake Fromm passes in the first half of the Sugar Bowl against Baylor in New Orleans on Jan. 1. 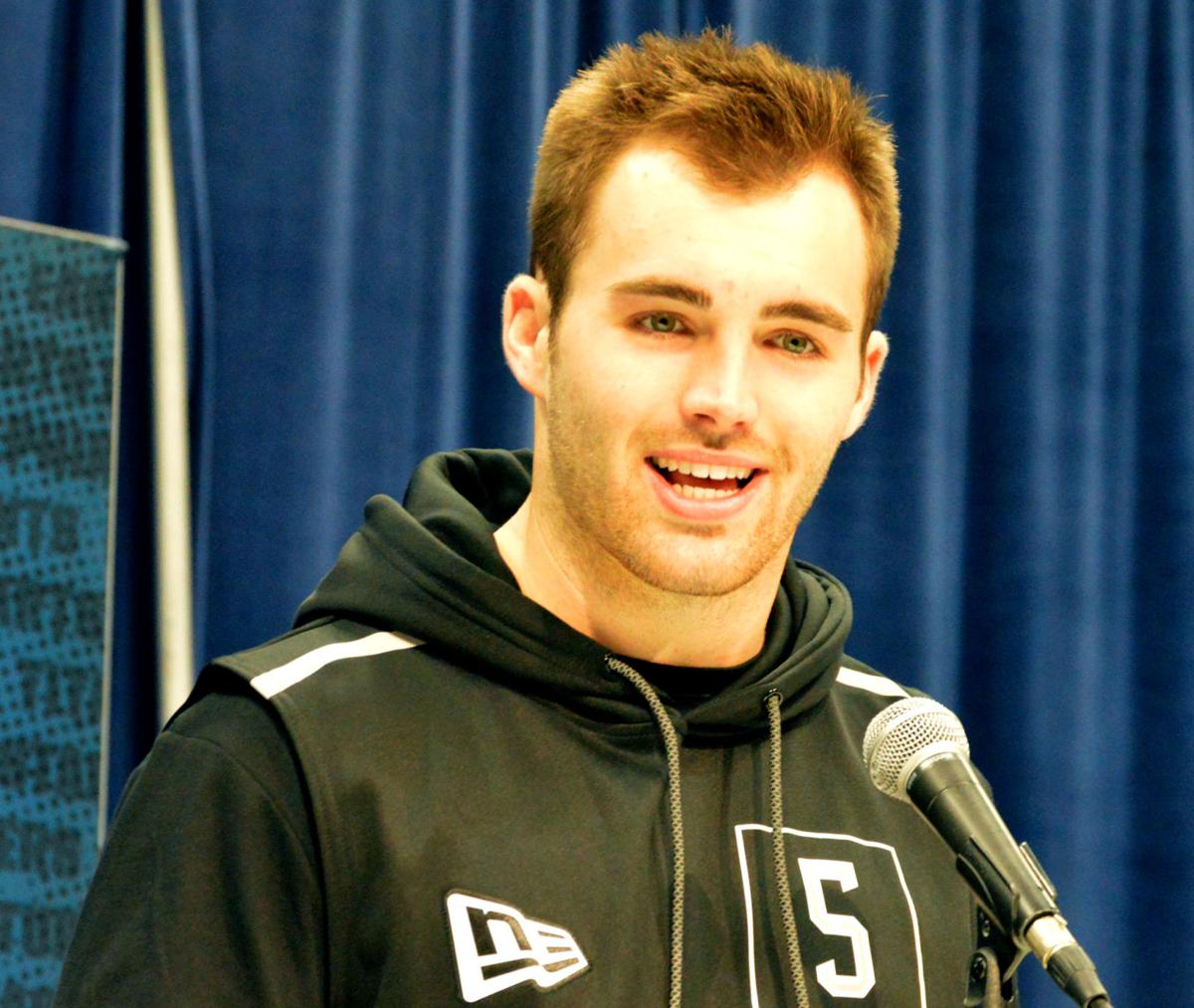 Georgia quarterback Jake Fromm answers a question in February at the NFL Scouting Combine in Indianapolis.

Georgia quarterback Jake Fromm passes in the first half of the Sugar Bowl against Baylor in New Orleans on Jan. 1.

Georgia quarterback Jake Fromm answers a question in February at the NFL Scouting Combine in Indianapolis.

The former Georgia star made his first career start as a true freshman on the road against Notre Dame. He stared down Nick Saban’s Alabama teams in the national championship game that season and again with the Southeastern Conference title on the line the following year. And he chased off two five-star would-be challengers to remain the Bulldogs’ starter.

So doubts about his ability to succeed at the NFL level aren’t likely to rattle Fromm.

“This has been a dream of mine since I’ve been a kid,” he said during the NFL Scouting Combine in February. “I really want to be a professional. I was ready to make this next step and play professional football.”

From the shoulders up, Fromm appears to have everything necessary to succeed.

Georgia head coach Kirby Smart gave him extensive control of the offense at the line of scrimmage, and he’s noted for his ability to read defenses and get his team into the correct play.

Fromm also is seen as a natural leader with excellent character.

But he lacks the physical tools that would make him a first-round pick.

His deep ball fluttered during Combine workouts, and there are questions about whether he has the power to drive passes to the outside hash marks and properly stretch NFL defenses.

It’s a limitation the quarterback is well aware of and has been working to improve.

Since his freshman year at Houston County High School in Warner Robins, Ga., Fromm has been working with former Ole Miss quarterback David Morris, the founder of QB Country.

Morris is working with Fromm on his lower body mechanics in an effort to improve the power with which he throws.

“I think it’s been my feet,” Fromm said. “My feet have not been as clean as they needed to be this past football season. That’s something that we’ve really been hammering throughout this process.

After an injury to Jacob Eason – himself a highly rated member of this year’s draft class – opened the door, Fromm started 14 games as a freshman at Georgia and completed 62.2 percent of his passes for 2,615 yards and 24 touchdowns with just seven interceptions.

That was enough to make him a freshman All-American, and he built on that momentum by completing 67.3 percent of his passes for 2,749 yards with 30 touchdowns and six picks as a sophomore after beating out five-star freshman Justin Fields – now the starter at Ohio State and a highly regarded 2021 draft prospect – to keep the job.

But Fromm’s fortunes changed last season. With the Bulldogs suffering heavy offensive losses at the skill positions, his completion percentage dropped to 60.8.

He still threw for 2,860 yards and 24 touchdowns with just five interceptions, but he was viewed at times as being too risk-averse. The sudden problems with the consistency of his ball placement added to the concerns about his arm strength.

None of which shakes Fromm’s confidence.

He understands what he can and can’t do on the field, and he works to make the team better in any way he can off the field.

During the Combine he was asked to describe his ability to be a positive influence on his teammates.

“That’s a great question,” Fromm said. “It can be whatever it needs to be. Whether if it’s vocal on the field or words of encouragement behind closed doors, the occasional time when I have to call you out.

“The way that I approach life day-in and day-out, I think, it really gives me the ability to hit all of those.”

Projections are widespread on Fromm’s ceiling. Some scouts see an Andy Dalton-like career ahead as a game manager and reliable starter. Others see something more along the lines of Colt McCoy, a well-respected backup with the skill to win as a spot starter who never gets the reins to lead a franchise.

Fit will be important for Fromm. He’ll need a head coach who understands how best to use him, an offensive line that can protect him and skill position players who can make plays for him.

That could make the Indianapolis Colts a possibility, if head coach Frank Reich believes he can refine Fromm’s mechanics to make the most out of his intangible strengths.

“I think the ability to influence others in the offense and the organization, really making everybody better, day-in and day-out, I think it’s a really important characteristic of quarterbacking,” Fromm said, “especially in the professional football league.”