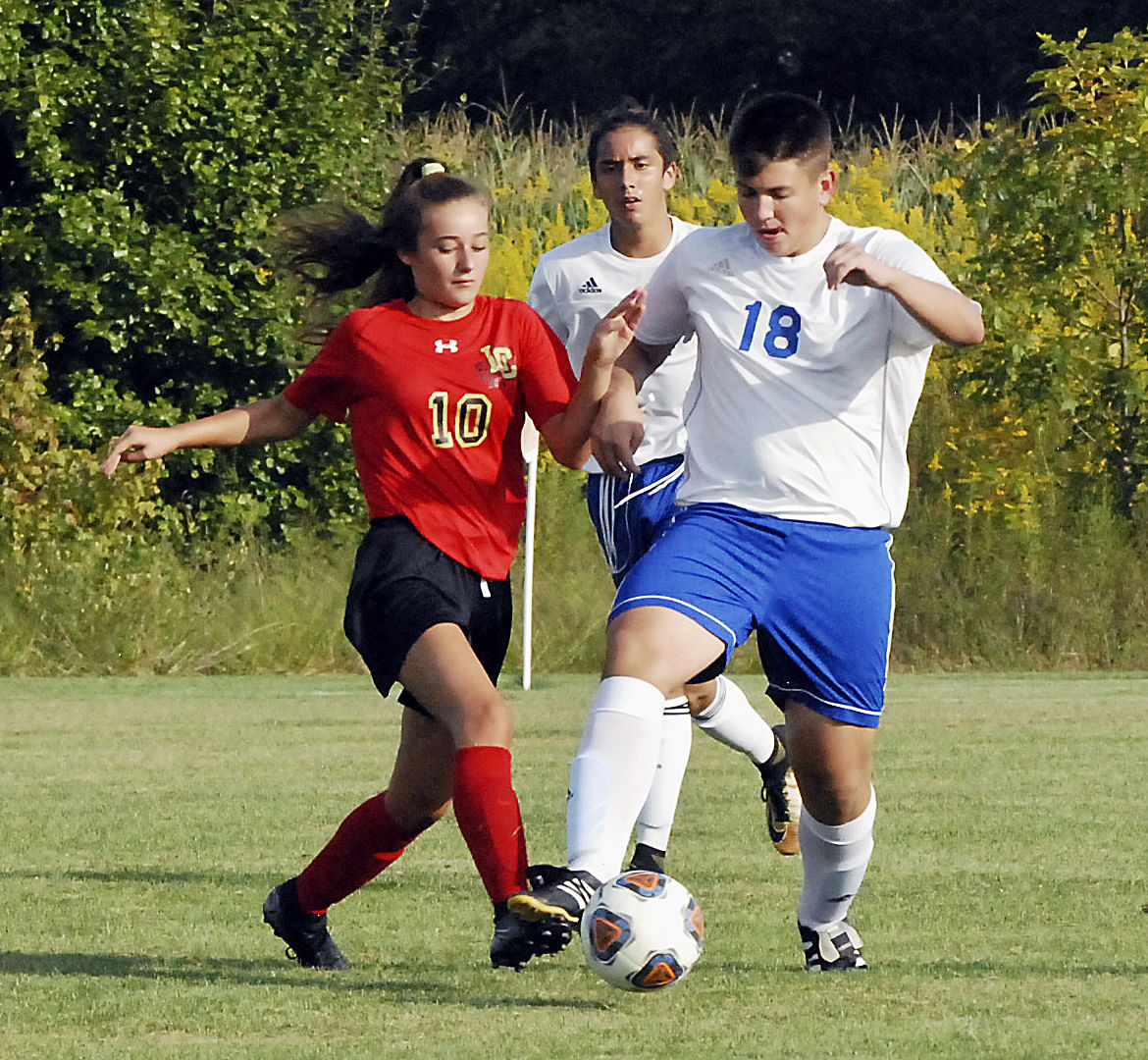 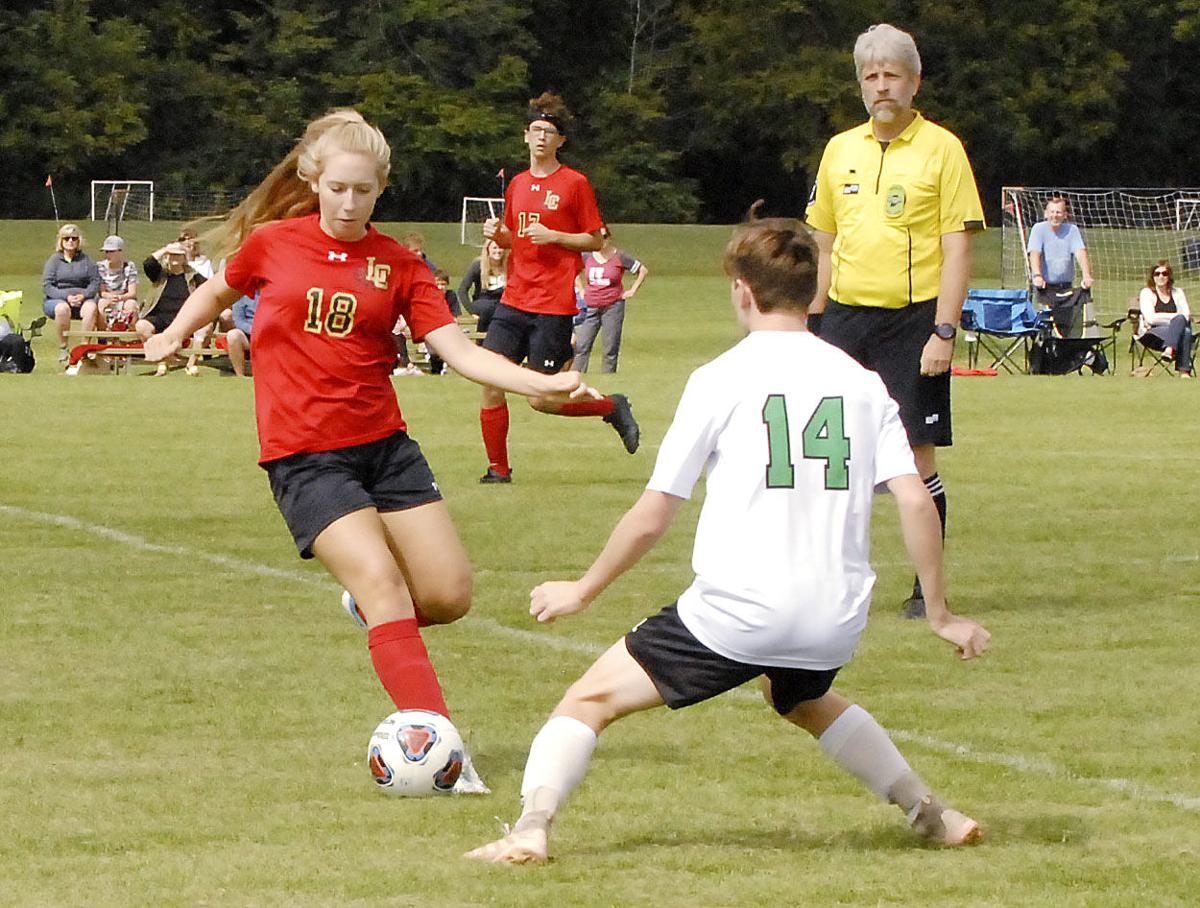 Liberty Christian’s Caroline Erny keeps the ball away from a Yorktown defender in 2019.

Liberty Christian’s Caroline Erny keeps the ball away from a Yorktown defender in 2019.

ANDERSON — While it’s the boys soccer regional that Liberty Christian will compete in on Saturday, the Lions team is coed, has several girls on the roster, and there’s no hesitation at all about putting them to work on the pitch.

They are not a novelty, they are not with the team to pick up a participation ribbon and the biggest mistake would be to take them lightly.

Particularly when facing them on the field.

“Other teams might look at us and think we’re weak because we’re girls,” sophomore Shameel Clervrain said. “But, honestly, they should be terrified of us.”

Clervrain, along with senior Irelynd Evans and junior Caroline Erny are vital parts of the 14-3 sectional champion Lions. Coach D.J. Callahan said the trio has worked hard to earn their playing time, and he’s not shy about inserting all three into the lineup.

“It’s really encouraging to know that I’ve worked to earn the spot I’m in,” Evans said. “Caroline and I are the first two off the bench because of how hard we work.”

Evans and Erny play in the center of the field, with roles as defenders and passers, but both have scored once this season with Evans adding three assists. Clervrain, who Callahan believes has a future as an offensive threat, utilizes her speed on the outside.

“They both do that really well,” Callahan said. “Shameel plays more on the outside just because she’s a natural athlete, and I think that’s where she’ll be next year and the year after that.”

In fact, Clervrain nearly made LC soccer history in the sectional semifinal against Tri-Central. Late in the second half, she took her shot from about 30 yards away and, while the ball eluded the keeper, it bent just enough that it glanced off the far post. It would have been the first girls sectional goal in program history.

“What was going on in my mind was that no one is around me. I have an open shot. Let me shoot it,” Clervrain said. “It was really loving. The crowd was yelling my name. It was just a weird moment.”

Any boy on the opposing team who lets up because he is playing a girl, is making a mistake.

“The first time you let up, any one of those three, they’re going to beat you and take the ball away from you,” Callahan said. “All it takes is a few minutes, and you better forget that they’re a girl.”

Senior playmaker Cole Foreman has no qualms about taking the field with the three Lady Lions and adds they never let up, not in a game or in practice.

“They belong. They work just as hard as the rest of us out here,” Foreman said. “Irelynd has really stepped up this year, and Caroline’s passes are so reliable. They’re big parts of the team for sure.”

For Erny, there isn’t much difference between playing in a high school game where she may be the only female on the field or playing in a family game, where the gender ratio is very similar.

“My brothers both played all their lives, and my dad played in college,” Erny said. “I kind of grew up with that. We would play every week with my cousins, and I have almost all guy cousins. When I came to Liberty, I said I could do this. It doesn’t really scare me.”

There has never been any skepticism from their teammates, all of whom know the girls are there to earn their place on the roster.

“I’ve played with them since middle school, so they all knew that I’m hard working,” Evans said. “I’m working for my spot, and I’m not letting down anything just because they’re guys. They were all real receptive to it.”

Erny said there are still some raised eyebrows when the girls enter the game, but she enjoys quieting those doubts quickly.

“If the other teams don’t remember us, it’s kind of fun just proving them wrong,” she said. “I feel like they underestimate us, then we come in and make things happen.”