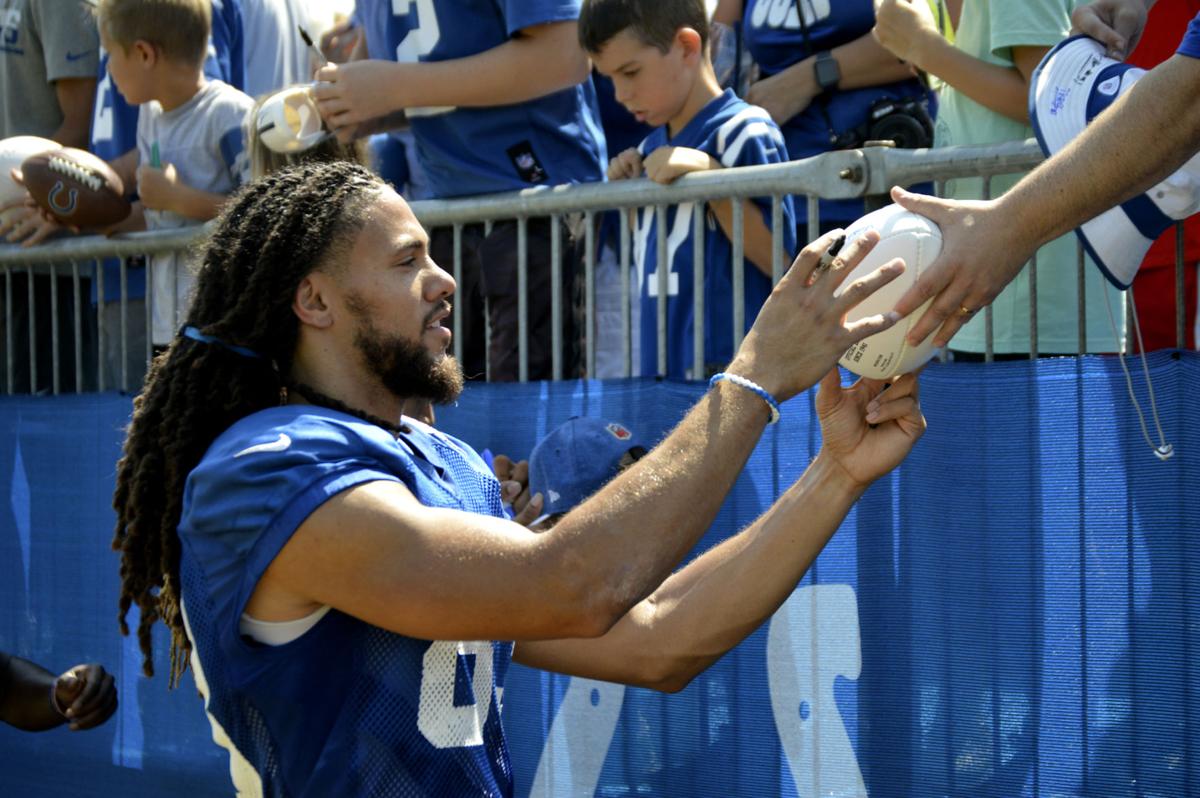 Colts wide receiver Krishawn Hogan takes a football to sign from a fan July 25 after the first training camp practice at Grand Park in Westfield. 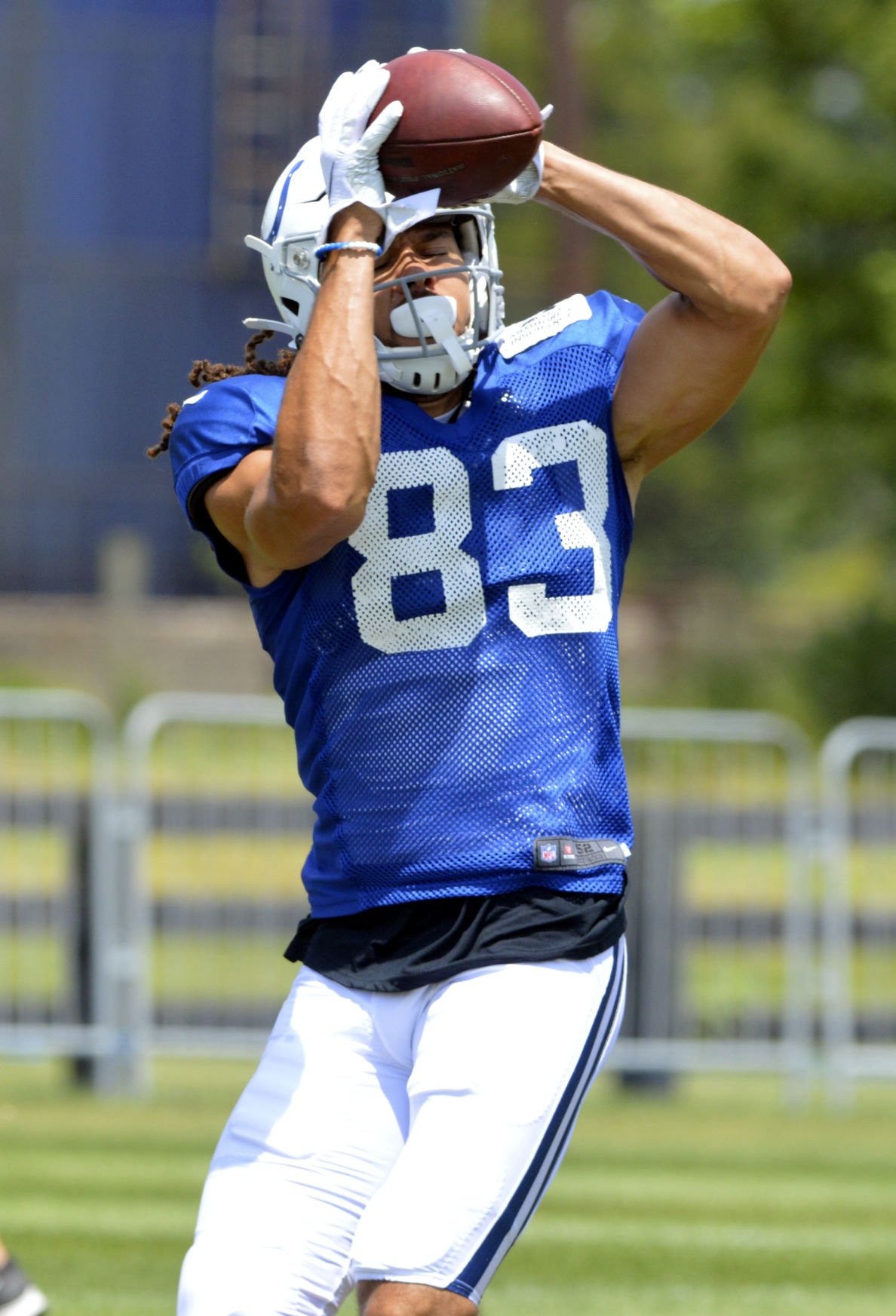 Colts wide receiver Krishawn Hogan takes a football to sign from a fan July 25 after the first training camp practice at Grand Park in Westfield.

The Warren Central grad tore up his knee just weeks after being called up to the active roster in 2017 and spent the ensuing summer trying to convince the Indianapolis Colts he could return to that level.

The knee was no longer a problem. But it seemed as though everything else was.

“I had a little hamstring tweak at one point, then my ankle got rolled up on,” Hogan recalled Wednesday at the Indiana Farm Bureau Football Center. “And I was just like, it was really getting into my head that I couldn’t stay healthy. And I didn’t know what I was doing wrong. And sometimes things just don’t go your way.

“This year, things have (gone my way) on the health side, and I’ve just been taking advantage of that and really just going out there every day trying to put my best out there.”

Hogan is one of several young players who figure to see a lot of playing time in the final two preseason games as the Colts attempt to fill the last remaining roster spots.

The numbers game might not work in his favor.

T.Y. Hilton, Devin Funchess and Parris Campbell appear to be locks to make the 53-man cut at wide receiver. Chester Rogers is invaluable as a punt returner, and his experience in the slot is extra necessary since the rookie Campbell has missed practice since July 28 with a hamstring injury.

That leaves two spots, at the most, remaining.

Deon Cain’s recent surge, including a seven-catch, 80-yard game Saturday against the Cleveland Browns, makes him the clear front runner for one of them.

Zach Pascal, Marcus Johnson and Hogan are the top contenders for the other.

Pascal has a leg up after impressing general manager Chris Ballard while winning a similar position battle last year. The 6-foot-2, 214-pounder caught 27 passes for 268 yards and two touchdowns in 16 games last season and carved out a role for himself on special teams.

Johnson caught six passes for 102 yards and one score last year before injuring his ankle at the New York Jets and finishing the season on injured reserve. His experience with Indianapolis head coach Frank Reich dates back to the Philadelphia Eagles, where the 6-1, 207-pounder appeared in 10 games while Reich was the team’s offensive coordinator during the franchise’s Super Bowl championship season in 2017.

He appeared in two games, forcing and recovering a fumble on special teams, before the knee injury two years ago. And he’s been fighting for a spot on his hometown team ever since.

He’s hoping there will be a moment in this week’s game against the Chicago Bears the decision makers who run the franchise won’t be able to forget.

“I’m trying to make this roster,” Hogan said. “I’ve been getting a good amount of playing time in the first two games, so if I can get even more this next game, I really want to make that big play that makes people realize ‘He’s for real.’

“And, hopefully, on special teams I can do that as well. I haven’t really got a whole lot of special teams reps just because I’ve been at receiver so much. So, hopefully, this week I can go out there and get a tackle or a return or something like that.”

Hogan’s been cut following the preseason twice before – first as an undrafted free agent out Marian University trying to make the Arizona Cardinals in 2017 and then last year by the Colts.

Both times, he landed back on his feet in Indianapolis.

At 6-3 and 222 pounds, he’s the biggest of the contenders for the final receiver spot. And he showed fluid motion throughout the recently completed training camp.

That was one of the things Hogan struggled with a year ago as his body betrayed him and doubts crept into his mind.

He’s been taking notes this year while watching Hilton – a four-time Pro Bowler at 5-10 and 183 pounds – as he attempts to stretch his game.

“We’re much different body types, but if I can get a little bit of that fluid running motion and stopping when I want, then I really know that my game could just go to the next level,” Hogan said.

Among receivers with more than one catch, no one on the roster has a higher average this preseason than Hogan’s 15.3 yards per reception.

His four catches for 61 yards include a crucial third-down grab to keep a scoring drive alive in the red zone early in the third quarter against the Browns.

It was another sign of the dependability the 24-year-old has displayed throughout the offseason.

“Krishawn has done very well, very consistent,” Reich said. “He’s very smart, really good hands, makes all the tough catches and has been productive. So he is doing everything he needs to do to make himself relevant in this competition.”

Hogan’s willing to do whatever’s necessary.

He began learning Reich’s offense while still rehabbing the knee last year. That gave him plenty of time to learn the little details that make the difference in every route.

He believes that intricate knowledge gave him an advantage when he was able to take the field, even while the injuries were piling up.

Hogan had run through the offense so often in his mind, the physical actions came naturally.

Now he’s ready to take that to another level.

“Now, going into Year 2, I can play any position out there,” Hogan said. “I could go to quarterback and run this offense sometimes, I feel like.”