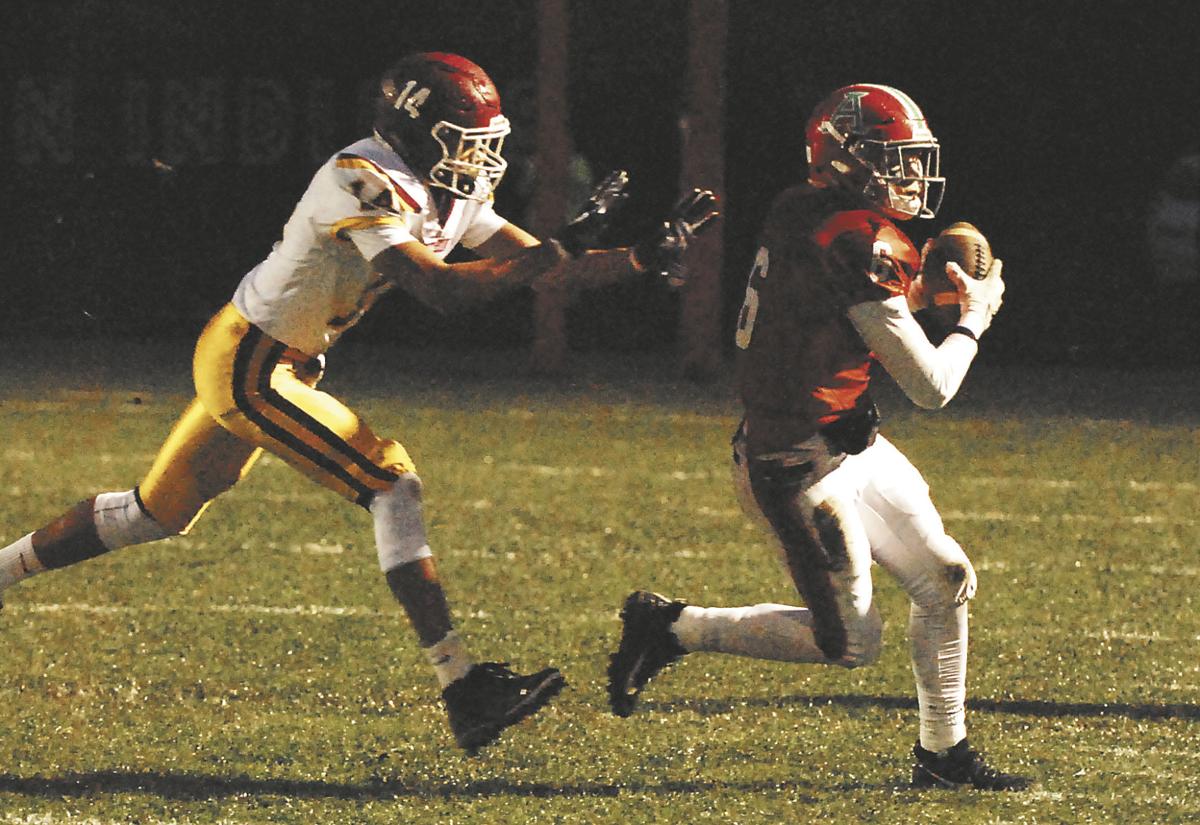 Anderson wide receiver Malachi Qualls gets pushed out of bounds after catching a pass against McCutcheon during his record-breaking junior season. 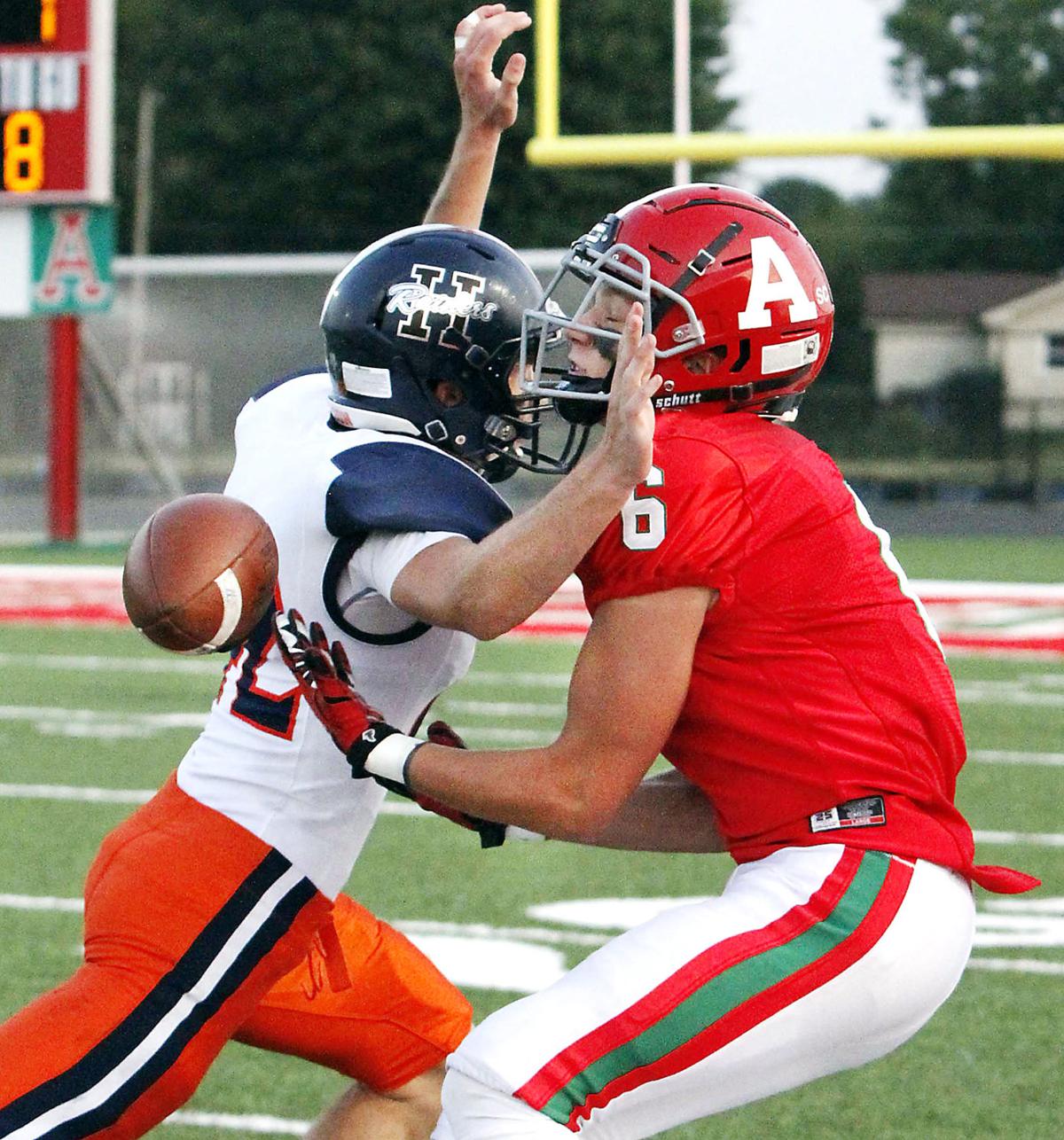 An intended pass to Anderson’s Malachi Qualls is broken up by a Harrison defender last season.

Anderson wide receiver Malachi Qualls gets pushed out of bounds after catching a pass against McCutcheon during his record-breaking junior season.

An intended pass to Anderson’s Malachi Qualls is broken up by a Harrison defender last season.

INDIANAPOLIS — “Necessity is the mother of invention,” is a quote from Plato’s Republic and, while written almost 2,400 years ago, seems to typify the problems faced by area athletes during the last several months while gyms and facilities have been closed due to the coronavirus pandemic.

For Anderson’s Malachi Qualls, a trip to Menard’s and a renewed enthusiasm for long-distance running have filled the bill as the Indians graduate prepares to suit up for the Indiana State Sycamores later this fall.

He said head coach Curt Mallory and his staff were the deciding factor in his decision to head to Terre Haute, where he plans to study business administration.

“It started with the coaches. That’s for sure,” Qualls said. “That’s what stood out to me the most, the staff that they have there. Everyone feels like a family when I’m there and, with all the other recruits they’re bringing in, it’s a really good situation for me.”

Qualls landed at ISU after a record-breaking 2018 junior season for the Indians when he hauled in 119 passes for 1,010 yards during his father’s first year as Anderson head coach. Ron Qualls said he and his wife Vanessa share their son’s comfort with the coaching staff, as well as the university’s administration, especially when it comes to sending their son off to school during a global health crisis that seems to change daily.

Malachi, who is currently listed as No. 88 on the Sycamores’ roster, said his own optimism about the chances for a fall football season is growing.

“We’ll figure out a way to do it,” he said. “Our team will be around each other 24/7. There’s no social distancing from each other. But, at the same time, we’ll be isolated around our team.”

Similarly to the rest of society, figuring out problems has become a way of life for this year’s graduating class. For football players who could not hit the weight rooms or work out with their athletic trainers, new methods of preparing had to be found. For Qualls, that meant running and lots of it.

“I had a difficult time at first getting acclimated to everything, but I found different ways to do body weight exercises, and I really started running a lot more,” he said. “I run every single day, almost nonstop. It’s really helped me a lot with stability, so that’s one thing I’ve picked up through all this is a love of running. So that’s a positive.”

His father pointed to a recent instance when Qualls ran several miles during a rainstorm.

But, it was an impromptu trip to the home improvement store that Qualls used to get more training done. All he needed was some chains and the family SUV.

“When this thing hit, he said ‘Dad, let’s go to Menard’s’,” Coach Qualls said. “And he’s not really a run-to-Menard’s kid. He wants to buy some chains.”

Qualls’ idea was to tie the chains to the family’s SUV and use that to help with exercising. He hooked the chains to a vest, pulled the SUV up and down the street and found a way to work on his upper body strength by configuring the chains in a different way.

The third-year Anderson coach said this was well within Qualls’ character.

“One coach described Malachi as a ‘figure-it-out guy’,” Coach Qualls said. “There are different kinds of guys in the world, and Malachi is a figure-it-out guy. No matter what the situation is going to be, when things are stacked against you, what are you going to do? Well, Malachi will figure it out.”

Qualls has also figured out, as he heads into an uncertain fall, he will need to focus on controlling what he can control and keep that faith he has in his coaching staff and teammates.

“I’m just thinking about the guys I’m going to be around. I trust them a lot, and we’ve been talking about social distancing as a team, and that we really have to stay away from large groups of people,” Qualls said. “I’m not too worried about it because when we get to campus, we’ll be going through daily screenings and temperature checks.”

And as both a parent and a coach, Ron Qualls wants nothing but success for his son at Indiana State.

“I just want Malachi to continue to be the best version of Malachi,” he said.