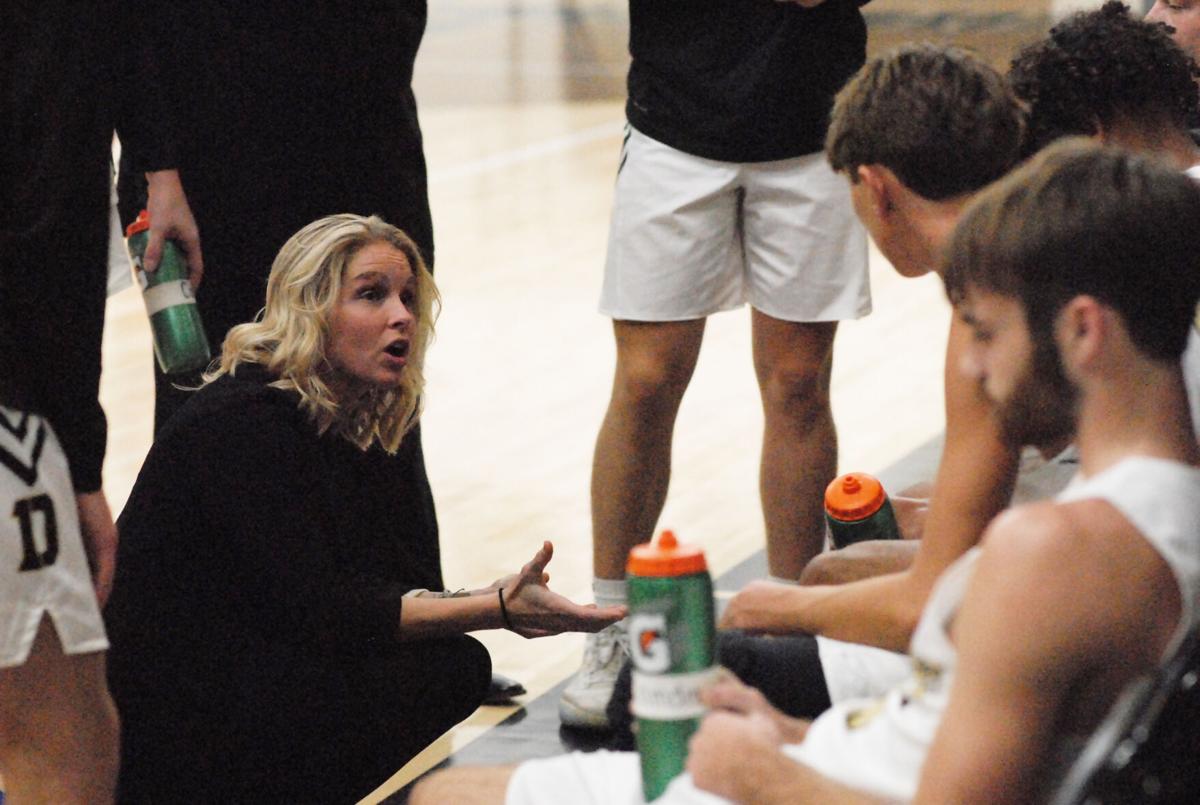 Daleville coach Ashley Fouch, above, talks to players after the end of the first quarter Wednesday. The Broncos defeated Shenandoah 60-57 in Fouch’s boys basketball debut. Below: Daleville’s Trevion Johnson gets fouled by Shenandoah’s J. Demick while driving through the lane Wednesday. 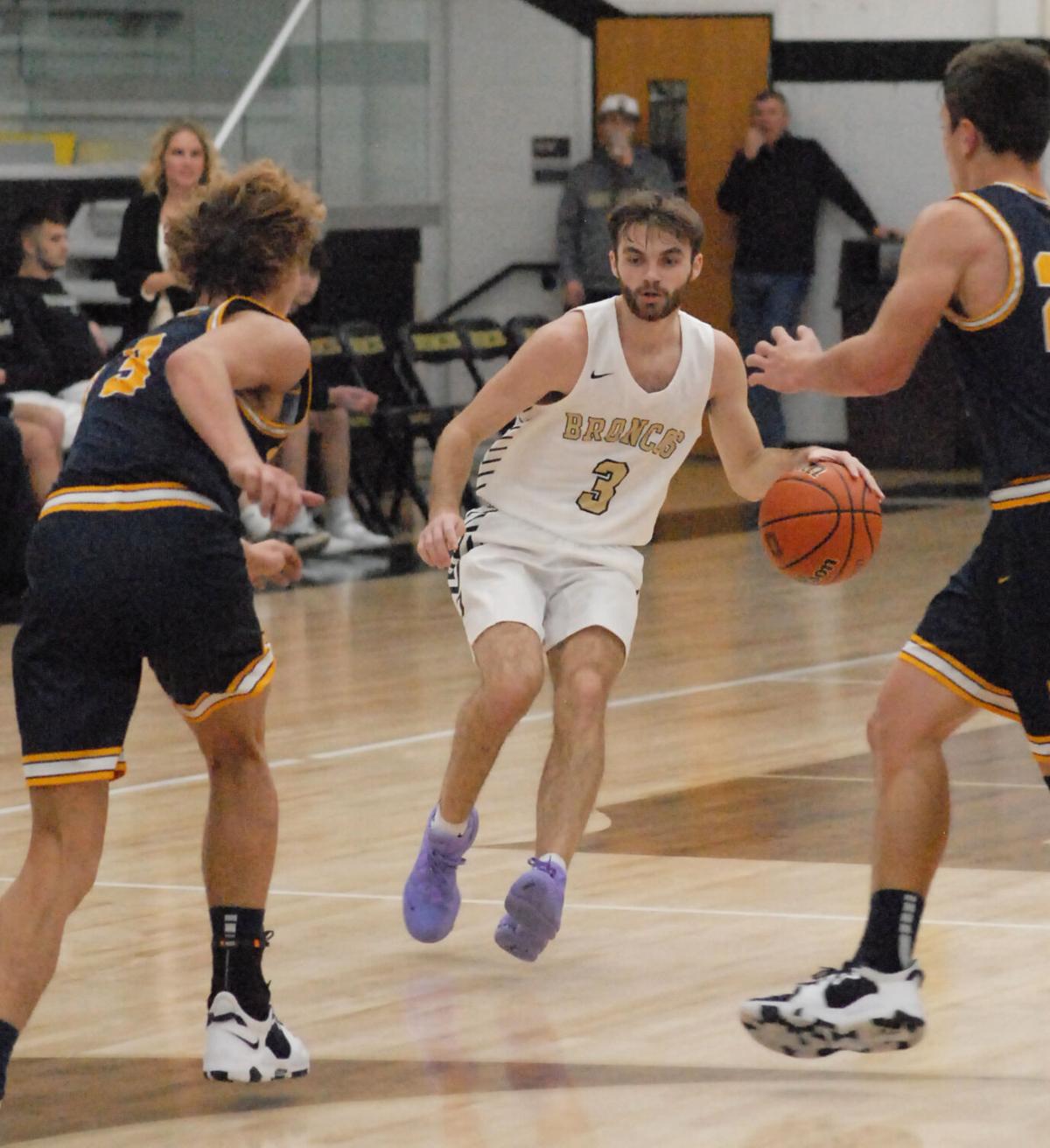 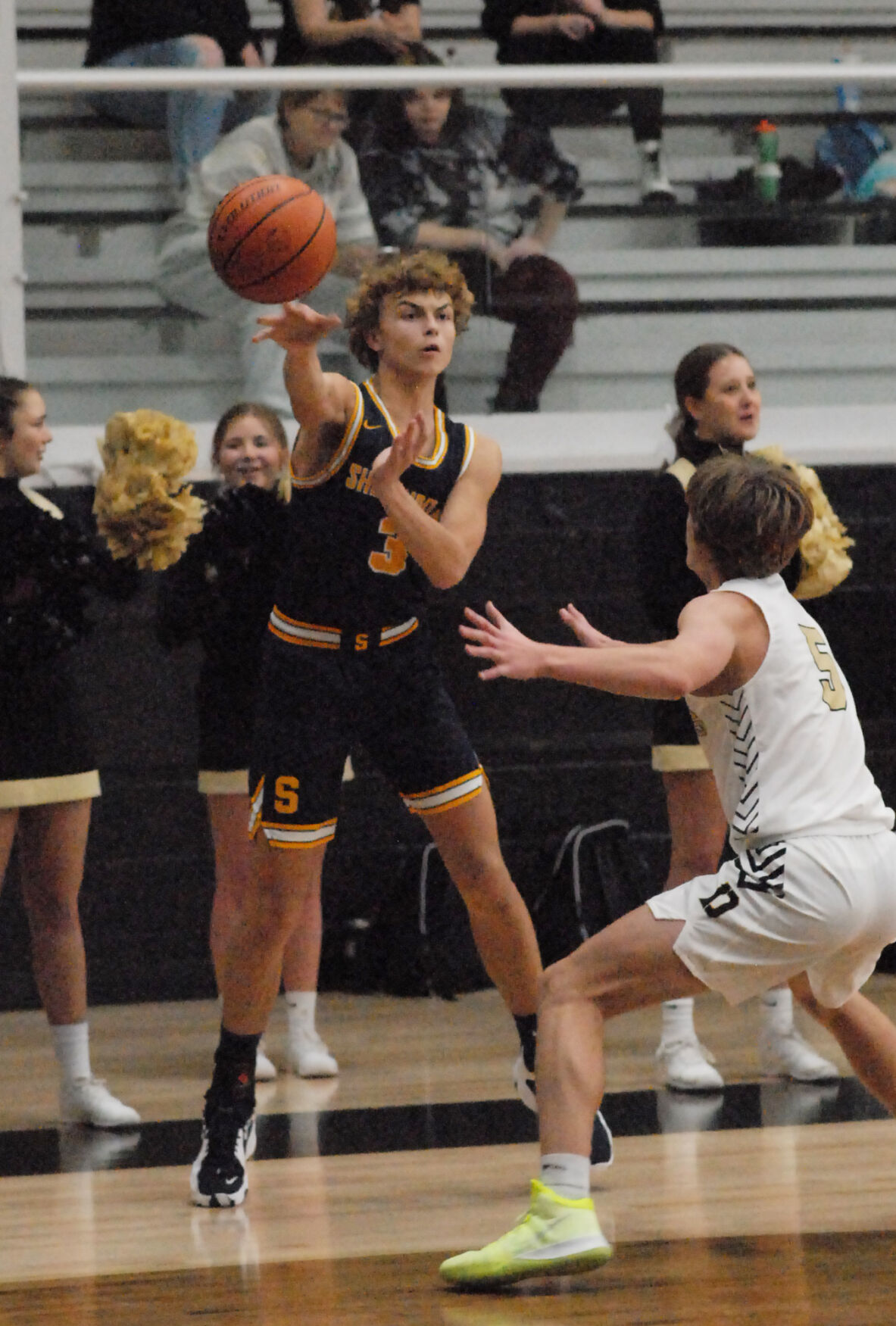 Shenandoah's Jack Stevens passes the ball to an open teammate beneath the basket Wednesday. 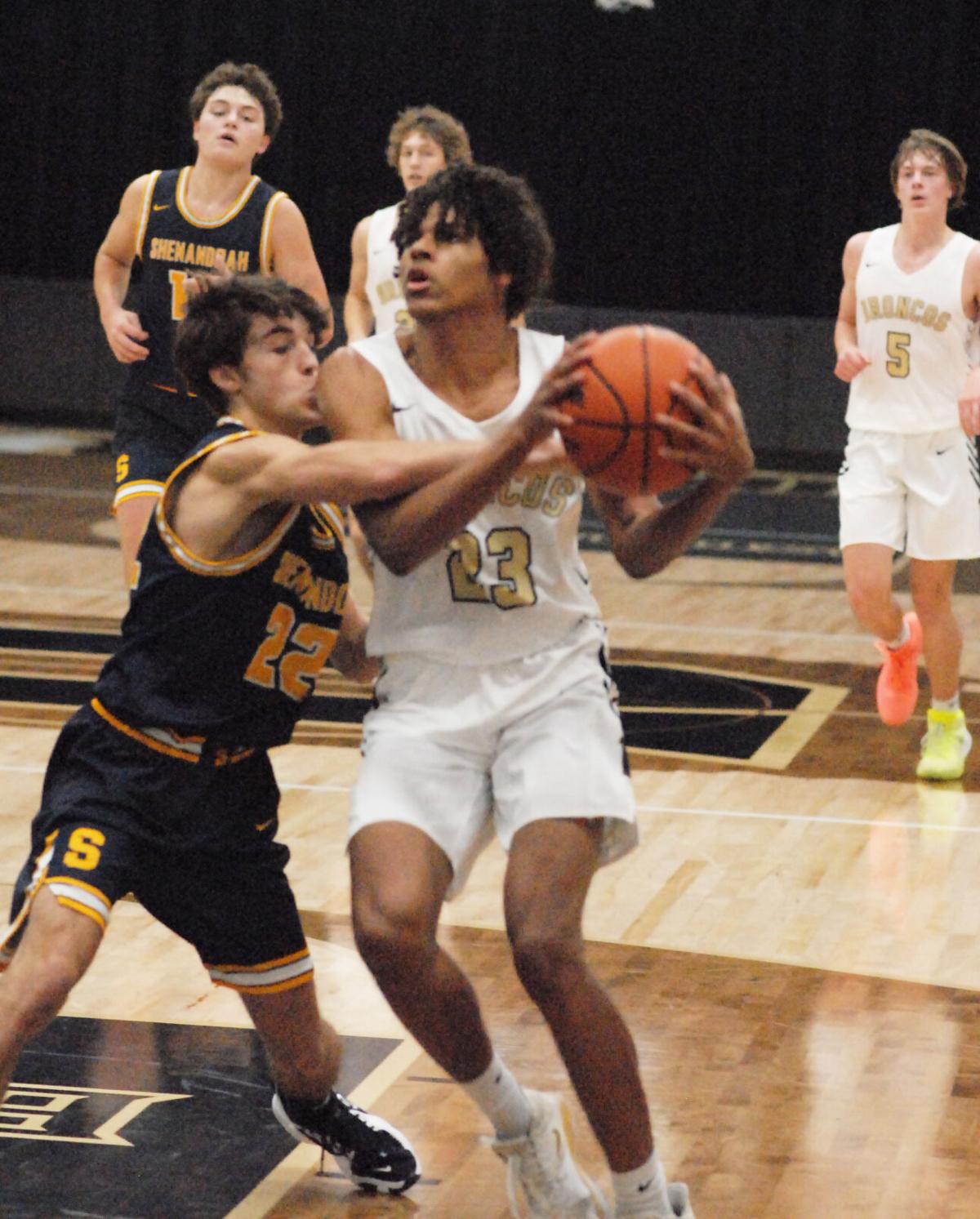 Daleville’s Trevion Johnson gets fouled by Shenandoah’s J. Demick while driving through the foul lane Wednesday. 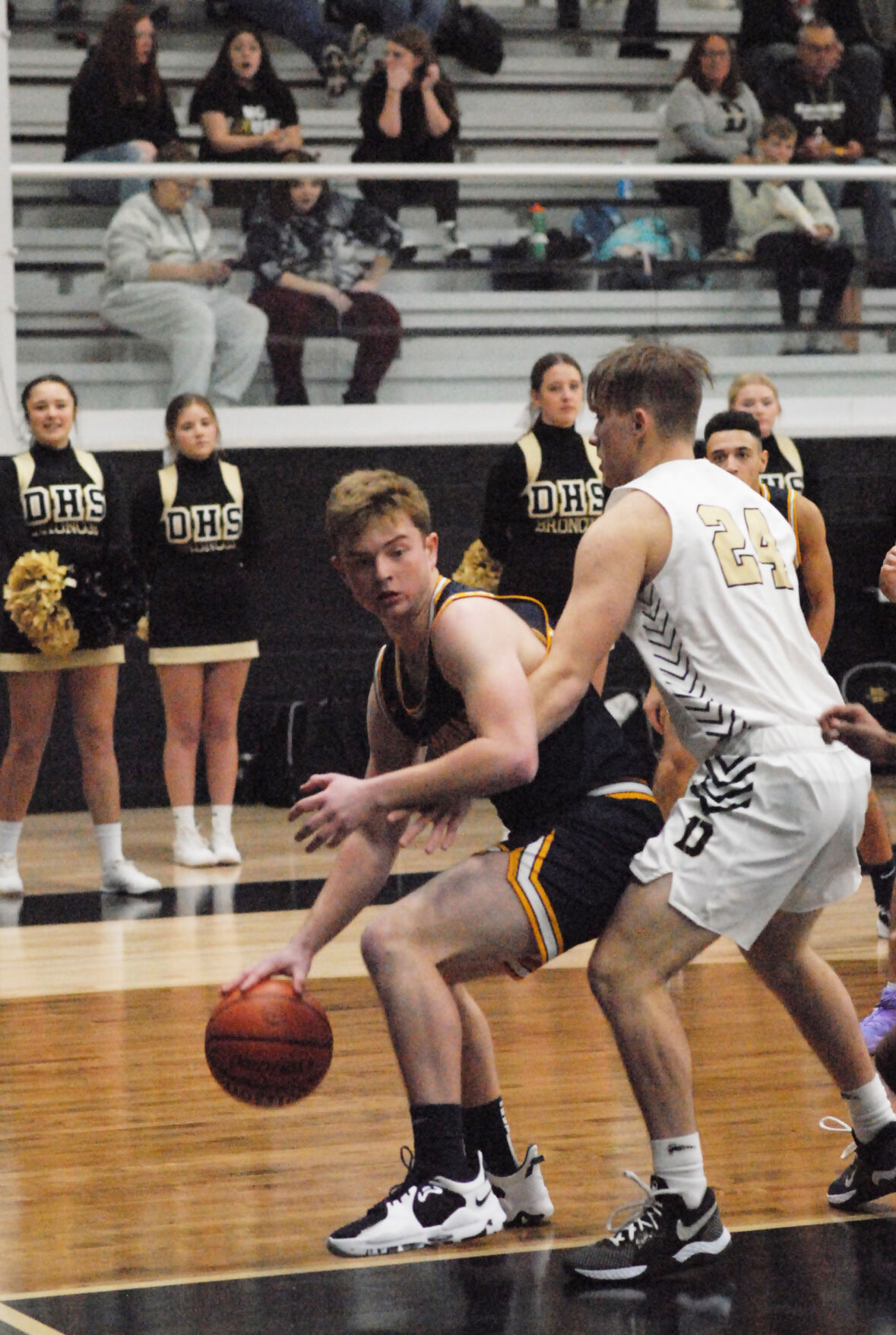 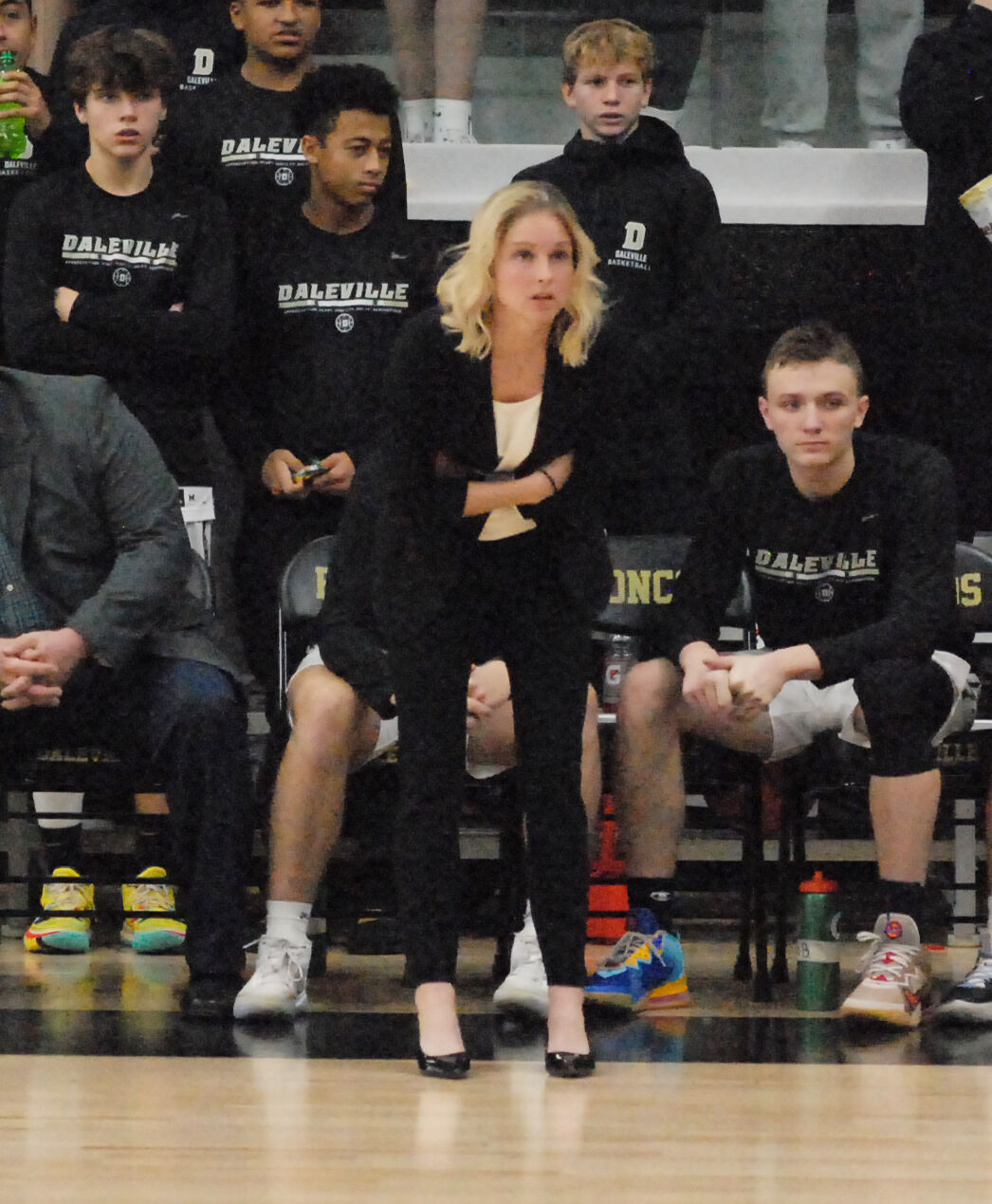 Daleville coach Ashley Fouch, above, talks to players after the end of the first quarter Wednesday. The Broncos defeated Shenandoah 60-57 in Fouch’s boys basketball debut. Below: Daleville’s Trevion Johnson gets fouled by Shenandoah’s J. Demick while driving through the lane Wednesday.

Shenandoah's Jack Stevens passes the ball to an open teammate beneath the basket Wednesday.

Daleville’s Trevion Johnson gets fouled by Shenandoah’s J. Demick while driving through the foul lane Wednesday.

DALEVILLE — Recent history was on Shenandoah’s side in its boys basketball season opener against Daleville.

But history was made from the other bench on this night in dramatic fashion.

Sophomore Meryck Adams buried a 3-point basket for Daleville, the 13th and final lead change of the second half, and the Broncos held off the Raiders 60-57, giving Ashley Fouch her first win as the boys basketball coach at Daleville.

Fouch is the first woman to coach boys varsity basketball in Delaware County or in the THB Sports area, and her first win snapped an eight-game losing streak to Shenandoah — which had beaten the Broncos 21 of the last 23 meetings overall. Fouch was quick to praise her team, which clung to a lead it failed to build on when it missed several free throws late in the game.

“Honestly, I just have to give it up to the boys,” she said. “They stayed extremely poised, extremely competitive and kept their heads on their shoulders.”

The win also came against one of the giants of Indiana basketball in Shenandoah coach and winner of 601 games in his career, Dave McCollough.

“He’s an incredible coach and his groups, even when they’re down, they’re still really solid,” Fouch said.

The teams were rarely separated by more than a basket or two.

Shenandoah’s biggest lead came at 20-11 on a rebound basket by senior Jasper Campbell, who led the Raiders with 22 points and 11 rebounds. He also gave Shenandoah a 29-28 lead at halftime on a drive after a 10-0 run gave the Broncos a 25-22 lead.

Daleville scored the first five points of the second half on a 3-point basket by senior Trevion Johnson and a layup by senior Camden Leisure for a 33-29 lead. That was the first of 10 lead changes in the third quarter alone. The Raiders took a 50-49 lead into the final quarter on another Campbell basket, a lead that grew to 52-49 when he scored again to open the fourth.

The Raiders had a chance to add to the lead with a fast-break opportunity after a Stevens rebound.

Stevens sprinted through the open court for a layup, but Leisure knocked the ball loose and saved it from going out of bounds into the hands of Adams for the steal.

The Broncos converted the defensive play into a five-point swing as Johnson scored on a reverse layup, was fouled and converted the three-point play to tie the game at 52-52.

“I felt like that was a game changer,” Leisure said. “We were down at that point, getting the defensive stop and then the and-one at the other end, it changed the game.”

Two Adams’ free throws later, Daleville had the lead, but Campbell scored a three-point play of his own to put Shenandoah back on top. Two possessions later, Adams took a pass from Leisure and sank the go-ahead trey to put the Broncos on top for good.

“Camden made some incredible decisions,” Fouch said. “It just comes down to being gritty. That’s the theme, and that’s always been my theme as a coach.”

The Broncos were 4-for-8 at the free throw line in the fourth quarter — including two misses on front ends of bonus situations — but were able to offset those struggles by committing just one turnover in the final eight minutes. Off that one turnover, a held ball was forced by Dylan Scott to return possession to the Broncos.

“It came down to poise, and they had it,” Fouch said. “Of course, we’re going to talk about the free throws at practice Friday, but honestly that comes down to pressure moments. We can grow in that, and I’m OK with it. I’m glad the turnovers were down because that offset the free throws.”

Stevens came up just short of matching Campbell’s double-double for the Raiders with 13 points and nine rebounds to go with five assists.

Shenandoah will play Saturday in its home opener against Henry County rival Blue River Valley while the Broncos will host Monroe Central on Dec. 3 in another Mid-Eastern Conference matchup.