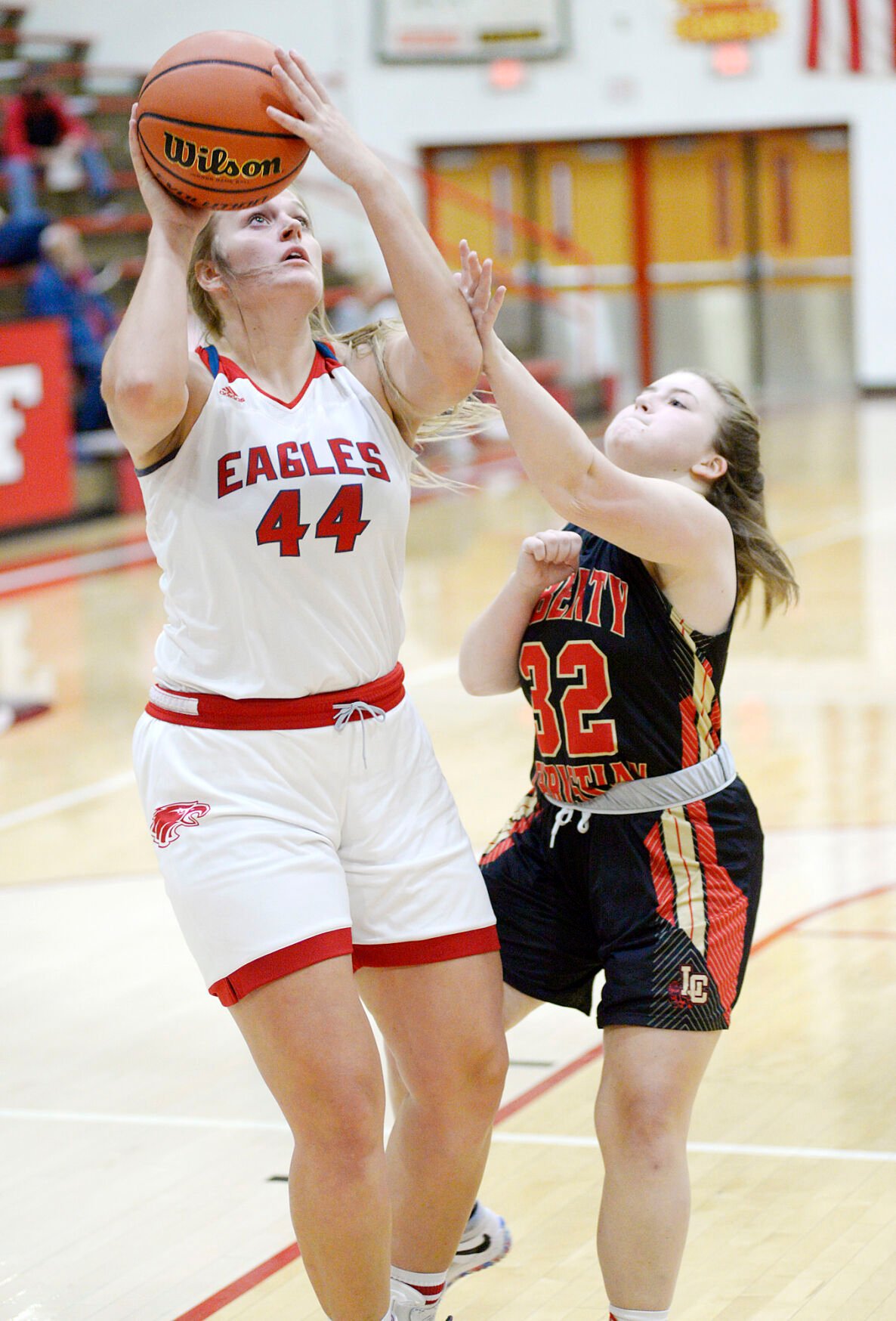 Frankton’s Chloee Thomas lays up a basket and draws a foul from Liberty Christian’s Cydnie Layton as the Eagles hosted the Lions on Thursday. 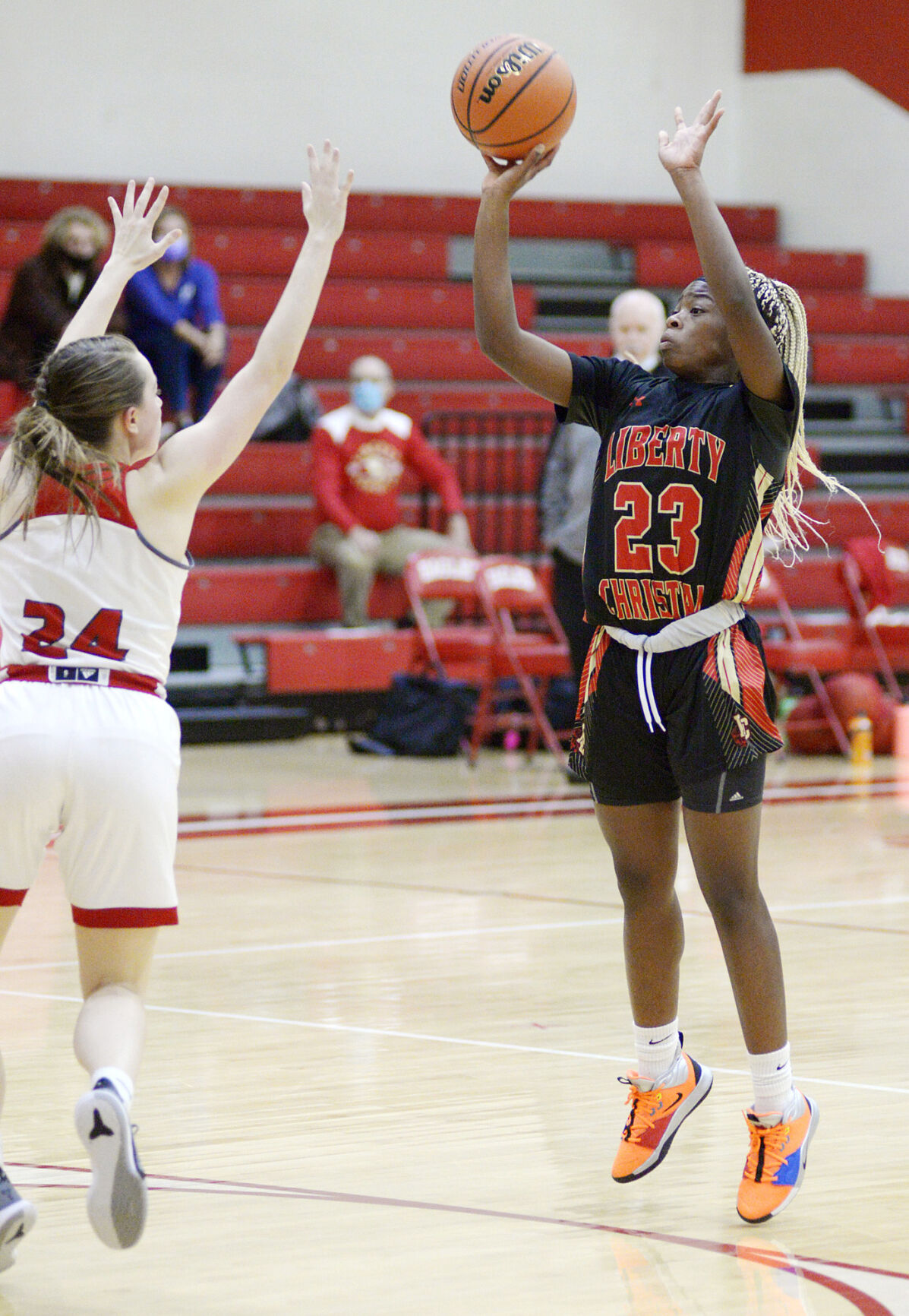 Frankton’s Chloee Thomas lays up a basket and draws a foul from Liberty Christian’s Cydnie Layton as the Eagles hosted the Lions on Thursday.

FRANKTON — The story of the game could be told by the final score as Frankton rolled past Liberty Christian 81-12 at the Eagles Nest on Thursday evening.

But as the COVID-19 walls continue to close in on high school sports with rising case counts, both teams are on equal footing in terms of wanting one thing.

“These kids only get to go around once,” LC coach Mike Carey said. “We’ll keep trying to do the right thing, and hopefully we’ll keep going.”

The Eagles, who moved up to No. 4 in Class 2A this week, improved to 3-0 behind an unselfish offense that yielded four players in double figures and 35 made field goals with 19 total assists. That number was even more impressive in the first half, when Frankton assisted on its first 11 field goals and 13 of 17 made shots before halftime.

“Anytime you have players who can give up good shots to get better shots — great shots is the way we always say it — if we can get to that mentality, then we know that everyone is playing for one purpose and one purpose only,” Frankton coach Stephan Hamaker said. “We whole heartedly feel that team basketball is the way to look forward to the future, and we want our best basketball to be played at the end of the year.”

One of the best examples was 6-foot-1 post player Chloee Thomas who, at halftime, led the team with four assists but had no rebounds. She finished the night with 12 points, five rebounds and a team-best five assists, and guard Lauryn Bates was the chief beneficiary.

The Frankton post players found Bates cutting to the basket on her way to 20 points and seven rebounds to lead all players.

“It’s a little bit funny because we never have Chloee and L.B. on the same teams when we have our teams split even,” Hamaker said. “They play well off each other, and they’re a good 1-2 punch for sure.”

Joining Bates with backcourt double-figure scoring efforts were Cagney Utterback with 16 and Ava Gardner with 13 points. Utterback also grabbed four rebounds and handed out four assists while matching Bates for the team lead with five steals and had to do it while guarding LC’s speedy guard Shameel Clervrain.

“She had a tough assignment with somebody who is really fast to start the game,” Hamaker said. “(Clervrain) may be top five speed-wise on our schedule the entire year.”

Carey knows Frankton is one of the better teams his kids will play this season and liked much of what he saw from the players in their season opener.

“I liked that we went through some series where we took care of the ball and didn’t turn it over,” he said. “I like the fact that they weren’t afraid to shoot, a little bit rushed, but pressure will do that to you.”

Next up for Frankton is a visit to the historic Fieldhouse to play the Muncie Central Bearcats while Liberty Christian will host Elwood next Friday in the first game for the Panthers after the passing of coach Craig Brunnemer on Monday evening.