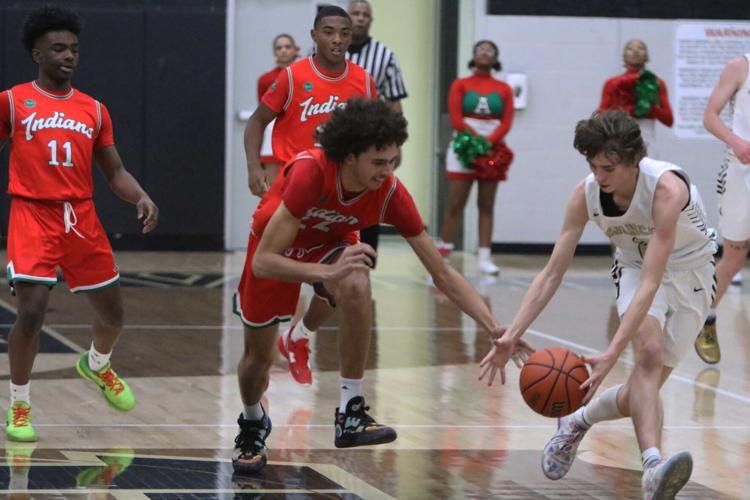 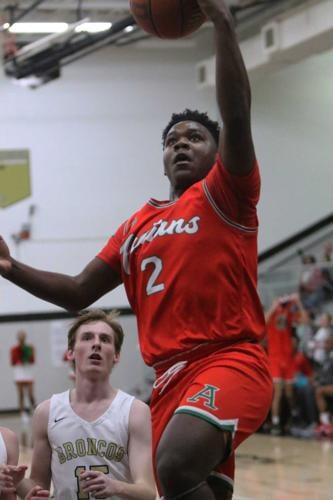 Anderson’s Ahmere Carson makes a fast break down the court and scores on a layup. 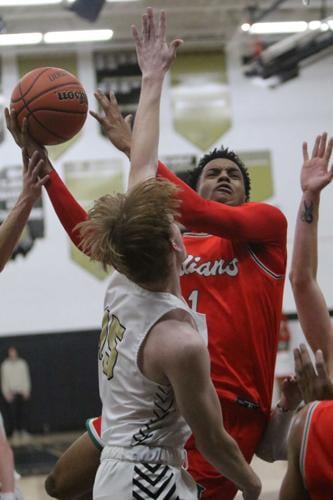 Anderson's Alex Troutman is fouled by Daleville's Logan Leech as he drives to the basket. 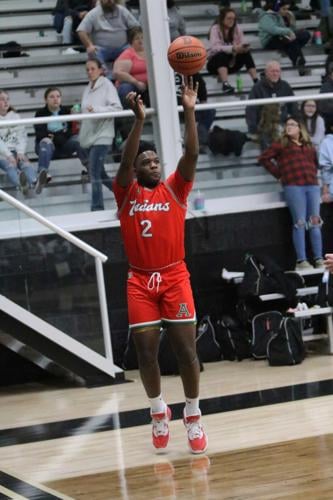 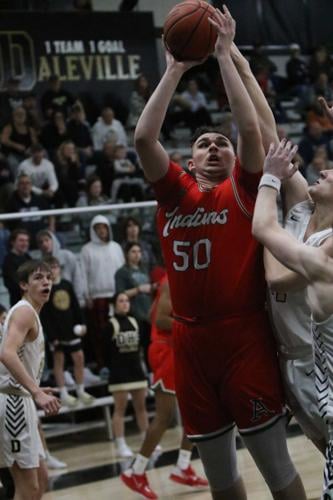 Anderson's Jaylen Murphy fights off a Daleville defender as he goes up for a shot. 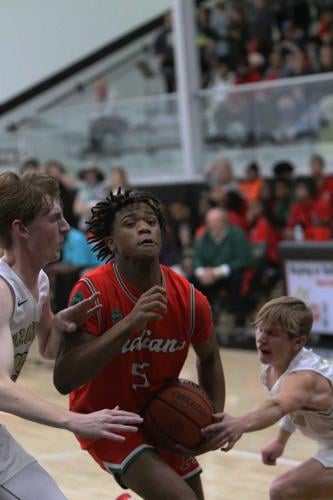 Anderson's Damien King drives to the basket through a couple of Daleville defenders. 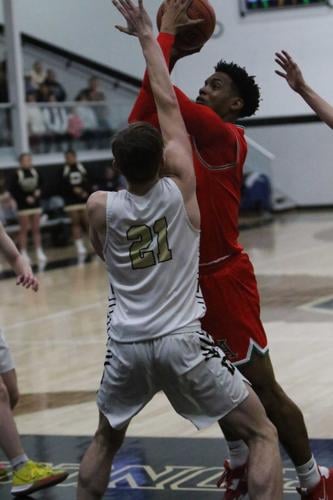 Anderson's Alex Troutman drives to the basket as Daleville's Carson Buck tries to stop the drive. 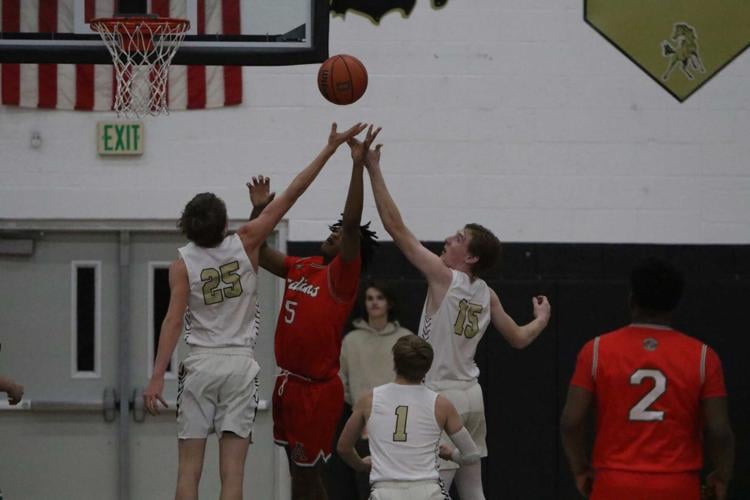 Anderson’s Ahmere Carson makes a fast break down the court and scores on a layup.

Anderson's Alex Troutman is fouled by Daleville's Logan Leech as he drives to the basket.

Anderson's Jaylen Murphy fights off a Daleville defender as he goes up for a shot.

Anderson's Damien King drives to the basket through a couple of Daleville defenders.

Anderson's Alex Troutman drives to the basket as Daleville's Carson Buck tries to stop the drive.

ANDERSON — There are few basketball similarities between Class 4A Anderson and 1A Daleville. From size of school to style of play, the Indians and Broncos are as different as different as can be, which made many scratch their heads when the schools agreed to play Tuesday at Daleville.

What the programs do have in common surrounds the coaches — Daleville’s Ashley Fouch and Anderson’s Donnie Bowling — who are trailblazers in the area basketball community and have forged a friendship and mutual respect in recent years.

The two also wanted to use the unusual meeting between the Broncos and Indians as an opportunity to improve specific areas of their teams as they head into the final month of the season.

Despite being overwhelming underdogs in the first meeting between the programs since November 1996, the Broncos hung tough — largely due to 34 points from sophomore Meryck Adams — before falling to Anderson 86-73 on Paul Garrison Court.

It was the seventh win in a row for Anderson (12-3) while Daleville (4-9) has lost seven of their last eight games. But Bowling warns anyone judging the Broncos based on their winning percentage is making a mistake as five of the team’s nine losses have been by single digits including two games decided by a single possession.

“I think it shows that Daleville is a lot better team than their record,” Bowling said.

The matchup appeared early to be as one-sided as many had predicted. Ja’Quan Ingram scored seven of his 19 points in the first quarter as the Indians bolted to an early double-digit lead at 18-4. Freshman Collin Lewis made it a 15-point lead at 24-9 with a drive to the basket as Anderson seemed to pull away.

But a preview of Adams’ evening sparked one of several surges by the Broncos. The 6-foot-2 junior drilled a 3-point shot to start a 10-2 run to end the first quarter. When Dylan Scott’s 38-footer at the buzzer was good, Daleville pulled within 26-19 after one and inched even closer when Adams drilled a 19-foot jumper to open the second quarter.

There was no backing down from the home team.

“I’m very happy with the way they played,” Fouch said. “Honestly, my mindset going into it was that it was either going to be really bad and they would expose every weakness that we have or we’re going to step up to the challenge, get tougher and be way more gritty than we have all season long. … We’re not taking steps backwards anymore. We proved that we can play with the best in Indiana.”

Baskets by Damien King and Ingram paused the Adams onslaught, but after Logan Leech hit a pair of Broncos free throws, Adams again hit paydirt from beyond the arc to pull the Broncos within 30-26 during a fast-paced first half.

But Anderson scored the next 15 points, the last four on Ahmere Carson baskets for a 45-26 lead before Adams drilled another trey just before the second quarter ended, sending him to the break with 17 points and his team down by 16.

Anderson controlled tempo in the third quarter and outscored the Broncos 23-16 and midway through the fourth quarter seemed poised to run away and hide after a Daris Miles rebound basket pushed the Indians’ lead to 27 points at 80-53.

But quick as a flash, Adams brought the Broncos back. He followed the Miles score with three consecutive 3-point baskets to cut into the lead, and a Carson Buck 3-point play trimmed the lead under 20 at 84-65.

The Broncos finished the game on a 20-6 run as Leech scored on a rebound basket and on a drive in the lane before Adams closed out his night with a wing jumper and a pair of free throws.

Adams was 8-for-18 from 3-point range and 4-for-4 at the free throw line, many of his made shots barely moving the net.

“Meryck Adams, when he plays confidently, you can’t stop him,” Fouch said. “He’s special. When he keeps his head, he’s even more special.”

“Can we defend the outside shot? I think we didn’t do it well,” Bowling said. “We’ve got to get better at defending. … We’ve got to close out better, but I honestly think they’re a good team.”

Carson led the Indians with 20 points while Ingram just missed out on a triple-double with 19 points, eight rebounds and nine assists. King added 14 points and Alex Troutman scored 11 for the Indians.

Dylan Scott — who hit a pair of threes himself — scored 11 points for Daleville while Leech finished with 10 points and eight rebounds and Noah Colvin had five assists.

After the final buzzer, both coaches felt they learned something about their own teams and could not help but brag about their opposition.

“When there’s a very noticeable mutual respect between both coaches — Coach Bowling is my guy, and we’ve been good coaching friends since I’ve gotten this job,” said Fouch, who is also the girls basketball coach and was recently named Daleville’s athletic director. “He’s been a huge supporter of me.”

“She did a good job of attacking our 1-3-1 (defense). We’ve just got to get better,” Bowling said. “I like Ashley as a friend. So for us I hope it makes us better, and for them I hope it gives them some confidence.”

Anderson resumes defense of its North Central Conference championship Friday when McCutcheon visits the Tipi and will host Lawrence Central on Saturday. The Broncos travel to Union (Modoc) on Friday evening.

Anderson dominated the junior varsity contest, defeating Daleville 79-42. Zamarien Bryant led all players with 20 points for the Indians while Adrian Smith and Mekhi Snyder had 11 points each to pace the Broncos.

To play the media you will need to either update your browser to a recent version or update your Flash plugin.