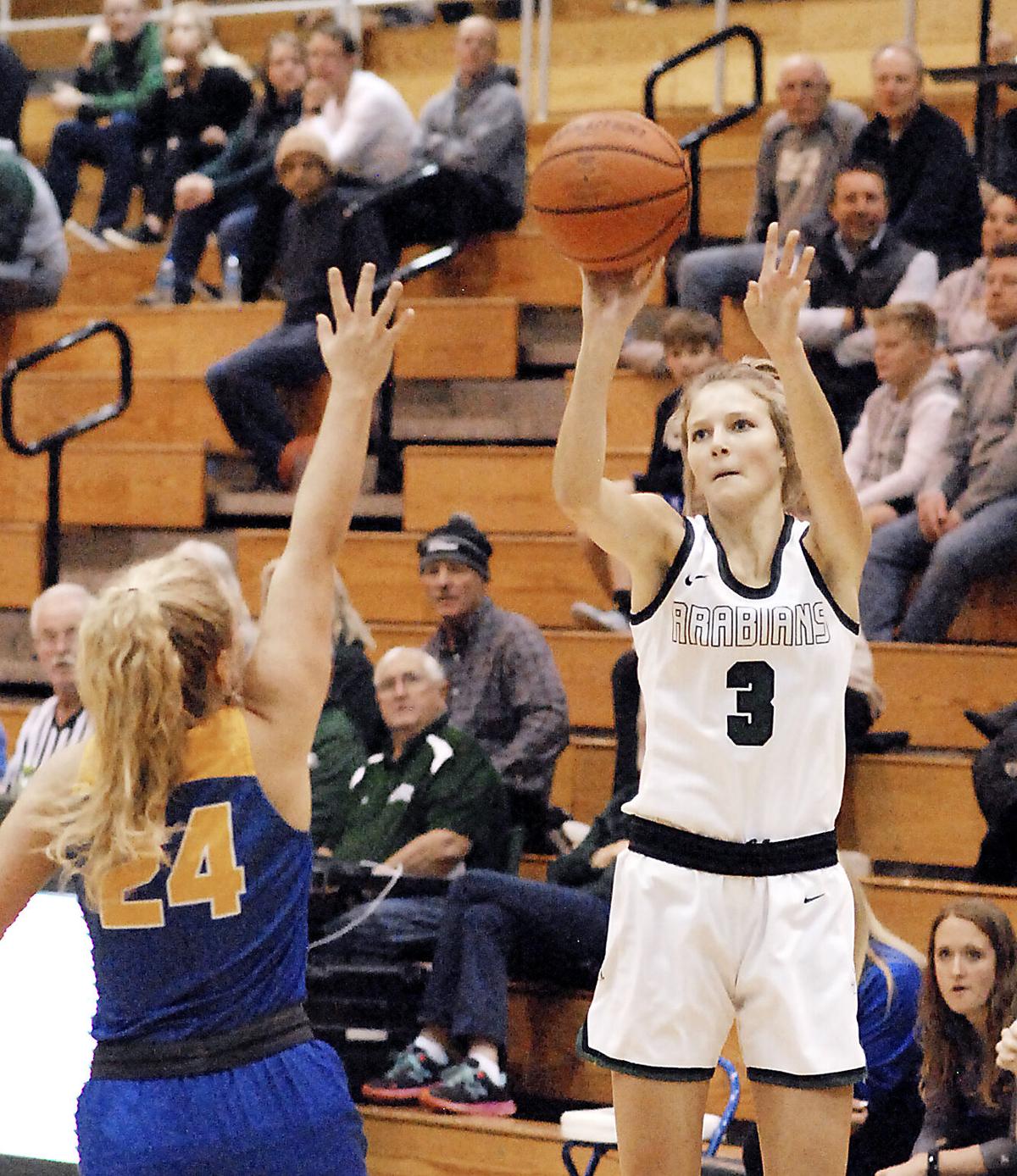 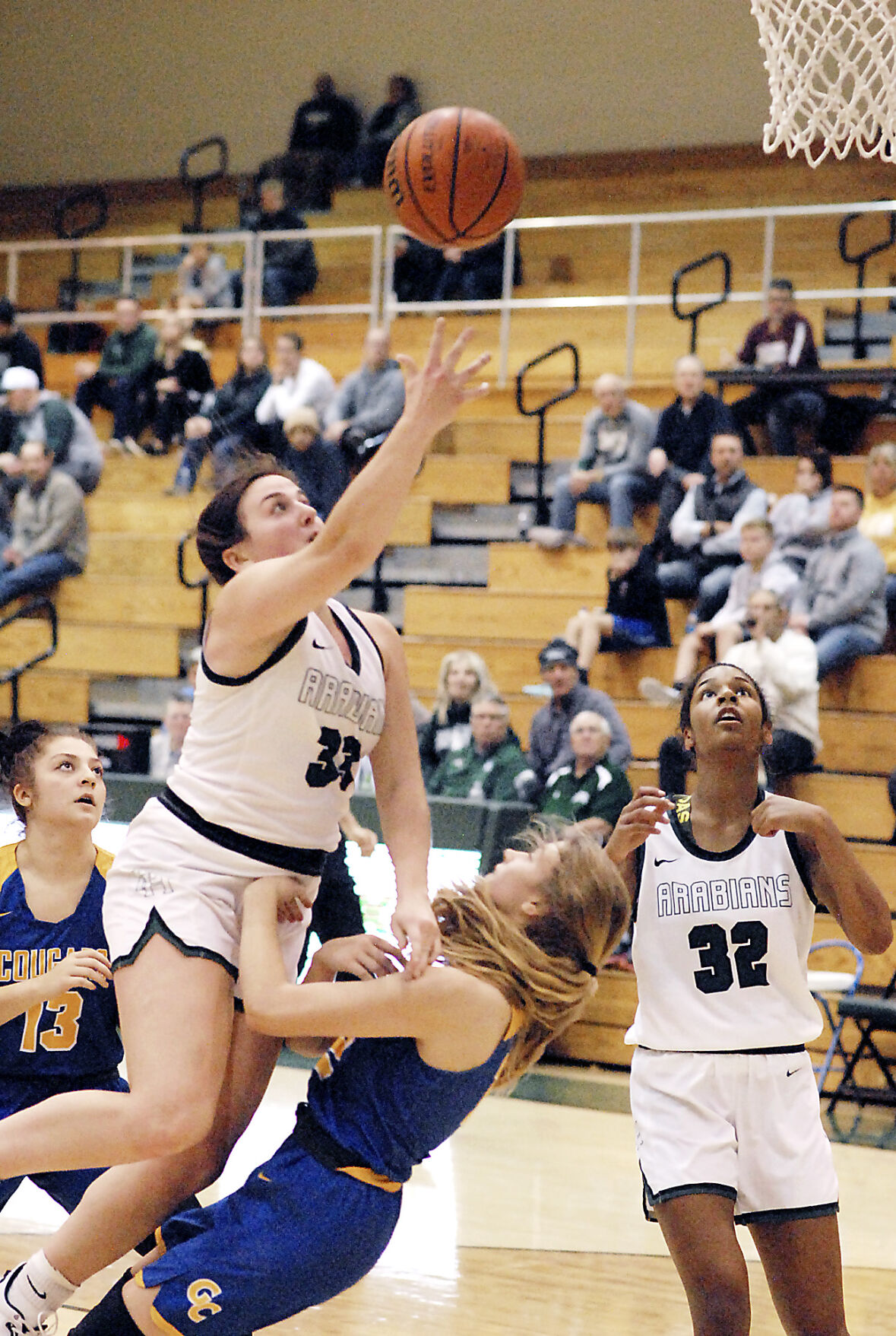 Pendleton Heights’ Whitney Warfel gets called for a charging foul while going in for a shot Friday against Greenfield-Central. 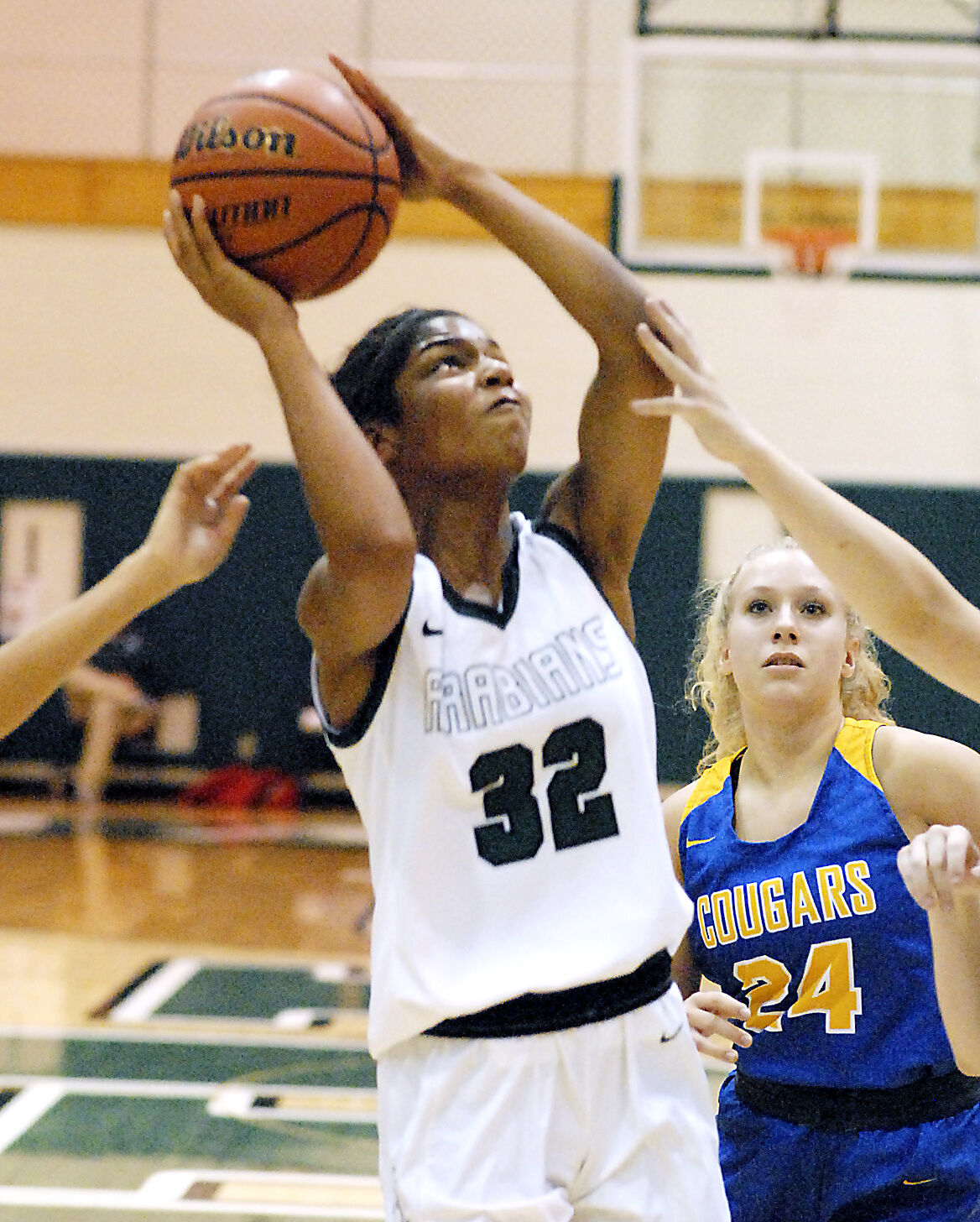 Pendleton Heights’ Whitney Warfel gets called for a charging foul while going in for a shot Friday against Greenfield-Central.

PENDLETON – Hailee Brunnemer missed her first shot of the night.

After that she was almost automatic.

Brunnemer, the 6-foot senior for Pendleton Heights, scored a game-high 28 points on 11-of-15 shooting, carrying the Arabians to a 72-34 victory over Greenfield-Central in Hoosier Heritage Conference play.

“Tonight I was just really feeling it, and I just felt good,” she said.

“She’s that kind of shooter,” Arabians coach Chad Cook said. “You could almost see her making them before she shot them with the confidence she had tonight.”

Brunnemer and junior Whitney Warfel, who had both started the first four games, came off the bench as Cook rewarded some girls who practiced well and experimented with his deep roster.

“We just want to keep it competitive in practice,” Cook said. “We’re not trying to fix anything. We’re just trying different things. It’s a nice group to be able to do that with.”

The change didn’t rattle Brunnemer, who made seven straight field goals in the first half after missing her first shot, and then also made four straight in the third quarter.

And she sparked part of her offensive game – much of the entire team’s offensive game – with her defense. Playing at the top of a 1-3-1 zone defense, she used her length to disrupt Greenfield’s offense almost every possession.

“She’s really long and active, and she’s got a good motor where she can keep going, and anticipation is a huge asset of hers,” Cook said. “It’s just a little much for some guards. That’s a tough job trying to get it reversed, and then we’ve got Kylea Lloyd on one side of that wing, you’ve got two close to 6-foot tall girls trapping you at the half line is not very fun.”

Pendleton improved to 5-1. Greenfield is winless in five games.

Brunnemer likes seeing the results of her defense.

“It helps us out because I like to trap toward the start, and then they don’t get to the bottom, so they don’t get scoring as much,” she said. “I like being at the top like that.”

Back-to-back possessions in the third quarter illustrated that. First she flustered the Cougars guard, and an errant pass led to a steal by Abi Rosenkrans, who dished the ball to a streaking Brunnemer for the lay in. On the next possession, Brunnemer got the steal herself and was fouled trying to get to the basket.

That was part of an 8-0 run. That is, eight for Brunnemer, zero for Greenfield. She got another fast-break lay in and then drained a 3-pointer, stretching the Arabians’ lead from 49-27 to 57-27.

A couple minutes later Pendleton reached the 35-point advantage, and the last six minutes were played with a running clock.

The Arabians managed an 18-10 lead after the first quarter, with the final three coming on a Brunnemer shot at the horn.

And they stretched it out quickly in the second, scoring the first 10 points for a 28-10 lead. Much of that was behind Brunnemer, as she scored twice on transition lay ins and also drained two 3-pointers for a 10-point quarter.

JV: Greenfield-Central hung on for a 37-34 victory. Pendleton erased a 10-point deficit in the final four minutes, tying it on an Isabelle Williams 3-pointer before the Cougars regained the lead for the win. Williams finished with 17 points, and Tra’mya Herndon added seven.