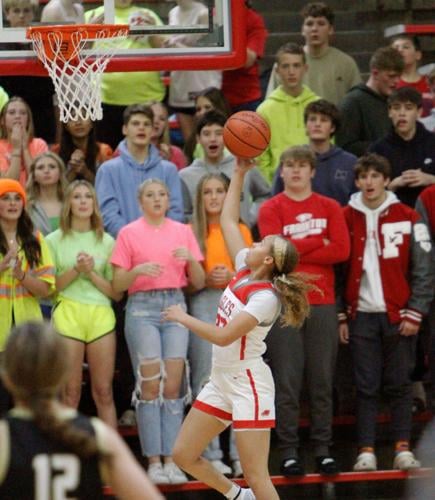 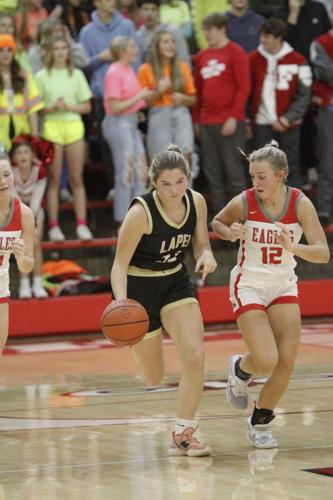 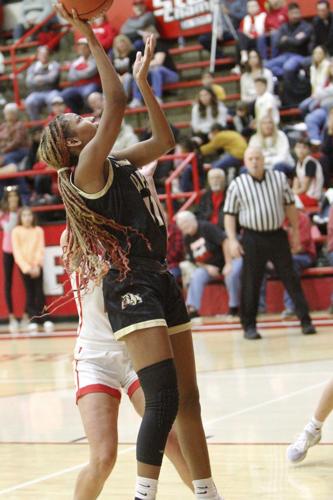 Lapel's Laniah Wills drives up the lane to the basket Friday against Frankton. 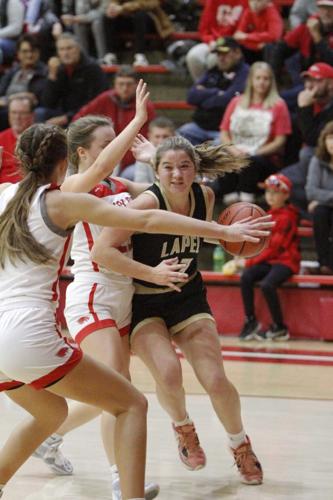 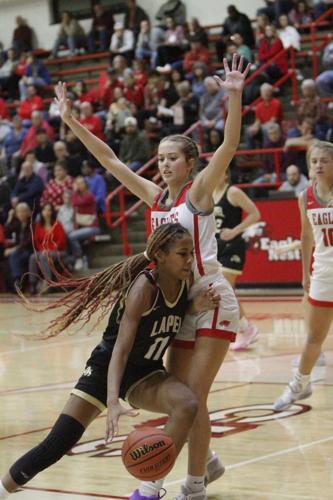 Lapel's Laniah Wills drives up the lane to the basket Friday against Frankton.

FRANKTON — It was fitting after hanging his hat on defense, it was an extra special effort on that side of the ball that paved the way for a milestone victory for Frankton girls basketball coach Stephan Hamaker.

Amaya Collins scored 15 points and Emma Sperry recorded a double-double while the Eagles defense held arch-rival Lapel without a field goal for over 10 minutes of game time and defeated the Bulldogs 50-39 on Friday night at the Eagles’ Nest.

Lapel dropped to 2-3 on the season while Frankton improved to 4-1 with its second straight win and the 200th in the career for Hamaker.

The two-time state runner-up coach said he owes all of his success to the current team as well as the many players he has led during his career, just beginning its 12th season at the helm of the Eagles.

Once his trademark defense took over in the third quarter, there was no looking back for the Eagles.

Junior Emma Sperry hit a 3-point basket on Frankton’s first possession of the half and a second moments later to give the Eagles their first lead at 31-29 after Lapel scored the first seven points of the game. Consecutive Bella Dean layups — assisted by Collins — and a Sperry free throw made it an 11-0 Eagles run before Lapel freshman Laniah Wills made one of two free throws to end the drought.

That was the only Lapel point of the third quarter as the Bulldogs were outscored 15-1 and committed eight turnovers — compared to just seven in the entire first half.

“We’re always like that. Sometimes we’re not as intense,” Sperry said of her team’s defense. “We talk about it all the time, and we really excelled at it in the third quarter.”

“Especially after the first quarter we took the press off because they were making those 3s in transition,” Hamaker said. “At halftime, we made some small defensive adjustments to limit where Wills was going to catch the ball. I thought Haylee (Niccum) could hold her below her average, but I thought the real key was the other girls holding the other players below their averages.”

Wills, who scored Lapel’s last first-half field goal in the final moments of the second quarter, made the next Bulldogs’ score from the floor with 5:39 left in the game when she converted a 3-point play.

But, by then, the Frankton run had grown to 19-1, and the Eagles were firmly in control.

Wills finished with 23 points and 11 rebounds — the fifth double-double in as many games for the 6-foot newcomer — but no other Bulldog scored more than seven points, and she accounted for all 10 of Lapel’s second-half points.

“I think we wore them down, too,” Hamaker said. “If anything, we could say the press was good for that in the first quarter. They were riding their adrenaline, and once we made them start grinding out possessions, their fatigue started to show.”

Sperry ended her night with 11 points, 13 rebounds and four steals, Niccum finished with 13 points and five rebounds for the Eagles while Dean added eight points and three assists.

“It’s a huge confidence builder,” Sperry said. “We’re comfortable in those situations. We know we can come back because we’ve done it now.”

The Eagles travel to Kokomo for a game versus Taylor on Tuesday while the Bulldogs will host Guerin Catholic the same evening.

The Bulldogs held on for a 34-28 junior varsity victory led by nine points from freshman Kaylyn McMillan. Freshman Macy Curtis of Frankton led all players with 12 points.

To play the media you will need to either update your browser to a recent version or update your Flash plugin.