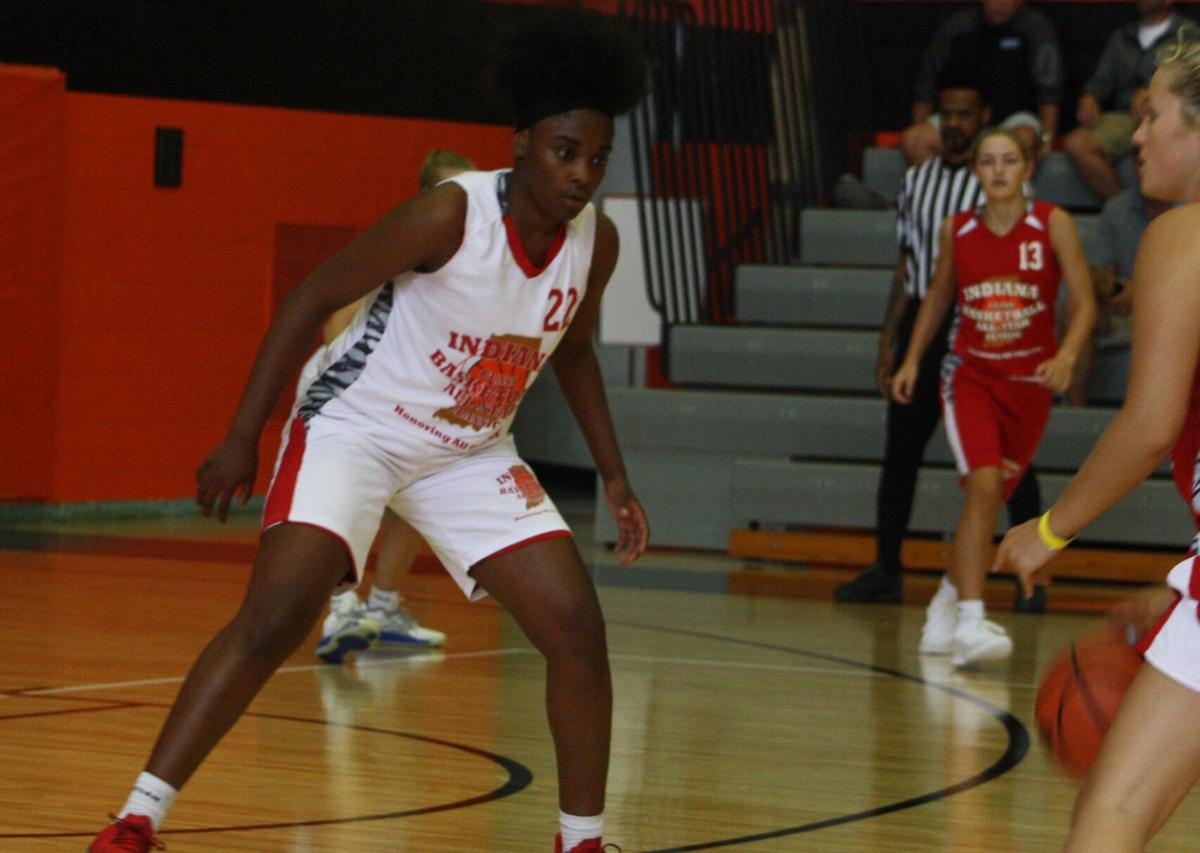 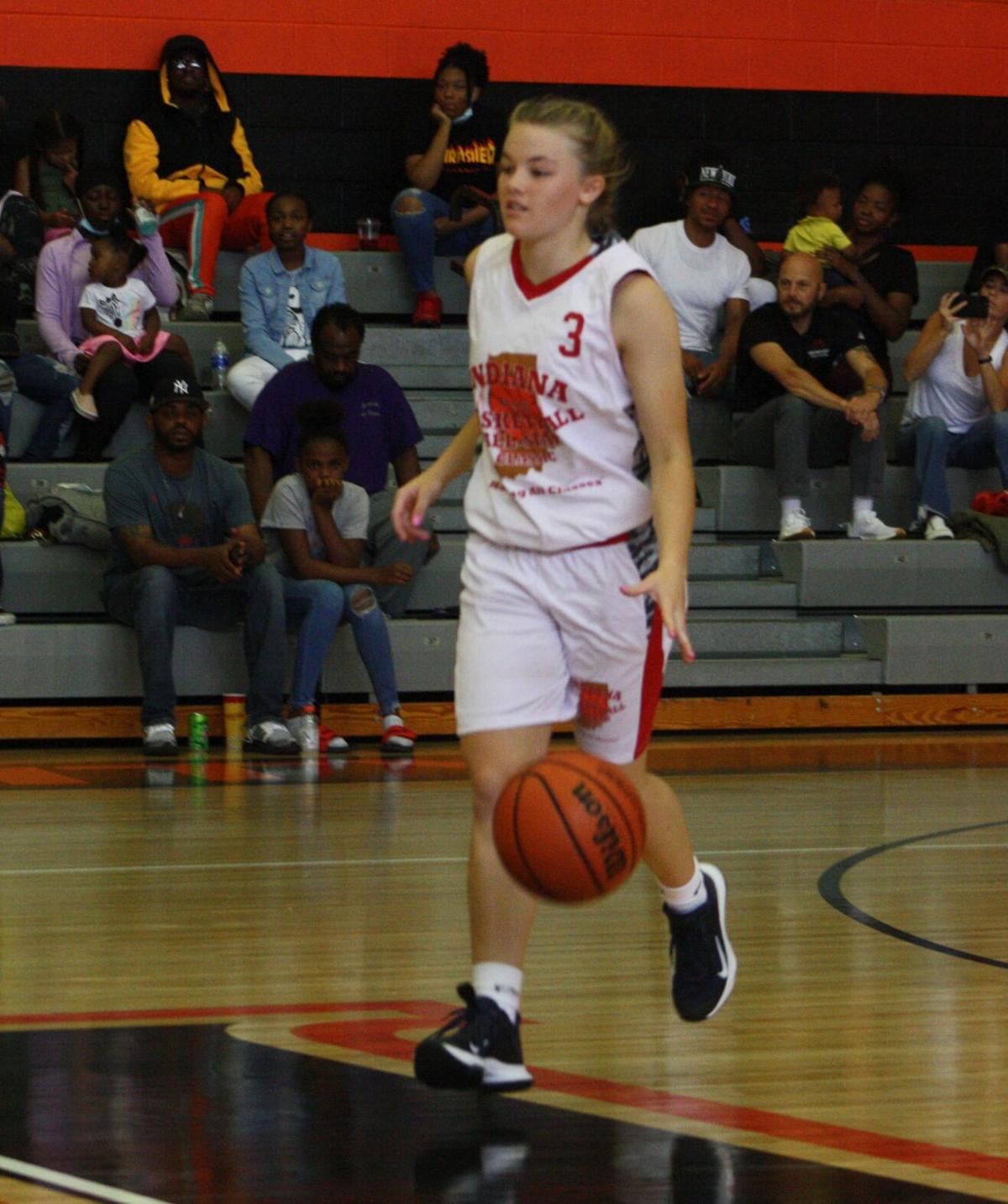 Kathryn Perry dribbles the ball across the timeline in Saturday's All-Star Classic. The Shenandoah senior finished with 18 points in her final high school game. 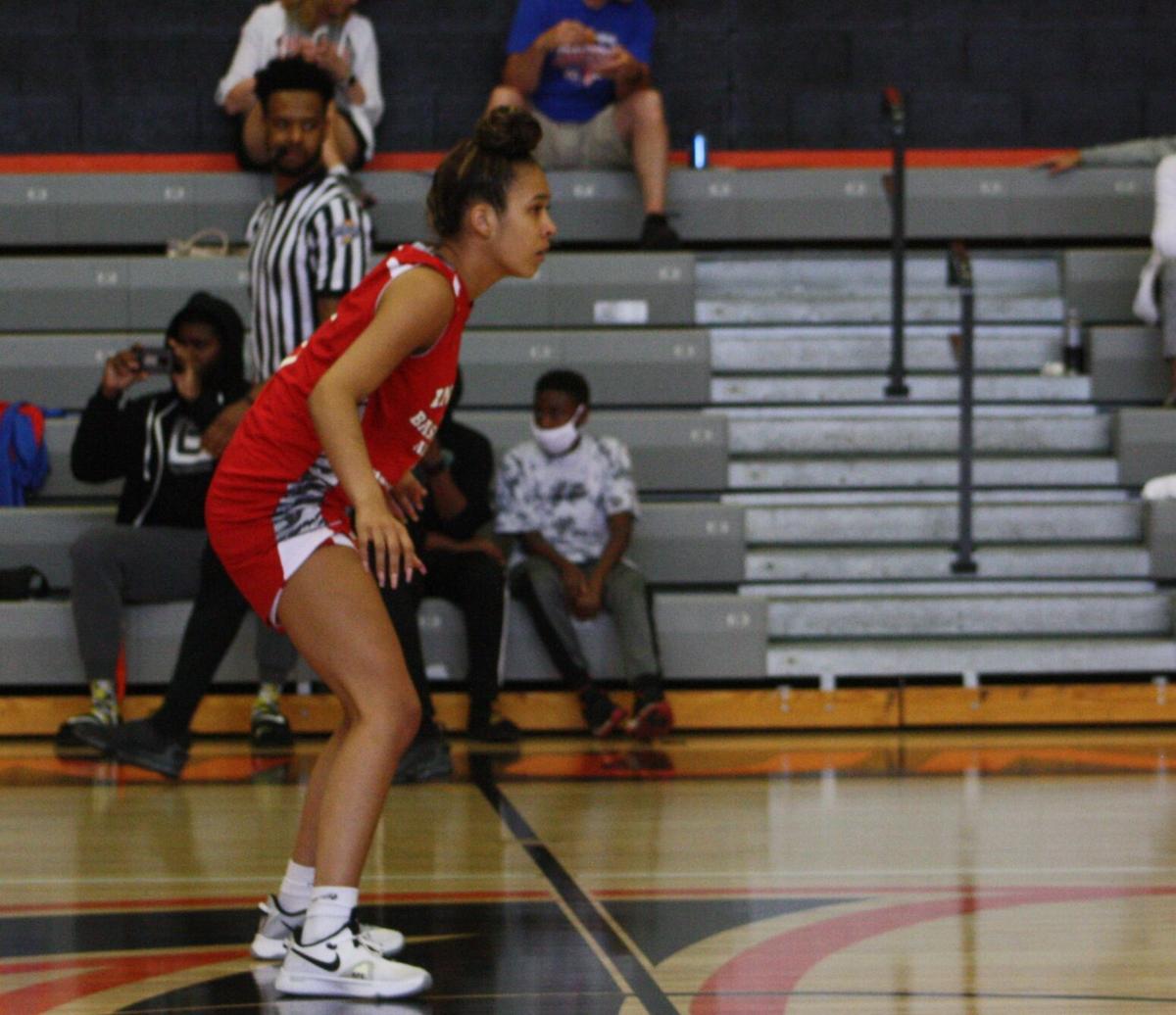 Alexandria's Reece VanBlair readies herself at the center court line to guard the ball handler.

Kathryn Perry dribbles the ball across the timeline in Saturday's All-Star Classic. The Shenandoah senior finished with 18 points in her final high school game.

Alexandria's Reece VanBlair readies herself at the center court line to guard the ball handler.

ANDERSON — All good things must come to an end.

This is also true of great things, including the high school basketball careers of Tyra Ford of Anderson, Kathryn Perry of Shenandoah and Reece VanBlair of Alexandria, which concluded Saturday morning at O.C. Lewis Gymnasium on the campus of Anderson University in the Seniors game of the 13th annual Indiana Class Basketball All-Stars.

Ford and Perry topped the scoring list for the White All-Stars and, while a first-half knee injury hampered VanBlair’s efforts, it was her Red team that prevailed 76-74 when Kenadie Fernung of Tri-Central hit a 3-point basket at the buzzer.

It was a vintage game for both Ford and Perry.

Anderson’s all-time leading girls scorer finished with a team-high 23 points on 9-of-15 field goal shooting — including 2-of-5 from 3-point range — made all three free-throw attempts and grabbed nine rebounds. After being left off the Indiana All-Star squad, she played like she was sending a message in her third time at this event.

“I feel like I deserved it, but these things happen,” Ford said. “I played OK, but I was kind of winded, so I couldn’t run like I wanted to.”

Ford and Perry, as well as Yorktown’s Carly Culberson, spearheaded a second-half comeback from a 14-point deficit. The Raiders' all-time leading scorer scored 14 of her 18 points in the second half — including three consecutive 3-point baskets — handed out two assists and had three steals.

She was also playing in her third classic and has been teammates with Ford all three years.

Culberson added 16 points and led all players with seven steals as the White team — coached by Shenandoah’s Dameon Wyatt -- ramped up the defensive pressure to mount the comeback. Even in a fun all-star environment, the intensity during the third and fourth quarter felt like a regular season or playoff game.

“That’s why these kids are here. When it does get close, they don’t want to lose,” Wyatt said. “They’re competitors at heart, and that switch just never turns off. It just doesn’t. Even as a coach, in the second half, I said let’s keep our legs fresh and then we’ll pick it up. We made it a game, and it was fun.”

In her first All-Star appearance, VanBlair was playing on the court she will call home next season. Despite a second-quarter knee injury that sidelined her for much of the second half, she finished with one point and five rebounds — including a key offensive board late -- and said she enjoyed the experience.

“It was fun, but I would rather have been on their team,” VanBlair said of Ford and Perry.

The three players combined for 5,173 points in their careers and share a mutual admiration for one another.

“I never wanted to guard you or you,” VanBlair said to her counterparts. “These are the players you don’t want to guard. You want them to graduate.”

It was also the last chance for Wyatt to coach Perry, who will continue her career at St. Mary-of-the-Woods next season. He said Perry’s improvement as a player over the last four years has only been surpassed by her growth as a leader.

“What I noticed sitting back today, and she doesn’t know many of these kids, she was running our pregame at Shenandoah with these kids,” he said. “And they just listened and she took over. That’s the leader she’s become. Her freshman year, I would have never thought she would have come to that point, leading an all-star game and telling them what to do and how to do it.”

Wyatt was also impressed with the IUPUI-bound Ford in his first opportunity to coach her.

“She glows as a person,” he said. “I just saw her play, so I know her talent, but her as a person — just like Kat — great kids. You can say the same thing about these kids all down the line. You can say something positive about them.”