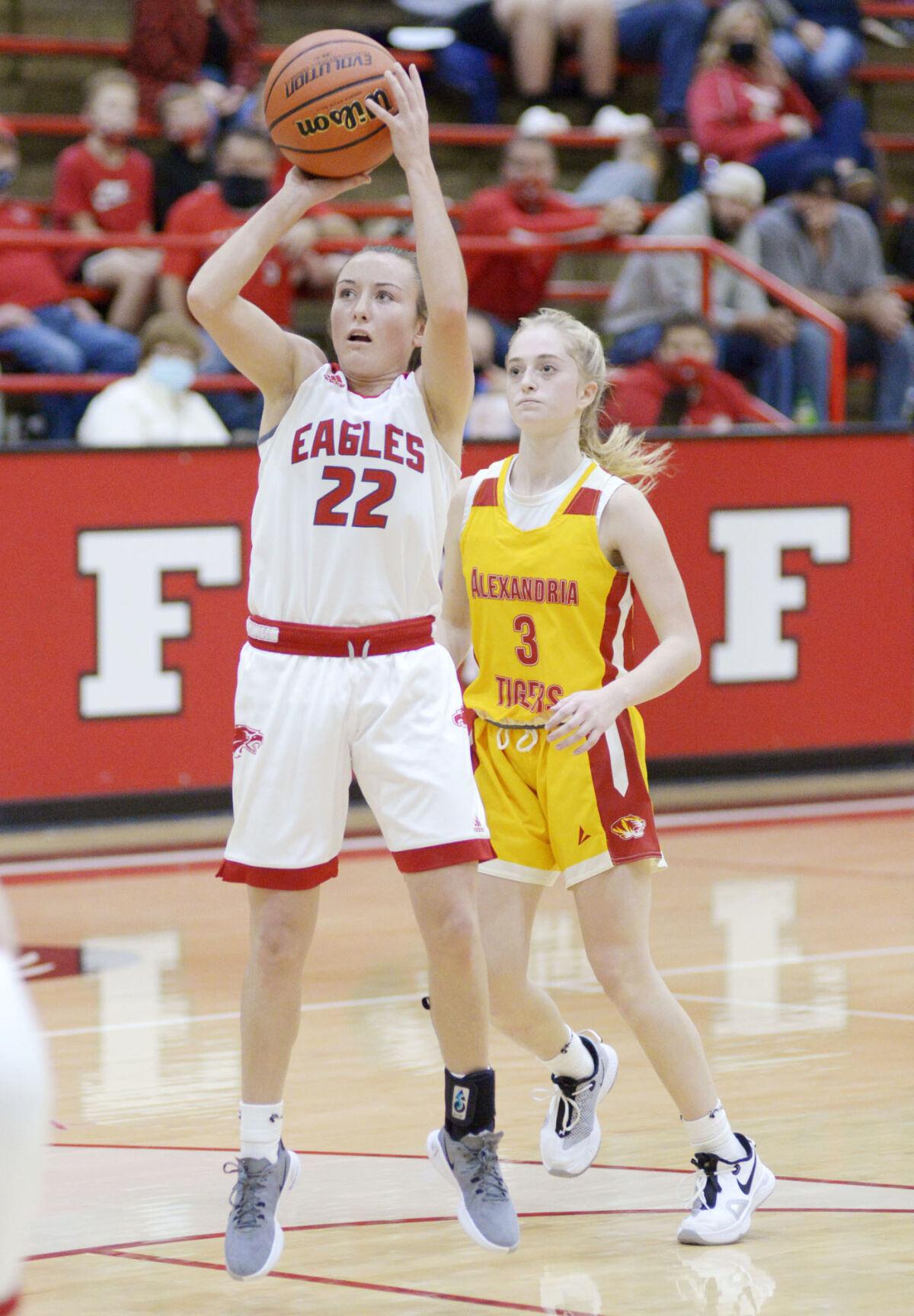 Frankton’s Cagney Utterback pulls up in the lane for a jumper as the Eagles hosted the Tigers from Alexandria on Friday. 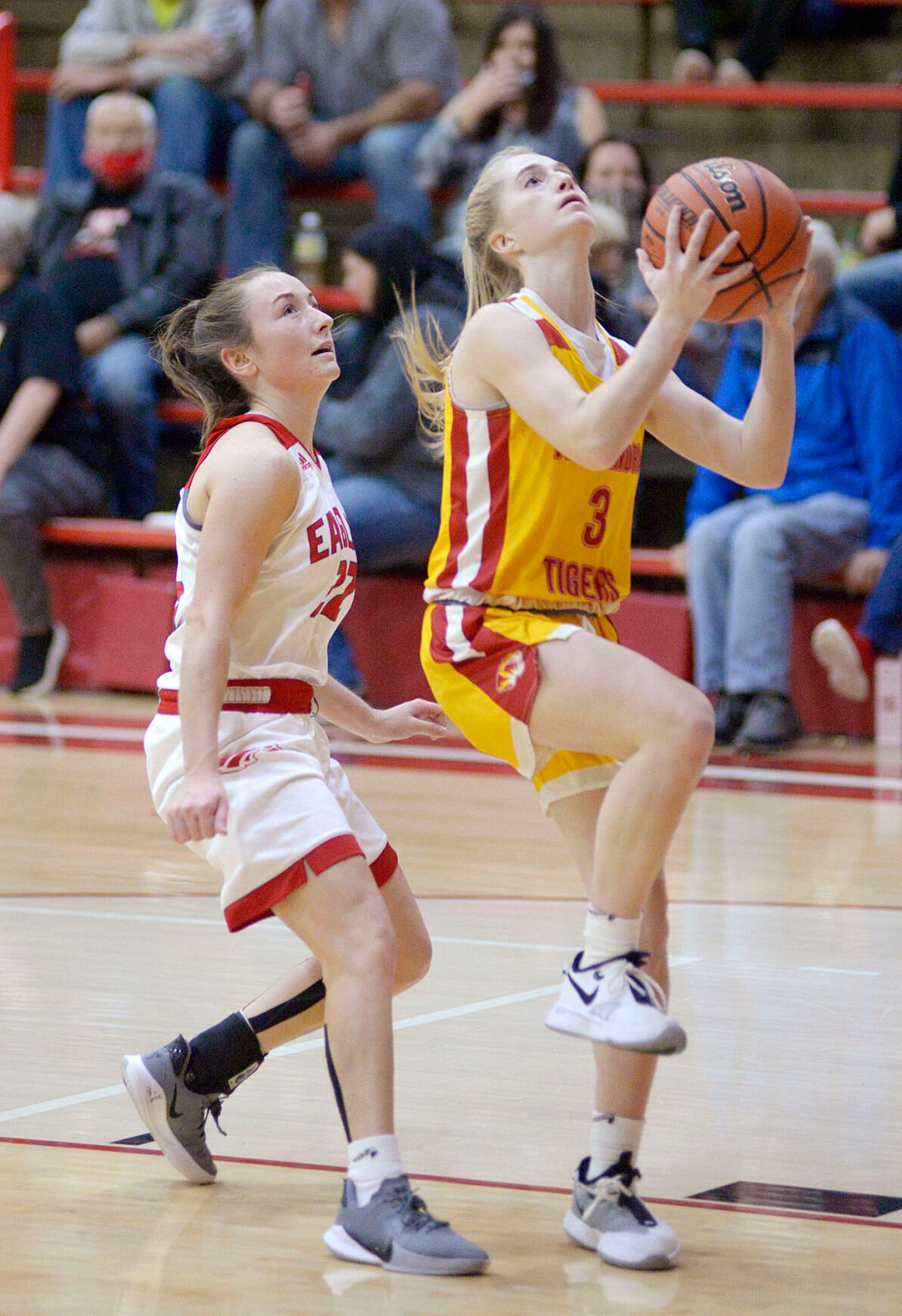 Alexandria’s Jada Stansberry lays up a basket on a fast break after a turnover with Frankton’s Cagney Utterback a step behind her on Friday. 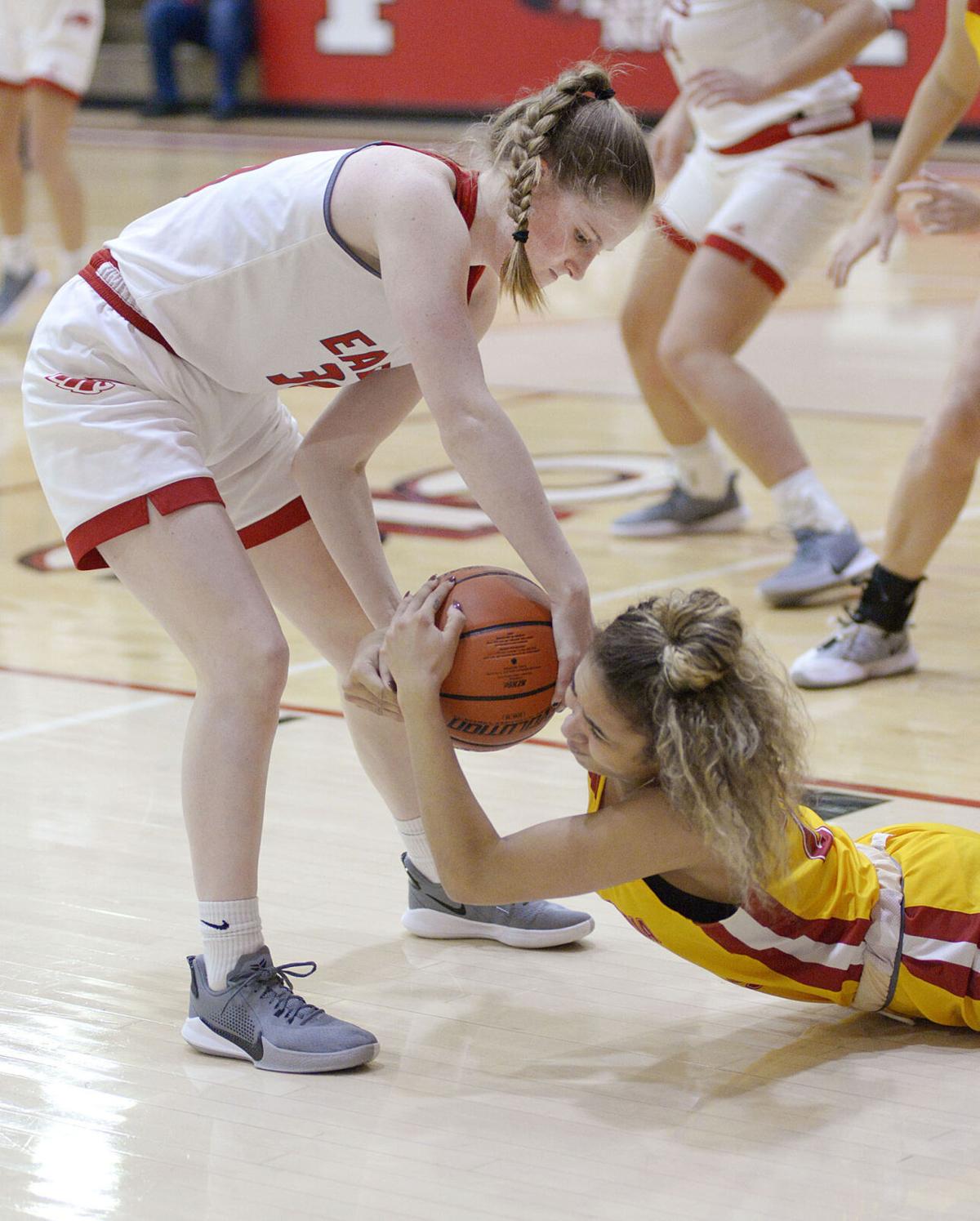 Frankton’s Lauryn Bates and Alexandria’s Reese VanBlair both grab a loose ball resulting in a jump ball on Friday.

Frankton’s Cagney Utterback pulls up in the lane for a jumper as the Eagles hosted the Tigers from Alexandria on Friday.

Alexandria’s Jada Stansberry lays up a basket on a fast break after a turnover with Frankton’s Cagney Utterback a step behind her on Friday.

Frankton’s Lauryn Bates and Alexandria’s Reese VanBlair both grab a loose ball resulting in a jump ball on Friday.

FRANKTON — In a battle of girls basketball unbeatens, the Alexandria Tigers were facing their sternest test of the young season with a Friday night visit to Class 2A’s second-ranked Frankton Eagles.

This may have been a scenario where both teams leave the gym feeling like they won something.

It was the Eagles who will remain unbeaten after pulling away in the second half, but the Tigers answered any doubters by battling until the end before falling 55-41.

“What I told the girls was that I didn’t think the moment was too big for them,” Alex coach Mickey Hosier said. “That’s what we, as a coaching staff, were looking for. Is it going to be too big for them, or would we run from the fight? I thought our girls fought and were right there at halftime.”

Alexandria (5-1) was in the fight from the very beginning. A pair of Jada Stansberry baskets and a Maddy Schuyler layup gave the Tigers a 10-7 lead over the Eagles, who did not help themselves with seven first-quarter turnovers — partially a result of Alex employing a triangle-and-two defense.

“Give them credit. We were trying to figure it out seeing that defense for the first time,” Frankton coach Stephan Hamaker said. “We knew we were going to see the 1-3-1, and (Hosier) did a good job of mixing it back and forth. Anytime you can do that, it never lets you get into a rhythm or a routine.”

But Ava Gardner scored on a layup and Lauryn Bates tacked on a free throw to pull Frankton even after one.

The Eagles took the lead for good on their opening possession of the second quarter as Bates — who led all players with 18 points and nine rebounds — scored on a drive to the basket and converted the three-point play after a foul. She then turned a midcourt steal into an open layup for a 15-10 lead.

Alexandria committed 23 turnovers, but those that were converted quickly into points hurt the Tigers the most.

“We’d rather have dead ball turnovers. We can throw the ball out of bounds and still set our defense,” Hosier said. “A couple of those times when they made their runs, we threw it, they got it and ran down and shot a layup. Against a good team, when the game is tight and we’re having a hard time scoring, we can’t have turnovers where they’re starting their fast break.”

Although the Tigers were never able to retake the lead, they kept things close in the first half. A late Reiley Hiser layup and Reece VanBlair free throw pulled Alex within 24-21 at intermission.

But a Gardner 3 and a pair of Bailee Webb free throws to open the third quarter for Frankton (9-0) began to stretch out the lead. A Bella Dean layup to close out the period gave the Eagles their first double-digit lead at 38-28. That lead grew to 13 on another Gardner trey in the fourth.

Consecutive VanBlair baskets pulled the Tigers within seven at 44-37, but they could get no closer.

Gardner and Utterback scored 11 points each for the Eagles, who got key contributions from Dean. The sophomore held VanBlair — who averages 20 points per game — to just 11 points and hit several baskets at key moments.

“Defensively, she’s pretty darn good,” Hamaker said. “And anytime we can get those buckets from her around the rim, she does a really good job of cutting in to that spot, and we seem to find her.”

VanBlair, who scored her 1,000th career point Monday, was joined in double figures by Stansberry with 13 points. The junior point guard also grabbed six rebounds and had two blocks, two assists and two steals for the Tigers.

“She’s just one of those kids that fixes things,” Hosier said. “When it’s kind of scrambled, she goes to another level and causes a lot of havoc. I think she’s grown a little this year as a point guard.”

VanBlair and Hiser grabbed eight rebounds each to lead the Tigers.