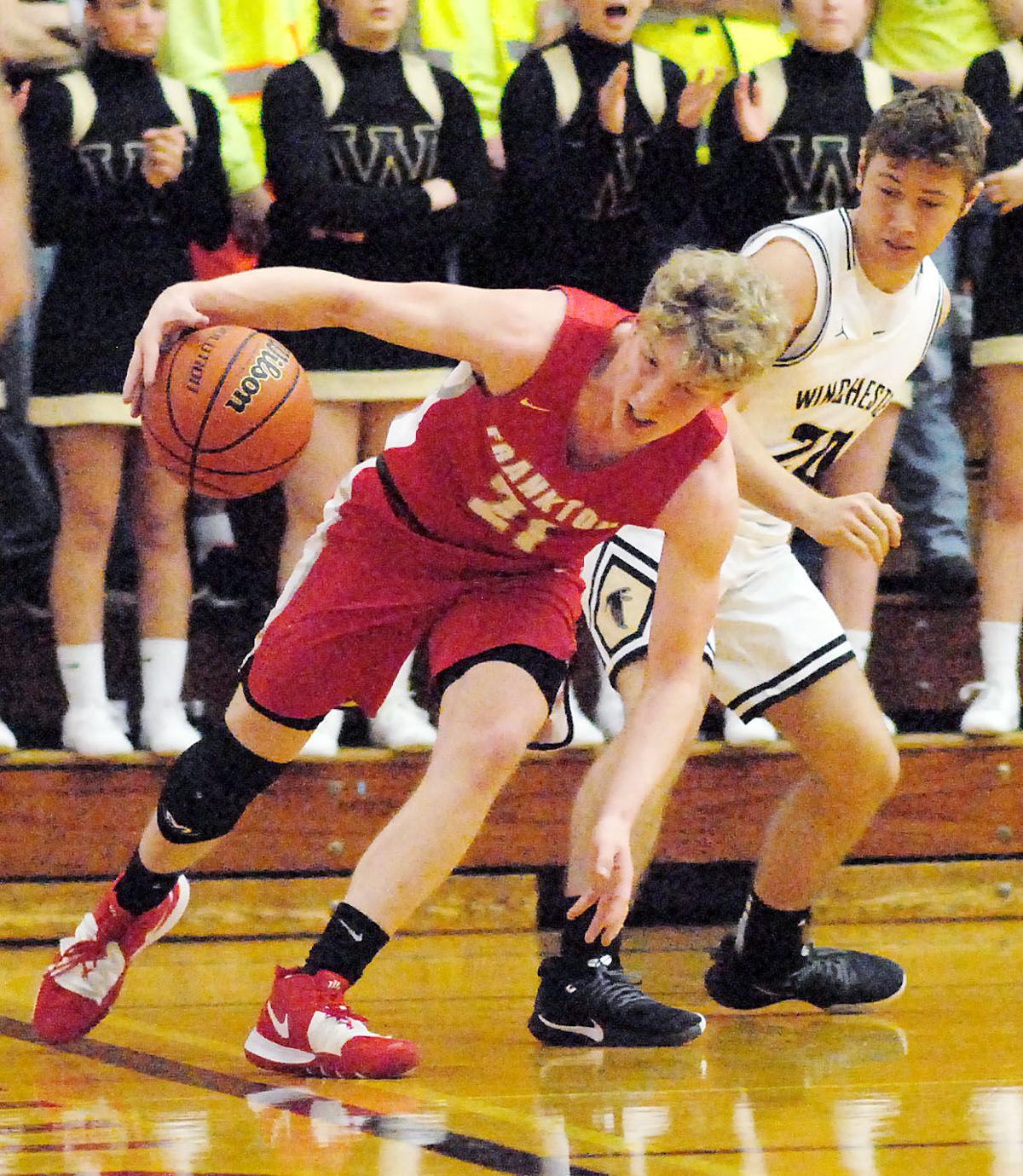 Frankton’s Luke Sheward tries to stay inbounds while driving toward the basket Friday against Winchester. 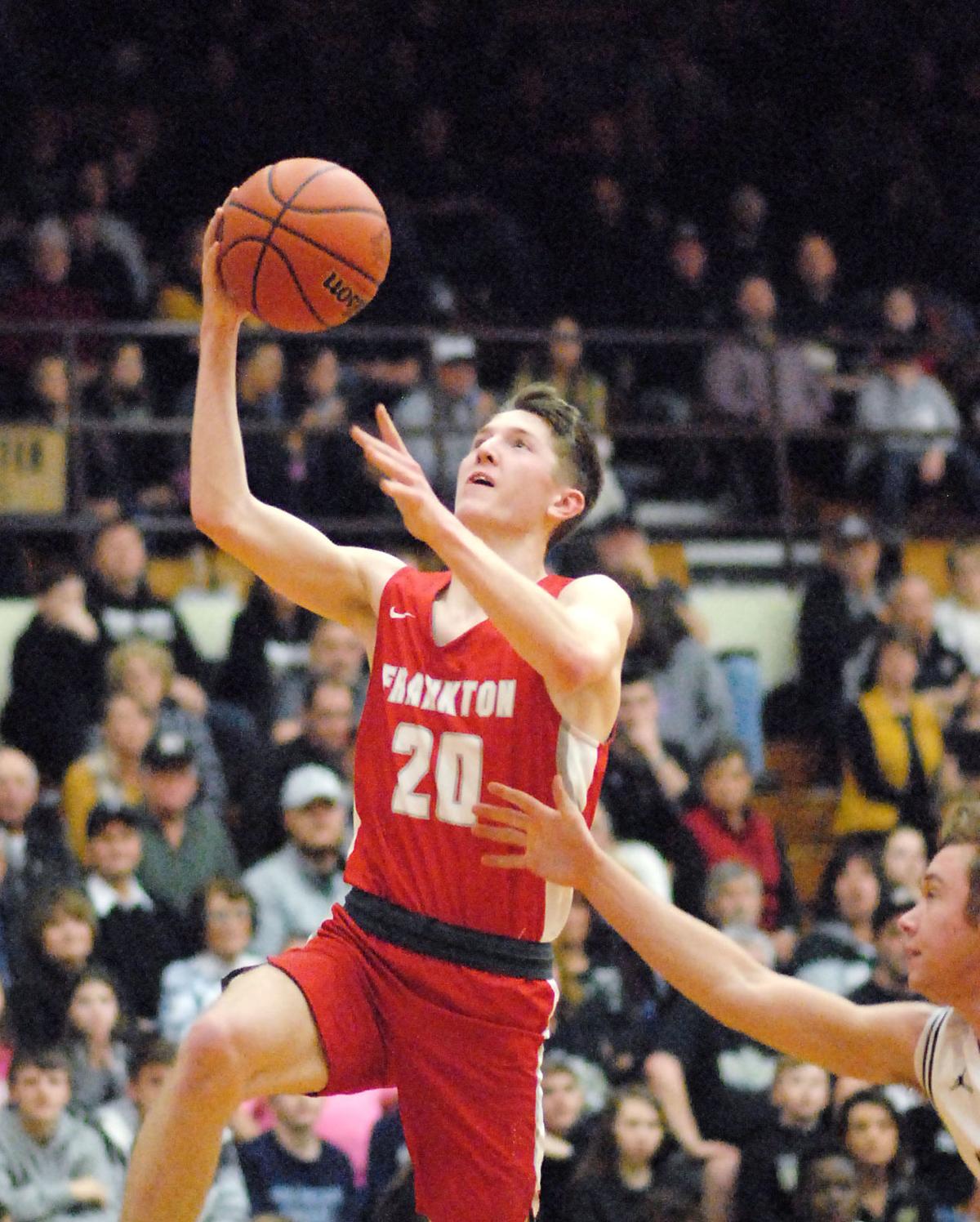 Frankton’s Jacob Davenport drives for a basket Friday against Winchester.

Frankton’s Luke Sheward tries to stay inbounds while driving toward the basket Friday against Winchester.

Frankton’s Jacob Davenport drives for a basket Friday against Winchester.

ALEXANDRIA – As disheartening as all the narrow defeats were for the Frankton Eagles this season, Friday night’s semifinal sectional win over Winchester probably made up for most of it.

The Eagles were outscored by one point in each of the first two quarters and trailed the Golden Falcons 34-32. But while Winchester may have scored 22 points in the second quarter, the Falcons only got 22 the rest of the game as Frankton won 60-56.

Frankton outscored its foe 12-11 in the third quarter, an example of how hard-fought and taut this game and the emotions were for both teams. When the Eagles gathered around coach Brent Brobston after the third, he told them, “We won that quarter. Let’s win this one.”

For the Falcons, 6-foot-8 junior Payton Sparks was a challenge to defend all evening. That task fell mostly to 6-3 junior Zach Davenport, though he had relief help from a variety of players, not the least of them 6-6 junior Ayden Brobston. Davenport collected three fouls in the first half and eventually fouled out with five points. He did hit a huge 3-pointer in the third period.

“Zach has gotten a bit more strength to use against him than Ayden,” said Coach Brobston. “We knew he would probably foul out at some point. The guards did a good job. They were supposed to jab, jab, jab at the ball (when Sparks brought it down to that level).”

Sparks scored eight points in the period, but the rest of his team scored just three.

The Eagles spurted past the Falcons with a 10-3 run over about a four-minute stretch. Ethan Bates drove to the hoop for a basket after Luke Sheward nailed a 3-pointer. Jacob Davenport hit two huge free throws to make it 55-50 with 1:43 to play.

Winchester went down low on the next possession and got a three-point play from Sparks. After a missed free throw by Frankton, the Falcons misfired on the other end. Bates went to the hoop for the Eagles and was fouled. He hit two more free throws, and it was 57-53.

“I know I’m going to get fouled,” said Bates, who led all scorers with 24 points, half of those at the charity stripe. “I’ve been working on them. The last few games, I’ve been shooting them a lot better.”

Hitting 12-of-15 is certainly very good.

“He did what you would expect a senior to do,” said Coach Brobston. “He was huge for us tonight.”

Winchester missed again, and there was a scramble for the rebound. The Eagles grabbed it and were hemmed in. Brobston looked ready to call a timeout, but one short pass and a length-of-court heave down to a wide-open Jacob Davenport put the Eagles on top 59-53.

Brooks Burelison hit a 3-pointer, his sixth of the game, and the lead was down to one possession with 8.2 seconds left. Frankton got the ball inbounds, and Bates was fouled. He hit one of his free throws for the final score.

After Bates’ 24 points, half of which came on 6-of-8 shooting from the field, Brobston was next with a double-double of 11 points and 10 rebounds. Sheward added 10 points, and Jacob Davenport had eight.

Wayde Sickels had an eight-point second quarter for the Falcons but was scoreless in the fourth and finished with a dozen points.

“This team is not afraid of losing,” said Coach Brobston. “They’ve done that in close games. They battled the entire game. Winchester is a very good team, and that was a big win for us.”