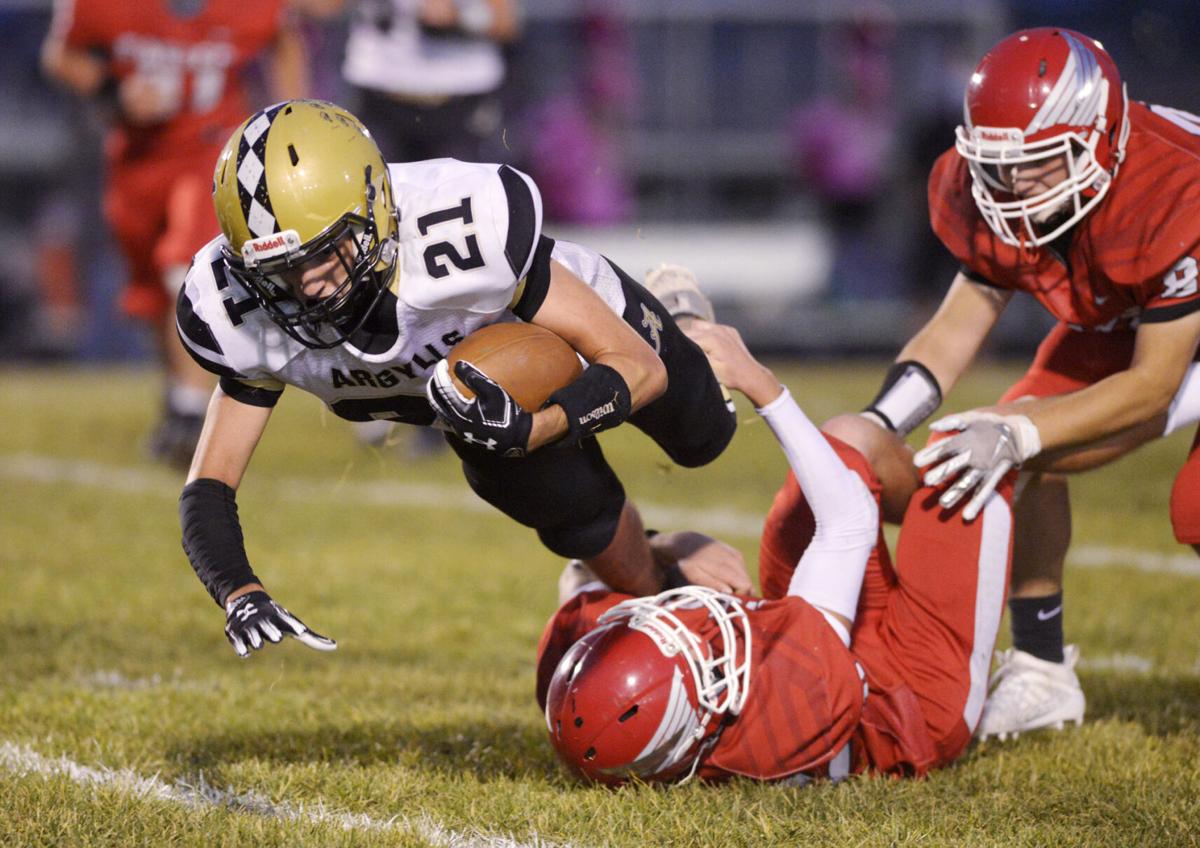 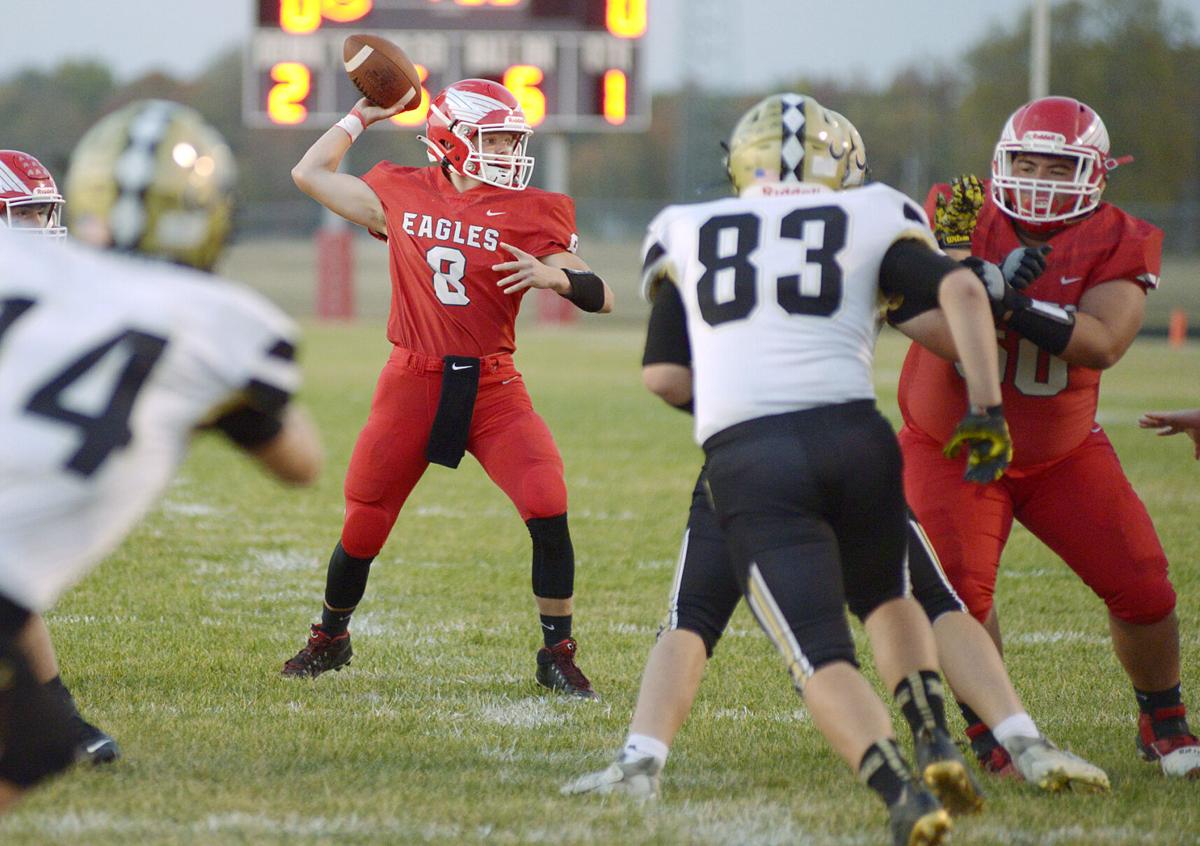 Frankton quarterback Gage Rastetter throws a 5-yard touchdown pass to Bradyn Douglas to put the Eagles up 6-0 as they hosted the Madison-Grant Argylls on Friday.

Frankton quarterback Gage Rastetter throws a 5-yard touchdown pass to Bradyn Douglas to put the Eagles up 6-0 as they hosted the Madison-Grant Argylls on Friday.

FRANKTON — For Madison-Grant running back Clayton Powell, Friday night’s game at Frankton did not start out the way he envisioned.

In fact, the senior’s night began in a way no Argylls fan had seen all season.

In Powell’s first nine carries, he gained just 17 yards and fumbled twice, losing one. It was the first time in 2020 he had coughed up the ball.

He more than atoned for the early mistakes.

Powell shrugged off his slow start and rushed for over 200 yards and a pair of touchdowns as Madison-Grant also bounced back as a team from a tough loss a week ago to win at Frankton 50-32.

“At first it was kind of hard. I mean I fumbled twice, and I really kind of lost me right there,” Powell said. “I just kind of kicked it in gear after that.”

After Korbin Finley’s first of three touchdown runs gave Frankton a 12-8 lead with 6:22 left in the first half, Powell found that extra gear.

On a drive that started at M-G’s 13-yard line, Powell broke of a pair of 40-yard runs to set up a Seth Lugar 1-yard plunge for a 16-12 lead after Lugar hauled in Jack Thompson’s pass for the 2-point conversion.

“I’m pretty sure that’s what started the route for everybody,” Powell said. “It was a struggle. We knew we weren’t going to come in here and walk all over them. We knew it was going to be tough just like last week.”

Lugar also had a big night, finishing with 152 yards on 14 carries and three touchdowns offensively and adding an interception defensively.

After another Finley score three plays later, the Argylls answered with an eight-play, 79-yard drive Powell capped with a 26-yard scoring run to send M-G into the locker room with the lead for good at 24-18.

Madison-Grant (2-4) showed some resiliency in snapping a four-game losing streak, the last of which was a heartbreaking overtime defeat at Elwood a week ago. Despite injuries to key players, the Argylls came through.

“We were down two offensive tackles tonight, we had a wing back down and another kid who wasn’t here all week and we were moving tight ends to tackles and wide receivers to tight end and just trying to piece it together,” M-G coach Brady Turner said. “These kids came to practice. They focused up. They were going off what we were telling them. They believed. There’s still some things defensively we have to shore up, but offensively, I thought we played pretty well.”

The Argylls put the game away as they scored on their first three second-half possessions. Lugar broke off a 53-yard touchdown run, and junior Trey Vetor added a pair of scores on 6- and 8-yard runs to build the lead to 44-18 late in the third quarter.

Finley scored late in the third, and Ephrem Nunley added a 37-yard touchdown run late in the fourth before Powell capped the scoring with a 2-yard run with 1:30 remaining in the game.

Powell finished the night with 201 yards on 24 carries and the two scores, overshadowing the nights had by Lugar and Finley. The Frankton senior rushed for 146 yards and three scores on 21 attempts.

Rastetter threw for 170 yards and a first-quarter touchdown to Bradyn Douglas.

Although the Eagles will host Lapel in the first round of sectional play, this was the final regular season game at the current location of Otis Cress Field. Frankton will move its games from the stadium at the elementary school to its new football stadium, currently under construction, at the high school next year.

In the final week of the regular season, the Argylls will host Class 2A powerhouse Eastbrook next Friday while the Eagles travel to Alexandria.