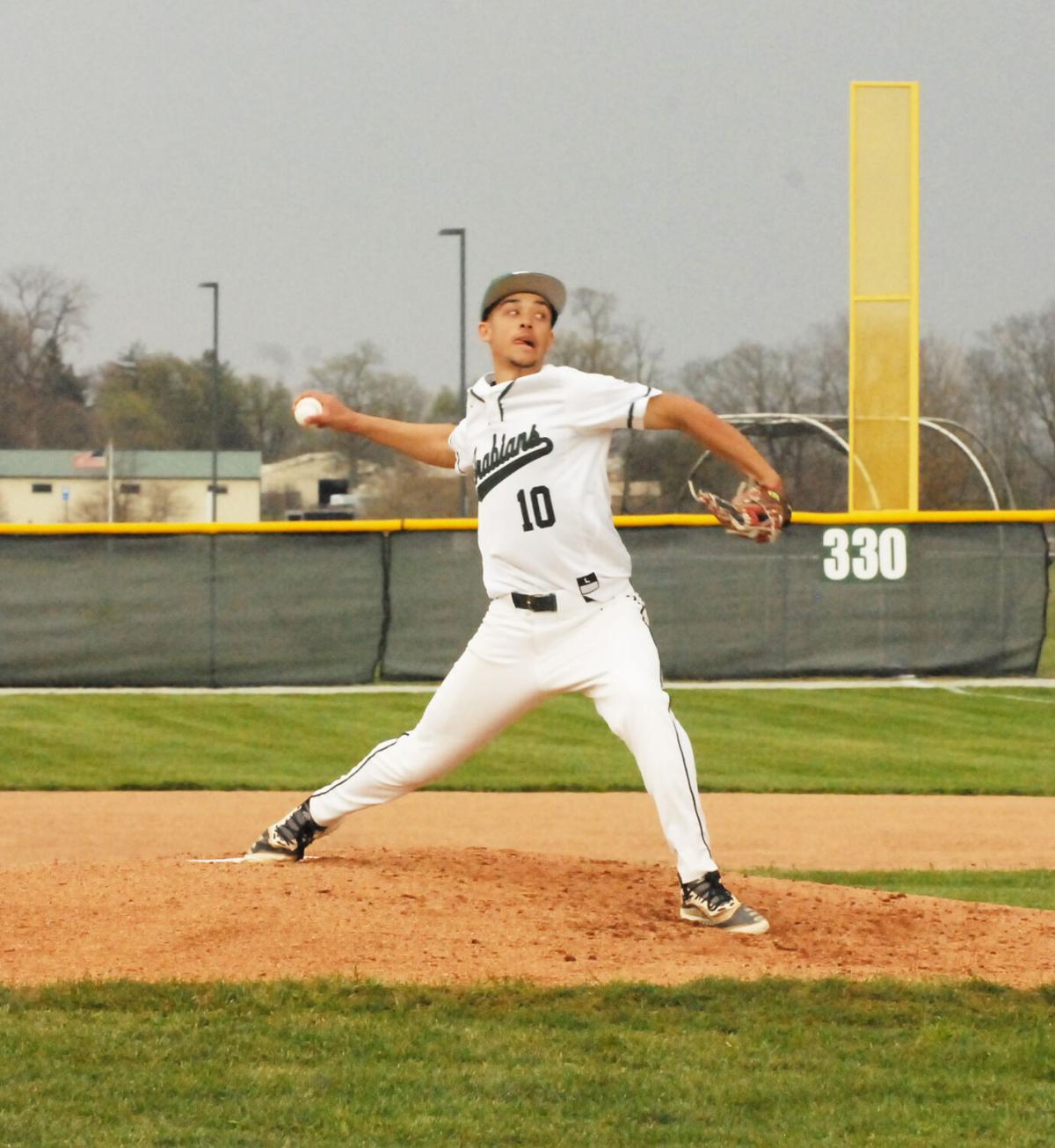 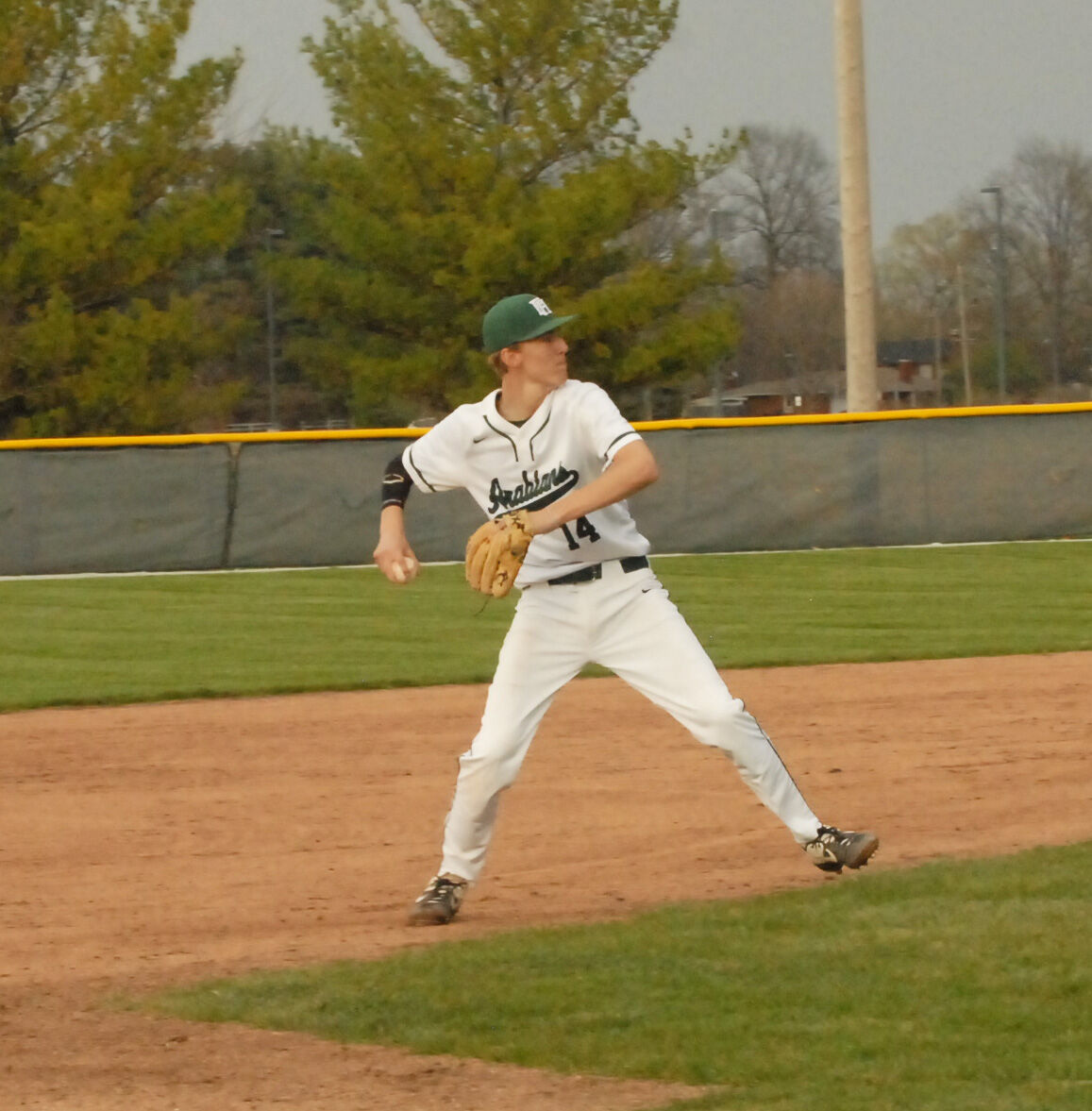 Pendleton Heights' Sam Conner gets ready to throw the runner out after fielding the ball at his third base position. 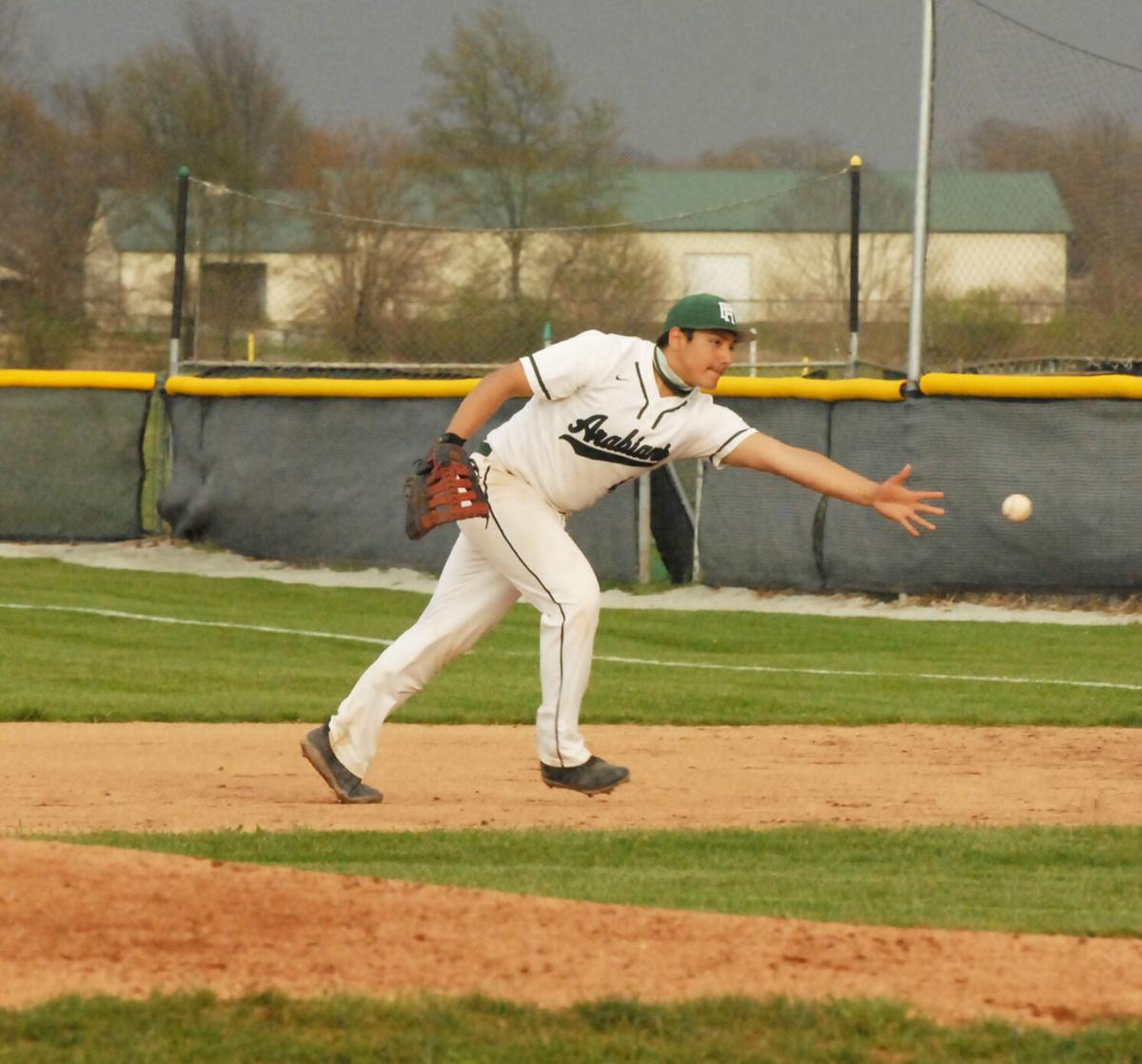 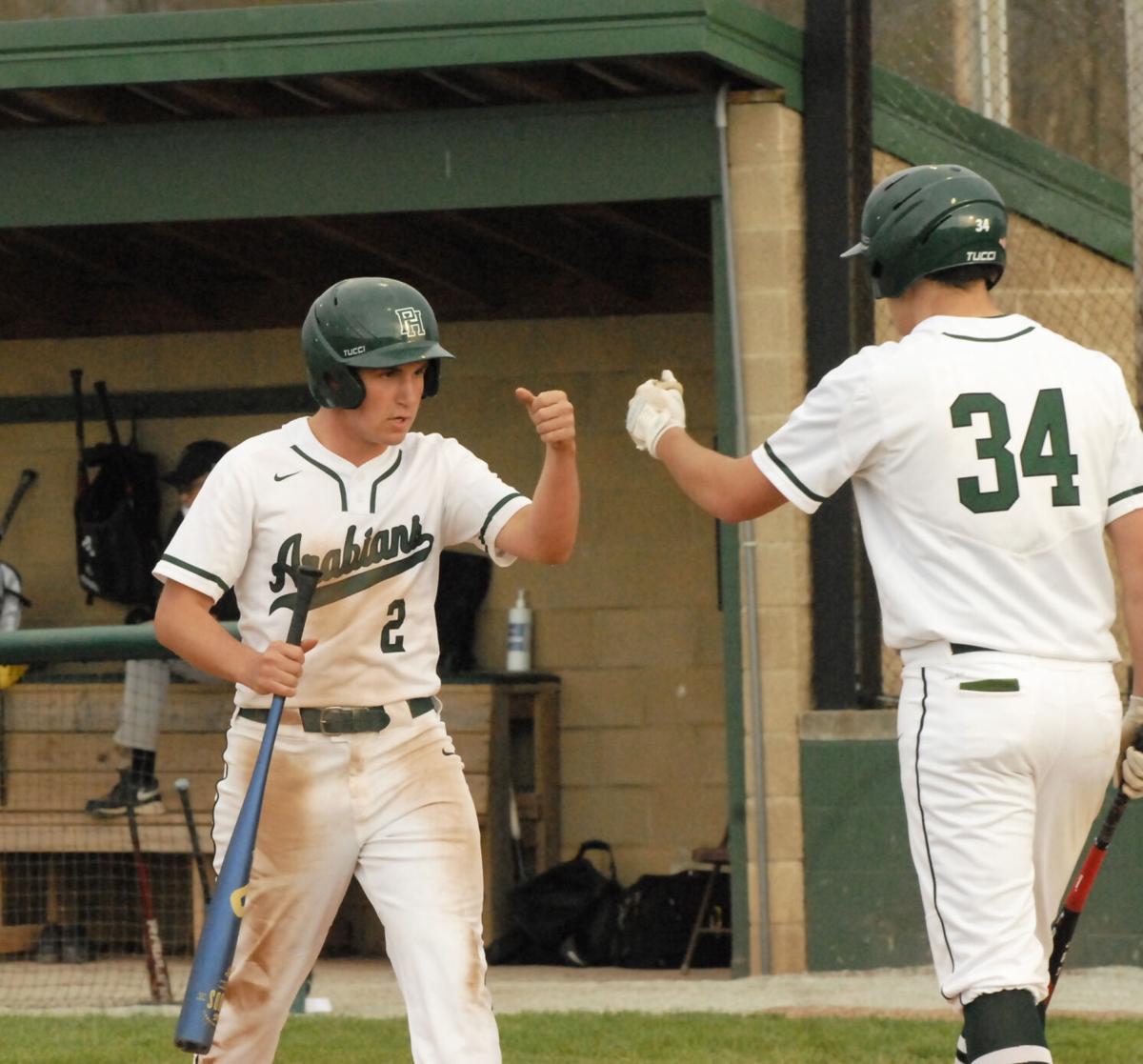 Evan MacMillan gets a fist bump from Hunter Eickenberry after scoring a run for the Arabians. 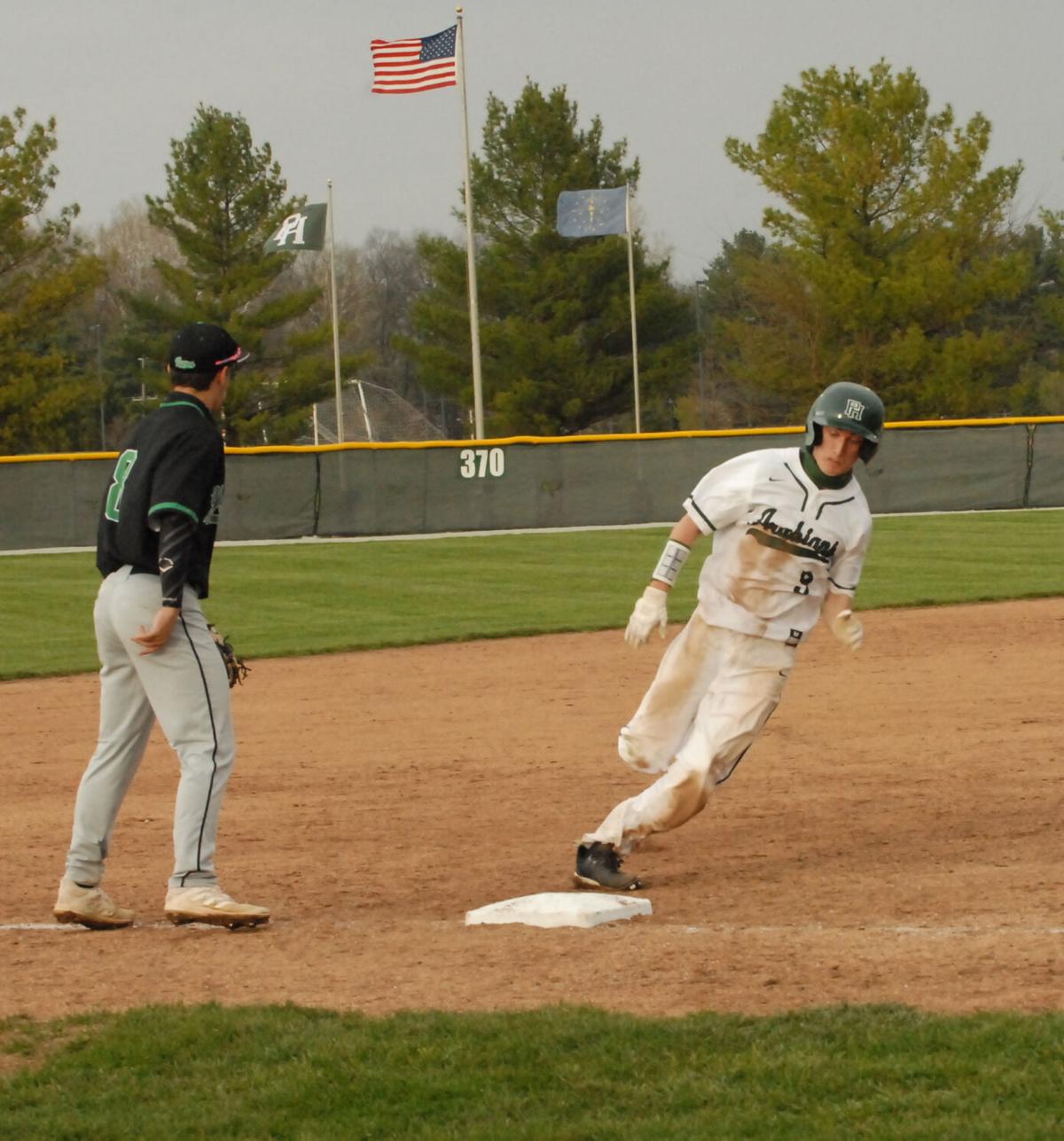 Ryan Graham rounds third base on his was toward home plate to score for the Arabians.

Pendleton Heights' Sam Conner gets ready to throw the runner out after fielding the ball at his third base position.

Evan MacMillan gets a fist bump from Hunter Eickenberry after scoring a run for the Arabians.

Ryan Graham rounds third base on his was toward home plate to score for the Arabians.

PENDLETON — In the early part of the 2021 baseball season, the problem for Pendleton Heights has not been on offense but rather with keeping the opponents off the scoreboard.

Against Wednesday’s opponent, a 3-0 Yorktown team that came in averaging 13 runs, sophomore Ricky Howell had the solution for that problem and then some.

Howell faced just two batters over the minimum in spinning the first Arabians’ no-hitter in at least a decade as PH defeated the Tigers 5-0 to salvage a split in the home-and-home Hoosier Heritage Conference doubleheader.

Howell walked three — two in the first inning — with one being erased on a double play. He struck out eight batters and finished strong, fanning four of the final six he faced. His breaking ball was effective right from the first pitch as he locked up the .833-hitting Cole Temple for a called third strike.

Howell, making just his third varsity appearance and second start, said it was the first no-hitter he had ever thrown at any level. He felt like he was going to have a good night after pregame warm-ups, and the his confidence grew after working around the two first-inning walks.

“I was down in the bullpen, and I could feel it today,” Howell said. “It really boosted my confidence. It helped because runners on base can sometimes shake you up. But I got through it, and — boom — there goes my confidence, and I was all good from there.”

Of that, there can be no debate.

After retiring the Tigers in order in the second and third innings, he issued a one-out walk in the fourth, but a Gage Smith line drive was picked off by third baseman Sam Conner who threw to first to double off the final runner for Yorktown.

Half of his strikeouts were called third strikes, and the defense played error-free ball behind him. Conner made two tough plays on grounders off the bat of Jackson Furnish for putouts. Hunter Eikenberry made a running catch of a bloop fly in the fifth inning, and Evan MacMillan bobbled a grounder from Jacob Pruitt leading off the seventh but gunned down the batter by a half-step.

The remainder of the outs were routine.

The Arabians got all the offense Howell needed in the first inning.

Ryan Graham led off with a bunt single, stole second and moved up to third on a Mitchell Cobb ground out. MacMillan hammered a double over the left fielder’s head to drive home Graham for a 1-0 lead.

That recipe worked again in the third inning, this time after Graham led off with a walk. He promptly stole second, and — one out later — scored on a MacMillan single. MacMillan advanced to second on the throw home and moved to third on a wild pitch. Maverik Mollenkopf then singled for a 3-0 lead.

It was Mollenkopf who started the final rally of the night when he led off the fifth with a double to left. Eikenberry singled him home but was thrown out trying to advance to third on an error. Howell was hit by a pitch, and his courtesy runner, Matthew Roark, moved to second on a wild pitch. Nathan Gilmet knocked Roark in with a single to right.

Aside from leaving nine runners aboard, Vosburgh had little to complain about.

“We have some room to improve. I think we should have scored probably four or five more runs tonight, if I’m being honest,” he said. “We’ve talked about putting together a complete game, but we hadn’t done that yet.”

Pendleton Heights (3-3) will play at Hamilton Southeastern on Saturday before beginning defense of their 2019 Nick Muller Memorial Baseball Tournament title next Wednesday at either Alexandria or Lapel.