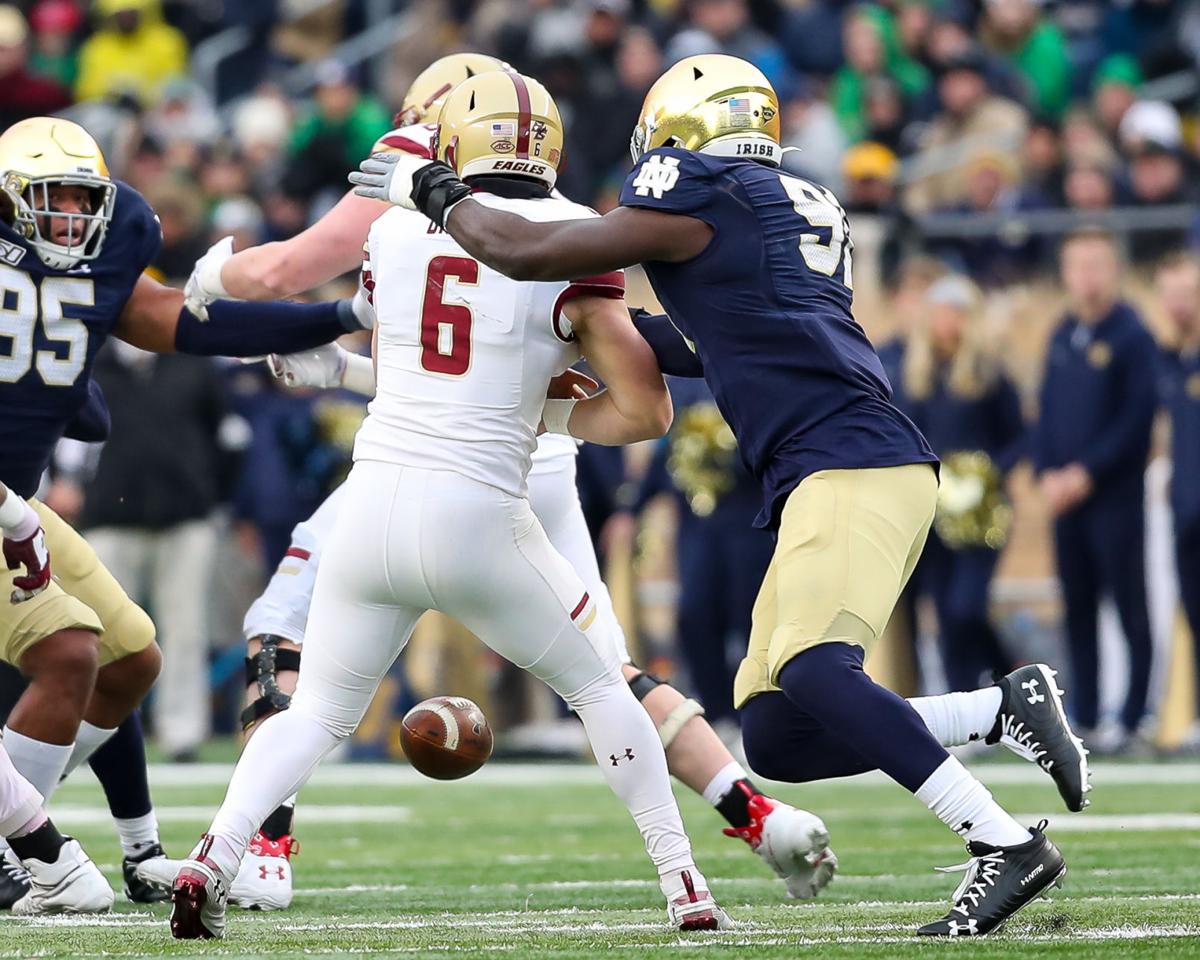 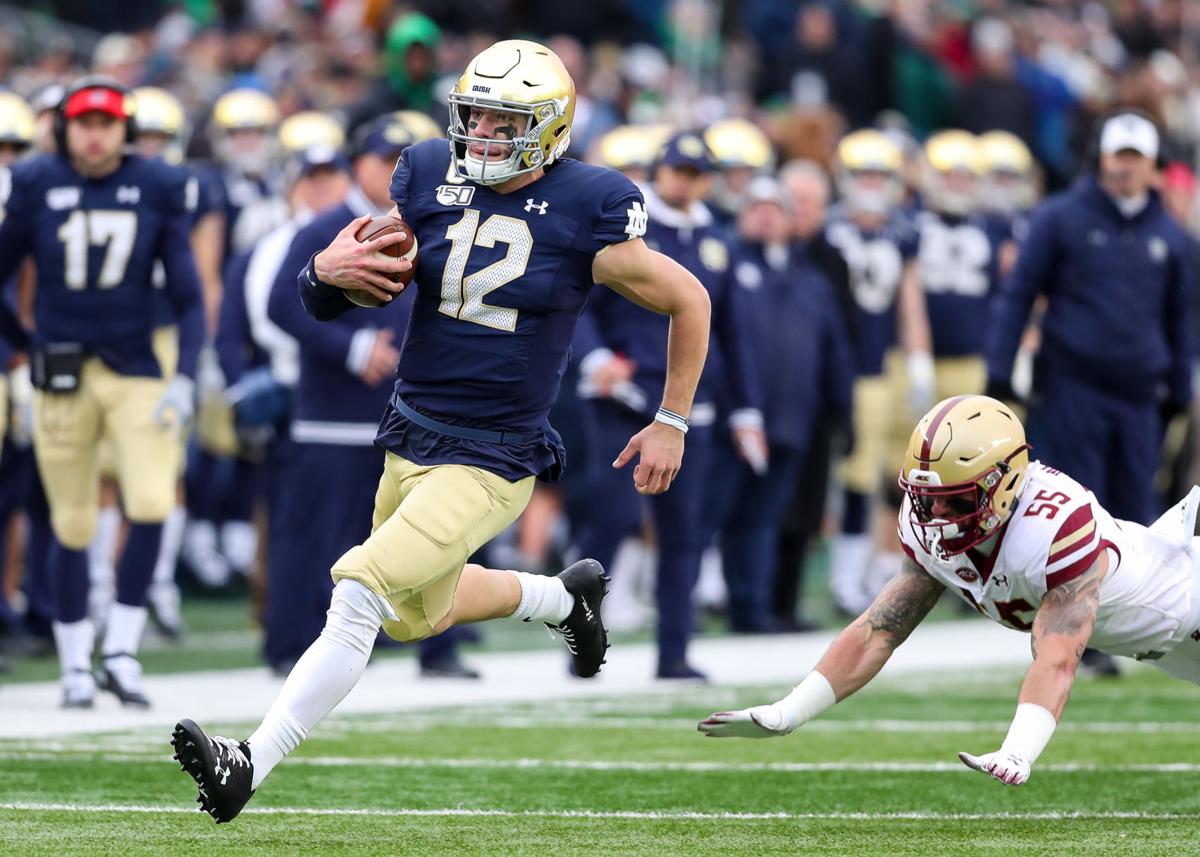 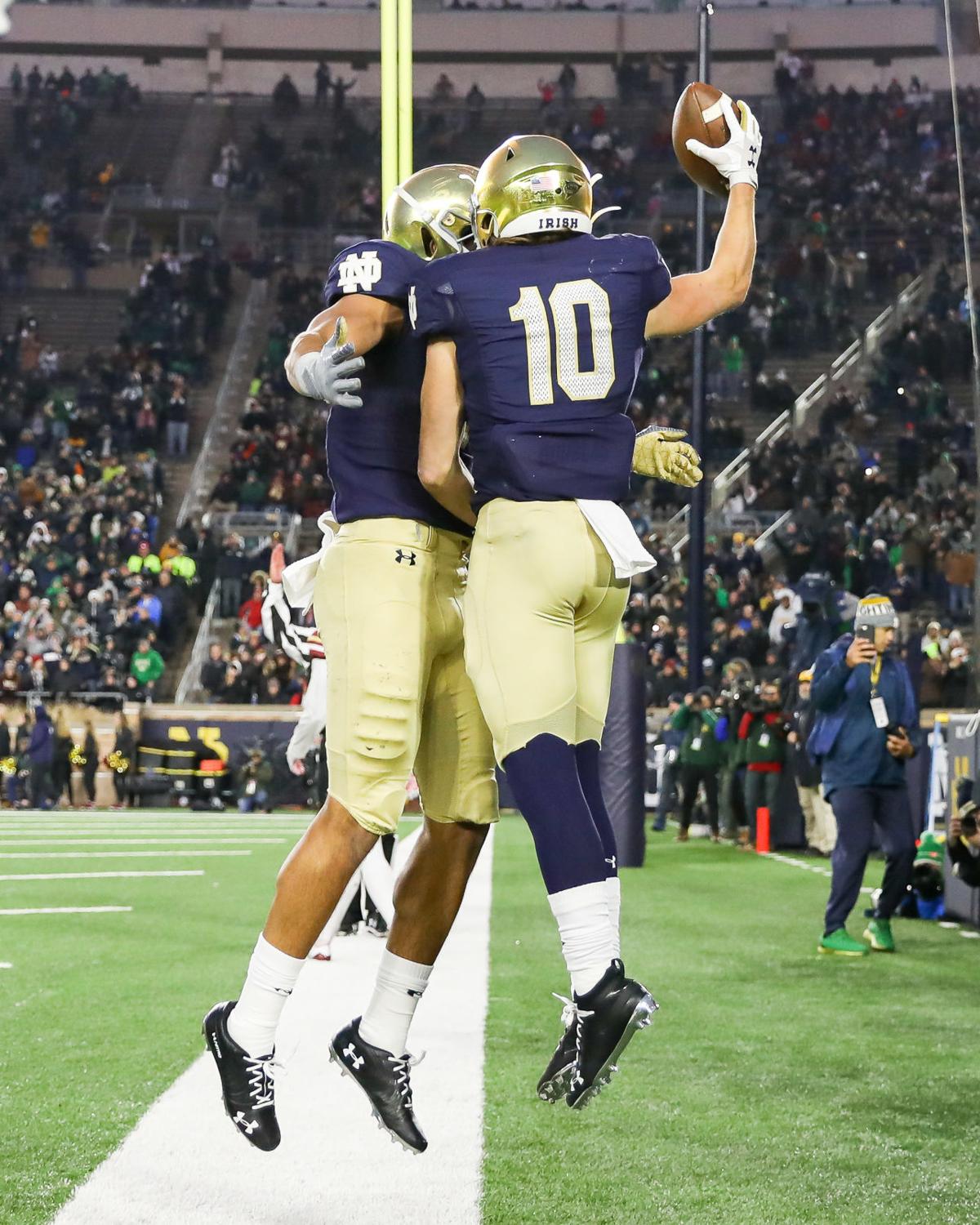 The Fighting Irish offense struggled to finish off drives early, as they settled for a Jonathan Doerer 47-yard field goal on their opening drive. Their next best scoring chance came early in the second, as Notre Dame marched down to the Boston College 11-yard line.

“We were a little uneven early on, and credit a little bit to Boston College,” Notre Dame coach Brian Kelly said. “I thought that their plan was outstanding. They did a lot of really good things that kept us off-balance. … We had to make some adjustments.”

The Eagles' offense mustered only 16 total yards in the first quarter, but they were able to put together a sustained drive following Notre Dame’s second field goal. They went on a 16-play, 84-yard drive that was capped off by a 1-yard touchdown run by quarterback Dennis Grosel. With 7:56 remaining in the first half, Boston College led 7-6.

Notre Dame countered the Eagles’ long drive with one of its own, though, going 75 yards on 15 plays. This time, however, the Irish found the end zone, as Book hit Claypool on an 8-yard slant route to make it 13-7.

“Huge,” Book said of the Irish’s first touchdown. “We knew what we had. We knew the looks that we were getting. We knew we could execute our offense. Coach (offensive coordinator Chip) Long did a great job of calling those plays, and we knew everything was going to work.”

Doerer then made two more field goals — one with one second left in the first half and the other midway through the third — to extend the Irish’s lead to 19-7. His 4-for-4 performance was the best he’s had since going 3-for-3 against USC on Oct. 12.

“Jon Doerer was outstanding during that period of time where we were a little uneven,” Kelly said. “He kicked field goals and kept us ahead of momentum swings, if you will. Those were big kicks for us.”

With the game still in doubt, the Notre Dame defense forced the game’s first turnover. Senior defensive end Khalid Kareem knocked the ball out of Grosel’s hands, and redshirt sophomore linebacker Drew White fell on it at the Boston College 40-yard line.

The Notre Dame offense capitalized on the great field position, as Book threw his second touchdown pass – this one to junior tight end Cole Kmet from 11 yards out — to give the Irish a 26-7 advantage.

The game officially was put out of reach on the next offensive play for Notre Dame. After the defense forced a punt, redshirt freshman wide receiver Braden Lenzy took a handoff and bolted up the left sideline 61 yards to the end zone. It was Lenzy’s second rushing touchdown of 50 or more yards this season. He had a 51-yard scoring run against USC.

“He makes fast people look slow,” Book added. “He’s really fast. When I can just hand it and watch him do that, it makes my life a lot easier.”

Book then threw a 7-yard touchdown pass to senior wide receiver Chris Finke in the fourth quarter, capping off the day for the Irish offense. Notre Dame finished with 501 total yards — 252 passing and 249 rushing. Two seniors, Claypool and Finke, caught touchdown passes, which was special for Book.

“You really want to get all the seniors into the end zone, no matter what, on senior night,” Book said. “It’s a special night you’ll never forget and being able to get those two in there was awesome.”

Defensively, Notre Dame contained one of the nation’s best rushers in Boston College’s AJ Dillon. The junior finished with 56 yards, his lowest output on the season. In total, the Eagles had only 191 yards of offense.

“It’s controlling the line of scrimmage. It’s not just one guy,” Kelly said. “We’ve lost two really good players on defense (seniors Julian Okwara and Daelin Hayes), but other guys have stepped in.”

One of those guys is senior Ade Ogundeji. The defensive end had two of the team’s four sacks against the Eagles and forced a fumble.

“The coaches put me in a great position to play,” Ogundeji said. “I just had to go out there and play hard, play fast, and I feel like I did that during this week. It paid off during the game.”

Notre Dame (9-2) travels to Stanford (4-7) next week in the season finale. The Irish will then wait to see where they go for a bowl game. That announcement should come on Dec. 8.