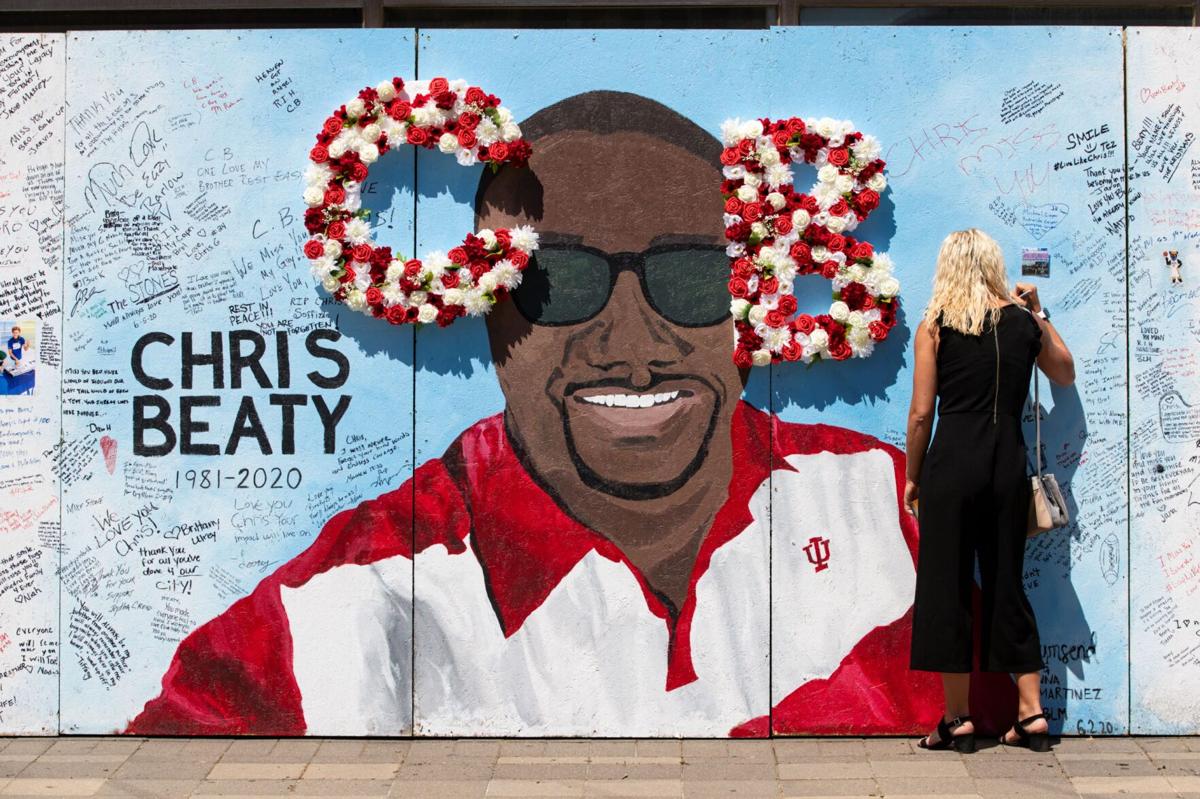 A mourner signs a tribute wall during a memorial service for former Indiana University football player Chris Beaty on June 12, 2020, in Indianapolis. 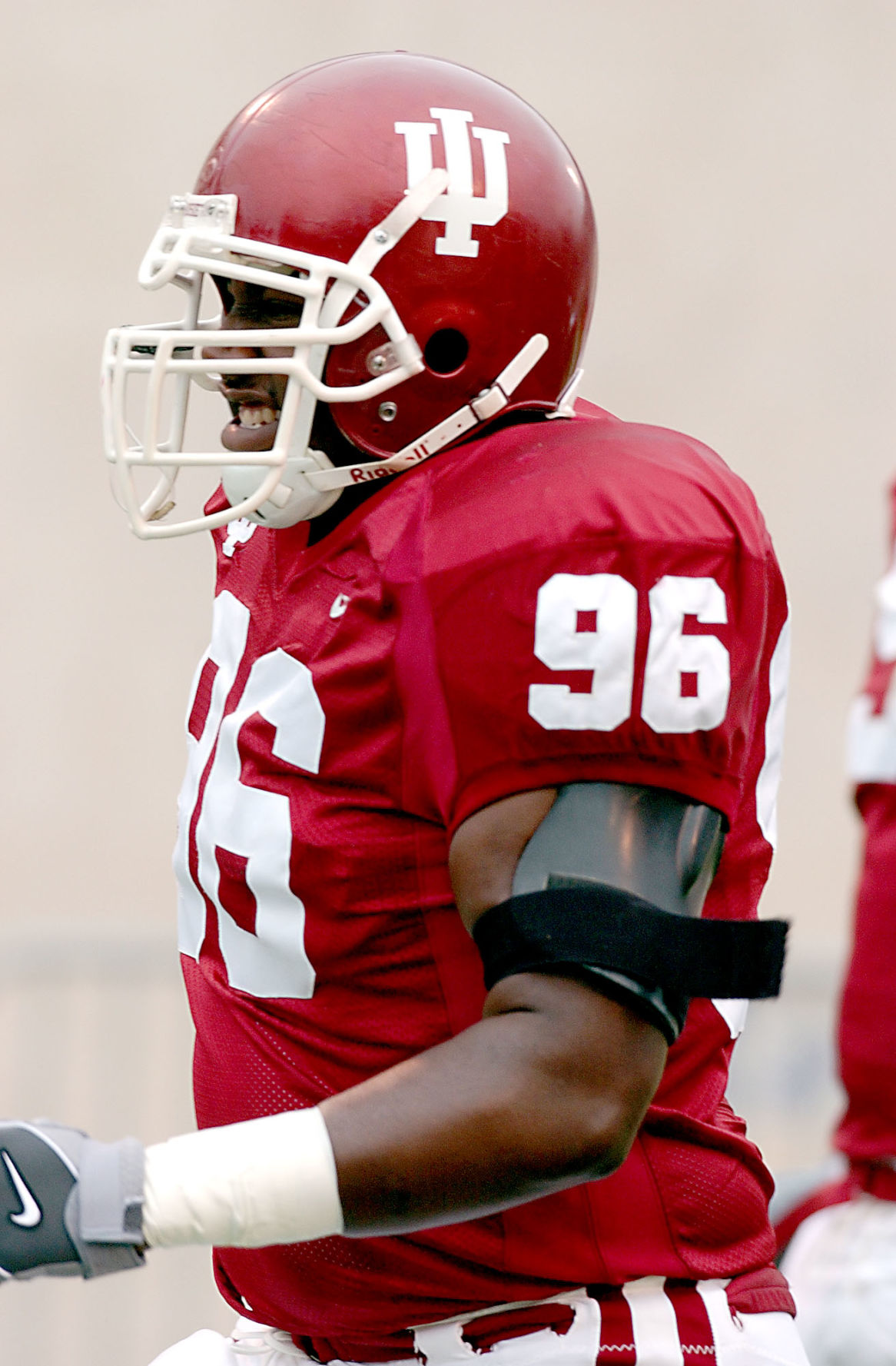 Former Indiana defensive lineman Chris Beaty works during a practice at Memorial Stadium. Beaty, a former Cathedral star, played for the Hoosiers from 2000-04. The 38-year-old was shot and killed last summer in downtown Indianapolis.

A mourner signs a tribute wall during a memorial service for former Indiana University football player Chris Beaty on June 12, 2020, in Indianapolis.

Former Indiana defensive lineman Chris Beaty works during a practice at Memorial Stadium. Beaty, a former Cathedral star, played for the Hoosiers from 2000-04. The 38-year-old was shot and killed last summer in downtown Indianapolis.

Around Indianapolis, Chris Beaty was known as the man with thousands of contacts on his iPhone.

Need a ticket to a Colts or a Pacers game? Chris was your guy. Planning an event? Chris could get you in touch with everyone, from the caterers to D.J.’s to sponsors to the tent suppliers.

Beaty’s death, a year ago this weekend, is still hard to process for those who knew him best. The former Indiana University defensive lineman was gunned down in an alley in a senseless crime amid racial tensions in downtown Indianapolis. Beaty was checking on businesses on the night of May 30, 2020, during the protests of George Floyd’s death when he was murdered shortly before midnight at age 38. A suspect, 23-year-old Marcus Jayon Anderson, was charged in the shooting last December.

James Waldon, an Indianapolis entrepreneur and local D.J., was one of Beaty’s best friends, who talked to him daily up to the night of his death.

“It’s honestly just a surreal experience to lose somebody that close to you,” Waldon said. “I’m still kind of in a little bit of shock that it even happened and how it happened and the circumstances at which it occurred. So I’d give up anything just for one minute to just talk to him and tell him some stuff and hear his voice. I can’t quantify how much I miss him.”

Waldon first met Beaty at a lake party in Geist in 1999, when both were teenagers.

“I was one of the only Black guys there, and he was, too, and I saw him, and he had a big Gap hoodie on, and I was kind of walking on eggshells a little bit,” Waldon said. “I had never been out there before, and he just looked so comfortable, and he was just laughing and smiling, and he had this big terrycloth Gap hoodie on because that was popular back then, a terrycloth Gap hoodie, and I had the exact hoodie, and it was just hilarious.”

Waldon and Beaty went to IU together, and the two reconnected when he moved back from New York to Indianapolis 10 years ago. Having a friend like Beaty, Waldon said, opened doors. Waldon recalled desperately needing a D.J. gig when he returned to Indianapolis and Beaty planning an event for him.

“He was in the know,” Waldon said. “If you went somewhere nice, he was there. If there was a big event that was cool and there were scores of beautiful people, Chris was in the middle of it. He knew everyone. He’s at a Pacer game. He’s at a Colts game. Next thing you know he’s (got) floor seats. Next thing you know he’s on the golf course, or he’s on the field at a football game, just everybody knew him. He was quintessential Indianapolis.”

Indianapolis Colts broadcaster Larra Overton first met Beaty when the two were athletes at IU. Overton ran for IU’s cross country team. The two reconnected when Overton moved from Louisville back to Indianapolis.

“Chris was one of those that you meet and you instantly felt a connection with, and you definitely did not forget, and he never forgot you,” Overton said. “So if you saw him once, certainly, weight room, crossing paths, when you are making your way through Assembly Hall, crossing over one place or another or game days and different things, too. He always made such an effort to say hi, to ask how you were, to catch up.”

As Overton progressed in her sports television career, she said Beaty was one of her biggest supporters.

“Chris radiated a genuine enthusiasm for life, for the people he was around, for making Indianapolis better, for making people better,” Overton said. “The enthusiasm he had for his businesses and all of the pursuits that he had, his enthusiasm for his family, that’s what I think so many people felt and gravitated toward, and it was something that you felt so good. You felt so genuine.”

Former IU defensive back Brandon Mosley first met Beaty when he hosted him on his official visit. Mosely said Beaty kept tabs on him throughout his IU career, and the two remained friends as Mosley entered the real estate business in Indianapolis.

“Chris loved the city,” Mosley said. “He grew up, he did everything he could to get involved with everyone in the city, whether it’s NBA with the Pacers, NFL with the Colts, Indy 500 with the IndyCar drivers.

“He was always looking to do something to help his city and shorten the curve for the less fortunate, and people that did not have access to these type of games and, you know, atmospheres. I would have probably never went to as many IndyCar races, Indy 500 races or Pacers games or Colts games without Chris.”

Mosley said Beaty’s love and support of the Hoosiers remained strong as well. Beaty, who grew up in Indianapolis and was a star at Cathedral, played at IU from 2000-03.

“Chris did everything he could to support the program, attend games, attend coaches meetings and just try to stay proactive and try to help wherever he could,” Mosely said. “Just mentoring existing players or just being a voice of support for Indiana University.”

In April, IU endowed a scholarship in honor of Beaty. Made possible through a $100,000 gift directed by Beaty’s mother, Debra Cooper, it will be given annually to an IU football student-athlete from the state of Indiana — with preference given for a student who began his career as a walk-on.

“You want for the players to get to know him and to never forget and to be able to galvanize his legacy because he was special,” IU football coach Tom Allen said. “He really was, and you talk to the individuals that knew him in high school and the same things were said about him. He was just such an unbelievable — he had such a great spirit about him. He loved the people that he was around and the organizations that he was a part of.”

Beaty’s gift in connecting with others, friends say, will be his enduring legacy.

“I can hear his laugh, his big smile and his big laugh and just being a good person and a good spirit and a big happy teddy bear to hug, you know what I mean?” Waldon said. “I think people miss that. His legacy is making people feel better about themselves in their efforts, in what they are trying to accomplish He was extraordinary at that. That’s what people definitely will hang onto and remember about him.”