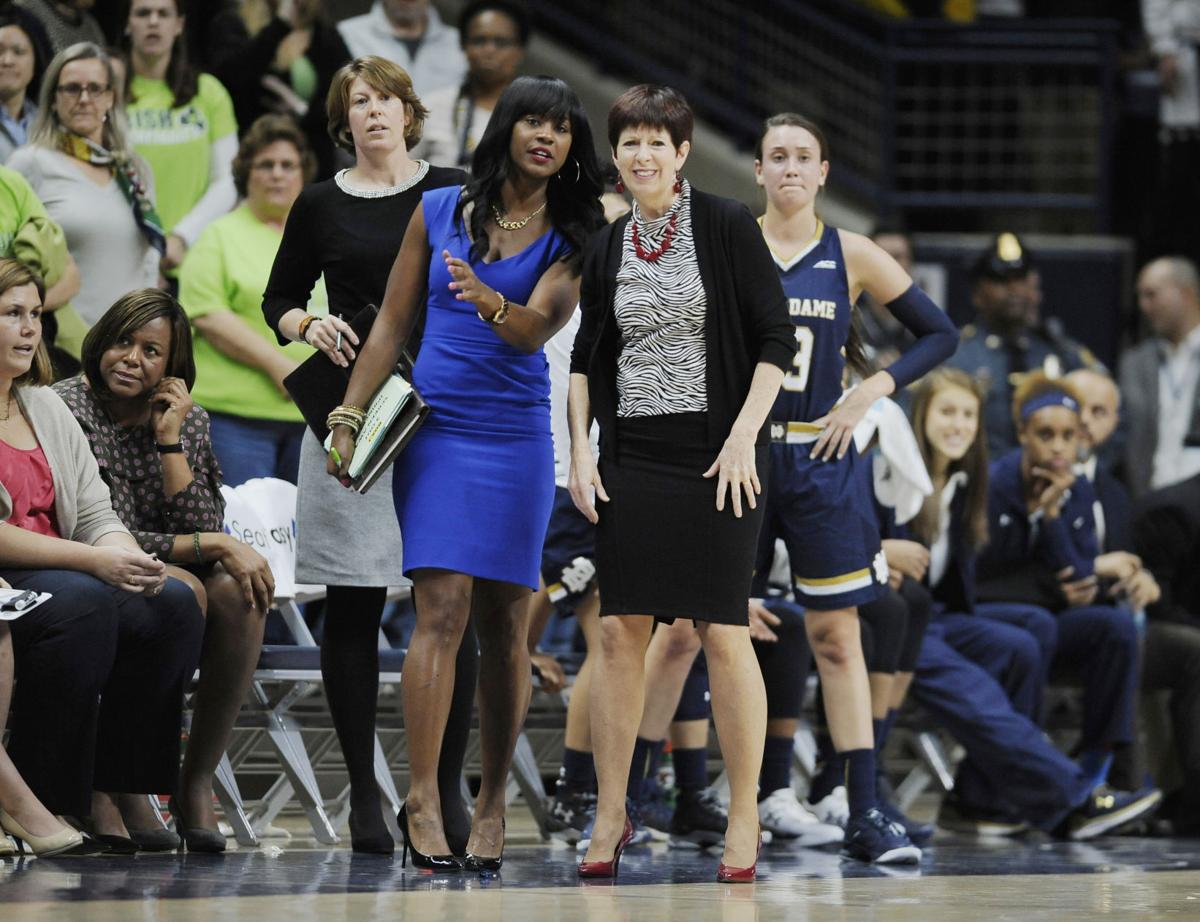 Notre Dame associate coach Niele Ivey, foreground left, and head coach Muffet McGraw watch during the first half against UConn in Storrs, Conn., on Dec. 5, 2015. Ivey was introduced as the Fighting Irish’s head coach Thursday, replacing McGraw, who has retired. 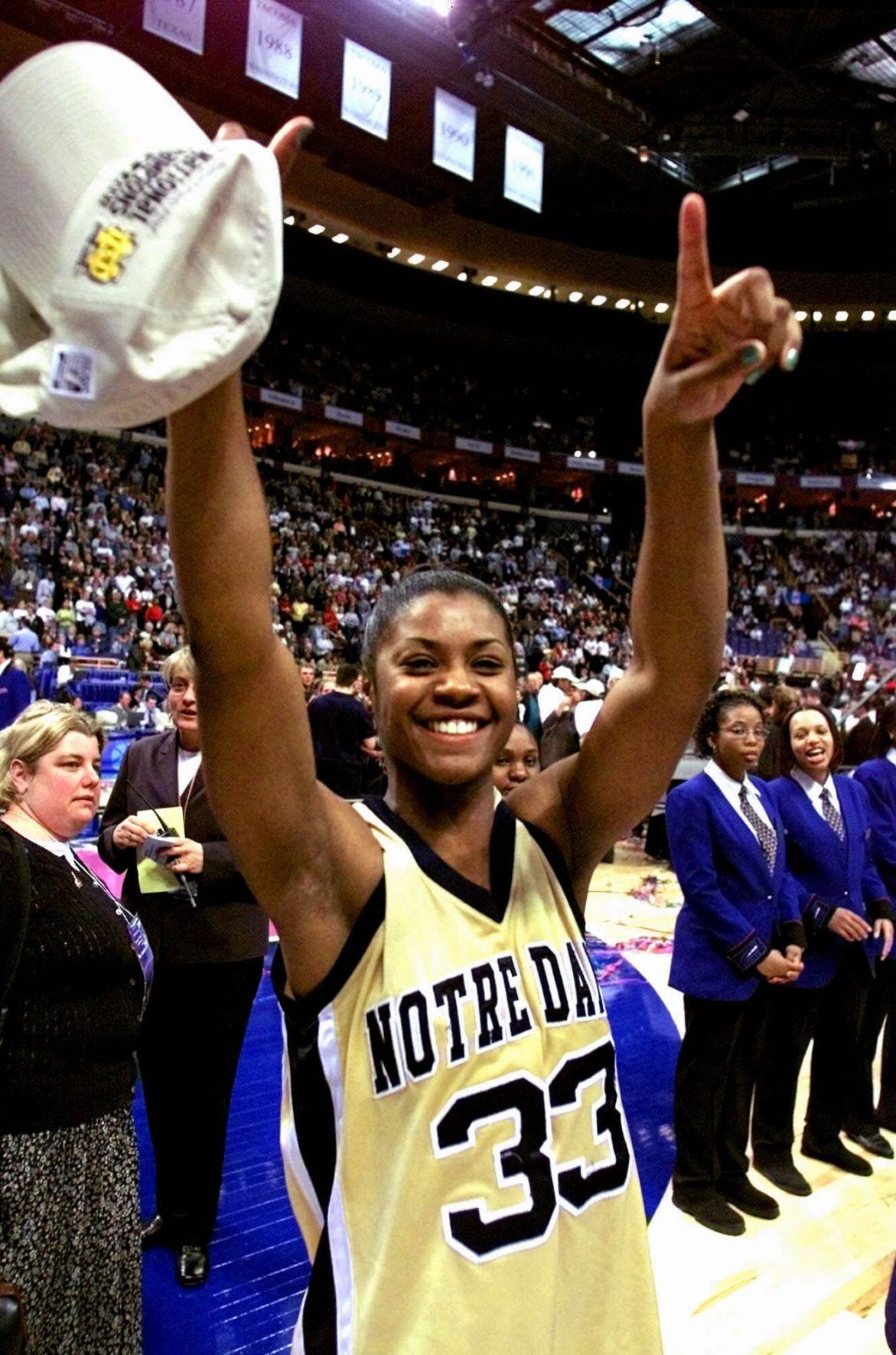 Notre Dame associate coach Niele Ivey, foreground left, and head coach Muffet McGraw watch during the first half against UConn in Storrs, Conn., on Dec. 5, 2015. Ivey was introduced as the Fighting Irish’s head coach Thursday, replacing McGraw, who has retired.

SOUTH BEND — After one year away from Notre Dame women’s basketball, former Irish player and assistant coach Niele Ivey is returning as the leader of the program.

Ivey has been chosen to replace legendary coach Muffet McGraw, who announced her retirement Wednesday afternoon after 33 years at the Irish helm.

“I am so honored to be able to follow in the legacy that Coach McGraw built here at Notre Dame,” Ivey said in a press release on the school’s website. “My love and appreciation for Coach McGraw is beyond anything I can express. She’s more than a mentor, more than a friend. She’s one of the most influential people in my life.

“I am full of gratitude for Coach McGraw and what she has done for me. She was the first to give me an opportunity to play for Notre Dame and coach here as well. I will forever be grateful for her love and support. I would also like to thank (Notre Dame athletic director) Jack Swarbrick and (university president) Father (John I.) Jenkins for having the faith to move this program forward with me. I can never thank you enough for this incredible opportunity.”

While the term “Coach in Waiting” was never used, Swarbrick confirmed Ivey was tabbed as McGraw’s successor two years ago.

“Once the season was over, I would always sit down with Muffet to discuss the season,” he said. “One of the questions that were always asked was, ‘If for some reason you are not back for next season, who would you want to succeed you?’ The only answer Muffet ever gave me was ‘Niele Ivey.’

“So as long as Niele was interested, she was going to be the next coach. For all practical purposes, Niele became the next Notre Dame coach the first time Muffet handed her the basketball as the ND point guard.”

Even though Ivey was aware of the situation, she was not expecting the call.

“I was shocked when Jack called and offered me the job,” Ivey said. “You can never really prepare for something of this magnitude. It’s my dream job. It’s the opportunity of a lifetime. Accepting the job was a no-brainer.”

Ivey’s son Jaden, who is a Purdue basketball recruit, sat next to his mother during Thursday’s press conference. He was wearing a Gold No. 33 ND jersey his mother wore during the 2001 Irish season. It was the same jersey Niele wore in the team’s win over Connecticut in the first women’s basketball sellout and in the national championship win over the Boilermakers.

Niele Ivey was the common link to all nine of the program’s Final Four appearances — two as a player and seven as an assistant coach — logging a combined 17 years on Notre Dame’s campus. Ivey spent the past season honing her craft as an assistant coach with the Memphis Grizzlies before returning to follow in McGraw’s footsteps.

“I am thrilled Niele will be the next leader of the Notre Dame basketball program,” McGraw said. “She’s one of the best young coaches in the game today, and her success with the Grizzlies has helped make her even more prepared for her new role.

“What sets Niele apart is her ability to connect with all generations — alums, her current team and future student-athletes. She will be a fantastic role model and a leader in the women’s empowerment movement, and she will represent Notre Dame in a way that will make our fans proud.”

Swarbrick feels good about the year Ivey spent as an assistant for the Grizzlies.

“It was never a question if she would become the ND head coach, the question was could we hold on to her,” Swarbrick said. “Still the offer to work for the Grizzlies was too good for her to turn down.”

Taylor Jenkins was a first-year coach for the Grizzlies last season.

“I’m so excited for Niele and this wonderful opportunity to return to her alma mater, where she spent so many years as a player and as a coach,” Jenkins said in a statement on the Grizzlies’ website. “Niele is going to make a huge impact in the lives of the women who come through the Notre Dame program, both as players and people, because that’s who she is — a difference-maker in so many respects.”

In her playing days, Ivey was an All-American point guard and three-time All-Big East selection, going 109-22 in an Irish uniform and capping her collegiate playing career with a title run in 2001.

Ivey went on to play five seasons in the WNBA after her selection by the Indiana Fever in the second round of the 2001 draft.

She spent four seasons with the Fever, helping them to their first playoff berth in franchise history in 2002.

Ivey will be the fourth coach in program history. Sharon Petro coached the first three seasons (1977-80), posting a 49-20 record and Mary DiStanislao the next seven (1980-87), compiling a mark of 115-79 before McGraw arrived on the South Bend campus.