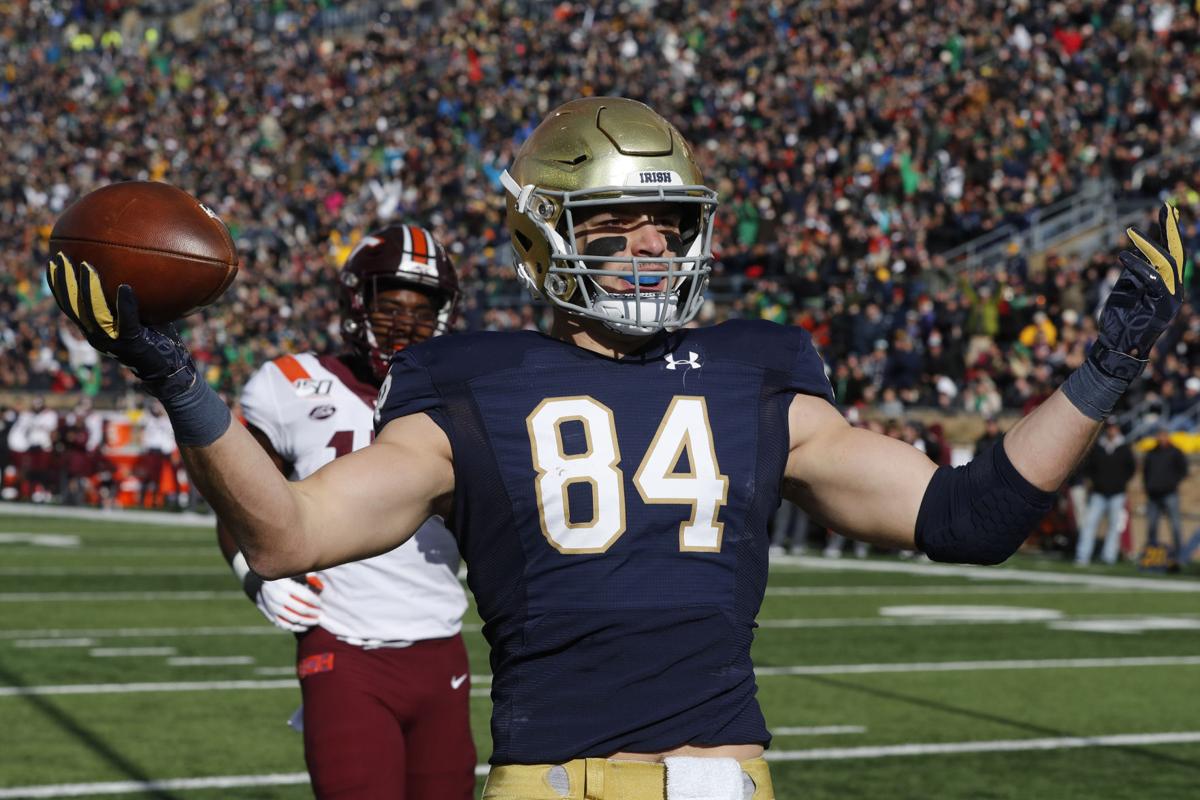 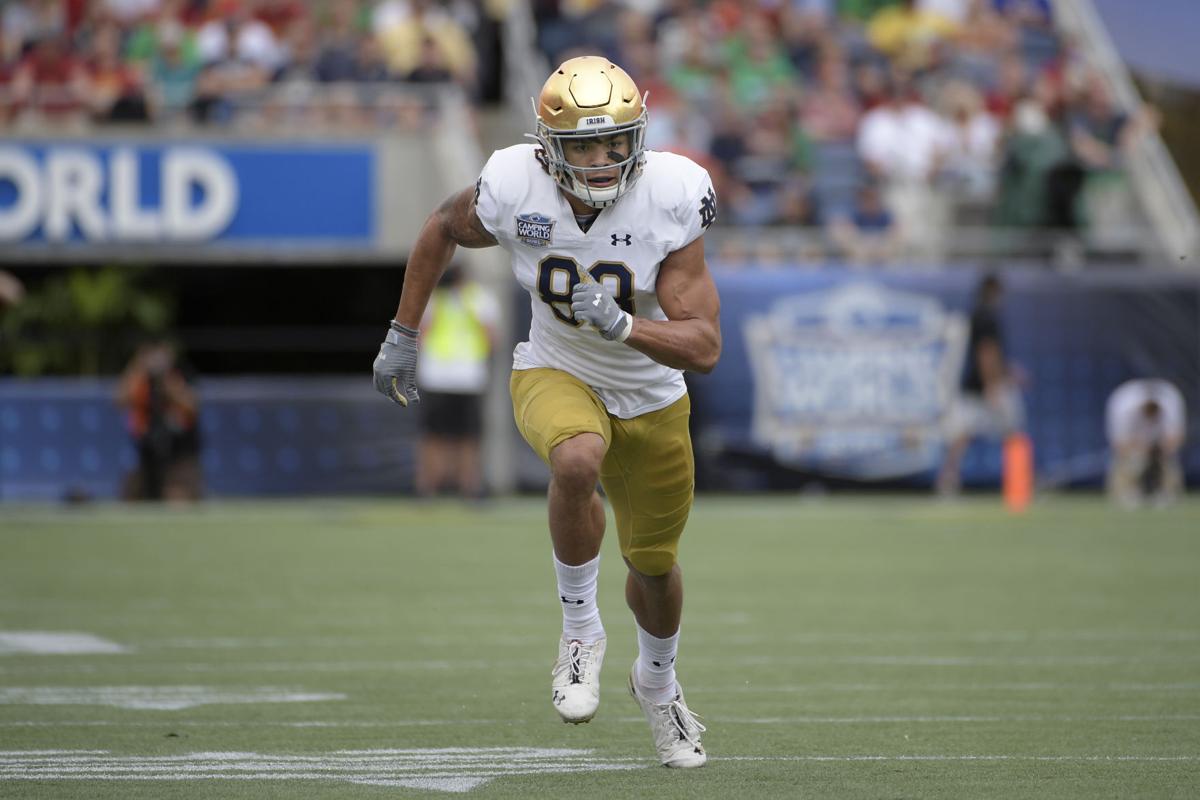 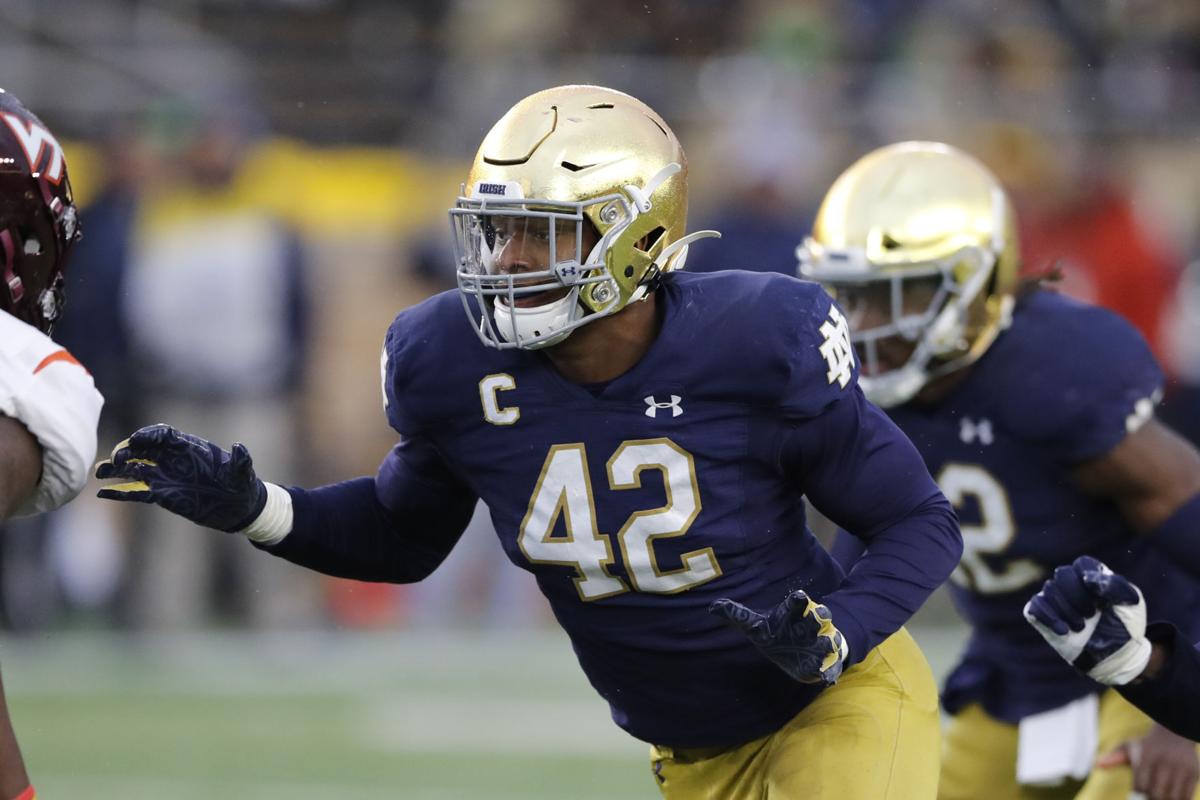 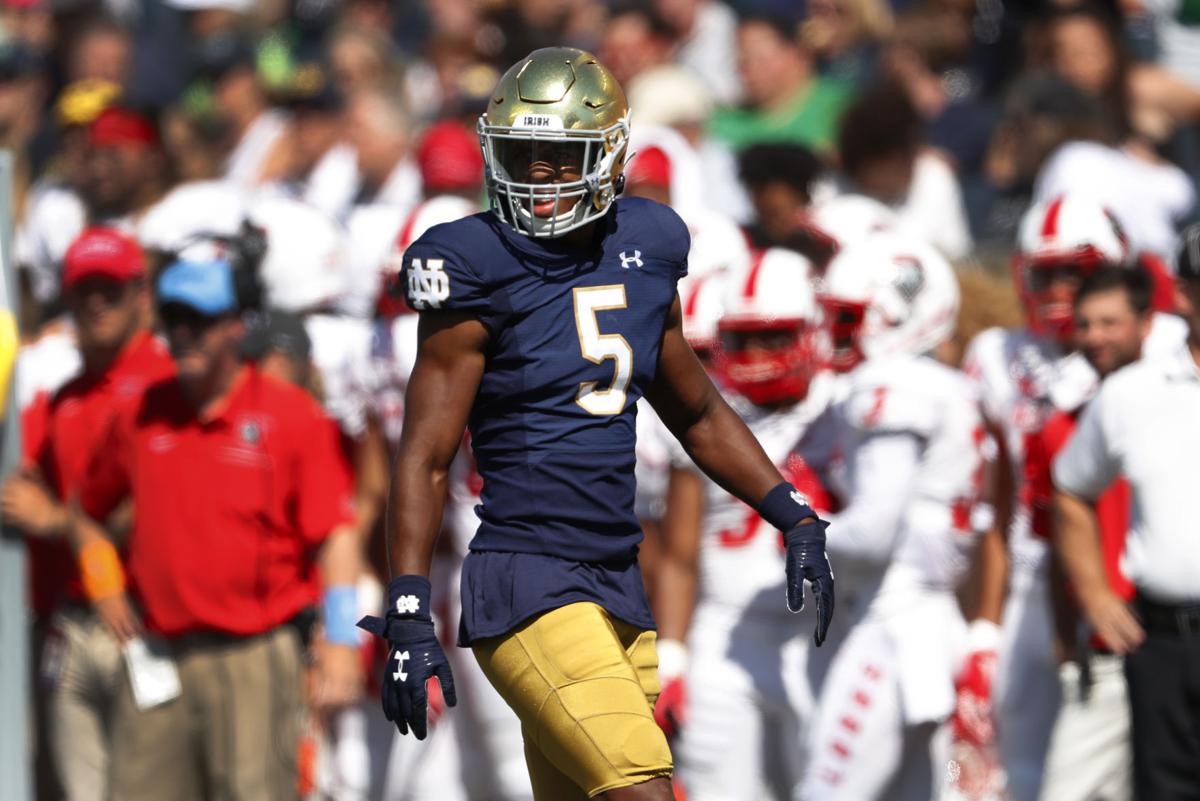 Notre Dame cornerback Troy Pride was the first Irish player drafted on Day 3 of the NFL Draft, going in the fourth round, 113th overall, to the Carolina Panthers. 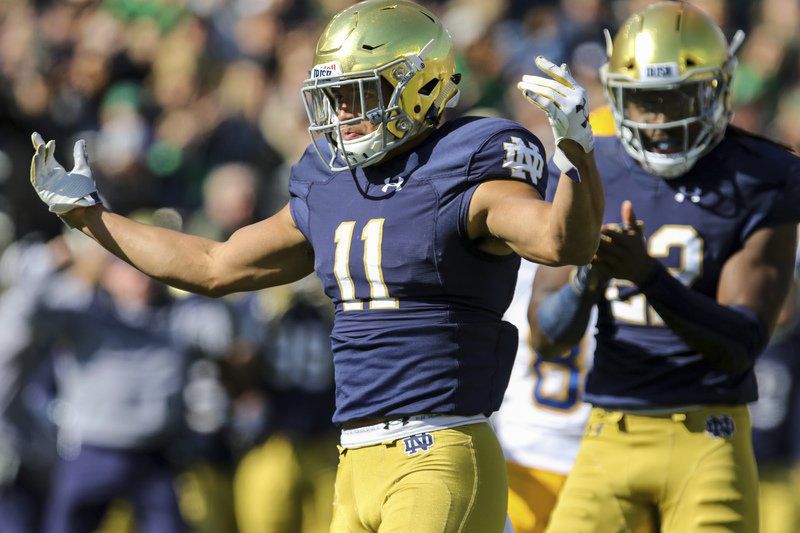 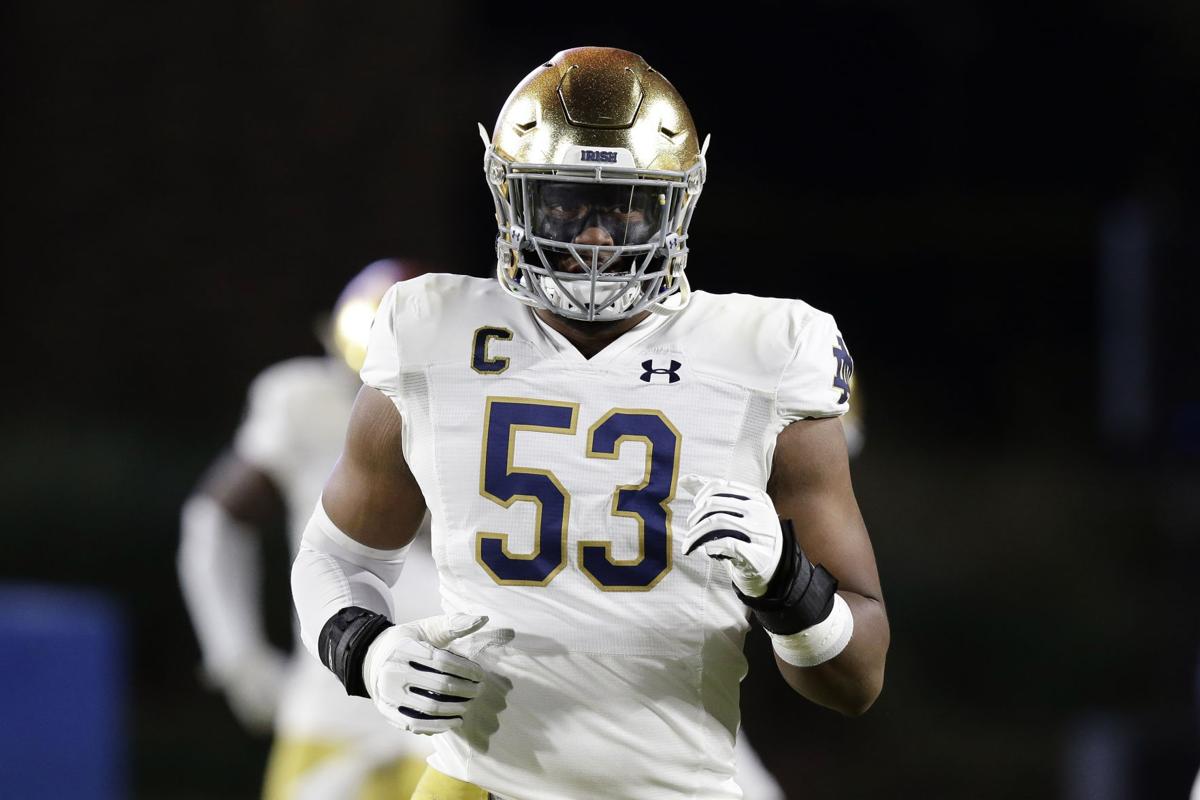 Notre Dame cornerback Troy Pride was the first Irish player drafted on Day 3 of the NFL Draft, going in the fourth round, 113th overall, to the Carolina Panthers.

SOUTH BEND — When the dust settled from this weekend’s NFL Draft, 12 former Notre Dame players had NFL contracts. Six of them were drafted, while the other six signed as undrafted free agents.

The top Fighting Irish player taken was tight end Cole Kmet, who went in the second round, 43rd overall, to the Chicago Bears. Kmet is from the Chicago suburb of Lake Barrington, Illinois, and grew up a Bears fan, so this will be a homecoming of sorts for the tight end.

Reaction to the Kmet pick was mixed, mostly because of the Bears’ plethora of tight ends on the roster. Kmet became the 10th tight end on the roster as of Friday night, including former Pro Bowler Jimmy Graham. The Bears released tight end Dax Raymond on Monday.

“They would’ve not drafted Cole Kmet if he was their 10th tight end,” Kelly said. “You don’t make those kinds of investments unless you know what you’re getting, and what they’re getting is an athletic tight end who’s going to impact their offense immediately.

“… Having a lot of tight ends on your roster is one thing. Having Cole Kmet? That’s another.”

Six picks after Kmet was drafted, wide receiver Chase Claypool was selected by the Pittsburgh Steelers. The 6-foot-4 wideout is expected to compete for a starting job opposite Steelers wide receiver JuJu Smith-Schuster.

Claypool’s versatility is what makes him a serious threat in the NFL, according to Kelly.

“He has some unique physical traits,” Kelly said. “Everybody’s looking for traits, and the traits for him are his size and length and catching radius. He can go up and catch the football and crate mismatches. … He’s got an incredible drive and competitiveness that separates him amongst many.”

One of the top sentimental moments of this year’s draft was defensive end Julian Okwara being selected in the third round, 67th overall, by the Detroit Lions. This means, for the first time since before high school, Julian will get to play on the same team as his older brother, Romeo. Like Julian, Romeo plays on the defensive line. Romeo has been a member of the Lions for the past two seasons.

Both Julian and Romeo played under Kelly at Notre Dame, so he’s been able to see their relationship first hand. Kelly doesn’t compare it to normal brother relationships.

“It’s not your typical rivalry in the sense of a sibling rivalry,” Kelly said. “They’ve always been very supportive. When Romeo comes around, Julian is, obviously, very excited to see him. But Romeo has never been that guy that’s given advice.

“He kind of stays back and has always let Julian be who he is. I’ve always appreciated that.”

Cornerback Troy Pride was the first Irish player drafted on Day 3, going in the fourth round, 113th overall, to the Carolina Panthers. Pride was one of seven defensive players drafted by Carolina under new head coach Matt Rhule.

Pride is an athletic player who also shined on the Notre Dame track team. Kelly believes Pride is only growing as a player, which makes him a valuable pick.

“Troy Pride, a lot of his evaluations were based upon his speed and his athletic ability,” Kelly said. “You’re looking at Troy Pride and saying, ‘Here’s a guy that has incredible athletic ability. Let’s get him in a position to make plays.’

“… I think Troy is a guy that’s just starting to scratch his potential and where he can be as a player.”

Defensive end Khalid Kareem was the first pick of the fifth round, 147th overall, to the Cincinnati Bengals. Kareem joins a rebuilding team, headlined by No. 1 overall pick Joe Burrow.

“He’s going to be a guy that plays in this league a while because he knows how to play the game.”

It wouldn’t be an NFL Draft without the Los Angeles Chargers taking a Notre Dame player.

On top of that, the Chargers signed two other Irish players as undrafted free agents this year in linebacker Asmar Bilal and cornerback Donte Vaughn. That leaves six former Notre Dame players on the current Chargers roster.

“(Chargers general manager Tom) Telesco, obviously, has been great at evaluating our players,” Kelly said. “Kevin Kelly, the lead scout — obviously, their entire organization feels as though our players have developed in a manner.

“… Certainly, we want to continue producing great young men that can be great Chargers for them as well.”