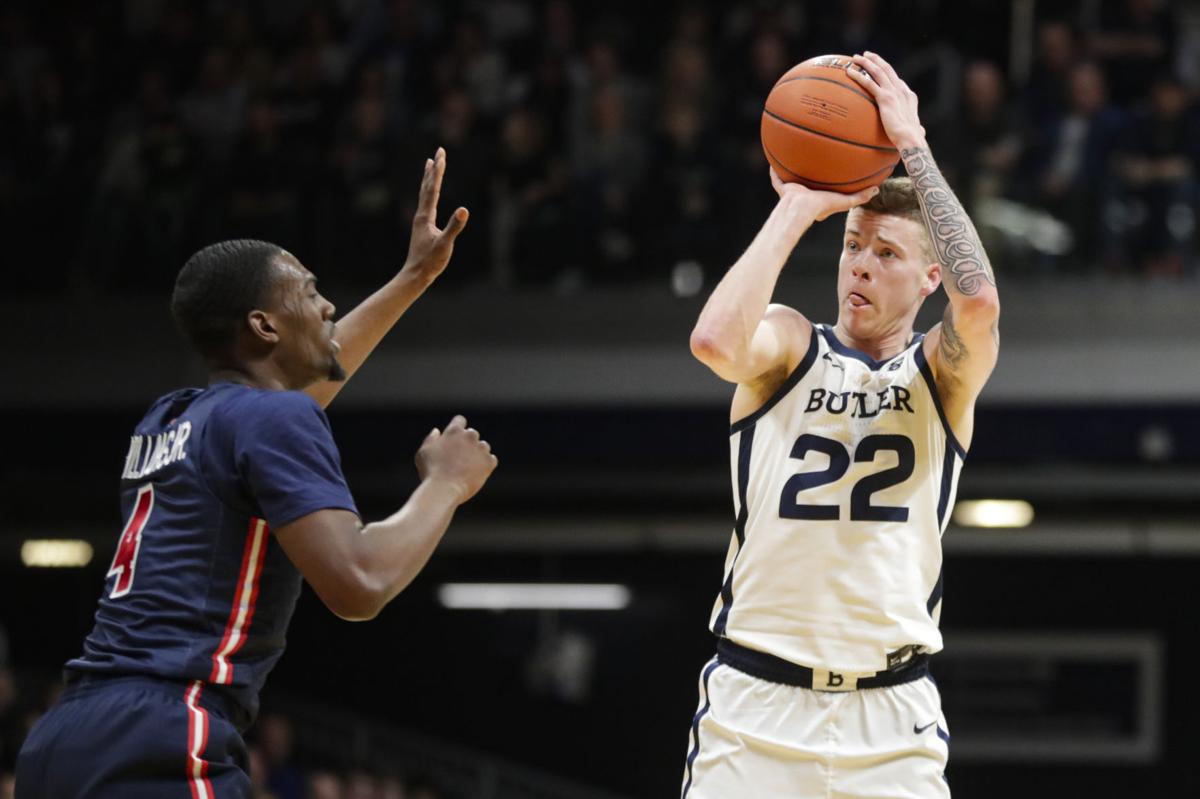 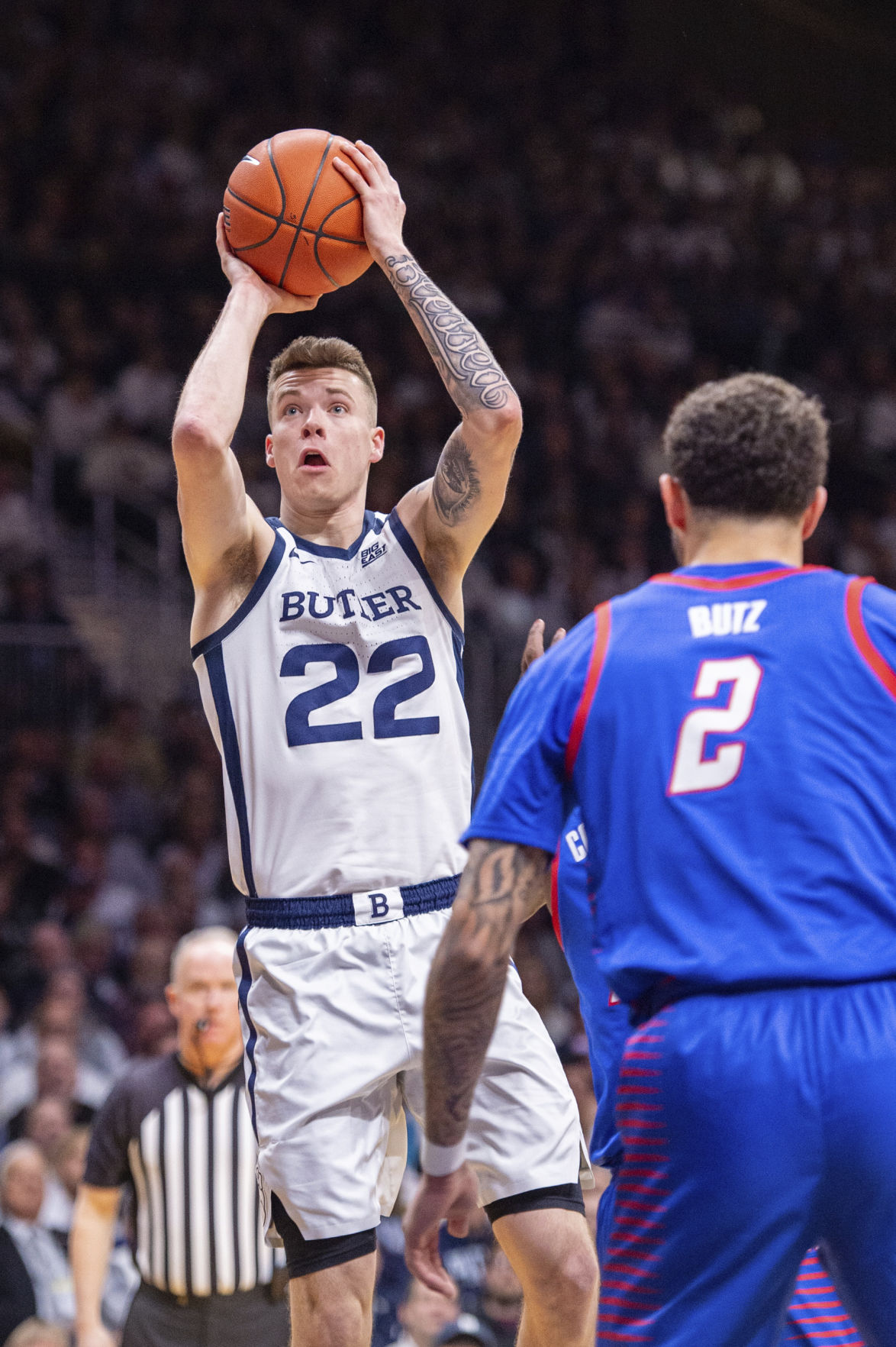 Butler forward Sean McDermott shoots during the first half Feb. 29 against DePaul at Hinkle Fieldhouse.

Butler forward Sean McDermott shoots during the first half Feb. 29 against DePaul at Hinkle Fieldhouse.

ANDERSON — Thursday would have marked the start of play for the Sweet 16 if the NCAA men’s basketball tournament had proceeded as planned, a fact that has not escaped former Pendleton Heights star Sean McDermott.

His Butler Bulldogs appeared poised to make another run this March. Kamar Baldwin was making late-game heroics routine, and a team that reached as high as the No. 5 ranking nationally was rounding back into form.

Butler won its final three regular season games and felt good about its next nine — a stretch that would have taken it through the Big East championship game all the way to the national finals.

Whether the Bulldogs could have made another March Madness run that would have captured the nation’s attention will forever remain in the realm of “What if?”

“It plays pretty heavy on your mind right now, especially with nothing going on,” McDermott said during a cellphone interview Wednesday. “It’s a little different if you play in the first two rounds and lose. … What could we have accomplished if given a chance?”

McDermott has a unique perspective on that eternal question.

There was a time when it looked extremely likely he would never play college basketball at all.

During the summer before his junior season at Pendleton Heights, McDermott was stricken with a staph infection so invasive he was rushed to an Indianapolis hospital for immediate treatment.

In the days and weeks that followed, there were significant questions about whether he’d ever play the game again while far worse outcomes could not be ruled out.

But he attacked the challenge with intense faith, an unrelenting work ethic to match and a level of positivity beyond his years.

It runs in the family. His mother, Kim — a mentor to a generation of basketball talent in Madison County — won a battle against cancer during McDermott’s redshirt freshman season with Butler.

He’s immortalized that victory with a tattoo on his arm and through his own perseverance and determination.

McDermott returned for the latter portion of his junior year with the Arabians and played a starring role in a loss against a strong Richmond team in the sectional final. A year later, he was named an Indiana All-Star and headed off to Butler.

The ordeal taught him some invaluable life lessons and brought him closer in his relationship to God.

“Every day is not promised,” McDermott said. “Doing what you love’s not promised. … It made me realize, if I wanted to be great, I had to put as much time in as possible.”

It’s a lesson he’s still living out every day.

McDermott admits it took him a couple of years to feel like he belonged at Butler. After his redshirt season, he played sparingly as a freshman, making just one start and averaging 2.3 points in 10.7 minutes per game.

But he never stopped working. He was in the gym at all available hours and spent his summers, in part, working with former Pendleton Heights boys basketball coach Brian Hahn to improve his strength and fundamentals.

He averaged 7.5 points and shot 43.1% from 3-point range while making 14 starts as a sophomore, then became a regular starter as a junior.

In the last two years, McDermott left his mark on the Butler program. He started all 64 games in that span and averaged a career-high 11.7 points as a senior — carving out a legacy for himself as one of the Bulldogs’ hardest workers and leaders.

Now he’s taking the same energy into an uncertain offseason.

McDermott said he’ll soon hire an agent and get to work trying to catch the attention of the NBA. He knows he’s unlikely to be drafted, and restrictions associated with slowing the spread of the coronavirus make it unclear when or if NBA teams will hold draft workouts or whether the annual Summer League will be held.

Those are the types of opportunities he’s chasing, and he’ll be ready whenever they come. He’s shooting as often as he can and constantly working on his strength and conditioning.

He’s also following a familiar formula that has served him well.

“I’m focused on going out and outworking the other guys that are in my position,” McDermott said.

He’ll look for professional opportunities wherever they might be found and play the game for as long as he can. But he’s always had an eye on the future.

Coaching also runs in the family.

His grandfather Alan Darner won two state championships at Pike after a successful run as the head coach at Highland. And his uncle Linc Darner is currently the men’s basketball coach at Green Bay.

But McDermott seems more inclined to follow in his mother’s footsteps.

For years, Kim McDermott — a star player in her own right at Highland and Indiana State — ran the basketball program at the Anderson Sports Center. Working with just two courts, she helped teach a generation of players fundamentals, technique and discipline.

It’s hard to find a local player who doesn’t have a kind word to say about how she helped their career. Sean, of course, is no exception.

He believes his success was forged by the ability to access the Sports Center at any time. And he wants to provide similar opportunities for future generations, on a wider scale.

McDermott dreams of opening an academy of some sort in a bigger market, like Indianapolis, and making as broad an impact as possible.

The facility ideally would host “high-level competitive leagues” and give him a chance to work one-on-one with players in intimate settings.

It also would give him a chance to pass that family work ethic and determination on.

He recalls skipping neighborhood wiffle ball games when he was younger and backing out of invitations to parties when he grew older to work on his basketball game.

The reward is a career anyone could be proud of, even if its final collegiate act was stolen away by a global pandemic.

When he looks back on his time at Butler, McDermott will think about the time he spent with his teammates and the work he put in to make it all happen.

He’ll also appreciate how unique and fulfilling the whole experience has been.

“I’m thankful for the chance to play in front of the best fans in the country,” he said, “and, in my opinion, to play for the best program in the country.”

Sports editor George Bremer can be reached at 765-640-4831 or george.bremer@heraldbulletin.com.

Sports editor George Bremer can be reached at 765-640-4831 or george.bremer@heraldbulletin.com.