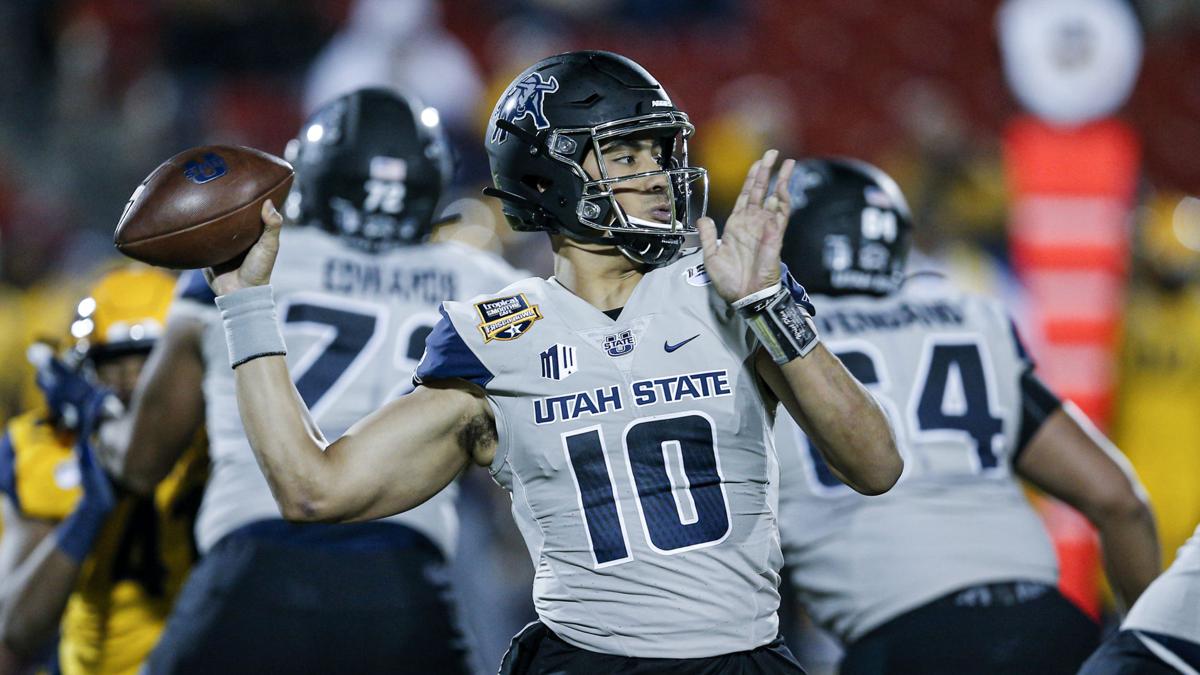 Utah State quarterback Jordan Love (10) looks to pass during the first half Dec. 20 against Kent State in the Frisco Bowl in Frisco, Texas. 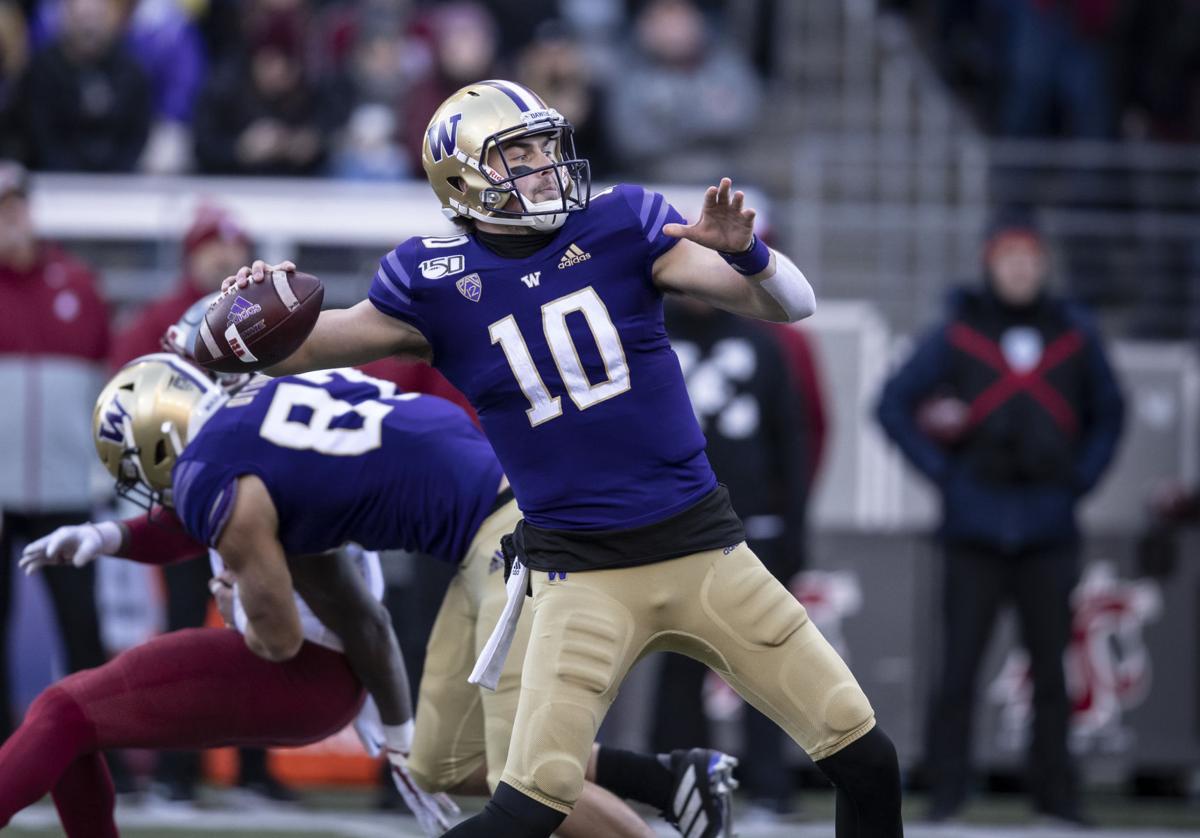 Washington quarterback Jacob Eason passes the ball during the first half Nov. 29 against Washington State in Seattle. 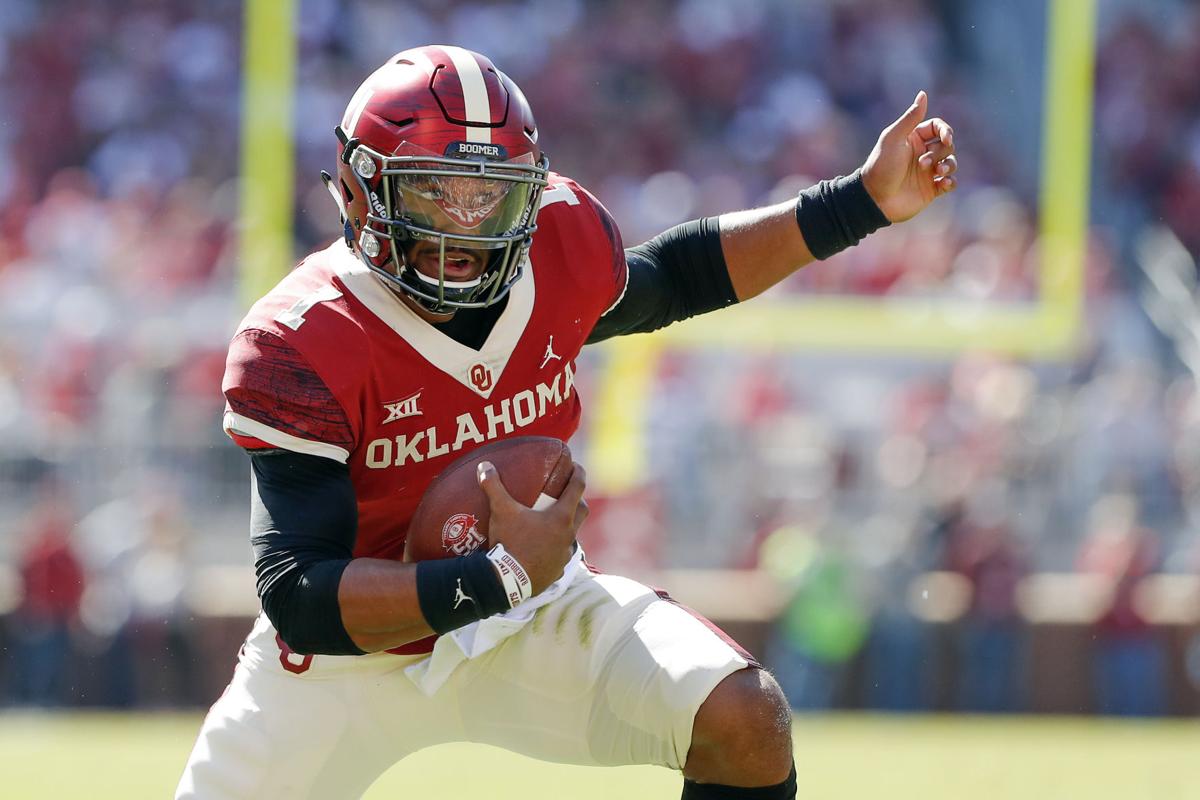 Oklahoma quarterback Jalen Hurts (1) runs against West Virginia during the first half Oct. 19 in Norman, Okla. 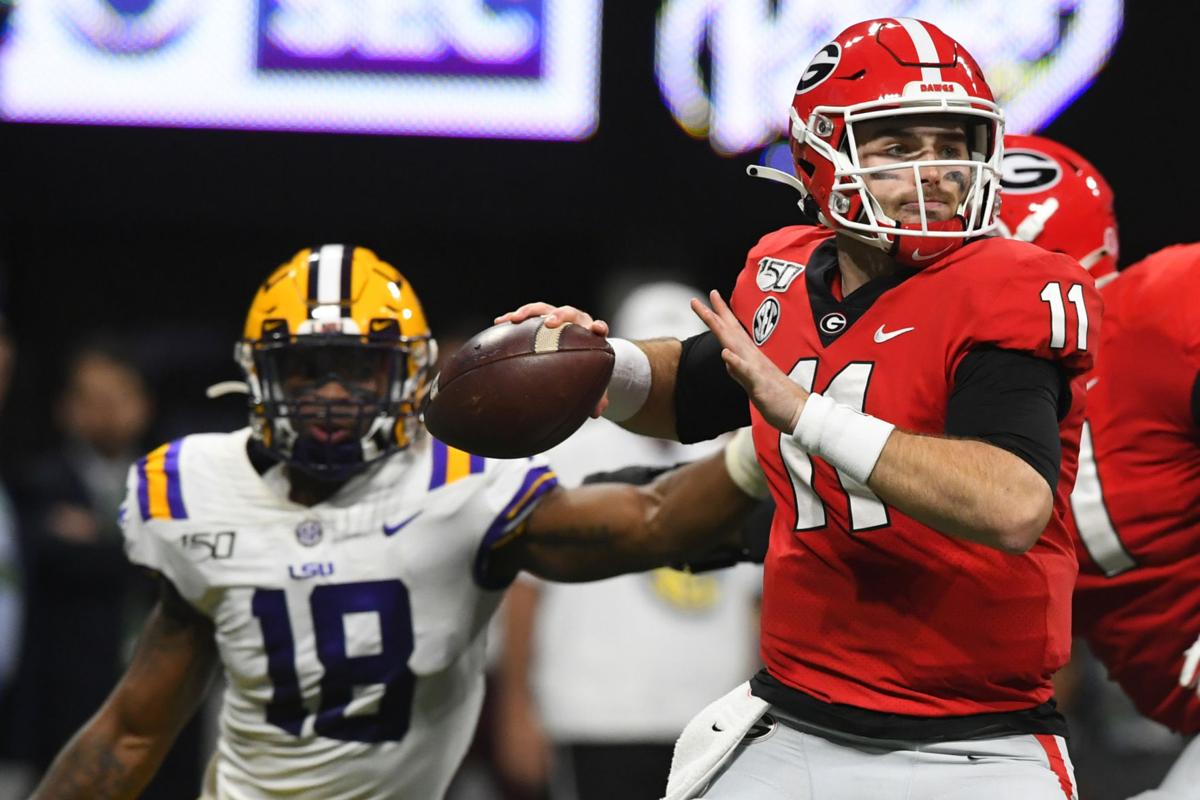 Georgia quarterback Jake Fromm (11) works against LSU during the first half of the Southeastern Conference championship game Dec. 7 in Atlanta.

Utah State quarterback Jordan Love (10) looks to pass during the first half Dec. 20 against Kent State in the Frisco Bowl in Frisco, Texas.

Washington quarterback Jacob Eason passes the ball during the first half Nov. 29 against Washington State in Seattle.

Oklahoma quarterback Jalen Hurts (1) runs against West Virginia during the first half Oct. 19 in Norman, Okla.

Georgia quarterback Jake Fromm (11) works against LSU during the first half of the Southeastern Conference championship game Dec. 7 in Atlanta.

INDIANAPOLIS – The door is wide open at the quarterback position for the Indianapolis Colts this offseason.

But that doesn’t guarantee change is coming immediately.

General manager Chris Ballard and head coach Frank Reich both took care to point out the passing game as a whole needs to improve in 2020, and starting quarterback Jacoby Brissett is just one piece of the puzzle.

The Colts’ braintrust loves the 27-year-old’s intangibles. His natural leadership abilities and innate toughness consistently come up in lists of Brissett’s greatest attributes.

And those qualities very well might buy him another season to see if his on-field performance can catch up.

That doesn’t mean Ballard won’t be looking for an upgrade starting next week at the Senior Bowl in Mobile, Ala. The GM enters his fourth offseason with the franchise faced with the biggest challenge of his tenure.

How will he fill the massive void left by Andrew Luck’s sudden retirement, and how long will it take to get Indianapolis back on the path to Super Bowl contention?

Those answers will begin to unfold in the coming months. But it’s obvious the Colts aren’t ruling out any options yet.

With the knowledge Ballard always prefers building through the draft and the caveat that it’s still extremely early in the process, here is an early take on four realistic options for Indianapolis in late April:

Why it could work: Ballard was known to be interested in the mid-major prospect after his breakout sophomore season, and Love’s upside is obvious. He’s a dual-threat athlete with a big arm, and some scouts see his ceiling as comparable to Kansas City’s Patrick Mahomes or Houston’s Deshaun Watson. With a good showing at the Senior Bowl, he could even put his name back in contention as a first-round pick.

“Jordan Love’s a guy that’s got as much to gain from the Senior Bowl as anybody in our game this year,” Senior Bowl executive director Jim Nagy recently told the Detroit Free Press. “Physically, he has everything. He’s big. He’s athletic. He can move. He’s got a strong arm. He’s a really natural thrower. That’s what gets you excited about him.”

Why the Colts could pass: Love buckled under raised expectations as a junior. The Aggies put together a preseason Heisman Trophy campaign, but he threw just 17 touchdowns against 16 interceptions during the regular season. There are, of course, extenuating circumstances.

His head coach as a sophomore – Matt Wells – left Utah State for Texas Tech last season, and Love had to work with a whole new coaching staff. He also had a host of new teammates at the skill position after heavy losses to graduation. Still, his struggles in 2019 could be enough for the Colts to pass at No. 13. And Love might not be available when the team picks again.

Why it could work: A five-star prospect coming out of high school, Eason has all the physical tools to succeed in the NFL. His deep ball, in particular, draws extensive praise, and he made 12 starts as a true freshman at Georgia.

Why the Colts could pass: Eason has struggled with his mechanics under pressure, and his touch is inconsistent when he’s not looking for big shots downfield. There is a thought in some scouting circles that his on-field performance might never fulfill his vast potential.

Why it could work: Hurts excels at the same intangible qualities Indy so respects in Brissett. He’s a natural leader who led both Alabama and Oklahoma to the College Football Playoff, and he showed during his one season with the Sooners he can put up the passing numbers to match his prodigious rushing ability.

Why the Colts could pass: Despite finishing as the Heisman runner-up and posting numbers very much on par with predecessors Baker Mayfield and Kyler Murray – who were selected with the No. 1 overall pick in the past two drafts – questions remain about Hurts’ arm strength and consistency. He also turned the ball over 14 times (eight interceptions, six fumbles) in 14 games last season.

Why it could work: Scouts rave about Fromm’s natural leadership and high football intelligence. He also proved to be extremely unselfish. Despite having a lot of freedom at the line of scrimmage, he often checked into runs to take advantage of Georgia’s massive offensive line at the sacrifice of his own stats. He also beat out a pair of five-star recruits – Eason and Ohio State’s Justin Fields, who both transferred – to maintain his starting job in consecutive seasons.

Why the Colts could pass: There are concerns about Fromm’s mediocre size (6-foot-2) and arm strength. And, like Love, he followed up a promising sophomore campaign with an inconsistent and disappointing junior season before turning pro.