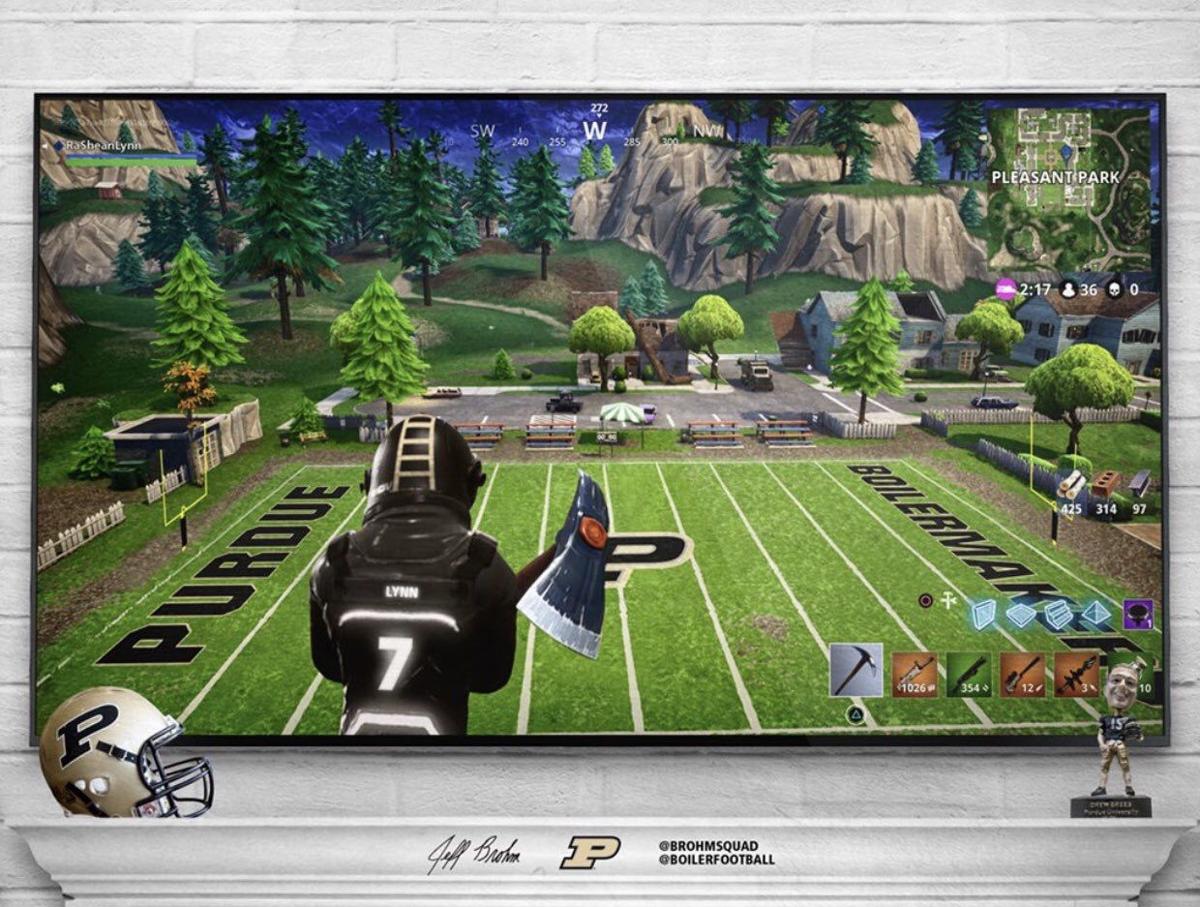 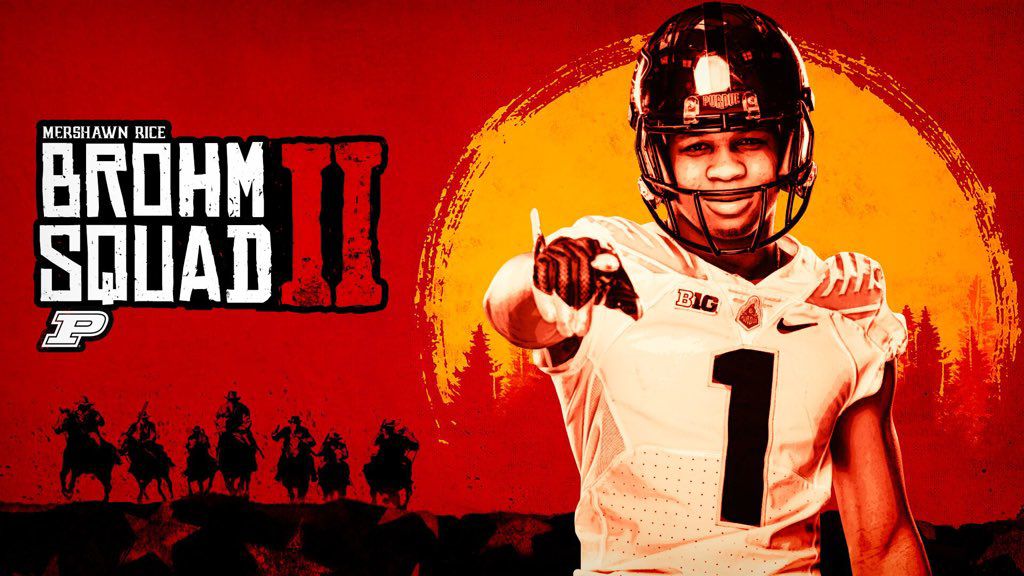 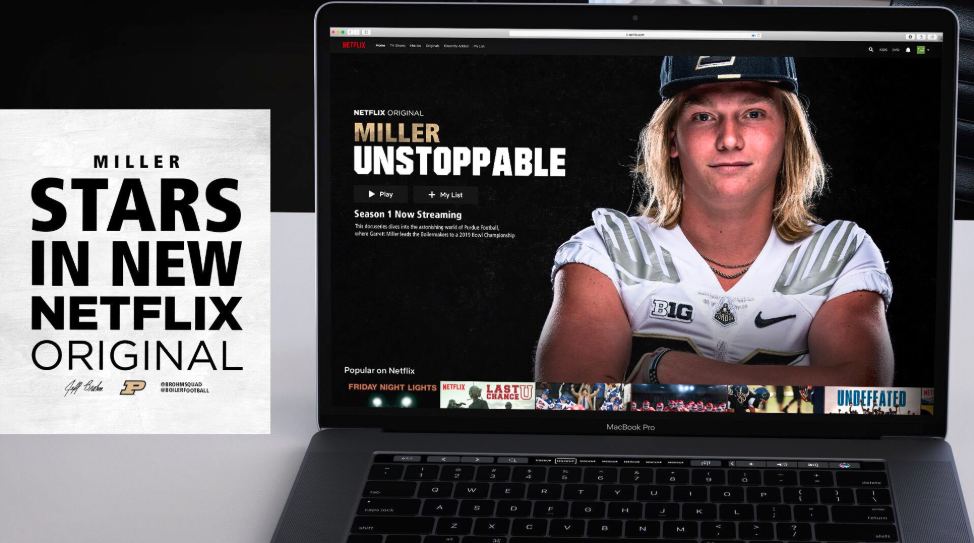 Because of course he doesn’t. The Purdue football coach is, after all, the same blue jeans and sweatshirt-wearing football guy who drives the world’s most famous 2004 Honda Accord and still lists “Rocky” as his favorite movie more than four decades after it debuted in theaters.

But on Wednesday, when the Boilermakers sign their first top-25 recruiting class since 2004, Brohm might want to take a minute to thank the popular video game for the assist. And, while we’re talking about video games, "Red Dead Redemption" had a hand in this class as well. And rappers Meek Mill and Drake, too.

The coach might be old-school, but he and the Boilers' staff have embraced the changing world by employing a creative team of about 10 videographers, photographers and graphic designers to create and distribute graphics and other promotional materials to recruits.

Virtually every team in college football employs a similar recruiting strategy. One thing that’s made Purdue’s efforts so effective is the ability to connect with 15- to 18-year-olds with music, pop culture and video game references.

“You kind of have to play the game,” Brohm said. “You want to get to know players and their families and build relationships. But you’ve got to be visible on social media.”

In one of the more popular designs that circulated on Twitter, the creative team photoshopped a "Fortnite" character to look like a Boilermaker wielding a hammer. When Drake dropped his "Scorpion" album this summer, Purdue played off of his mix tape titled “If you're reading this, it's too late” with the words, “If you’re reading this, Boiler Up!” in the same font. Recently, the team took the "Red Dead Redemption" video game cover and swapped photos of commits for the main character.

If you don't get these references, chances are, you aren't part of the generation the Boilermakers are targeting. To land a GenZ-er, you have to think like GenZ.

“A lot of what we do revolves around making the recruit happy and doing things the recruit is going to like,” said Ashley McCafferty, a graphic designer for Purdue’s football team. “Our goal is to make things the recruit will like enough to post on social media and get the word out about Purdue.”

Of course, a coach with a history of breaking offensive records, a shiny new $65 million football performance complex and a nationally televised upset over then No. 2 Ohio State didn’t hurt Purdue’s recruiting efforts, either.

But in a world where everything has moved online — including recruiting — connecting with a new generation and speaking their language is almost as important as the on-field product.

“We’re kind of all looking at our phone all the time now days,” Brohm said. “We just have to adapt to it.”

FROM VHS TO HUDL

Across the Big Ten — and across the country for that matter — coaching staffs are recognizing kids have changed, and recruiting has to change with it.

“You’ve got to recruit in a cultural way,” Minnesota coach P.J. Fleck said. “You can’t talk about Michael Jordan and Larry Bird anymore. Every day, information has got to change. It’s got to be updated. Because whatever is popular today is old news tomorrow.”

But to understand where recruiting has gone, you have to start with where it began.

Back when Michigan’s 54-year-old head coach Jim Harbaugh was a high school quarterback in the late 1970s and early 1980s, he had one grainy VHS highlight tape.

“I would send it to a school and ask that they send it back,” Harbaugh said. “Then, I’d send it to another school. Sometimes that would take days, weeks, even months before you could get your one copy.”

Now, at any given moment, dozens of coaches can watch the same recruit's highlight reel at the same time with the click of a button.

That’s thanks mainly to Hudl, a Nebraska-based company launched in 2006 to provide game footage for teams. By 2013, Hudl was named one of the 150 fastest-growing private companies in the United States, and in 2016 Fast Company named Hudl one of its Most Innovative Companies.

Today, almost every recruit pins his highlight video to his Twitter profile with his awards and accolades. It’s essentially a resume for the whole college football community to see, providing exposure like never before.

“There were times when you could keep a guy hidden,” Fleck said. “This guy is a hidden gem. Everybody knows about everybody now.”

This transparency is two-sided. Social media can get a player noticed. But the coaches are keeping tabs on more than just their highlights. They can use Twitter to vet potential players and learn more about who they are, what motivates them and more.

“Just by looking at their social media page, you can find out exactly the type of person you’re recruiting,” Fleck said. “It can either springboard a recruit on your board or take him off.”

HOW MUCH IS TOO MUCH?

Kyle Bilodeau, a four-star tight end from Virginia, will be one of the Purdue recruits putting pen to paper Wednesday.

His journey, like so many others, started on Twitter. He followed Purdue’s coaching staff. They followed him back. A direct message later, his path to Purdue was starting to be paved.

“Really before they even talk to you, they can build up a feeling of if they think you’re a possible offerable guy based off of your stars, your film and talking to your coach,” he said. “All that really depends on Twitter.”

The growth of social media has coincided with a booming market for recruiting coverage. It’s created a world where some high school kids have become pseudo celebrities before they are old enough to buy a lottery ticket.

Nolan Smith, the No. 1-rated player in the Class of 2019, has almost 13,000 people following him on his verified Twitter account. Kayvon Thibodeaux, the No. 2 player, has almost 15,000. Some of Purdue’s highest-profile targets like uncommitted receiver David Bell have almost 7,000 followers.

For coaches and fans, this platform has provided a direct and immediate line of communication that didn't exist even a decade ago.

But how much is too much?

“I think there’s a fine line between building a genuine relationship and becoming a creepy adult,” Northwestern coach Pat Fitzgerald said. “I think if you’re texting these kids, ‘Good morning. Have a great lunch. Goodnight sunshine.’ You’ve got problems, man.”

As much as recruiting has evolved to meet the interests of a new generation, the kids are also evolving as a result of the living in a 24/7 world of recruiting.

“Back in the day we wore neck rolls and played the game between the hash marks,” Fitzgerald said. “We were just happy to get to play the game of football. I think there are some kids who enjoy recruiting more than they enjoy football.

“I think that’s a byproduct of this early process. We created it. We’re the ones that made the rules. I think that’s something we have to seriously think about because we’re inflating some egos on kids who are 14, 15, 16 years old.”

The adverse effects of highly publicized, highly competitive and high-profile recruiting can carry over after signing day. During the recruiting process, social media is an essential tool. But to many coaches, once players arrive on campus, it becomes a distraction.

“Coaches always used to talk about the noise,” retiring Ohio State coach Urban Meyer said. “The noise used to be parents. Noise used to be what I used to called the ‘third uncle.’ Now the noise is you walk into a room and everyone is staring at their phone.”

Purdue receivers coach JaMarcus Shephard is a little younger than Brohm, so he gets social media a little more.

He was around during the AOL Instant Messenger craze under the screenname “JammaPhat.” When he was breaking records as a receiver at DePauw in the early 2000s, his school was one of the first to dabble in Facebook back when you needed a university email address to get a profile.

But he’s still old enough to get stumped by online slang (“BTFU … That one got me”) and he’s old enough to echo the most common criticism of the so-called GenZ.

“Now, they want that instant gratification,” Shephard said. “They want the ability to step in a program right away and have an impact. They’re not a group that’s wanting to sit back, relax and see what everybody else is doing and then make their mark. No.”

But rather than just shake his fist at the sky, Shephard and the Boilers are adapting.

“We had a few recruits tell us, ‘You know, what you’re sending us too many pictures of yourselves and coaches,’” Brohm said. “We want pictures of ourselves.”

So Purdue started sending pictures of the players instead, edited so they are wearing Purdue uniforms. The other common criticism of GenZ is they have short attention spans. So at Minnesota, Fleck said he's constantly evolving his tours to show kids something different.

And if they they want instant gratification, they got it.

That was, more or less, the sales pitch to Rondale Moore when Purdue promised him early playing time. True to their word, the Boilers gave Moore his shot and he turned into an All-American.

“He stepped on campus. He’s making a name for himself right away,” Shephard said. “Guess what? For those who I’m recruiting, come on. You can make your mark. You know who you are.”

If that sounds like a sales pitch, maybe it is ... at least to the ones reading this online.