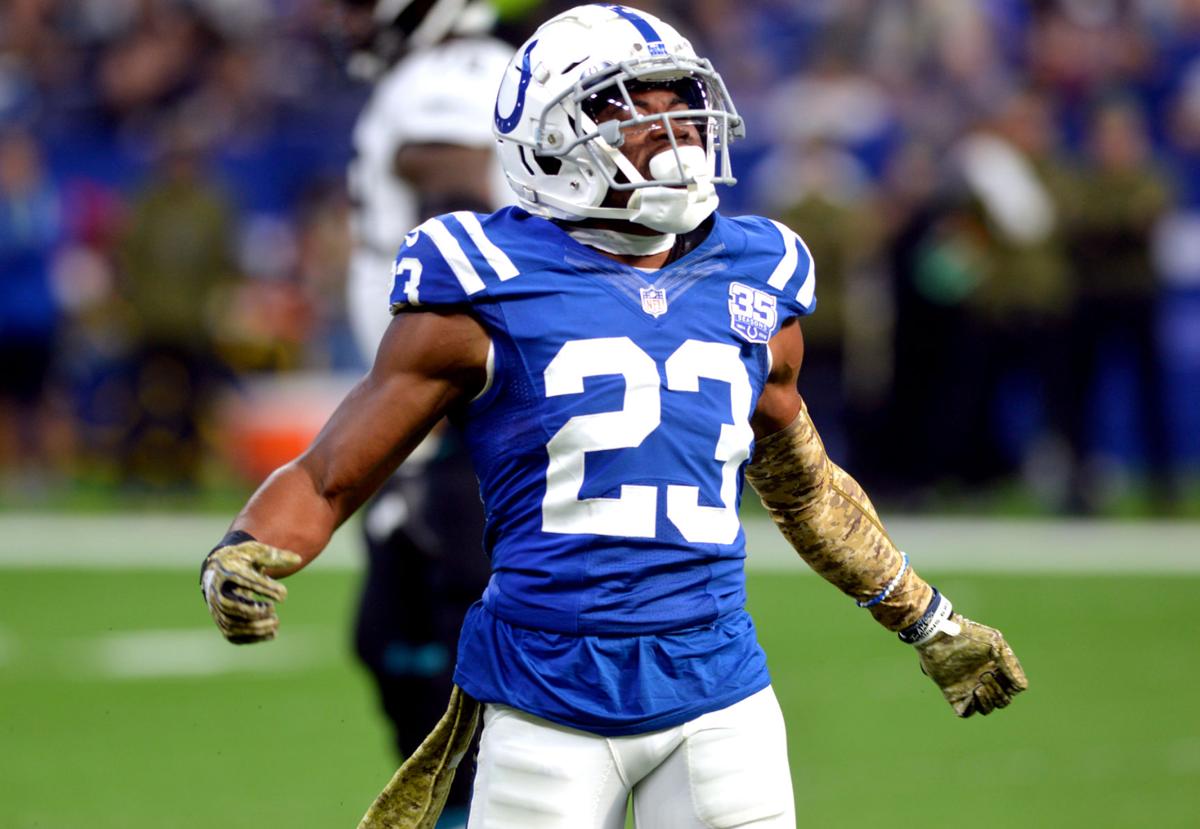 Colts cornerback Kenny Moore II celebrates after coming up with a defensive stop against the Jacksonville Jaguars at Lucas Oil Stadium in 2018. 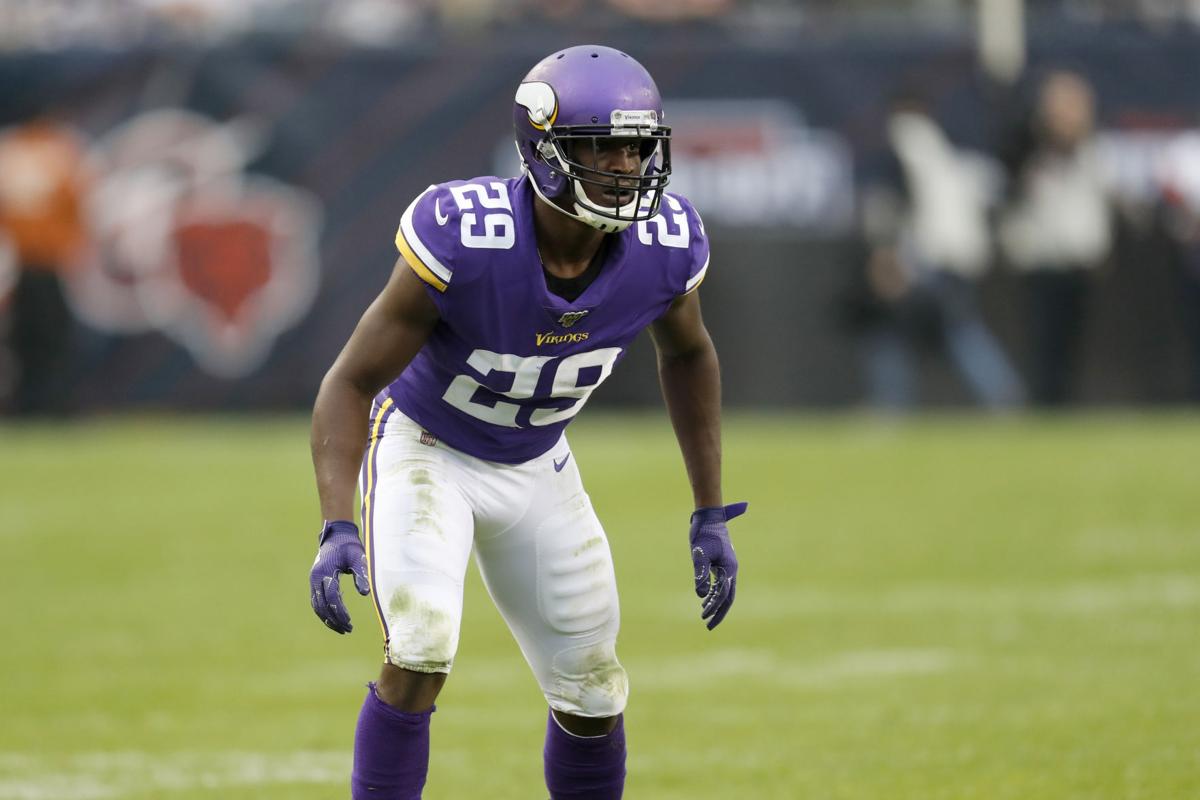 Minnesota Vikings cornerback Xavier Rhodes takes up his position against the Chicago Bears on Sept. 29, 2019, in Chicago.

Colts cornerback Kenny Moore II celebrates after coming up with a defensive stop against the Jacksonville Jaguars at Lucas Oil Stadium in 2018.

Minnesota Vikings cornerback Xavier Rhodes takes up his position against the Chicago Bears on Sept. 29, 2019, in Chicago.

INDIANAPOLIS — Kenny Moore II is looking forward to teaming with a new starting cornerback this fall.

Moore has been working out with three-time Pro Bowler Xavier Rhodes in South Florida, and he sees the veteran bringing a familiar brand of leadership to a young defensive backs room.

“I think it’ll be the same as whenever we had (safety) Mike Mitchell,” Moore said. “He brought a lot of experience to the room, and he gave us a lot of pointers of things to look out for and things to expect. Mike Mitchell actually taught us how to watch film and how to take what we learned in the meeting room to the field each day in practice. So I think Xavier Rhodes can do the same thing.”

The Indianapolis Colts are hoping that will help the secondary move back in the right direction after breakdowns in the last month of the season heavily contributed to a 1-4 finish.

CNHI Sports Indiana’s Roster Review continues with a look at how the cornerbacks stack up this spring:

A healthy return by Moore is the single most important aspect to the cornerback group. His versatility allows defensive coordinator Matt Eberflus to be more aggressive and attack opposing offenses.

When Moore is out, the Colts tend to lay back, play more zone coverage and hope the opponent makes a mistake. With the 24-year-old in the lineup, there’s more disguise in coverages and a greater threat of a cornerback blitz.

He missed five games with an ankle injury last year and played hurt in others. Moore wound up playing just 61% of Indianapolis’ defensive snaps – down from a career-high 87% in 2018 – but he still finished with 61 tackles and added two interceptions, 2.5 sacks, a fumble recovery and four tackles for loss.

He will again start on the outside in the base defense and move to the slot in sub packages. Rhodes is slated to start on the opposite side.

The 29-year-old is coming off consecutive down seasons with the Minnesota Vikings, missing three games with injury and recording just a single interception in that stretch. He was released by the team that made him a 2013 first-round draft pick in March.

But the Colts believe they can get him back into top form. He’s reuniting with defensive back coaches Jonathan Gannon and Alan Williams, with whom he worked in Minnesota, and there’s a clear plan for his fit with the Colts.

Eberflus had the chance to coach Rhodes in the Pro Bowl, and he came away impressed.

“I was just amazed for how the guy could move for how big he is,” Eberflus said. “I mean the guy looks like a big safety (6-foot-1, 218 pounds) and he is playing corner. We just really fell in love with him. He is a physical, really good tackler, and he has played at a Pro-Bowl level. We are excited to get him back to that point.

“We certainly feel great about Jonathan Gannon and Alan Williams in the back end coaching him because they have some familiarity with him. But we are excited about where he is. We feel that – I know (general manager) Chris (Ballard) has said this as well – he has a chip on his shoulder in lieu of the circumstances, and we are excited about that. We will see where he goes from there, but let’s get him on the grass and start working with him.”

Given the amount of time Indianapolis will spend with at least three cornerbacks on the field, Rock Ya-Sin also will be a de facto starter. He’ll play on the outside when Moore moves into the slot.

Ya-Sin faced a lot of criticism during an up-and-down rookie year, but he made a solid 62 tackles and added an interception, a fumble recovery and five pass deflections. Moore already has seen improvement from the 2019 second-round pick in the virtual meeting room.

“The adversity that he was impacted with last year, he had to just keep swinging,” Moore said. “The advice I gave him last year was, ‘If you expect to be perfect, don’t even come on the field.’ There’s going to be a lot of things that happen on the field that you don’t want to happen, and that’s just the likelihood of our job to be a defensive back. There’s going to be great guys on the field, so you’ve just got to keep playing.”

Veteran T.J. Carrie brings experience in the slot and on the outside with 50 career starts over six seasons with the Oakland Raiders and Cleveland Browns. The Colts also are hoping for a second-year jump for Marvell Tell, a 6-2 former safety from Southern Cal who made 13 appearances with one start as a rookie.

Rookie Isaiah Rodgers, a sixth-round pick out of Massachusetts, figures to make his most immediate impact on special teams.

Lafayette Pitts has played in 40 games over four seasons with the Miami Dolphins, Jacksonville Jaguars and Buffalo Bills, with the majority of his playing time coming on special teams. Picasso Nelson Jr., Jackson Porter and undrafted rookie Travis Reed out of South Alabama likely will compete for practice squad spots.

This is the 11th story in a 13-part series breaking down the Indianapolis Colts' 2020 roster. The series continues with a look at the safeties.