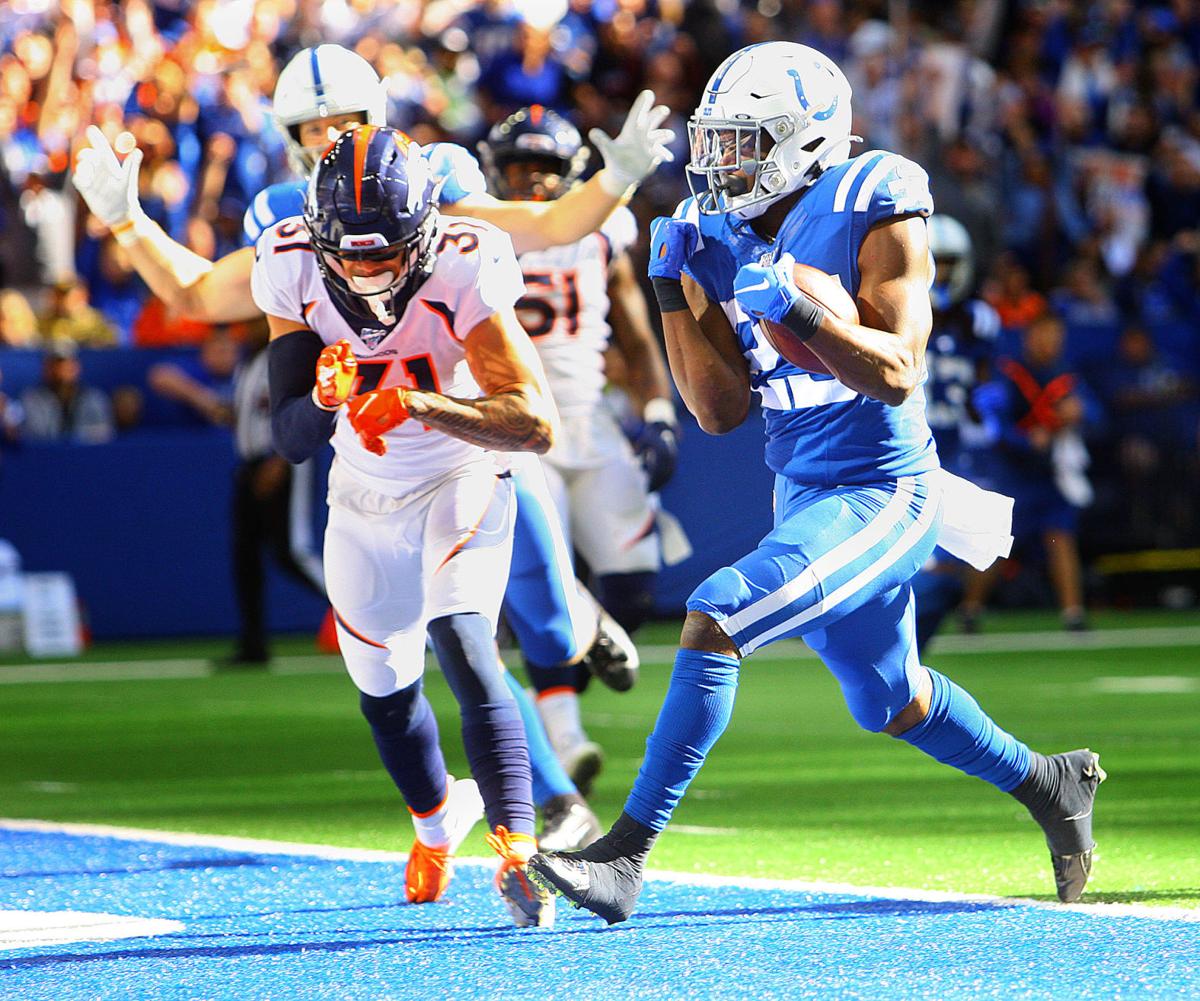 Indianapolis Colts running back Marlon Mack scores on a 10-yard run Oct. 27, 2019, against the Denver Broncos at Lucas Oil Stadium in Indianapolis. 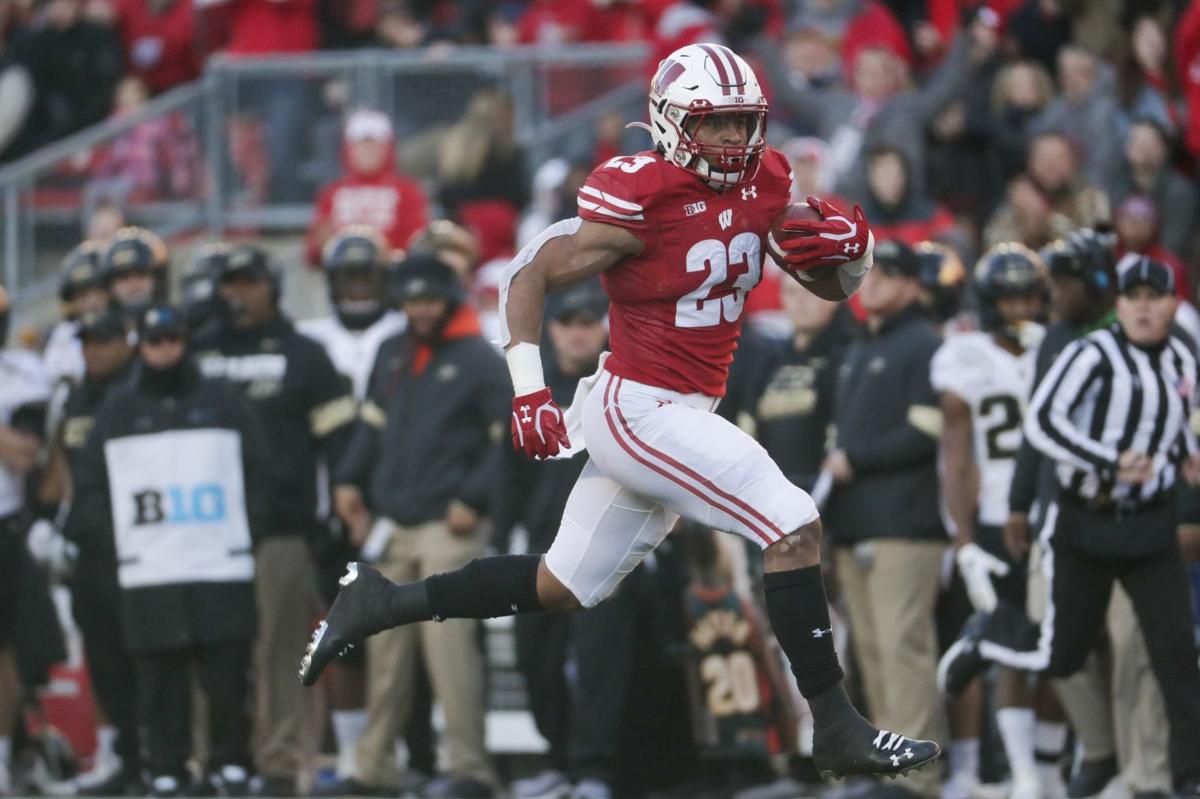 Wisconsin's Jonathan Taylor runs for a touchdown against Purdue on Nov. 23, 2019, in Madison, Wis.

Indianapolis Colts running back Marlon Mack scores on a 10-yard run Oct. 27, 2019, against the Denver Broncos at Lucas Oil Stadium in Indianapolis.

Wisconsin's Jonathan Taylor runs for a touchdown against Purdue on Nov. 23, 2019, in Madison, Wis.

INDIANAPOLIS — It’s been 13 years since Philip Rivers has been supported by a top-10 rushing attack.

In 2007, Hall of Famer LaDainian Tomlinson rushed for 1,474 yards and 15 touchdowns and the San Diego Chargers ranked seventh in the NFL with 2,039 rushing yards. The team boasted the fifth-highest scoring offense in the league (25.6 points per game) and won the AFC West with an 11-5 record.

Those are all numbers the Indianapolis Colts would be happy to replicate (or exceed) with Rivers under center in 2020.

A robust running game led by a pair of starting-caliber backs will be one of the keys to getting the team there.

“I get excited about that with our running attack combined with how good Philip is in the play-action game,” Indianapolis offensive coordinator Nick Sirianni said. “That’s obviously very exciting for us because — right? — they can’t stack the box. If they stack the box, Philip can make them pay with our receivers and tight ends. They don’t stack the box and they keep (a) two-high (safety) look, we can run the football.

“Obviously, very exciting and we become even more multiple of how we attack a defense, which is always to our benefit.”

CNHI Sports Indiana’s roster breakdown continues with a look at how the Colts’ running backs stack up this spring:

The Colts turned some heads with the selection of Wisconsin running back Jonathan Taylor in the second round.

Incumbent starter Marlon Mack rushed for a career-high 1,091 yards in 2019 and has scored 17 combined touchdowns over the past two seasons. Behind one of the NFL’s most sturdy offensive lines, Indianapolis boasted the league’s seventh-ranked rushing attack last year and was less than 100 yards shy of a top-three ranking.

But Taylor’s college production — he rushed for 6,174 yards and 50 touchdowns in three seasons for the Badgers — and big-play potential was too tempting for general manager Chris Ballard to pass on.

The question now becomes how will the carries be divided between the two stalwart rushers?

It’s too early for any specific plans to be formed, but Sirianni said the Colts view both running backs as starters.

“We know a lot of the good running teams in this league and in the past have had good one-two punches,” he said. “It feels like it’s just a one-one punch, though, because we have two such exceptional backs. We’ve seen it work in the NFL so much where you have different styles of guys, right? Both these guys can do multiple things, though.

“Jonathan is a little bigger (5-foot-10, 226 pounds) than Marlon (6-foot, 210), but they both have exceptional speed, and they both have ability to make you miss, and they both have the ability to break arm-tackles and run with power. They have some different running styles, but again they’re both complete backs. I think that’s a fantastic problem to have, is to have two guys like that you can feed the football to. It’s only going to help our running game.”

Nyheim Hines emerged last season as a premier punt returner. He scored a pair of touchdowns in a late-December win against the Carolina Panthers and averaged 20.5 yards on just six returns after taking over the role when an injury cut short wide receiver Chester Rogers’ season.

But Hines also has proven to be effective as a receiver out of the backfield during his first two seasons. He has 107 career catches for 745 yards and two touchdowns playing primarily in the hurry-up offense.

It’s a role he’s likely to continue even with Taylor and Mack taking an even greater percentage of the rushing attempts. And it’s one Rivers could more fully exploit.

Chargers running back Austin Ekeler had 92 receptions for 993 yards and eight touchdowns last year with Rivers feeding him the ball.

“Where I think Philip is really outstanding, he has this great ability to find the running back out of the backfield — whether we’re scheming for that guy or whether it just happens within a protection, where he goes through his progression and finds that back,” Sirianni said. “So I think for sure Nyheim will benefit from that.”

Former Pro Bowl fullback Roosevelt Nix was signed after being cut by the Pittsburgh Steelers to add more variation to the offensive looks. Head coach Frank Reich said he’d ideally like to line up with a two-back look 10 to 20% of the time, giving defenses another thing to prepare for during the week. Nix also was a special teams captain in Pittsburgh and likely will contribute heavily to that phase.

Third-year running back Jordan Wilkins could be the odd man out. He has averaged 5.8 yards on 111 career carries and has shown big-play ability. His 55-yard run set up the game-winning touchdown in Week 2 last season against the Tennessee Titans, but it might take some creativity to fit five running backs on the roster.

This is the second story in a 12-part series breaking down the Indianapolis Colts' 2020 roster. The series continues with a look at the wide receivers.