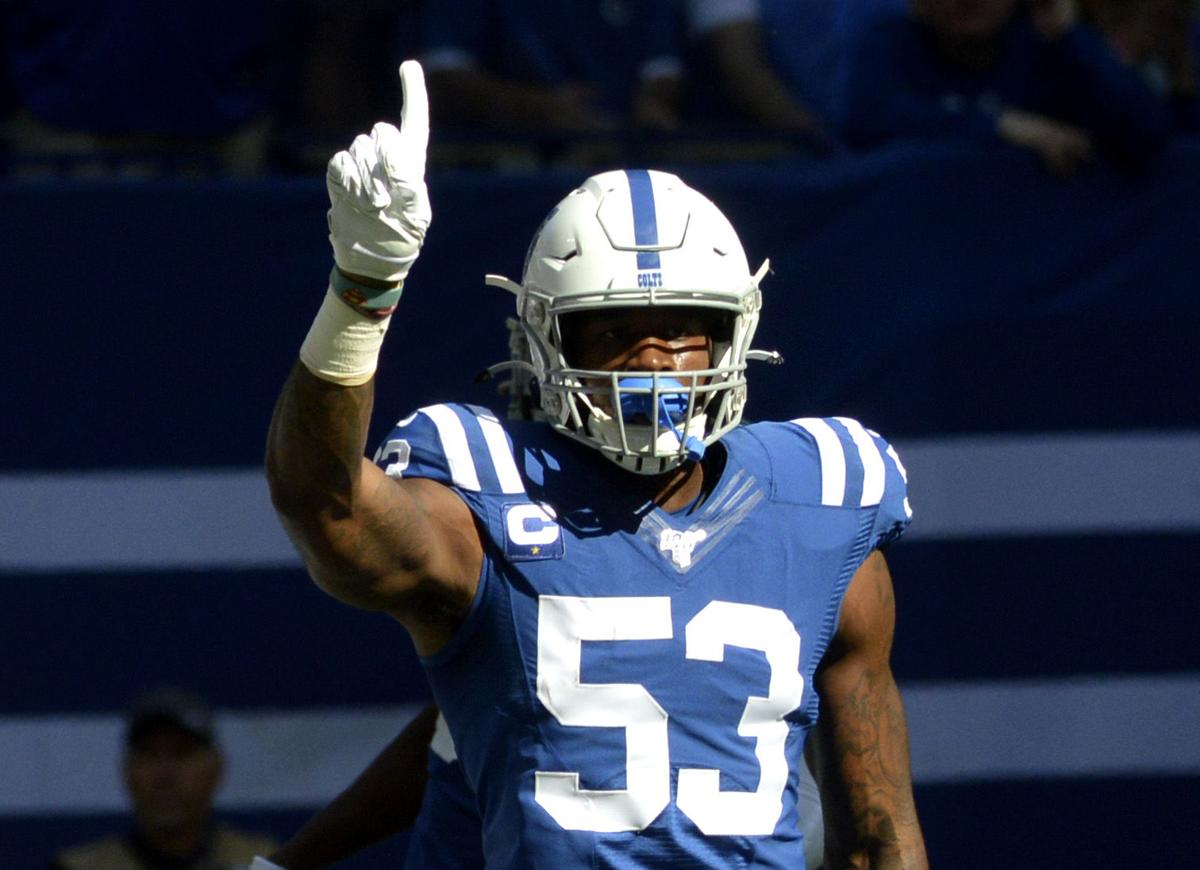 Indianapolis Colts linebacker Darius Leonard wags his finger after big stop by the defense against the Houston Texans on Oct. 20, 2019, at Lucas Oil Stadium. 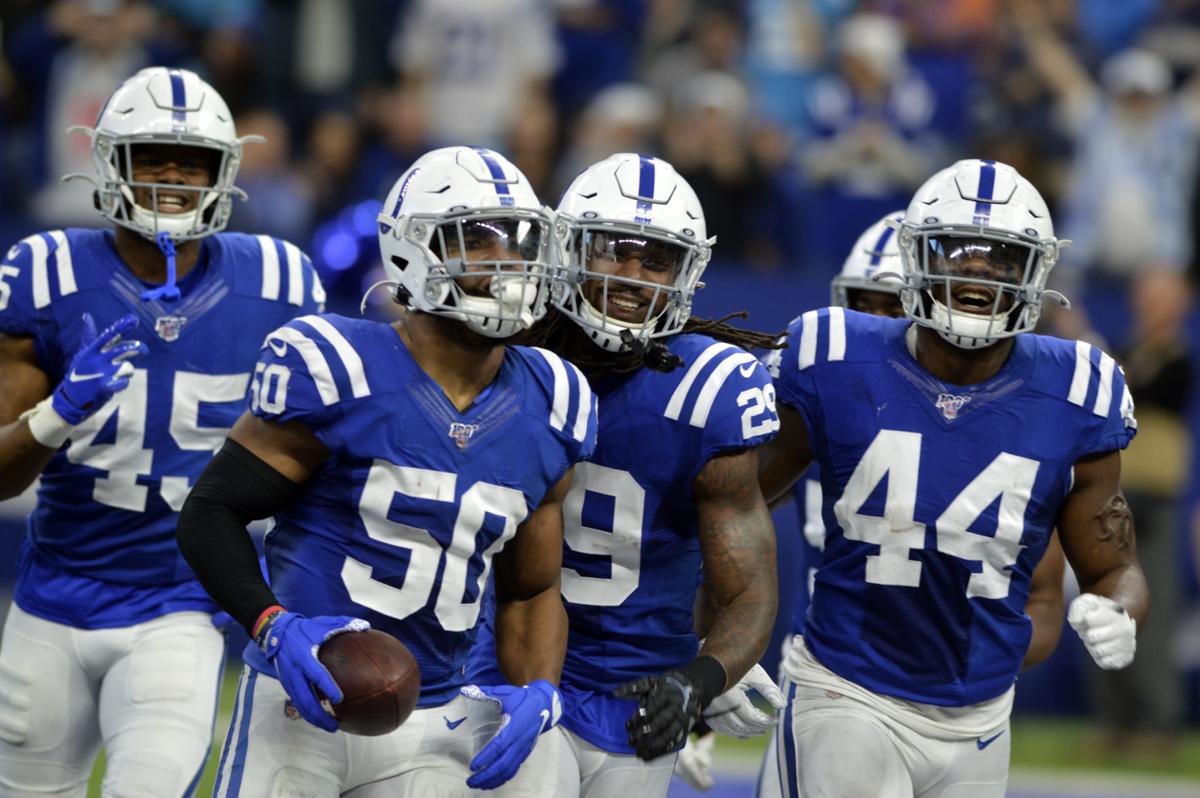 Indianapolis Colts linebacker Darius Leonard wags his finger after big stop by the defense against the Houston Texans on Oct. 20, 2019, at Lucas Oil Stadium.

INDIANAPOLIS — There aren’t many questions for the Indianapolis Colts at linebacker.

All three starters return from 2019, and there’s good depth behind them. The group is athletic and productive on the whole, with all-pro Darius Leonard leading the way.

Interestingly, the 2018 second-round pick is dealing with a shortened offseason for the third straight year. He was injured during rookie mini-camp and didn’t return until training camp that summer, and he missed all of last spring rehabbing an ankle injury.

That puts him in unique position to advise his teammates on how to handle this offseason, truncated by restrictions surrounding the coronavirus pandemic.

CNHI Sports Indiana’s Roster Review continues with a look at how the linebackers stack up this spring:

Assuming everyone is healthy, there’s no question about the names that will fill these roles.

But the exact deployment of the linebackers could change.

Weakside linebacker Leonard remains the emotional engine of this team. Despite missing three games because of a concussion, he still made plays all over the field with 121 tackles, five sacks and five interceptions. He added seven tackles for loss, seven pass deflections and two forced fumbles.

In his first game back from the concussion, Leonard sealed a 30-23 victory against the Houston Texans in October with a fourth-quarter interception of Deshaun Watson. Five weeks later, he appeared to make another game-changing play late in a 20-17 road loss to the Texans, but officials ruled he had not recovered a Watson fumble that would have given Indianapolis another chance to drive for the victory.

Big plays have marked Leonard’s first two seasons, but middle linebacker Anthony Walker actually led the team in tackles in 2019. The 24-year-old made 124 stops to go along with 2.5 sacks, an interception, a forced fumble and a pair of pass deflections.

But Walker is entering the final season of his rookie contract, and his future is unclear. He’s made steady progress through his first three seasons, starting all 16 games for the first time in 2019, and he’s formed a tight bond with Leonard on and off the field.

Still, strongside linebacker Bobby Okereke could give Indianapolis options. The 23-year-old improved throughout his rookie season and started the second half of the year.

He made three starts at middle linebacker while Walker moved to the weakside to replace Leonard, and he often found his way on to the field in place of Walker in obvious passing situations. Playing 46% of the defensive snaps overall, Okereke racked up 65 tackles, two forced fumbles, one fumble recovery and a pair of pass deflections. He also intercepted a 2-point conversion attempt against the Jacksonville Jaguars and returned it for two points.

There is some thought Okereke could replace Walker as the starting middle linebacker in 2021, and the coaches likely will look for more ways to get the rising defender on the field this season.

“Bobby is a smart player,” Leonard said. “He’s like a sponge. Once you tell him one thing or how to do something, he’s going to fix his mistakes. We were actually talking (earlier this spring). We were showing a play (in a virtual meeting) where he got beat in practice and coach corrected him in practice. Then playing against – I think it was Jacksonville — he got his pick-(2).

“It was the same exact play that he messed up in practice, and he got it right in the game. A guy like that who can just fix a problem right there and never have a problem again, that’s the type of guy we need to have. He’s going to be a great player, and I think he’s going to make a lot plays for us.”

Matthew Adams began 2019 as the starting strongside linebacker and played a valuable role on 72% of the special teams snaps. He’s a strong tackler with a bully mentality who also can fill in at middle linebacker as needed.

E.J. Speed impressed with his athleticism and instincts as a rookie and can play all three linebacker spots. But he saw action on just 33 defensive snaps last year and 36% of the special teams snaps.

Zaire Franklin did not play a defensive snap in 2019, but he was involved in 82% of the special teams action and appeared in all 16 games. Rookie Jordan Glasgow, a sixth-round pick out of Michigan, could compete for a similar role this summer.

Skai Moore spent most of last season on the practice squad and appeared in just one game, playing seven snaps on special teams. Undrafted rookie Brandon Wellington out of Washington likely will compete for a practice squad spot.

This is the 10th story in a 13-part series breaking down the Indianapolis Colts' 2020 roster. The series continues with a look at the cornerbacks.