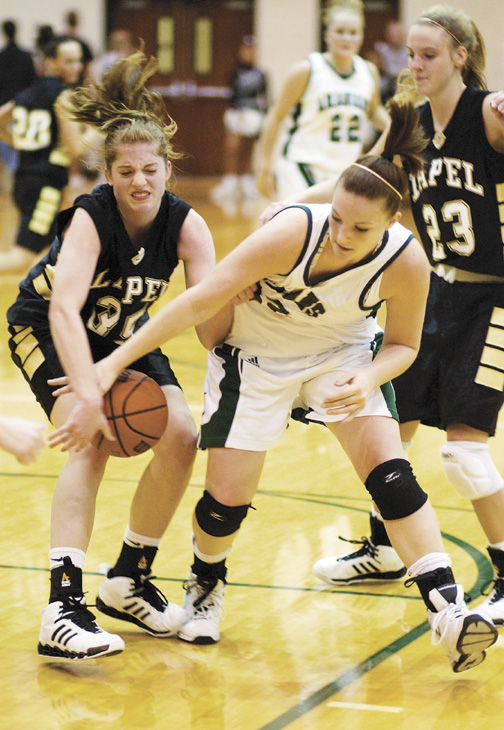 Lapel's Kayla Skaggs collides with Pendleton Heights' Lindsey Beisser as they both go for a rebound Thursday as the Lady Arabians hosted the Lady Bulldogs. Skaggs was called for a foul over the collision. 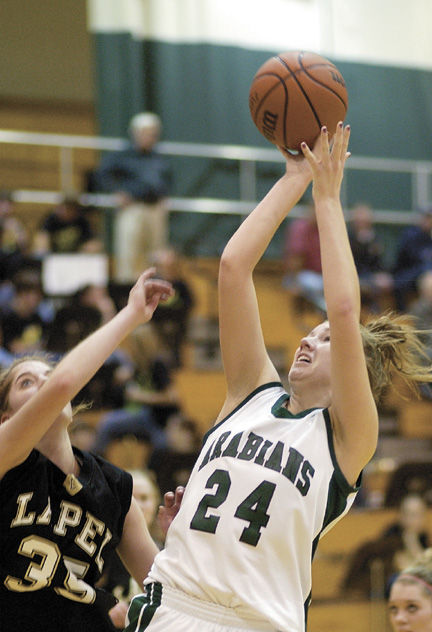 Lapel's Kayla Skaggs collides with Pendleton Heights' Lindsey Beisser as they both go for a rebound Thursday as the Lady Arabians hosted the Lady Bulldogs. Skaggs was called for a foul over the collision.

PENDLETON — After scoring just 11 points and trailing by 11 points at the half, the Pendleton Heights Lady Arabians came out in the second half and scored 43 points and claimed an 11-point victory Thursday. Senior Kristen Mahoney scored 20 points and grabbed six rebounds to help the Lady Arabians to a 54-43 victory over Lapel. Mahoney scored 14 of her 20 in the fourth quarter, including going 8-for-8 from the foul line. Pendleton Heights coach Sherri Doud said the halftime adjustment was to run a more patient offense. “In the first half, we weren’t making Lapel play defense for long spurts of time at all,” Doud said. “This was a game where we felt like we needed to be a bit more patient offensively. The kids did a better job of looking to get the ball into the areas where we know we can score.” After playing an 8-8 first quarter, the Lady Bulldogs opened up the game in the second quarter, outscoring Pendleton Heights 14-3. Lapel went on a 14-0 run to start the half, and Pendleton Heights didn’t get their first points of the quarter until junior forward Taylor Miller converted a three-point play with under a minute to play. The Lady Bulldogs went into the half leading 22-11. But the second half was a completely different story. The Lady Arabians came out of halftime and went on a 13-1 run to start the third quarter, giving them a 24-23 lead. The Lady Arabians would get two 3-pointers from Miller and one from sophomore guard Lacey Martin in the third quarter, but Lapel’s Elizabeth Jennings scored six down the stretch to give Lapel a 31-27 lead going into the fourth quarter. The fourth quarter belonged to Pendleton Heights, and mainly Mahoney, whose three field goals and eight free throws helped the Lady Arabians cruise to a 54-43 win. Doud said having so many different scoring options makes it hard for the other team to key in on one player. “I know we’re hard to prepare for because we have four or five players capable of double figures,” Doud said. “It’s always someone different scoring the big points.” Lapel coach Kevin Brattain said despite the loss, he thought his team played well for most of the night. “We played really well for three-and-a-half quarters, and we got to build on that and go on,” Brattain said. “You can’t question our kids effort tonight, you just got to give Pendleton credit.” Aside from Mahoney’s 24, the Lady Arabians got 14 points and five rebounds from Miller and eight points from Martin. Jennings led Lapel with 19 points and 10 rebounds, while sophomore Courtney Prater added 12 points and nine boards. The Lady Arabians (5-4) will travel to Alexandria to take on the Tigers on Monday. The Lady Bulldogs (7-4) will travel to Eastern Hancock on Tuesday.