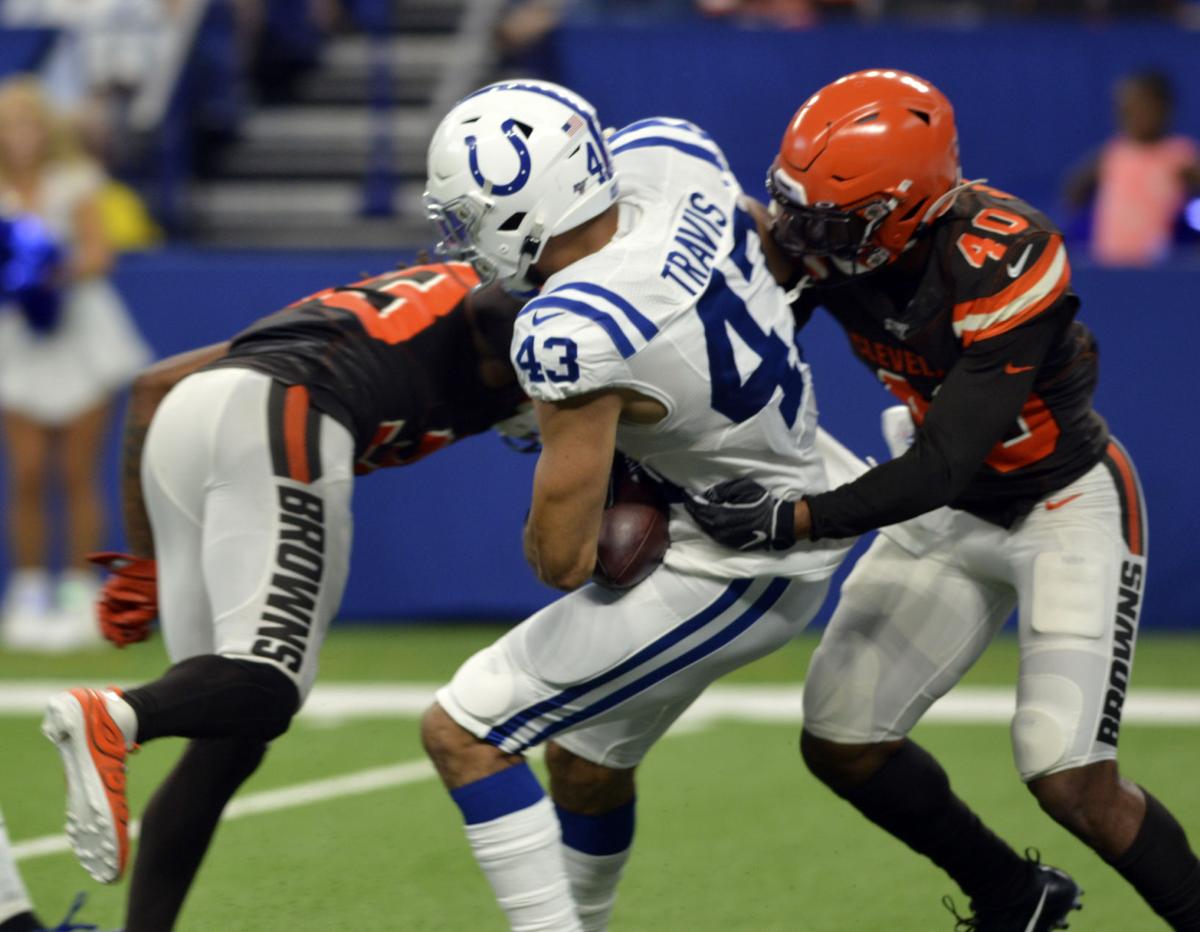 Colts tight end Ross Travis catches a touchdown against the Browns on Saturday at Lucas Oil Stadium in Indianapolis. 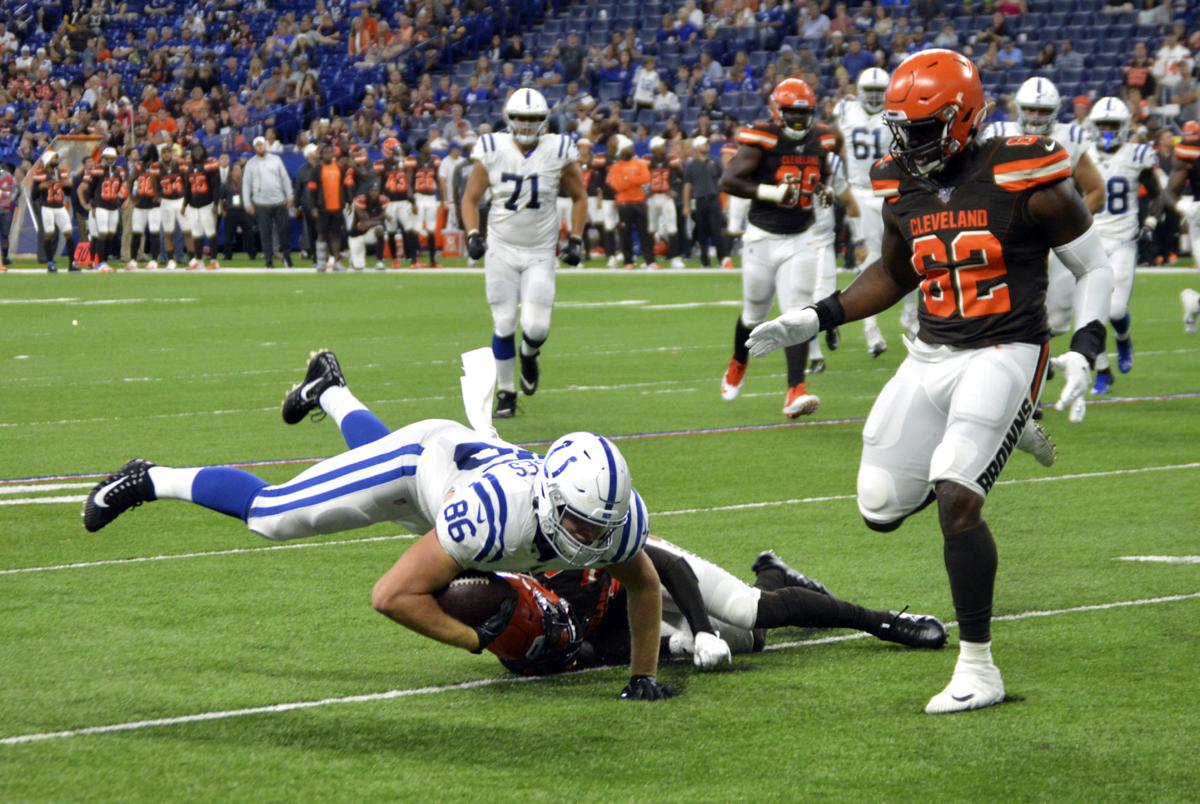 Colts tight end Hale Hentges makes a catch against the Browns on Saturday at Lucas Oil Stadium in Indianapolis. 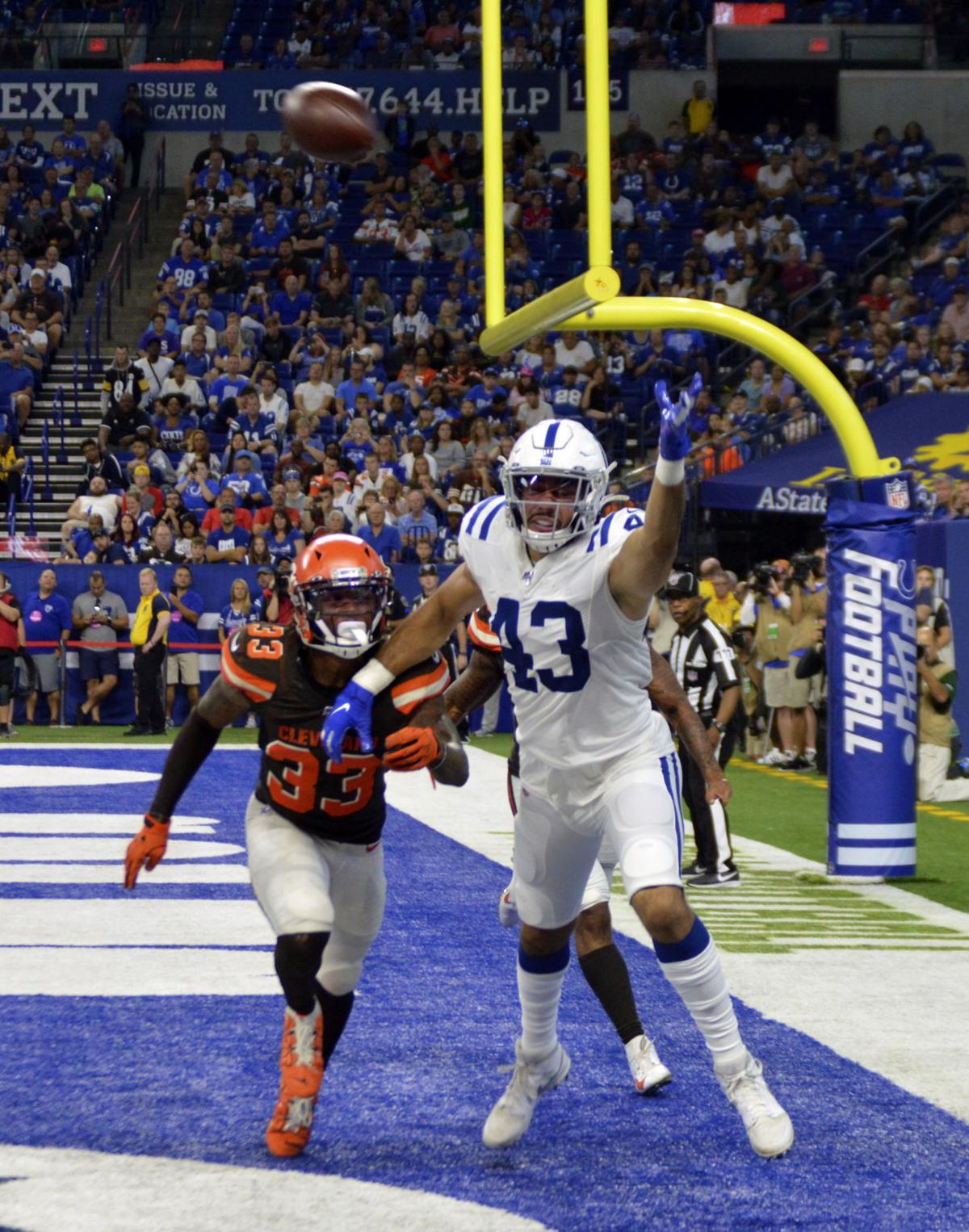 The ball sails past the outstretched hand of Colts tight end Ross Travis in the end zone against the Browns on Saturday at Lucas Oil Stadium in Indianapolis. 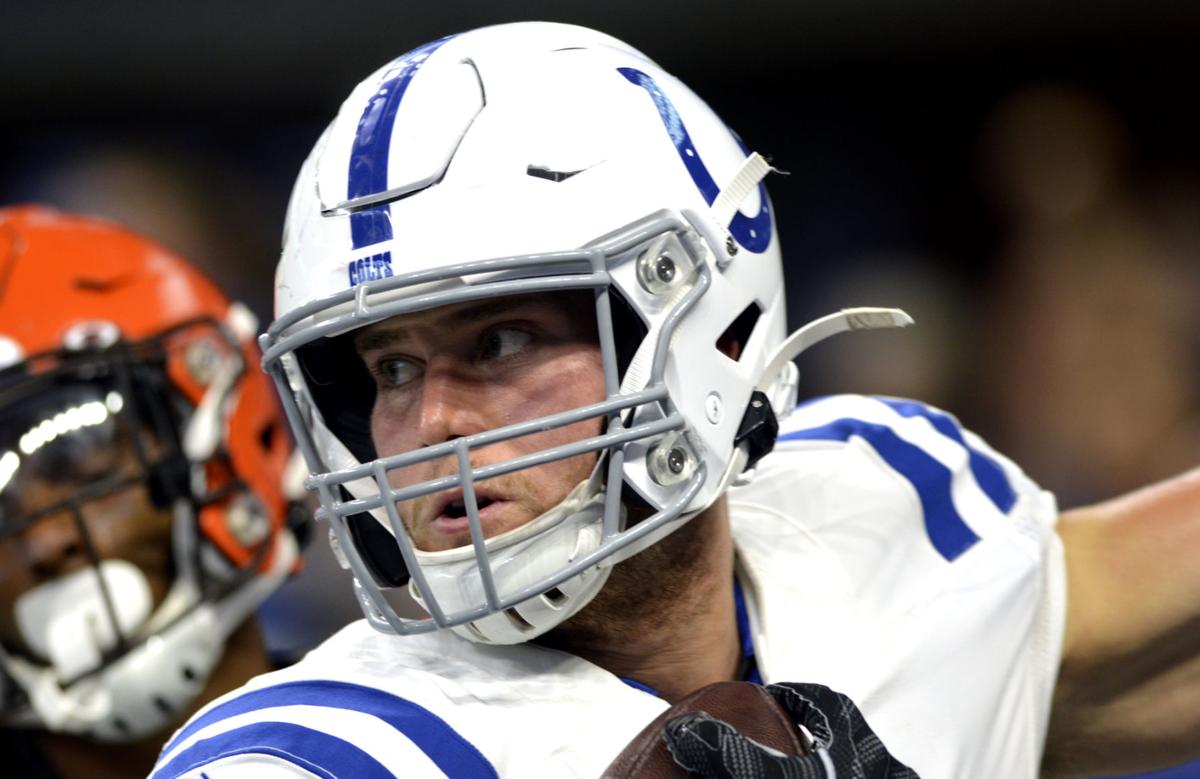 Colts tight end Hale Hentges catches a two-point conversion against the Browns on Saturday at Lucas Oil Stadium in Indianapolis.

Colts tight end Ross Travis catches a touchdown against the Browns on Saturday at Lucas Oil Stadium in Indianapolis.

Colts tight end Hale Hentges makes a catch against the Browns on Saturday at Lucas Oil Stadium in Indianapolis.

The ball sails past the outstretched hand of Colts tight end Ross Travis in the end zone against the Browns on Saturday at Lucas Oil Stadium in Indianapolis.

Colts tight end Hale Hentges catches a two-point conversion against the Browns on Saturday at Lucas Oil Stadium in Indianapolis.

INDIANAPOLIS — Deon Cain was engaged in a private conversation on the sideline Saturday night when he looked up and saw Ross Travis score on a 24-yard touchdown pass.

The second-year wide receiver dropped everything and sprinted toward the end zone to celebrate with some of his closest friends on the Indianapolis Colts.

Travis is high on that list, of course, but the athletic training staff received the first high-fives.

For much of the past year, Cain and Travis have been linked with the medical staff. Both suffered major knee injuries that cost them the 2018 season, and both already have proven to the Indianapolis Colts this preseason they can still play at a high level.

For Travis, the touchdown strike from Chad Kelly on which he split of pair of Cleveland Browns defenders was just the latest affirmation his knee is back to 100 percent.

“It’s cool to see things come full circle,” Travis said Tuesday before practice at the Indiana Farm Bureau Football Center. “I put a lot of work in during the offseason, and it’s cool to see everything come to light. You’ve gotta go out there now and forget about that and come out and hopefully do it again.”

Travis’ rise is one of the best stories this preseason in Indianapolis.

But he’s competing with another of training camp’s most fan-friendly star’s for what’s likely the final roster spot remaining at the tight end position.

Jack Doyle, Eric Ebron and Mo Alie-Cox are locks to make the team assuming they stay healthy. That leaves Travis and undrafted rookie Hale Hentges battling for a job.

It’s a familiar feeling to Hentges, who spent the past five years competing with the nation’s best college football talent at Alabama.

“That’s something that’s extremely valuable as a young player, just being in there and thinking, ‘I might not be the strongest, might not be the fastest, but here’s the things I can control,’” Hentges said. “I have to make sure my technique’s right, my assignment’s right, my leverage is right, all those things are right. And that’ll help you try to get an upper edge if you feel somewhat disadvantaged.”

Many, including the veteran himself, already have drawn comparisons between Hentges and Doyle — who became a Pro Bowler as an undrafted free agent out of Western Kentucky who was cut following his first training camp with the Tennessee Titans.

Travis is a former basketball player from Penn State who has 10 career receptions for 91 yards in parts of two seasons with the Colts and Kansas City Chiefs. He learned under one of the NFL’s best tight ends, Travis Kelce, as a rookie and has spent time in past offseasons training with Hall of Famer Tony Gonzalez.

The tight ends couldn’t be more different on the field, and it makes the choice ahead of Indianapolis’ decision makers extremely difficult.

“Really, we look at it as two different positions — not completely, but pretty much,” Colts head coach Frank Reich said. “… That’s a mix that Chris and I talk about a lot when it comes down to roster spots and how that all plays out. They both look good.”

Travis’ touchdown Saturday was the highlight of a fourth-quarter rally spearheaded by Kelly in the 21-18 loss to the Browns. It was also his only reception.

Hentges was a frequent target with four catches for 34 yards — and another big play called back because of a penalty — and caught the 2-point conversion pass following Travis’ touchdown.

It’s an open-ended competition with no clear front-runner and two preseason games remaining.

On-field performance obviously will be the primary factor in the outcome. But several other elements are in play.

Injuries at the running back position could change the math on the regular-season roster, as could the status of starting quarterback Andrew Luck. Emphasis on style of play and the early season schedule also will factor into which type of tight end the coaching staff favors.

Long and athletic or steady and dependable?

“There’s no reason to try to decide that right now,” Reich said. “They both have continued to be consistent, steady, good progress. Some of those decisions get made on health of the roster, health of everybody, what we’re planning on doing offensively, what are we planning on emphasizing? And (general manager) Chris (Ballard) has to manage everything else, all the other roster considerations.”

Travis and Hentges mostly block out that noise.

It’s an interesting head-to-head competition. There’s likely room for just one of them on the roster, but their roles are so different it’s difficult to compare.

Hentges is the better blocker. Travis is more likely to make a big play. Both have put out tape that shows they can help the team win games.

There’s something to be said for Hentges’ decision to join the Colts — with an established pair of veteran tight ends — when he found himself with any NFL destination of his choice.

That competitive fire is evident in everything the 6-foot-4, 245-pounder does.

“There’s a lot of things I can get better at,” Hentges said. “But I’ve been pleased so far with just the work and effort that I’ve done, especially in training camp and the first two preseason games. I’ve got a long way to go, but I’m happy with the start.”

There’s also something to be said for Travis’ perseverance.

He and Cain worked long hours with no other players in the building to get to the point where they could be offensive weapons for Indianapolis again.

And Travis isn’t about to let that hard work go for naught.

The 6-foot-6, 248-pounder believes his skill set is unique on the roster.

“I’m not thinking about any of that (roster mechanics),” Travis said. “I’m thinking about going out there and doing what I do. Obviously, yeah, it’s a competition at the end of the day, but I see myself differently from all the tight ends in the room. I have a different frame, I’m fairly athletic and I’m just used different. So I’m not comparing myself to anybody, just focusing on me.”